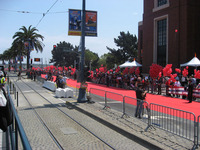 The best thing about the All-Star Game was that it truly WAS an extravaganza. Outside AT&T Park, the red carpet for the players’ parade seemed to stretch for miles. Inside the stadium, every single seat was covered with a 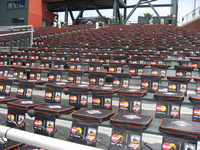 The worst part about the All-Star Game was that it was a zoo. The line to get in was one of the longest I’d ever seen, and a large percentage of fans were acting like animals.

The gates opened 15 minutes before batting practice started, so the aisle in my small section was already full when the National League starting hitting. Less than a minute later, one of the batters smacked a line drive that rolled up against the outfield wall right in front of me. It was PERFECT for the glove trick, but I was scared to go for it. The day before, security had told everyone that ball-retrieving devices were strictly prohibited, and on top of that, I’d received an “official warning” from an evil usher who was out to get me.

I looked around. He wasn’t in sight. There were a few other ushers nearby, but I knew that their view of the warning track was going to be blocked by the wall of people standing in the aisle. I swung into action and set up my glove and began lowering it over the ball. The trick failed. My rubber band was old…it was too loose…it had to be tighter to keep the ball inside. CRAP! I looked over my shoulder and saw the security supervisor marching toward me from the far end of the section. DOUBLE-CRAP!! I yanked my glove back up, tightened the rubber band, and quickly lowered it back down.

“Sir!” she yelled. “I need you to STOP doing that RIGHT NOW!”

“Ohhh…really?” I asked sweetly as the glove dangled one foot above the ball. I just needed a couple seconds to line it up and make my move.

“Your contraption needs to COME UP RIGHT NOW!!!”

“Ohhh,” I said while lowering my glove the rest of the way. “I’m sorry. I didn’t know that.”

“Okay,” I said while dropping the glove over the ball. “Here it comes. Back up. I’m really sorry about that.”

“No problem,” I assured her. “I’ll leave the ball there. It won’t happen again.”

She stood behind me, arms folded, as I lifted my glove back up. I couldn’t tell if I had the ball, and I didn’t want her to know so I moved the glove closer to the wall to block her view. After a moment, I could see that the ball wasn’t on the warning track, which meant I had it! I turned my body at the last second to shield my glove from her menacing glare and carefully slipped the ball into my pocket–at which point I heard a familiar voice begin to protest…

It was bully #1. He’d threatened me at the Futures Game and bragged about knocking people down at the Home Run Derby. Now, at the All-Star Game, he was trying to get the supervisor to confiscate my ball.

“I better not see that again,” she said to me before disappearing into the crowd.

“Awww MAN, that’s so un-FAIR!!!” said the bully, who proceeded to complain that out-of-towners get to do whatever they want because no one knows them, while HE has to deal with extra strict rules from security because he’s there all the time.

I heard soon after that he had told the supervisor that I was using my glove trick, and by the way, the ball didn’t have the All-Star logo. It was a leftover ball from the Derby, and I was extremely disappointed.

During the first hour of BP, I misplayed one ball that bounced off the slanted brick wall, and I literally got attacked while going for another. It was tossed up from the warning track, and when I tried to jump and reach for it, one fan ripped my arm down while six others lunged wildly and knocked me flat on my back. No one even apologized or helped me up, and to make matters worse, I learned soon

after that the ball didn’t even have a special logo. It was a regular ball, and I decided at that moment to shut down my snagging efforts. For the first time in over 650 games, I feared for my safety. I just wanted batting practice to end so I could watch the All-Star Game and leave that stupid city in one piece.

Both All-Star squads took a planned break for their team photos, and then the American League started BP. The stadium was packed, and my section was dead. I was so frustrated every time another righty launched another homer into the left field bleachers that I didn’t bother watching. I just wanted time to pass.

After BP, I caught up with Brad at the back of the right field arcade. Then, since I had some time to kill before the contrived Willie Mays celebration, I made a point of taking photos of fans representing teams from every division:

After suffering through the worst batting practice of my life, it was truly uplifting to see so many fans of so many different teams all coming together in one place. Of course there was a little Giants-A’s hostility, but overall, the stadium was jumping with a positive vibe. (NOTE: The Rockies fan on the upper right is named Dan. He’s the most successful ballhawk at Coors Field. Anytime you see a homer land in that wide aisle just behind the wall in straight-away left field, there’s a good chance he’ll be the one catching it.) 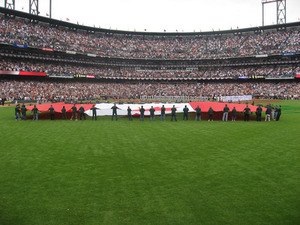 I didn’t have the greatest view for the pregame ceremonies or the game itself, but it was still a dream come true to be there. Ichiro Suzuki threw his warmup ball 10 feet over my head in the middle of the first inning, and that was the only ball that came within 100 feet of me all night. It was pathetic, and yet there was still some fierce jockeying for position during the game.

When David Ortiz came to bat in the top of the first, bully #1 stood in the tunnel between sections 143 and 144. It was the perfect spot to snag a home run, so naturally I got out of my seat and joined him…not to get in his way, but merely to prove a point.

The supervisor raced over, walkie-talkie in hand, and shouted, “I NEED YOU IN YOUR SEAT RIGHT NOW!!!!!”

Naturally, she was only shouting at me, so I pointed to the bully and calmly said, “If he gets to stand here, then I should get to stand here too.”

She sent us both back to our seats.

When Barry Bonds stepped up to the plate in the bottom of the first, both bullies got up and stood behind their front-row seats, just a few feet to my left. I got up too, prompting the supervisor to rush back to my section and ORDER me to sit down.

I gave a little head tilt toward the bullies and said, “If they get to stand up, then I should too.”

She made us all sit down, and they were fuming.

Ichiro finished 3-for-3 and hit the first inside-the-park homer in All-Star Game history. He won the MVP award, and the American League won the game. Again. The National League nearly came back in the bottom of the ninth, and it’s just as well that they didn’t because I had a flight to catch.

• 475 consecutive games with at least one ball

• 642 lifetime balls outside of New York