Let me start with a photo and then give you a little context: 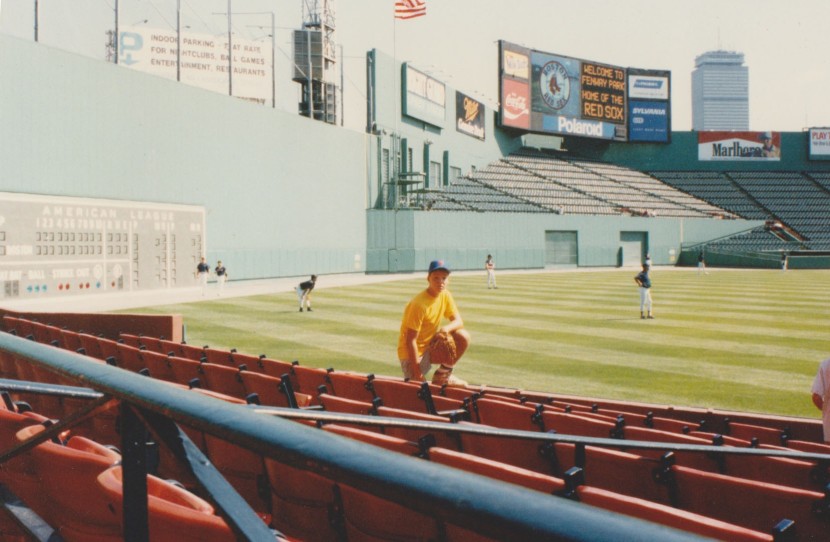 See that dweeb in the yellow shirt? That’s me at the age of 13. I don’t remember what my lifetime baseball total was at the start of the day, but I can tell you this: one month later I snagged my 18th ball at Veterans Stadium in Philadelphia, so I was still VERY new to this whole ballhawking thing.

Here’s another fun fact: prior to this game at Fenway, I’d only been to Shea and Yankee, so this was my first time visiting a major league stadium outside of New York City.

I managed to snag three baseballs during batting practice, mainly due to the fact that I got to enter the stadium extra early . . . thanks to these guys:

In the photo above, that’s my dad on the left. The gentleman on the right — his longtime friend Harry Dickson — was super-connected in Massachusetts and knew everyone at the stadium. The fact that he was Michael Dukakis‘s father-in-law might’ve had something to do with that, but enough about politics. Harry got us inside early, arranged for us to hang out in a suite for the entire game, and even took me up to the press level.

Here I am getting to operate the electric portion of the Green Monster scoreboard DURING THE GAME: 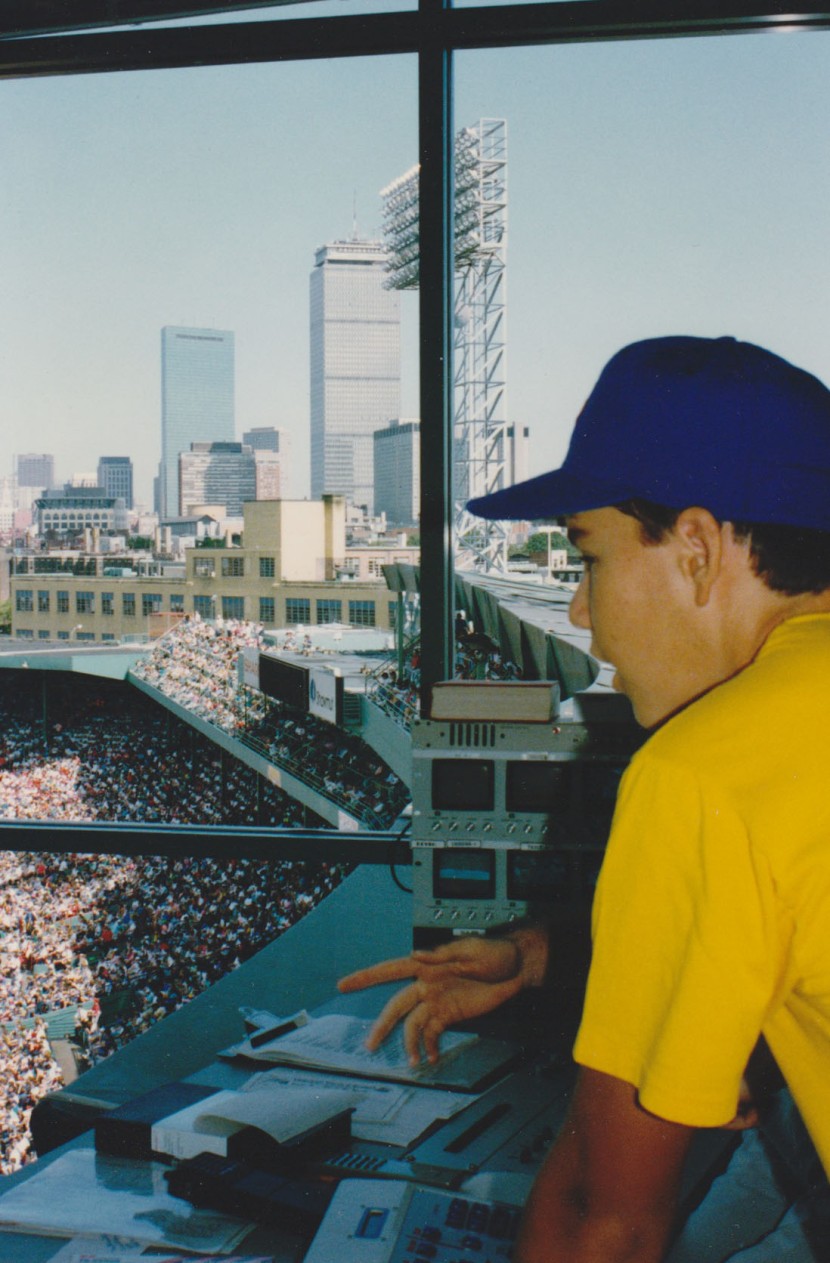 In the photo above, do you see the small boxlike thing at the bottom with square buttons on it? (It’s just to the left of my elbow.) That was the machine that controlled the scoreboard. When I saw the ump call a strike, I pushed a little “strike” button — and so on. No pressure. There were only 33,000 people in attendance.

Obviously I was excited to get to do that, but I hadn’t been to enough stadiums to fully grasp how excited I should’ve been. This was a once-in-a-lifetime opportunity, but stupid 13-year-old me was like, “Cool, so this is what fans sometimes get to do at baseball games.”

I wish I’d taken a photo of the scoreboard-operating machine. I wish I’d photographed the inside of the suite or at least my view from it. (It was on the first base side.) Or any of the free/unlimited hot dogs I ate. Or my mom. Or the baseballs that I snagged. But I don’t think I owned a camera back then. Documenting things was a foreign concept. I was still four years away from starting a journal, 14 years away from blogging, and 17 years away from creating my YouTube channel. Therefore the only photos I have from the stadium are the ones my parents happened to take. Thankfully this was one of them: 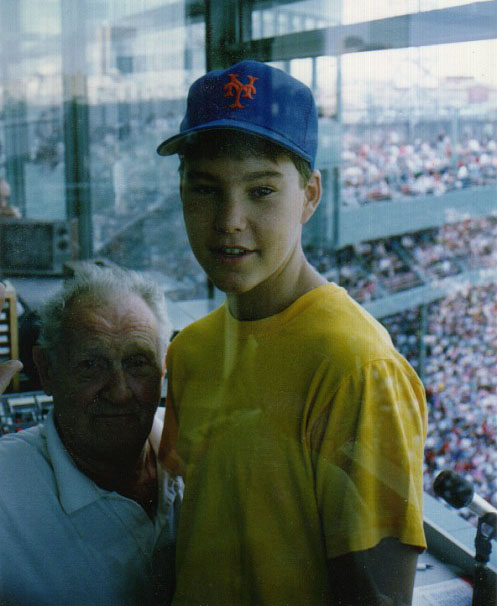 That’s me with Sherm Feller, the longtime public address announcer for the Red Sox. (I was all about the Mets back then and wore that cap everywhere.) He was nice enough to let me pose at the microphone: 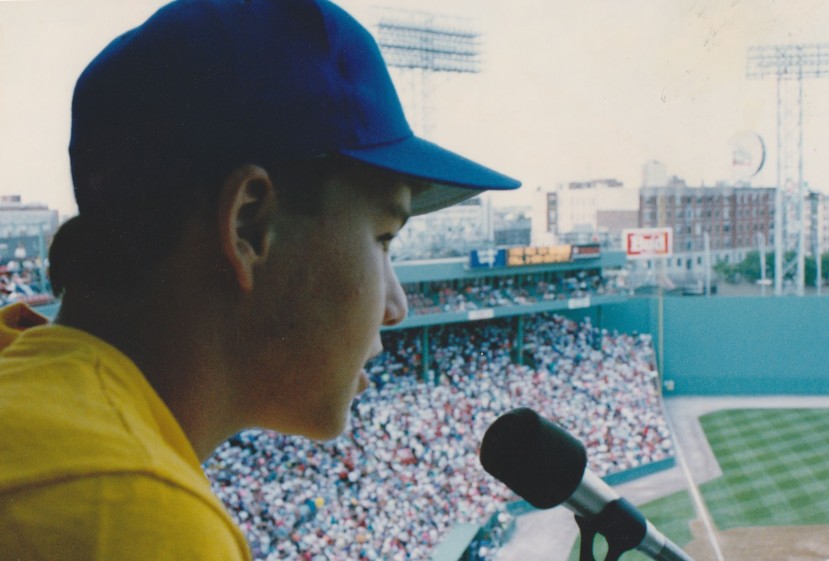 The game itself was WILD. It set a new record for the longest nine-inning game in history: four hours and six minutes, which was unheard of in the early 1990s. There was a ton of scoring, multiple lead changes, and the Red Sox ended up beating the Mariners 11-10.

For the Mariners, catcher Dave Valle went 4-for-5 with a double and four RBIs. Ken Griffey Jr. only had one hit, but it was his 40th double of the season, and he knocked in a pair of runs. Jay Buhner and Alvin Davis each had two hits; Edgar Martinez, Harold Reynolds, and Tino Martinez each picked up one hit. Omar Vizquel went hitless and some tall, lanky scrub named Randy Johnson allowed seven runs in the first two innings. I wonder what became of him. He threw really hard and was supposed to be great.

My dad’s friend really hooked it up for us. Even our exit was memorable and photo-worthy: 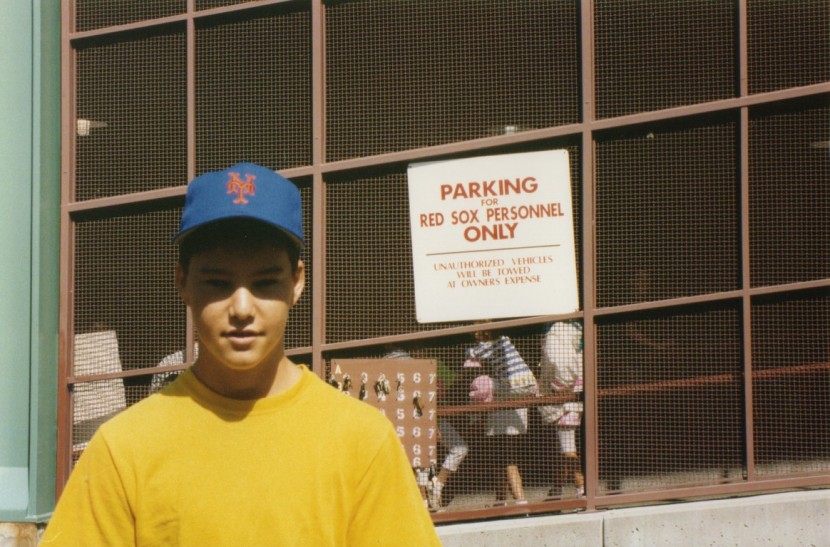 Either I *always* wore that shirt (quite possible) or my parents drove us directly to Shelter Island after the game. I say that because of this photo, taken on the ferry to the Island: 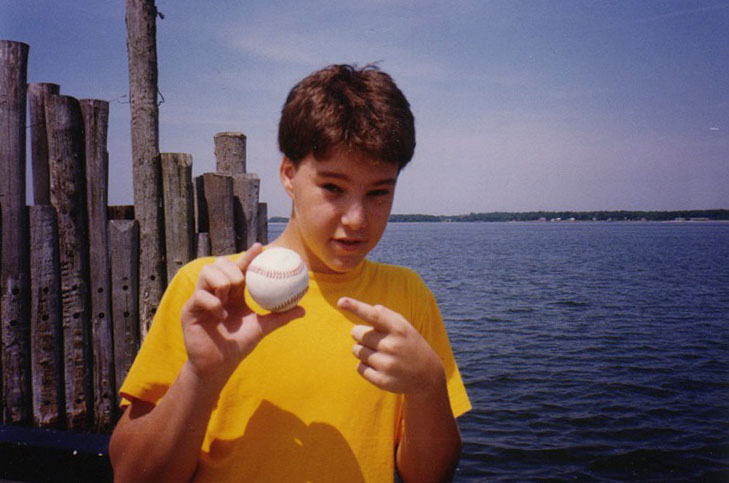 But then . . . where was my Mets cap? And why wasn’t it closer to dusk? And why was I only holding one ball instead of all three? Maybe that photo doesn’t belong here, but I like it.

I’m proud to say that 25 years later, I still have my ticket stub from this game, paper clipped to an index card with a few notes:

That’s what I used to do with my tickets back in the day, at least for the games at which something special happened.

BTW, Mike Trout was one month old when this game was played. Thanks to Twitter user @BravesStats for pointing that out.

I might post more “Turn Back The Clock” entries this winter, but for now, check out the ones I’ve already done:

And hey, don’t miss the old stadium videos that I’ve recently posted on YouTube. I only have two there for now (Fulton County and Veterans), but I have four more on the way . . .