As I mentioned in my last entry, I’ve been focusing more on YouTube lately. This season I got a ton of comments on my videos about how I should go back to Kauffman Stadium, and guess what?! I wasn’t filmed at this game. Sorry, everyone.

The reason I went to Kansas City is that I was hired to do a Watch With Zack game, and my client — a guy in his 40s named James — didn’t want to be filmed. What *did* he want? He told me just wanted to hang out and snag some baseballs with me and watch the game.

Here’s what it looked like on the drive to the stadium:

We’d picked this date weeks in advance, so it was lucky that the weather turned out to be perfect.

This was our view as we sat around and waited for the stadium to open:

In the photo above, do you see the fan with his glove on the ground? He was in the process of “stealthily” photographing me. People never think I’ll notice, but it’s actually quite obvious.

James had taken care of our tickets, including a bonus pair for the “Early Bird BP Tour.” That got us an extra hour inside the stadium, but we were confined to the seats behind the dugout. Here’s what it looked like:

Words can not describe how much I hate that netting. (Actually, wait, I’m a writer. I can describe anything, but you get the point.) 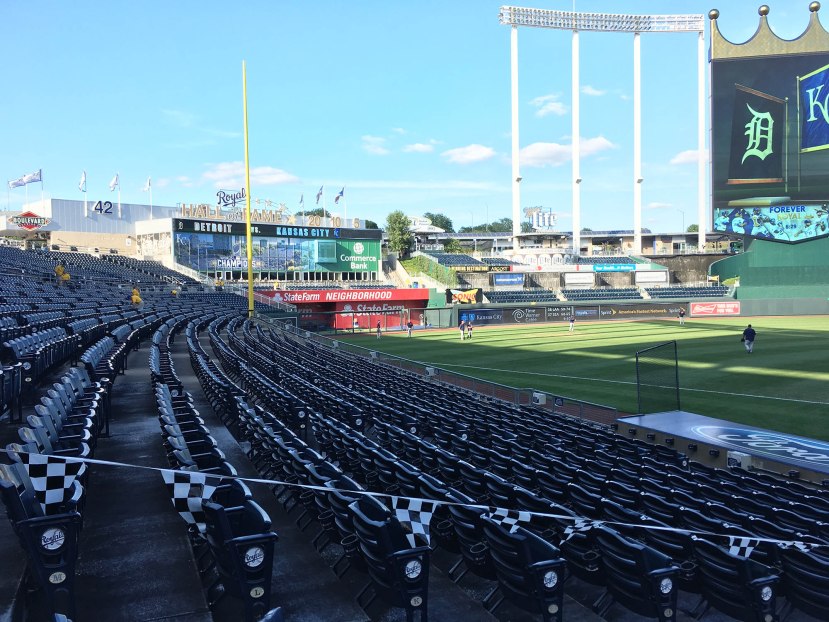 What a waste of space! Stadium security could easily move those cruddy little flags one section over or, ya know, have their ushers spread out a bit and just let fans have the entire foul line.

At one point, a left-handed batter on the Royals sliced a foul ball into those seats. I vividly remembered, on previous visits, being allowed to chase after baseballs once they landed, so I hopped the flags and went over to retrieve it: 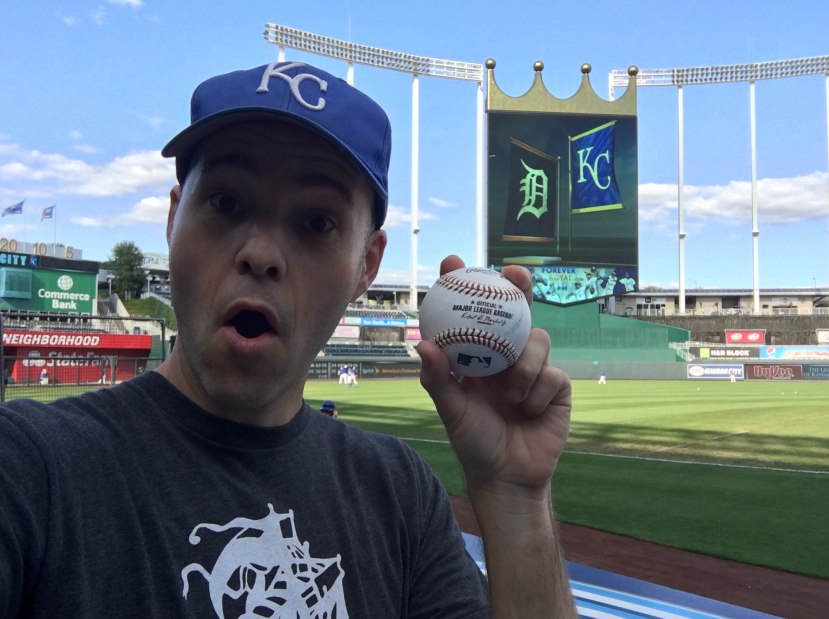 Then I was informed by an usher that I’m not supposed to do that.

With James hanging out nearby, I was able to snag two more baseballs, both of which were tossed to other people. The first one from Cheslor Cuthbert sailed just above a girl’s head and rattled around in the seats, so I picked it up and handed it to her. The second ball was thrown by Jarrod Dyson to a grown man who dropped it. Given the fact that he dropped it because (a) he didn’t have a glove and (b) was already holding a ball in his hands that Dyson had *just* thrown to him, I kept it. Well, I offered it to James, and when he declined, then I kept it. And by the way, Dyson had chucked several balls into the seats in a matter of seconds. They weren’t intended for anyone in particular, so that’s why two of them sailed right to the same guy. He didn’t care. Everyone was cool with it.

When the entire stadium finally opened, James and I headed out to left field. Tigers BP was already underway, and it didn’t take us long to get more baseballs. James got a toss-up from John Hicks, and I snagged a pair of home run balls. I’m not sure who hit them, so all I can tell you is that I grabbed the first one off the ground and caught the second one on the fly. James didn’t mind that I was snagging most of the baseballs, but I wanted to see him get a few more on his own.

For the next group, we headed out to right-center field. Here he is in the orange shirt:

For a few more minutes, there was lots of room behind us on the Pepsi Porch: 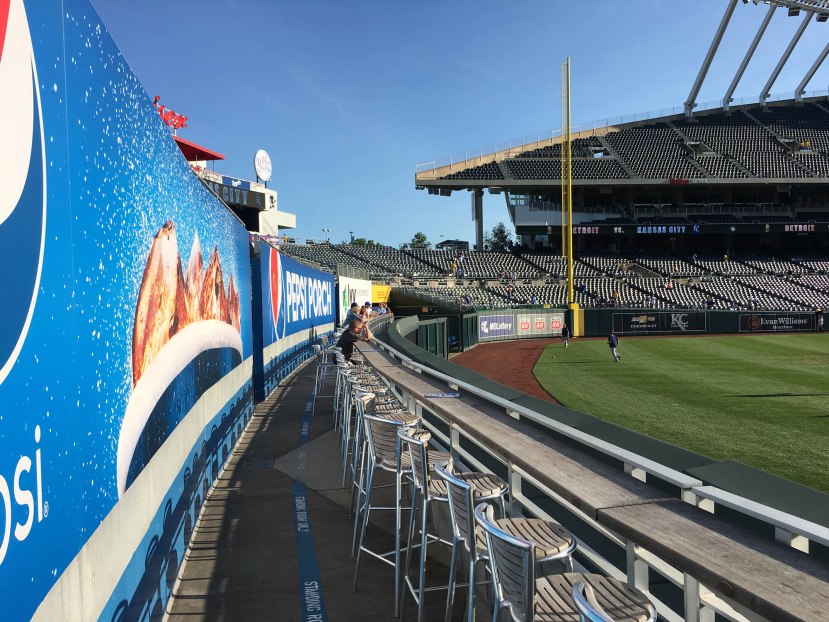 I helped James snag a toss-up from Tyler Collins, and then we split up for a bit. He stayed in right-center . . . 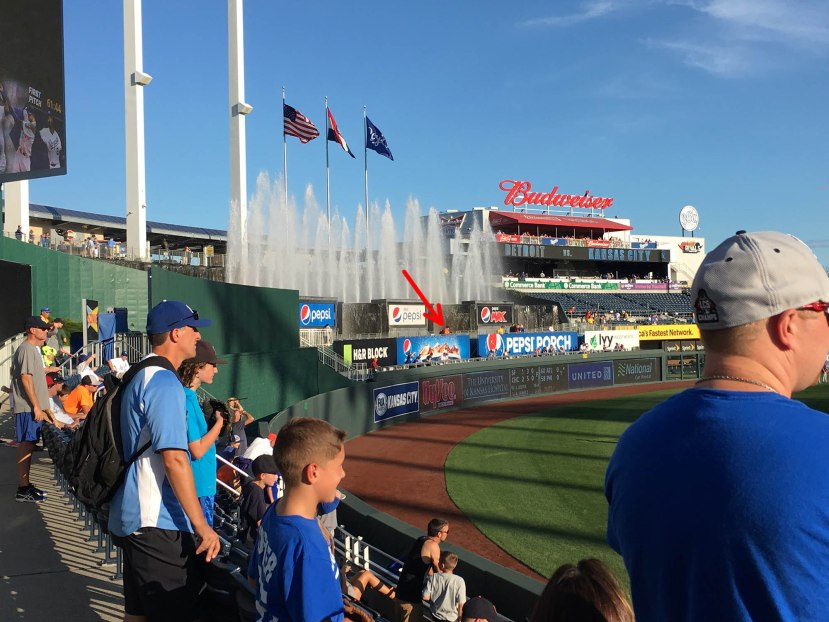 . . . and got Justin Verlander to throw him a ball, which he gave to a girl. I camped out in left field and didn’t get anything, which was no surprise. As you can see in the photo above, it was crowded.

Do you remember this photo from my previous trip to The K in 2015? I caught up with one of those kids . . . named J.T. And check it out — he’d brought his copies of all three of my books for me to sign:

It was nice seeing him again, and I’m glad to report that he snagged a bunch of baseballs.

After batting practice, James and I wandered around in search of something to eat. We decided to try some specialty hot dogs (his treat — very generous), so here’s what I got: 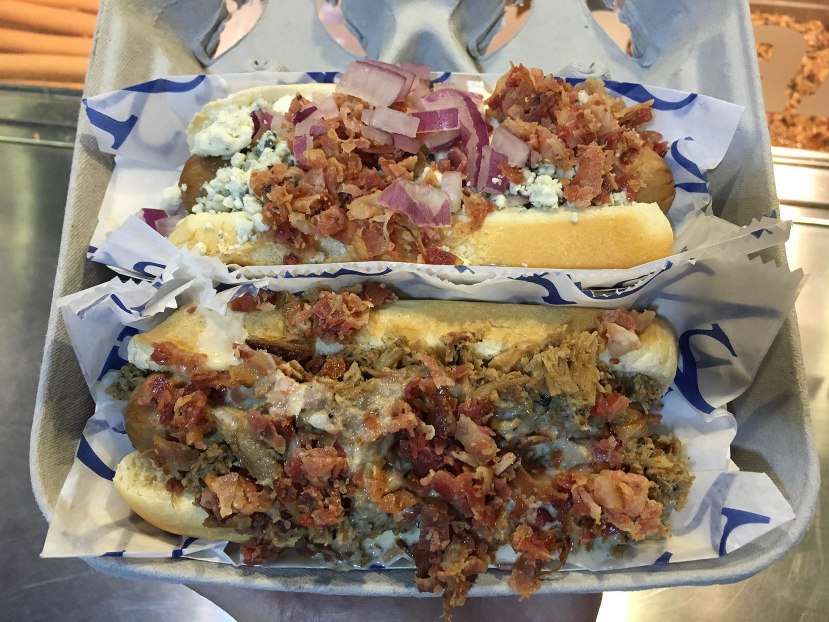 I can’t even remember everything that was piled on top — blue cheese, bacon, clogged arteries, onions, pulled pork, a heart attack, more bacon, etc. (In case you’re wondering, I gained five pounds in the second half of the season. I truly ate like a maniac, and now I’m undoing the damage. #NoRegrets)

This was our view for the game: 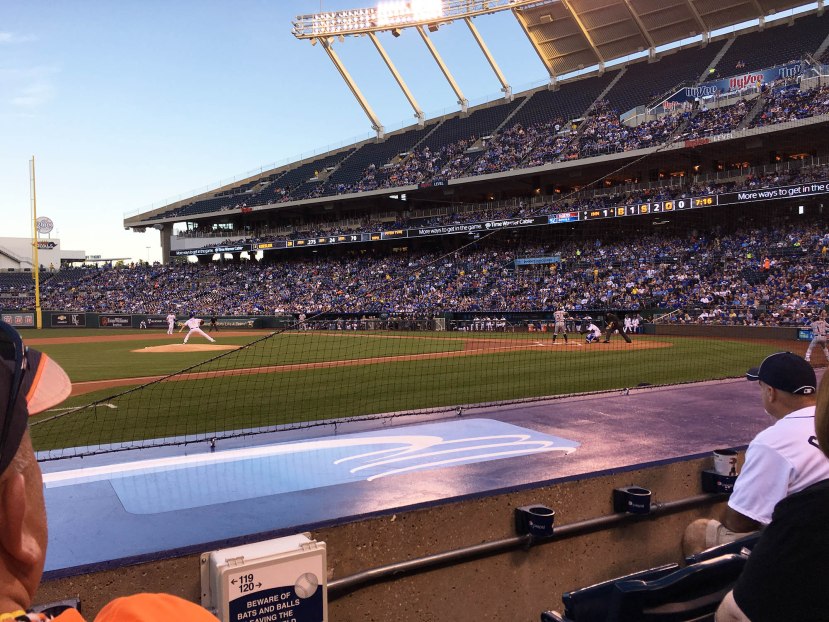 It was a great spot except for that STUPID NETTING. I actually suggested that we sit there, knowing that we’d have to deal with it.

Look who found me and hung out for an inning:

Oh, and I wasn’t done eating. Look what else I got:

See what I mean? Maniac. And by the way, those are brownies in between the strawberries.

James came through in a big way after the 3rd inning, and I was really happy for him. He got a game-used ball (the ball that ended the inning) tossed by Jose Iglesias, so the numbers had evened out after all. He had snagged four baseballs at that point, and I had gotten five. Meanwhile, look how crowded it was as the 4th inning got underway: 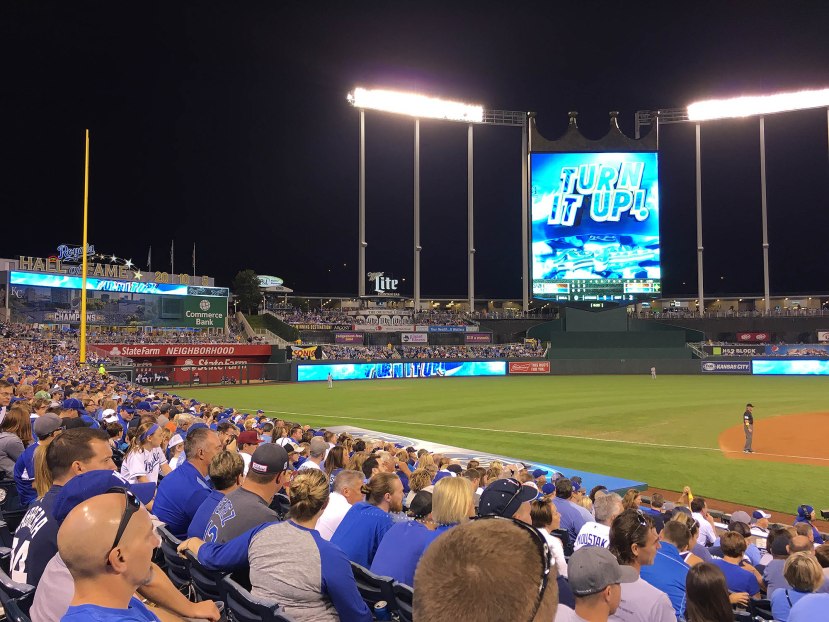 That’s what two consecutive World Series appearances will do.

In the photo above, did you notice what it says on the jumbotron? Now look at it down below:

I was appalled by the all the “GET LOUD” instructions that kept playing/blasting. There were no fewer than *ten* in that half-inning! It was so gimmicky and intrusive, often happening between every pitch. The only other stadium where my eardrums get assaulted that frequently is Citi Field.

In the 5th inning, James and I headed out to left field. I’m always happy to be in the outfield, and he was glad to walk around and check out the view from a different angle:

While we were out there, an autograph collector named Jason found me and had me inscribe a photo of us that had been taken last year:

He requested that I write “I caught Mike Trout’s 1st career home run.” Just wanna be clear about that. I don’t make a habit of signing things in a braggy way.

James and I stayed in the outfield for the rest of the game and talked baseball and hung out with various people who came over to say hello to me. I was concerned that he’d get annoyed by all the distractions (I wanted to focus on him), but he was delighted to see me do my thing. He had such a pleasant, laid-back demeanor. You know how some people make you feel that no matter what you do, it’s not good enough? James was the opposite, and I really enjoyed being in *his* world for a day.

Check out this panorama I took late in the game from deeeeeeeep right field:

Did you know that the upper fountains at Kauffman Stadium are THAT wide? Now you do.

Here’s the scoreboard with two outs in the bottom of the 9th inning: 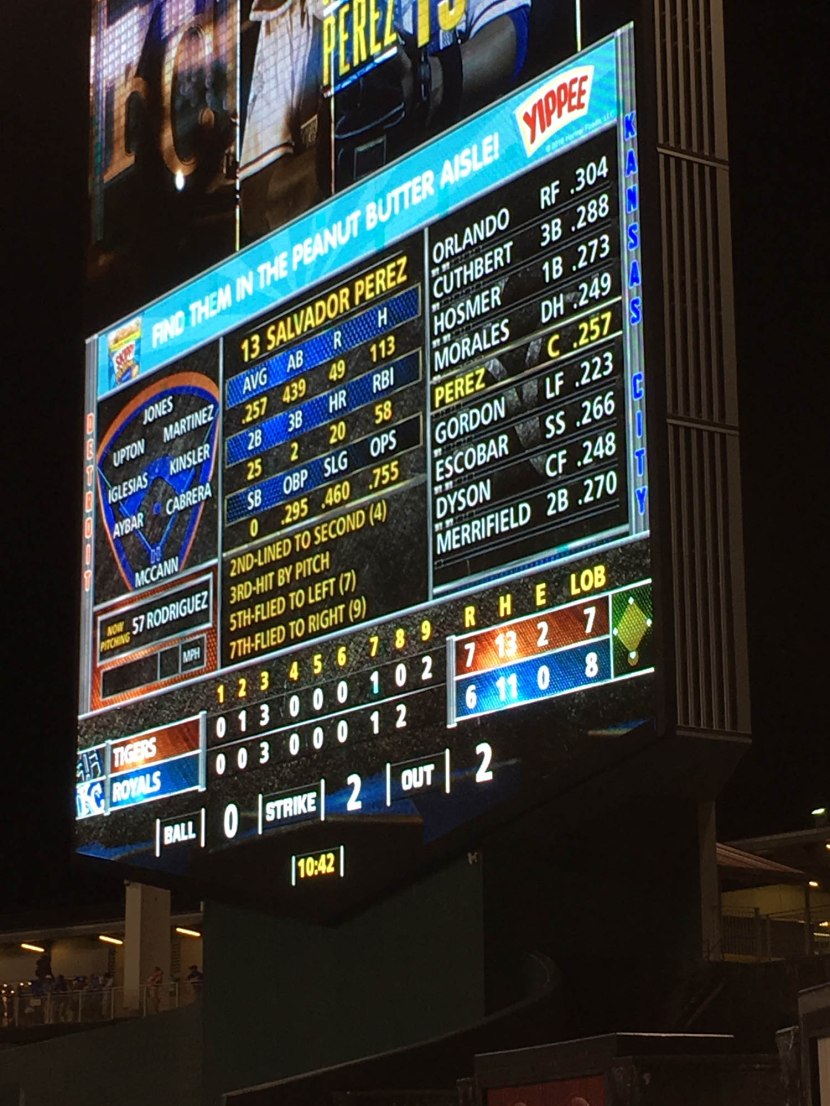 Earlier in the evening, James and I noticed that the players all had yellow/ribbons on their uniforms. That was done for childhood cancer awareness. The umpires were also wearing stuff to support the cause, and Garrett, that lucky son of a bee, got a wristband from one of them: 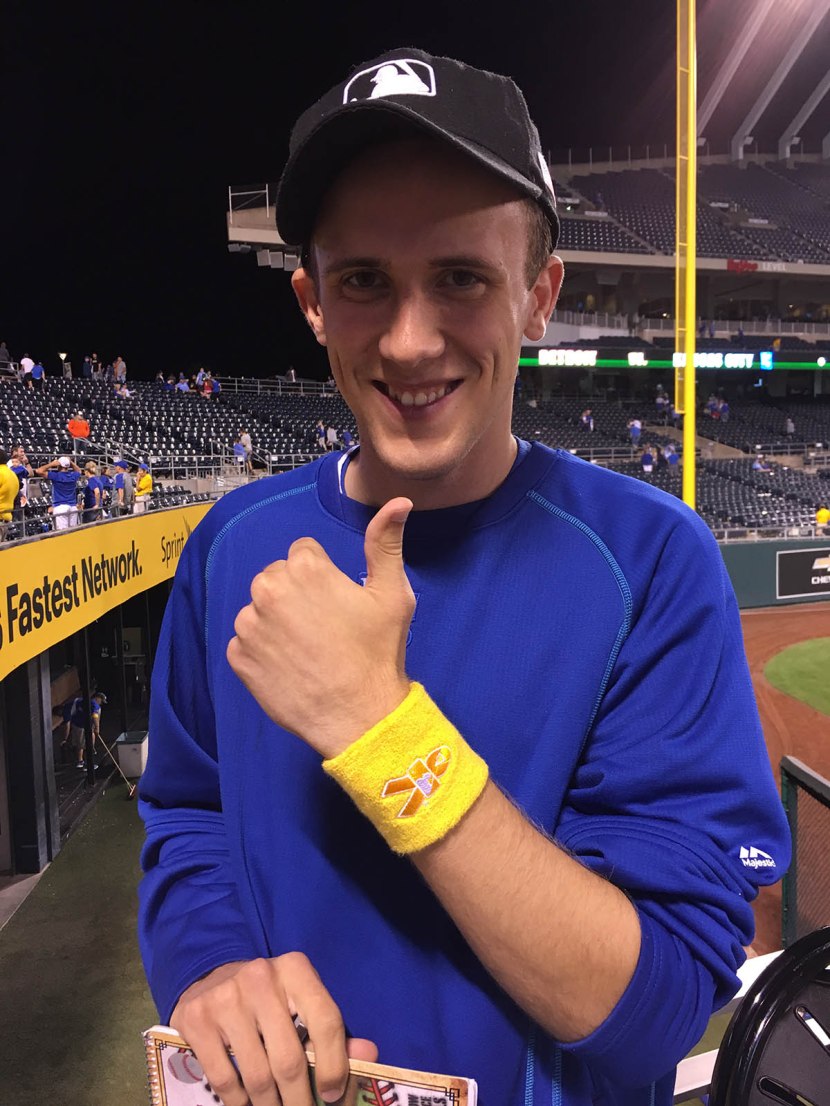 After the game, James spotted a ball here in the bullpen:

(I took that photo a few minutes after the fact, so the ball was no longer there.)

He didn’t feel the need to snag it, so he let me call out to the groundskeepers and make the play.

Here’s one more photo of the fountains before we headed out:

Here’s something that caught my eye as we approached the exit:

Here’s the stadium as seen from the parking lot:

I gave away two of my baseballs over the course of the day. (I would’ve given them all to James, but he was content with the ones he’d snagged, and by the way, he gave away two of his own.)

Here are the four balls I kept (logos on the left; sweet spots on the right):

The Tigers have marked their baseballs for years. They used to draw a streak over the logo, but now they mark the sweet spot instead. (If you want to see my entire collection of marked balls, click here.)

Early the next morning, I was awakened by some serious . . . shaking. The entire building felt like it was rocking back and forth. My first thought was that the upstairs neighbors were being rude and should control their kids, but then it occurred to me that I was on the top floor. Was their some major construction outside? It was very strange and ended within a minute, so I went back to sleep. Turns out it was an earthquake that could be felt all the way from Oklahoma!! That’s the first one I’ve ever experienced.

Several hours later, I saw this in an airport vending machine:

Way to keep it classy, Kay-Cee! (I kid, I kid. Classiness is overrated.)

Overall I had a great time. MANY thanks to James for bringing me out and also for sending this incredibly kind email three days later: 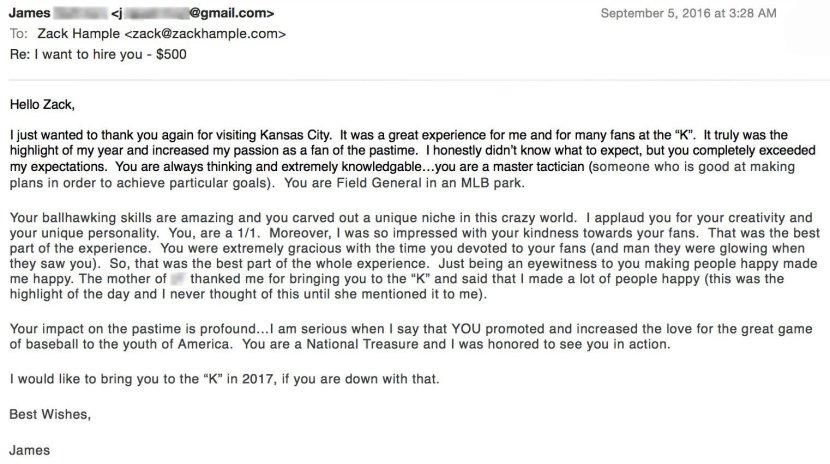 James and I are still in touch, and he’s considering being in a video next year. Who else wants that to happen? Leave a comment and let him know.

Oh, and finally, click here to see my Watch With Zack stats — kinda cool to see how the numbers have stacked up over the years.