As I mentioned in my last entry, I recently converted a bunch of old home videos from the 1990s, including several that were filmed at baseball games. I was thrilled when I stumbled upon this particular tape — 31 minutes of footage from Game 5 of the 1993 World Series — because I’d forgotten that I even had it. This blog entry has more than two dozen screen shots from that footage, so keep reading, and if you want to see my edited eight-minute version of the video on YouTube, click here.

This was my first postseason game. My dad and I drove down to Philadelphia for the day, and I was in awe of the gorgeous tickets:

Yes, that’s a screen shot from the video, and the quality sucks. Deal with it. The video isn’t worth sharing — trust me on that — but the story is still worth telling.

It should be noted that in the days before StubHub, getting tickets to premium events was extremely challenging. It often took a special connection just to have the opportunity to buy them. In this case, my dad had a close friend who ran an advertising agency with ties to CBS. Back then, CBS had the broadcasting rights to the World Series, so the agency got free tickets, and my dad’s friend passed them along to us.

As great as that may sound, I was bummed because of the weather. Look how gloomy it was as we approached Veterans Stadium: 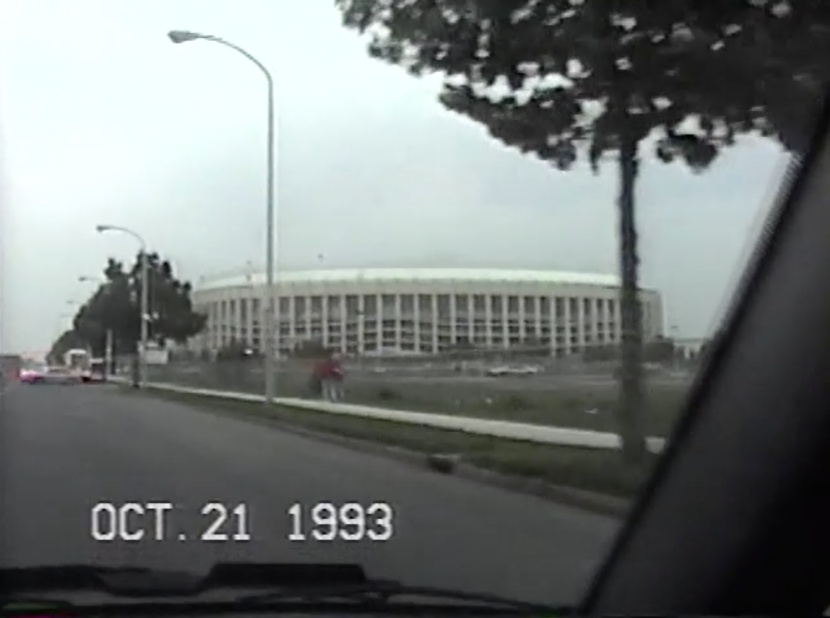 Here’s the one photo that was taken that day:

That’s me at my heaviest — roughly 200 pounds at the age of 16 — wearing a “Bucky Dent’s Baseball School” t-shirt. Because I hadn’t yet started bringing a backpack to games, I was holding my glove and Blue Jays cap in the crook of my left arm. Everything about me was soooooo awkward back then (and some things still are).

Long before the stadium opened, I approached the gates for a sneak peek inside:

“Please, please, PLEASE!!!” I thought, “let there be batting practice!!”

And then I saw this:

NOOOOOOOO!!! It wasn’t even raining! Why was the tarp on the field?!

I tried to think positive thoughts. Maybe it wasn’t going to rain. Maybe it was going to clear up. Maybe the grounds crew had put the tarp out as a precaution for an early-afternoon storm that never happened, and maybe they were about to set up the field for batting practice.

I went and found my dad, who was sitting patiently on the base of a nearby statue:

In the screen shot above, that’s him in the gray sweater, facing to the left.

Then I wandered for a bit and marveled at the ugliness of the stadium:

Here’s the stadium itself from below: 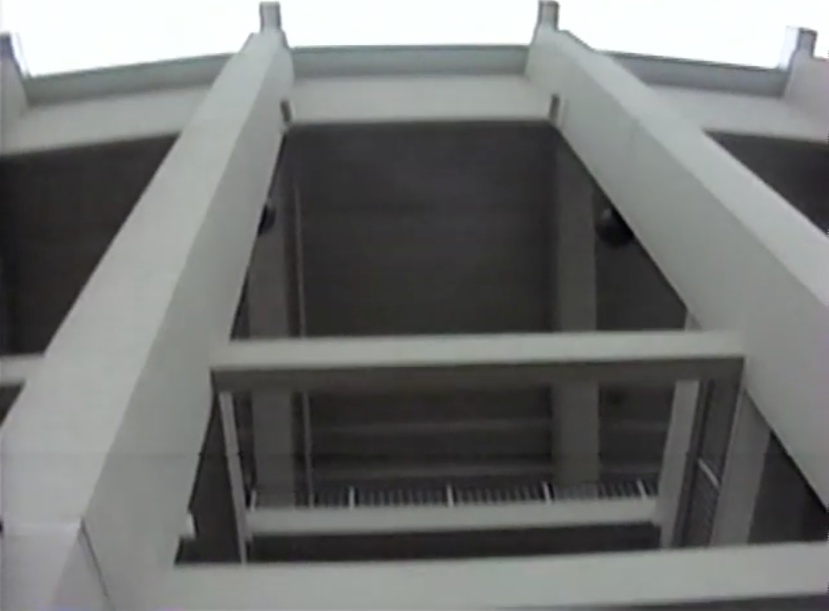 Did you notice the sky in the previous image? Yeah, it was cloudy, but it was bright. That made me extremely hopeful that there might be BP after all.

In case you can’t tell, it was raining.

Not surprisingly, when the stadium eventually opened, the tarp was still covering the field:

There’s hardly any footage from the following two hours. Very few players came out, and the stadium stayed empty for a while. All I can tell you is that I managed to get a Blue Jays player to throw me a ball shortly before game time along the left field foul line. I never knew who it was. I was just glad to extend my consecutive games streak (of snagging at least one ball per game) to 16.

The ball I got here in Philly had some unusual writing on it. You’ll see it in a bit, but first check out the 1993 World Series logo on the jumbotron:

Just before the game started, I walked through the cross-aisle in straight-away left field:

I’m sure that was a great place to catch home runs, but I didn’t really start thinking about that for another 15 years. Back in 1993, I was just happy to peek over the railing and watch Juan Guzman warming up: 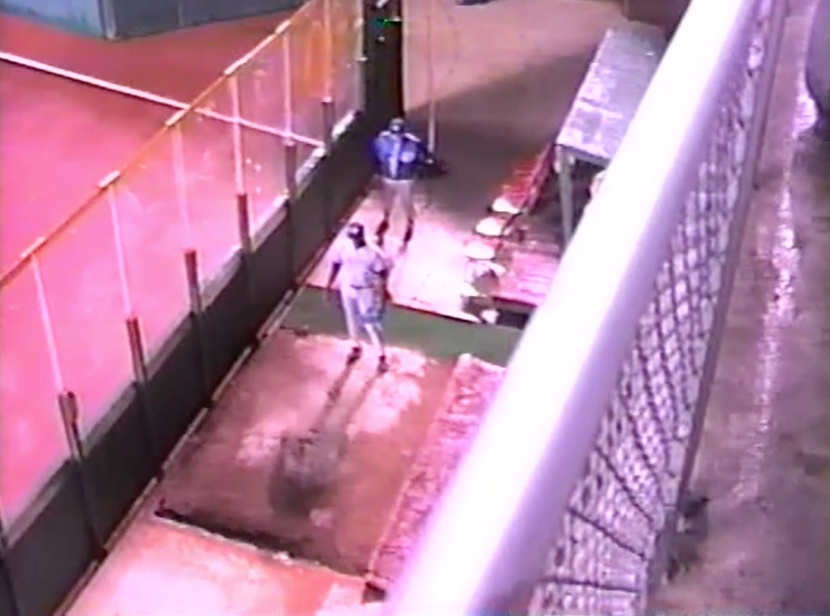 I’m sad to admit that I didn’t even try to get the ball from him when he finished. I don’t know what I was thinking, but looking back on it now, it’s no wonder I snagged fewer than three balls per game that season.

I had no agenda other than wandering and seeing what it looked like.

Then I headed back to the seats: 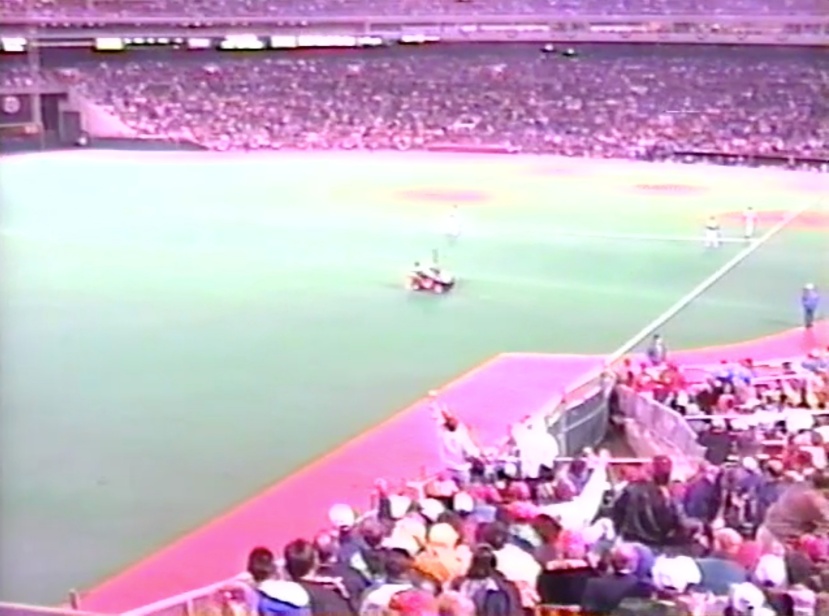 . . . but now I can point something out. Do you see the triangle of dead space in the stands along the foul line? Shea Stadium also had dead space down the lines, and so did a bunch of other ballparks. That used to be a thing — the thing being bad design. Of course, these little gaps were great for snagging baseballs. Whenever a ball ended up in there, I’d fish it out with my glove trick. Unfortunately these gaps have all pretty much disappeared. Lots of stadiums still have dead space in the outfield, but security is usually strict, and when they’re not, other fans always have retrieval devices. The point is: I had it MADE back in the day, but didn’t realize it. (In 22 years, I’ll probably reminisce about 2015 and lament about how good things were THEN. It’s a vicious cycle.)

This was my view during the game — not great, but it could’ve been a lot worse: 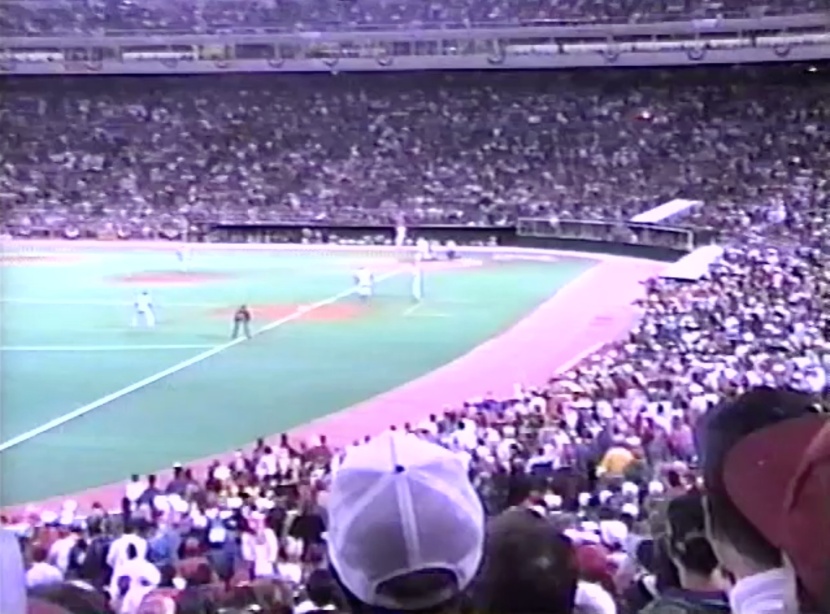 In the bottom of the 4th inning, the Phillies had a 2-0 lead: 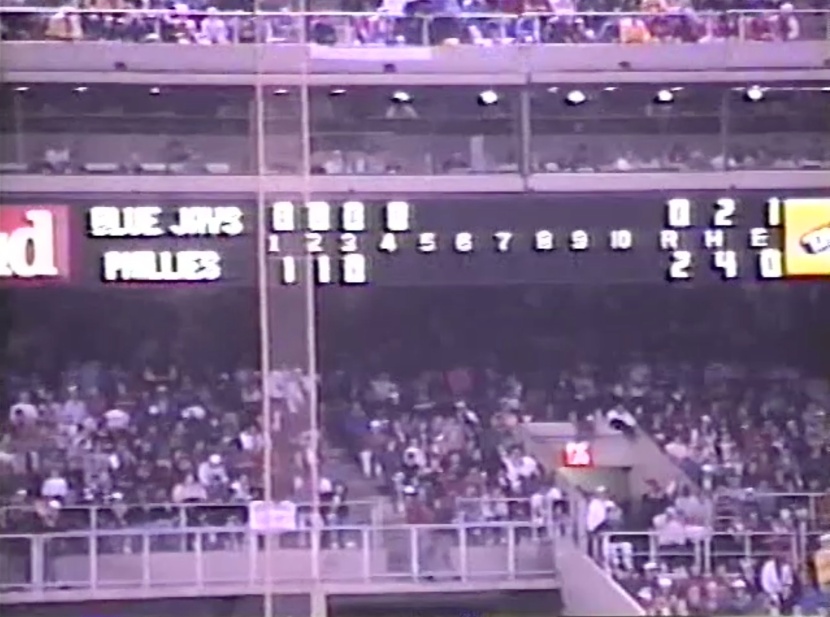 Curt Schilling was the starting pitcher for the Phillies, and he was dominant.

At one point in the middle innings, I remember seeing a foul ball fly back behind home plate and get stuck on a metal ledge in front of the press level. I asked my dad if I could wander over there for a closer look. He didn’t care. He was like, “Do your thing,” so I hurried over and was astonished to see that (a) the ball was too far out for anyone in the press level to reach, and (b) it was lined up perfectly with the edge of the overhang of the seats up above. My plan was to head up to that level of seats and then use my glove trick from the front row. I was sure that it would work. The only issue was security. Could I possibly get away with it *during* a World Series game?

Just as I was about to head up to the next level, a guard told me I would need my ticket stub to get back into the lower level. Unfortunately I didn’t have it with me — my dad was holding onto all my other stuff — so I had no choice but to head back to my seat.

I don’t remember why I didn’t run back and grab the ticket and then make a beeline for the 2nd deck. Maybe someone from the press level managed to reach the ball after all, or maybe I just lost my nerve. Whatever the case may have been, this remains one of my biggest “what if” ballhawking moments.

Back in my seat, I filmed the ball that I’d snagged before the game — an official American League ball with Bobby Brown’s signature: 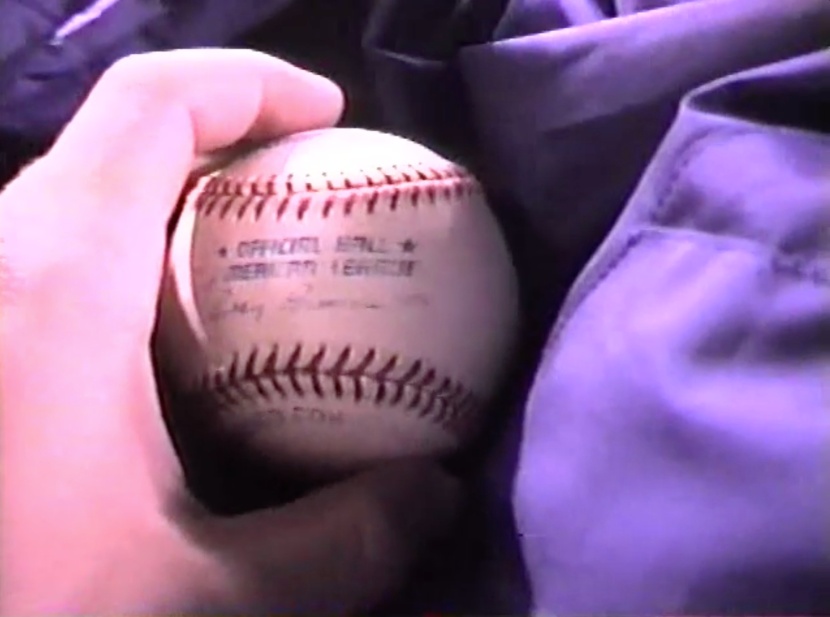 Remember the writing on the ball that I mentioned earlier? This was already there when I snagged it:

Weird. I wonder who wrote it.

In the 6th inning, some random drunk guy started shouting at me from the cross-aisle just behind our seats, and when I turned around with my camera, he stuck his tongue out: 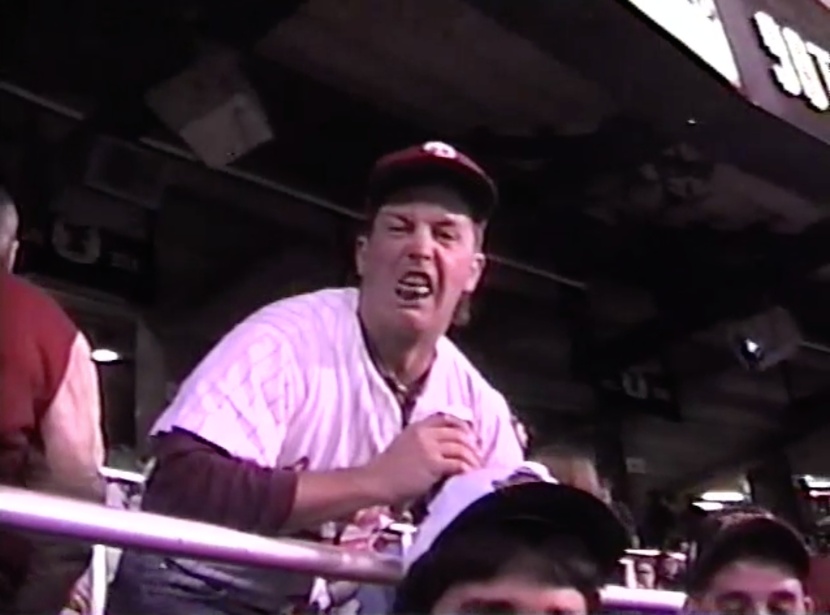 Once he had my attention, he chugged his beer: 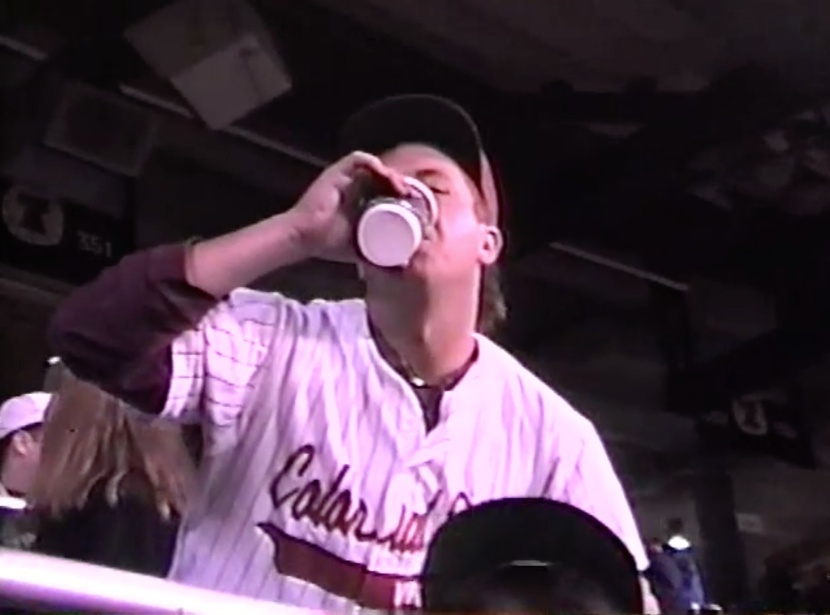 What a classy individual:

My dad, meanwhile, had struck up a conversation with a very nice man sitting next to him:

I forget who he was or what he did, but he had some kind of baseball-related connection and ended up mailing me a cap with the commemorative 1993 World Series logo, along with some other goodies. 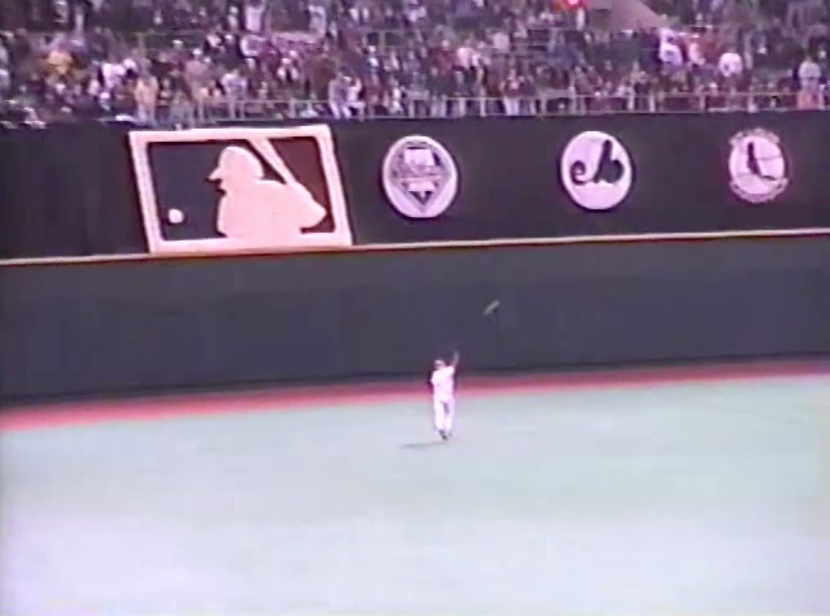 When the Blue Jays took the field, I got a shot of Rickey Henderson:

I always loved that guy.

With the Jays leading the series, 3 games to 1, the Phillies HAD to win to stay alive — and they did. Curt Schilling went the distance, and the final score was 2-0.

Two interesting facts about the game:

1) It was only the second time that the Blue Jays had been shut out all season.

2) It was the last postseason game ever played at Veterans Stadium.

After the final out, I filmed a bit more from our seats: 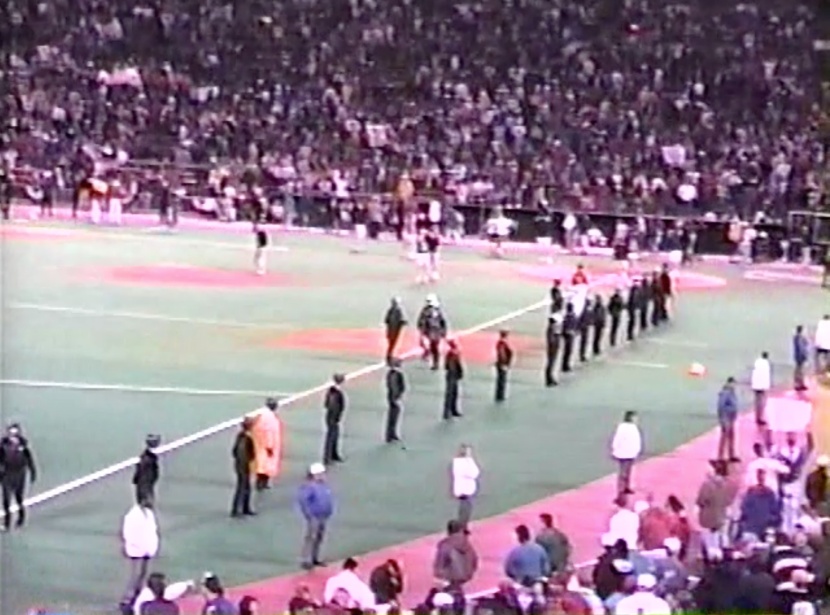 Then my dad filmed me walking around:

Here’s one last look at the seats and field:

Once again, I have no idea what I was thinking. I should’ve been behind the Phillies’ dugout, trying to get a ball. Perhaps I wouldn’t have made it past security, but it pains me that I didn’t even try. This was obviously a tough game for ballhawking — 62,706 fans and NO batting practice — but if the 30-something-year-old me could go back in time and do it over, my guess is that I’d snag at least three baseballs and possibly as many as six or seven.

Oh well. It was still a great day, and my dad deserves all the credit for making it happen.

The following season, when I saw Curt Schilling signing autographs at Shea Stadium, I mentioned that I had a ticket stub at home from Game 5 of the World Series, and I asked if there was any way to get him to sign it.

“Mail it to me,” he said, and I was like, “Really? I don’t want to lose it,” but he promised that he’d be on the lookout for it and take care of me.

He ended up coming through. Check it out:

I still think he’s a schmuck, but really, how awesome is that autograph? Also, in case you care, here’s the back of my ticket stub:

Two more things! First, here a list of all of my other “Turn Back The Clock” entries. Enjoy!

And finally, if you didn’t click the YouTube link at the top of this entry, here it is again — eight minutes of edited home video from Game 5 of the 1993 World Series: