It was another day of A-Rod hysteria:

Perhaps “hysteria” is an exaggeration. “Anticipation” and “excitement” and “teenage girls hoping to get on TV” would be a better way to describe the atmosphere.

When the stadium opened at 5pm, I raced out to the right field seats. My girlfriend Jona followed close behind with my camera. Here’s a shot of the section from afar. I’m standing in the last row (see the red arrow) wearing a black T-shirt and khaki green cargo shorts:

When A-Rod stepped into the cage, I moved up a few rows and quickly got my first chance of the day when he launched a deep fly ball in my direction. I could tell right away that it was going to fall a bit short, so I climbed over a row of seats…

…and when the ball predictably tailed to my left, I began to drift with it. If you look really closely at the following photo, you can see the ball in mid-air:

One second later, I reached to my left and made an uncontested, one-handed catch:

For the first 10 minutes, the seats remained fairly empty. I took advantage by running all over the place… 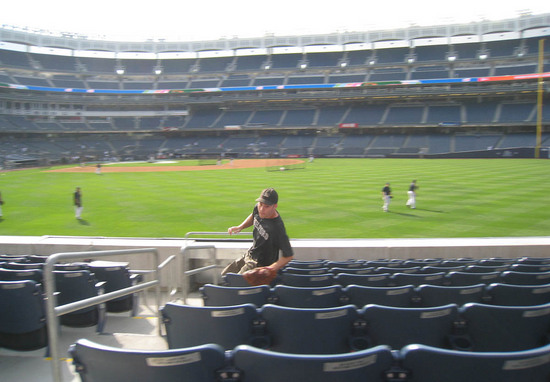 …but it didn’t always pay off. Here’s a photo that shows me tracking a home run ball…

…and here’s another that shows me NOT catching it:

I always seem to make great facial expressions when I narrowly miss baseballs. In my own defense, I missed this one because it sailed five feet over my head. Anyway, I got a chance to redeem myself moments later. A-Rod was back in the cage, and I was in position:

He launched another home run ball, this time to my right, and I took off after it:

Once I got close to the spot where I knew it was going to land, I slowed down a bit and started drifting:

I reached the spot:

The ball was heading right for me, but I could tell that it was going to sail a few feet over my head. There was no time to climb up on a seat. Did I have enough vertical leap in me to make the catch? 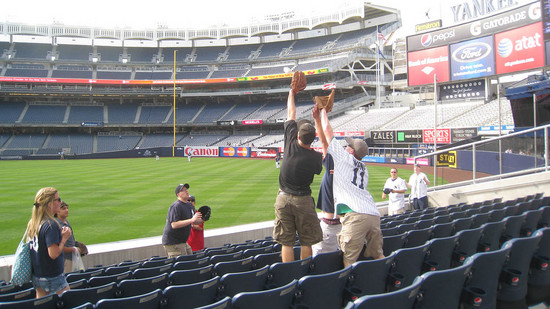 Here I am just after landing with the ball…

…and here I am holding it up for Jona (who deserves received many hugs and kisses for taking these outstanding photos):

Five minutes later, Curtis Granderson really got a hold of one and sent the ball flying deep to my left. The sun was in my eyes, so as I started moving through my row, I held up my right hand to reduce the glare:

As soon as I passed the Modell’s sign, I climbed over a row of seats:

The ball landed, and I climbed over another row:

And then I climbed over another: 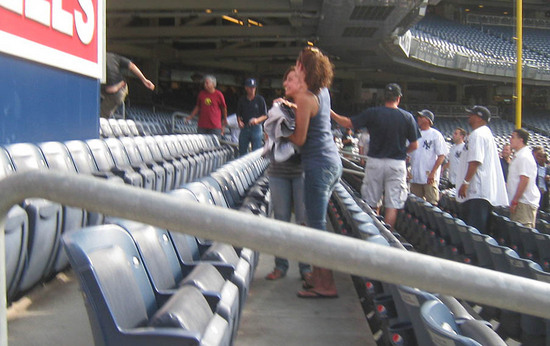 That’s when I grabbed it. (Did you notice that the guy in the red shirt never even moved? All he did was turn around to see where the ball landed.)

Moments later, I caught another A-Rod homer on the fly. It’s too bad that Jona didn’t get a photo of this one because I got clobbered while making the catch. I was in the middle of a cluster of people, and when I jumped for the ball, another guy crashed into me, elbowed me in the back of the head, caused my hat to go flying, and nearly made me tumble forward over a row of seats. I don’t think he meant to hurt me. I just think that some people are out of control and have no sense of their surroundings.

I’d snagged four baseballs in the first 15 minutes. Things were looking good. I thought I was on my way to double digits for the first time ever at the new Yankee Stadium — but then things slowed way down.

I still kept running all over the place…

…and climbing over seats…

…but I couldn’t get close to any other balls. I was still stuck at four when the Yankees’ portion of BP ended.

I threw on my Blue Jays cap and headed over to the left field side:

I don’t know what caused it, but the Blue Jays (who lead the majors in home runs) experienced a severe power outage. There was hardly any action in the stands, and as a result, I only snagged two more baseballs. The first was tossed by Jesse Litsch (who recognized me from Toronto). It was my 200th ball of the season. Here it is:

The second ball was a John McDonald homer. I grabbed it when it landed in the seats and handed it to the nearest kid.

Simple stuff. Six balls. Not terrible. Not great. But that’s to be expected at Yankee Stadium.

…although I should point out that the three balls I’m holding were my A-Rod homers.

Could A-Rod break out of his slump and hit one to me during the game?! Jona asked me what I thought my chances were of catching No. 600. This was my reaction: 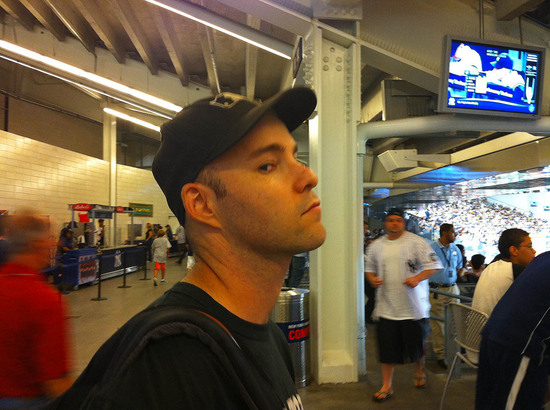 All I can say is that Yankee Stadium stresses me out. One thing, however, that did temporarily improve my mood was the free chocolate samples that we got from a Dylan’s candy stand inside Gate Two: 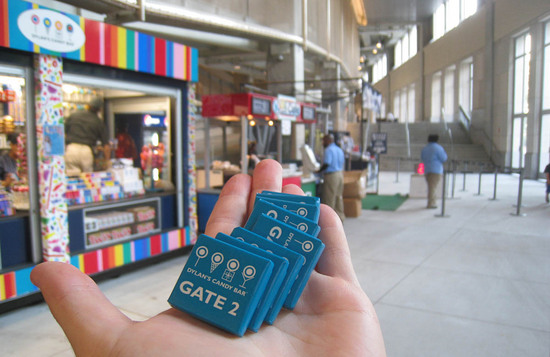 In the photo above, it looks so empty and peaceful, doesn’t it?

This was my view during the bottom of the first inning with A-Rod on deck: 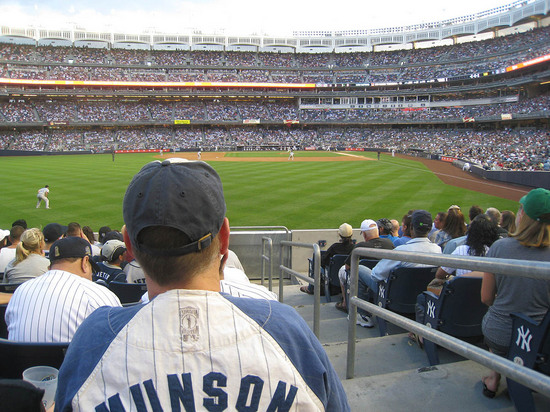 (Historical tidbit No. 1: This was the 31st anniversary of Thurmon Munson’s death.)

Jona and I had seats in the middle of a row. Early in the game, we were able to grab a couple open seats next to the stairs, but in the middle innings, every single end-seat was taken. I had to make a choice. The options were:

1) Move into the middle of the row and basically have no chance to move if A-Rod happened to go yard.

2) Leave the section and try my luck somewhere else.

We left the section. I couldn’t even bear the thought of sitting in the middle of a row. I knew I would’ve felt like a caged animal, so we wandered for a few innings and ended up in the bleachers.

Why does Yankee Stadium stress me out? Why haven’t I bothered to make a serious attempt at catching No. 600 in New York? 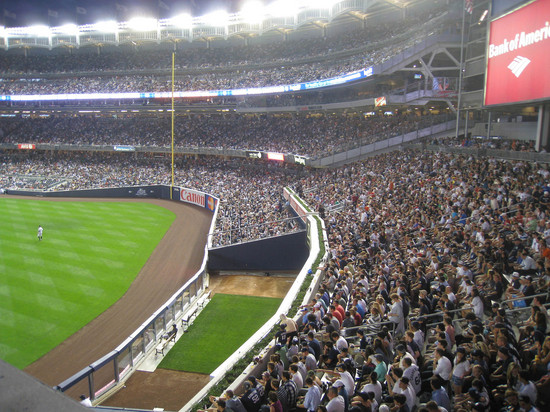 The strategy for catching a milestone home run ball at Yankee Stadium is simple: be exactly where the ball is going to be hit. There is NO room to move. Security checks tickets at every section. And even if you can somehow sneak into a section, there aren’t any empty seats. It’s a ballhawking nightmare.

When A-Rod grounded out to end the 7th inning, some people foolishly assumed that he wouldn’t come up again — and they left. Jona and I took advantage and moved back to our original section. Look at all this room I had: 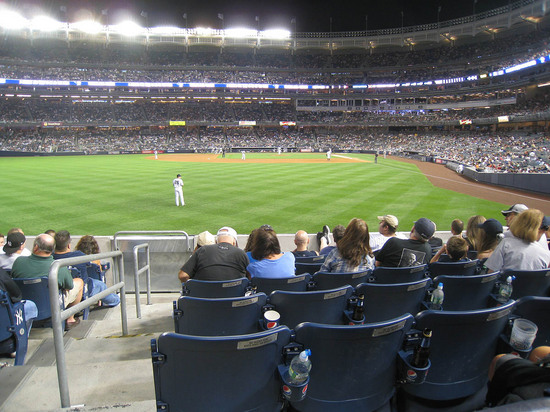 (At Yankee Stadium, that’s a lot of room.)

The Yankees got two guys on base in the eighth, which meant that A-Rod would be due to bat fourth in the bottom of the ninth…and…thanks to a one-out homer by Nick Swisher in the final frame, A-Rod did indeed get one last turn to hit.

It would have been nice if Mister Rodriguez hit a line drive right to me because I almost definitely would’ve caught it. Obviously, there’s no way to guard against someone in the front row throwing their glove up at the ball and deflecting it, but putting freak plays aside, I really do believe that if A-Rod had hit the ball anywhere within, let’s say…five feet of me, I would have caught it. But instead, he grounded out to shortstop to end the game.

(Historical tidbit No. 2: During this game, the Blue Jays tied an American League record by hitting six doubles in one inning.)

I raced over to the Jays’ bullpen and got one final ball from bullpen coach Rick Langford. I didn’t take my camera or backpack with me — Jona was hanging onto all my stuff — so when she finally made her way over, this was the only photo that she got:

It shows Langford and Janssen and the bullpen catcher walking across the field toward the dugout.

(Jona would like you to know that she took that last photo with her brand new iPhone 4, which she loves.)

• 651 consecutive games with at least one ball

• 493 consecutive games in New York with at least one ball

• 139 consecutive Yankee home games with at least one ball

• 7 consecutive seasons with at least 200 balls