For the final weekend of the regular season, I drove down to Baltimore with Jona and two other friends. Here we are outside the stadium:

In the photo above, the gentleman on the left is a teacher named Roger. He and I have known each other for more than a decade, and this wasn’t our first baseball road trip together. He was with me in 2003 when I snagged my 2,000th ball at Olympic Stadium. The guy in the yellow shirt is a writer named Bassey. I met him last year at my writing group. He played high school baseball in Milwaukee and now works for the New York Times.

Anyway, let’s get on with the action…

My first ball of the day was a batting practice homer hit by Adam Jones that landed in the empty seats in straight-away left field. Nothing fancy about it. My second ball, however, was a bit more exciting. Someone on the Orioles (not sure who) launched a homer 30 feet to my right. I bolted through my row and made a leaping back-handed catch at the last second. I didn’t know it at the time, but Jona had reached the left field seats by that point, and she took a beautiful action shot of the ball flying toward my open glove. The ball is hard to see because it’s overlapping the white uniform pants of some players in the background, so I drew a red circle around it. Check it out: 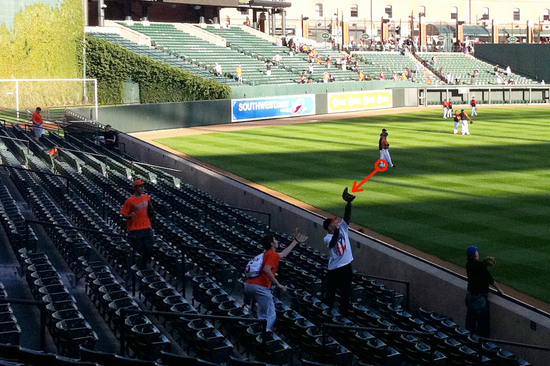 Ready for a funny photo of all three of us? Look at our ridiculous facial expressions as another home run ball sailed over our heads: 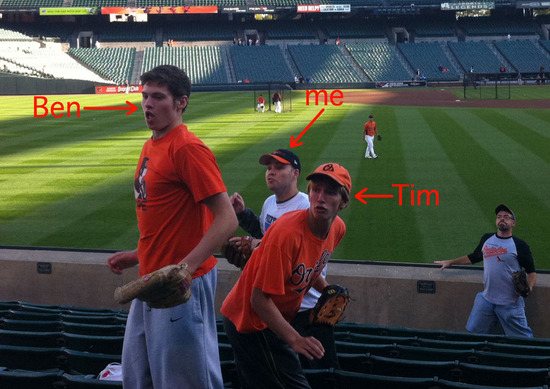 I forget who ended up snagging that ball, but I can tell you that it wasn’t me.

Tim and Ben write a blog together called Baltimore’s Finest, and of course they both have profiles on mygameballs.com. Here’s Tim’s profile, and here’s Ben’s. (And hey, here’s mine. Awesome website. Totally free. Go there immediately and create a profile if you haven’t done so already.)

As for Roger and Bassey… 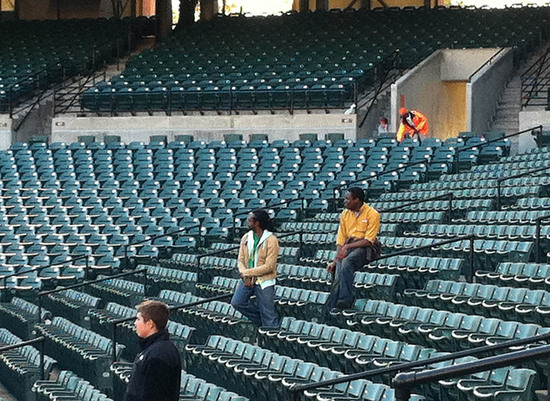 …they weren’t interested in snagging baseballs. They just stayed in one spot and watched the action unfold all around them.

My third ball of the day was a Nolan Reimold homer that landed in the seats and rolled down to the front row. My fourth ball was a ground-rule double, and I have no idea who hit it. I’ve had a tough time this season with ground-rule doubles in Baltimore. The warning track is made of rubber, and the outfield wall is low, so lots of balls have bounced over me. On this one, however, I played it perfectly. Once I determined that the ball was going to land on the track, I backed up a few rows and ended up in the perfect spot to reach up for the easy catch.

When the Tigers took the field, I got Phil Coke to throw me a ball as he walked toward the bullpen. Here I am (wearing dark Tigers gear) about to catch it:

My sixth ball was another homer. I ranged a full section to my right for it and made a back-handed catch in traffic:

That one felt pretty good — and then I caught another homer on the fly in left-center. Here’s a photo of that ball on its way down: 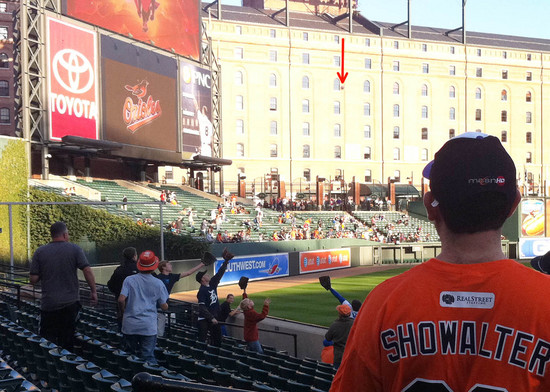 As soon as I caught the ball, I noticed that there was a young boy standing right in front of me. Even though I hadn’t robbed him, I decided to hook him up with the ball, and yes, Jona got a photo of that, too:

Halfway through the Tigers’ portion of BP, Eddie Bonine tossed me a ball in straight-away left field, and then I caught another homer on the fly in left-center. This was probably my best play of the day. There were people all around, so I climbed up on a seat while the ball was in mid-air and reached far to my left over everyone. In the following photo, the diagonal arrow in the upper right is pointing to the ball, and the vertical arrow down below is pointing at me: 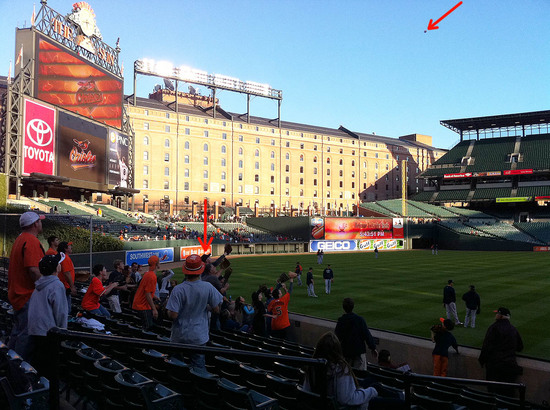 Every time I snagged a ball, I tossed it to Jona so she could put it in my backpack. Here I am preparing to toss her another:

Remember when I saw the Tigers at Target Field earlier this season on May 4th and May 5th? The Tigers were using balls during BP that had been marked like this with a thick black magic marker. Well, the Tigers were still using marked balls this past weekend in Baltimore. Some were marked on both the logo and sweet spot, while others were marked only on the sweet spot…like this:

Later in the day, I noticed that one of my baseballs had a faint black streak on it:

It occurred to me that the streak was probably the residue (or imprint) from one of those black marks on another ball. Cool, huh? It probably happened while the balls were being pressed together in the BP bucket or an equipment bag. I love stuff like that.

Every batter in the final group of BP was left-handed, so I headed over to the standing-room-only section (aka “The Flag Court”) in right field:

The sun out there was brutal. Even though I was wearing a cap, I had to use my right hand to shade my eyes:

Let me show you what I mean. Here’s a photo that Jona took while standing right behind me:

Not only was it tough to see, but every time a ball sailed into the Flag Court, there was an all-out stampede for it:

At one point, I completely whiffed on a line-drive homer that pretty much came right to me because I simply couldn’t see the ball. I found myself backing away from it and stabbing awkwardly at a random spot in the air where I thought it was going to end up. I suppose it was worth missing out on it to avoid getting hit in the face, but I still felt like a failure.

Here’s another action shot of a home-run-induced stampede:

This ball ended up sailing completely over the Flag Court and clanging off the grill in Boog’s Barbecue.

I did manage to snag one ball in right field, and I owe it all to Jona and Bassey. The ball bounced into the cross-aisle just next to the Flag Court and came to rest at Jona’s feet. I was about 20 feet away at that point, and because there were other fans nearby, I figured Jona or Bassey would grab the ball. But instead Jona yelled, “Don’t touch it!!” and Bassey used his body to form a mini-barricade (or, as he desribed it, a “containment zone”) around it so that no one else could grab it. I was able to race over and scoop up the ball, and because it hadn’t entered the possession of any other fan, I was able to count it. If Jona or Bassey (or Roger, who was also standing nearby) had picked it up and handed it to me, that would have nullified it. So…big thanks to my friends for bailing me out and helping me reach double digits — that was my 10th ball of the day — when luck/skill seemed to turn against me.

Here are the four of us being silly after BP…

…and here’s a HUGE moth-like creature that was chillin’ nearby on a brick wall:

If that thing had flown into my face, I’m quite certain that Roger, Bassey, and Jona would now be deaf because I would have shrieked THAT loud. We all have our weaknesses, and bugs are one of mine. Nature is pretty and all, but I don’t like to get too close to it, if you know what I mean. I live a quarter of a mile from Central Park. That’s good enough.

Shortly before game time, I got Will Rhymes to sign my ticket…

…and then I snagged two more baseballs within a 10-second span. The first was thrown by Brandon Inge. Here’s a photo of him just before he let it fly:

In the photo above, do you see the guy on the field wearing the navy blue athletic gear? Well, I assumed that he was the Tigers’ strength/conditioning coach, so I pulled out my cheat sheet… 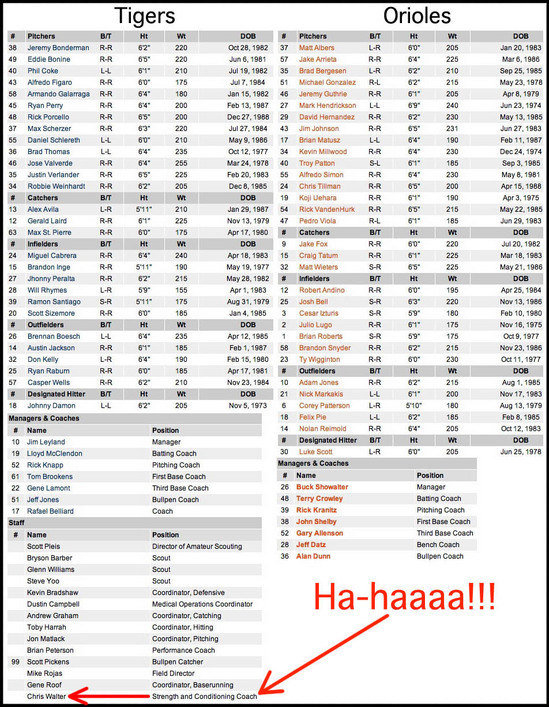 …and felt pretty certain that his name was Chris. When all the players headed back to the dugout, there was one ball that was still sitting on the grass near the foul line. This guy happened to pick it up, so I shouted, “CHRIS!!!” as loud as I could, and what do you know? He turned and flung it to me as he jogged off the field.

That was my 12th — and unfortunately last — ball of the day. During the game, I had two really close calls on foul balls behind the plate, and I missed Nick Markakis’s fourth-inning homer by two feet. It was so depressing. I was standing at the back of the Flag Court. The ball was hit exactly in my direction, meaning I was perfectly lined up with it from the moment that it left the bat. I quickly determined that it wasn’t going to reach the back of the section, so I darted forward, hoping to make the catch just behind the wall at the front. Well, the ball landed ON TOP of the wall (where there’s a three-foot-wide metal platform) and skipped back over my head and rolled to the EXACT SPOT where I’d been standing in the first place. I still would’ve had the ball if some bozo eating a pulled pork sandwich hadn’t been standing there. It was terrible. Meanwhile, it seemed as if everyone else I knew was snagging game-used baseballs. Tim somehow got his hands on the only other homer of the night, a blast to straight-away left by Brandon Inge, and Bassey managed to grab a foul ball despite sitting in the middle of a row on the first base side.

Here’s Bassey with his ball — the first one he’d ever snagged in his life, including batting practice:

Great for Bassey. Great for Tim. But it just added to my frustration. I busted my butt and ran all over the stadium for two hours and didn’t have anything to show for it. That’s right. Two hours. That’s how long the game lasted. The Orioles won, 2-1, behind a strong six-inning performance from Brian Matusz. Mike Gonzalez, Jim Johnson, and Koji Uehara each worked a quick scoreless inning in relief. For the Tigers, Armando Galarraga went the distance and notched a rare complete-game loss. He threw just 91 pitches in eight innings. That’s how to play a game in two hours. (Yankees and Red Sox, are you listening?)

After the final out, I met up with a friend from Baltimore named Adam. You might recognize him from previous blog entries. Here we all are:

The five of us went out to dinner at a nearby Chinese restaurant, and then Jona and Roger and Bassey and I went back to our hotel. We were gonna have to be up early-ish the next day for the final game of the regular season.

• 659 consecutive games with at least one ball

• 202 consecutive games outside New York with at least one ball

Hey, wait, here’s one more photo. I was playing around with Photoshop and…well, here, just have a look: