The last time I went to Cleveland, there was no batting practice because the Indians had played 16 innings the night before — a huge disappointment given the fact that I’d brought my videographer, Brandon, to film me for my YouTube channel. This time around, things went much smoother and we got some great shots.

As soon as I ran down to the right field seats, a ballboy shouted, “What’s up, Zack!” and began to pull a baseball out of his back pocket. (That’s how I should be greeted at every game.) He had contacted me earlier on Twitter, so I was expecting to see him at some point, but I had no idea he was going to hook me up with a ball right at the start of BP. Brandon wasn’t quite ready with his camera, so I asked the ballboy to wait. He kindly obliged, and when the moment was right, he tossed it to me. Here I am reaching up for the catch:

(That’s a screen shot from the video.) 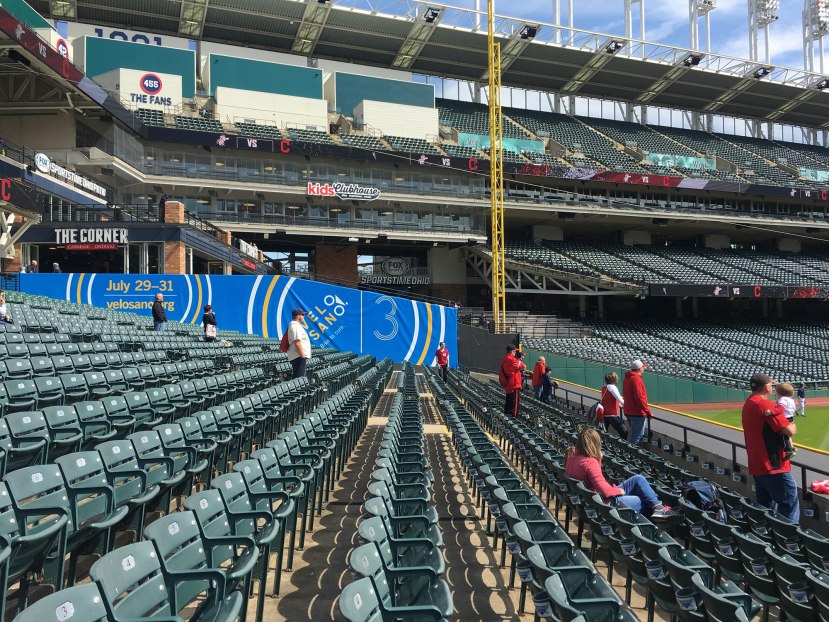 The seats in right-center, however, were more crowded:

There were only two people standing behind me. One was an usher, and the other was Brandon:

I did a nice job of maneuvering through the seats for my second ball of the day — a home run by a lefty on the Indians. Here I am reaching up for the catch: 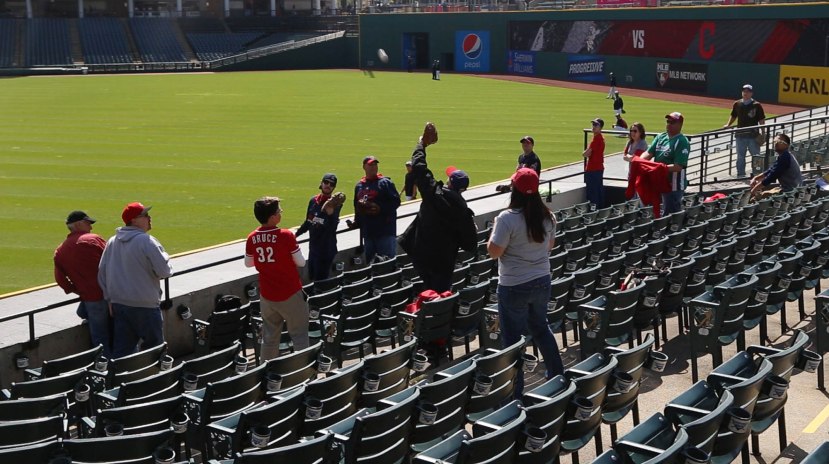 That ball had the Arizona Spring Training logo:

Since I don’t do Spring Training, I though these balls would be hard to get during the regular season, but I’ve been seeing them all over the place, along with the Florida version.

That was it for the Indians’ portion of BP — just one group of hitters after the gates opened, and they were done. (Laaaaame!)

This was my view for Reds BP:

I’d gotten a pair of tickets (for $59 apiece) in that new-ish section in front of the Indians’ bullpen. Look how gorgeous it is:

A little while later, I called out to Billy Hamilton and got him to toss up a ball:

There was a woman standing on my right, and look what happened — the ball went right between us, and we both backed off:

She refused, but I insisted. And then she insisted that I keep it, so I politely refused. Her male companion also insisted, and then he recognized me, so I when I insisted yet again that they “keep it or give it to a kid,” they finally accepted it.

My fourth ball was thrown by a player that I didn’t recognize:

A day or two later, when I had a bit more time, I posted that image on Twitter and asked for help identifying him. Look who responded:

It was Caleb Cotham himself! How cool is that? You might recall that he was one of the players involved in the Aroldis Chapman trade last year between the Reds and Yankees.

Of course I got questioned/dissed on Twitter for wearing a wristband, so if you’re wondering, I got it from Joey Votto himself after the game on 8/18/11 at Nationals Park, and I’ve been wearing it during Reds BP ever since. Here’s a closer look at it, and in case you’re interested, here are all the “bonus items” I’ve gotten at games over the years.

My fifth ball was thrown by someone else I couldn’t identify, and unfortunately he was too far away for me (or the camera) to get a good look at his face. That ball, by the way, fell short as I lunged over a railing for it: 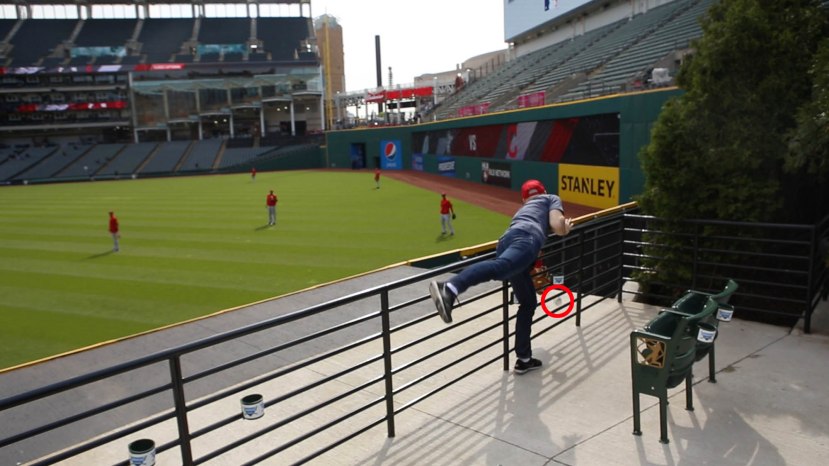 It passed through those metal bars, shot back toward Brandon, and plopped down right in front of him: 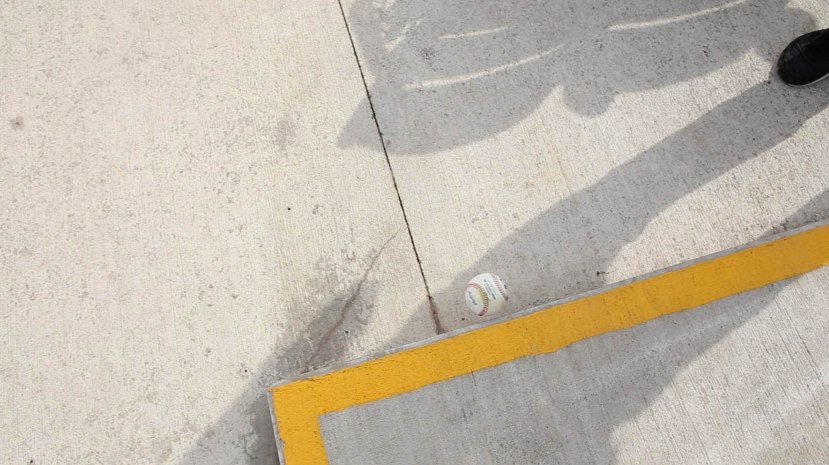 It didn’t take me long to run over and grab it; in the image above, that’s my sneaker on the upper right.

Progressive Field had opened at 5pm (or was it 5:10?) and for the first HOUR, all the fans were confined to the right field seats. When the rest of the stadium finally opened, I raced over to the bleachers in left-center and found a ball — my sixth of the day — tucked under a bench in the front row. 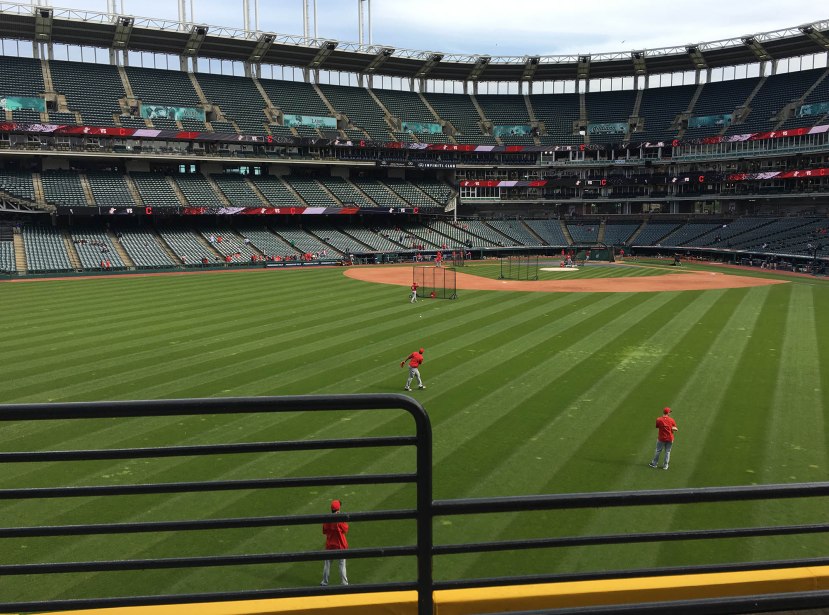 Moments later, as I was fumbling with my backpack, Brandon Phillips connected and sent a deep fly ball in my direction. I knew I was going to be able to make a play on it. I just had to scoot a few feet to my left. Look closely and you’ll see the ball streaking into my glove: 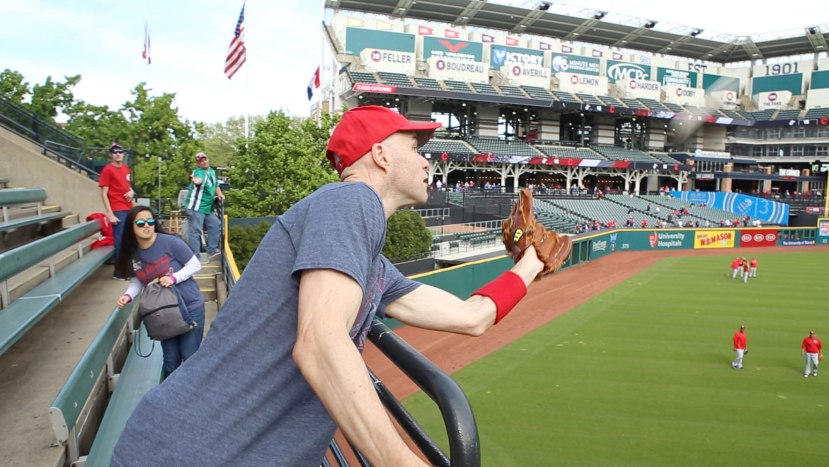 Sensing that I had a better chance of getting another ball at the dugout rather than in the outfield, I headed to the 1st base side with a few minutes remaining in BP:

Did you notice the new protective netting? Not only does it completely cover the seats behind home plate, but it extends halfway down the line toward 1st base: 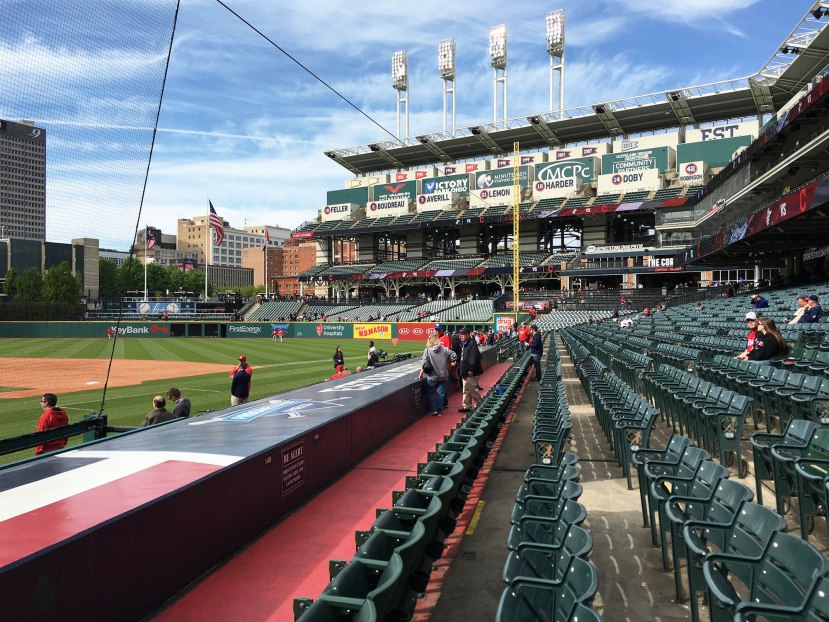 Don’t get me started again on the netting. If you want to know my thoughts, go to the 6:31 mark in my YouTube video from Globe Life Park in Arlington, Texas, but in a word: yuck!

When the Reds cleared the field, another unidentifiable player rolled a ball “to” me across the dugout roof. Why didn’t he throw it to me? I don’t know, but because the Indians don’t allow people to stand in the front row behind the dugouts (unless, of course, they actually have front-row tickets), I had to jump over the seats from the second row: 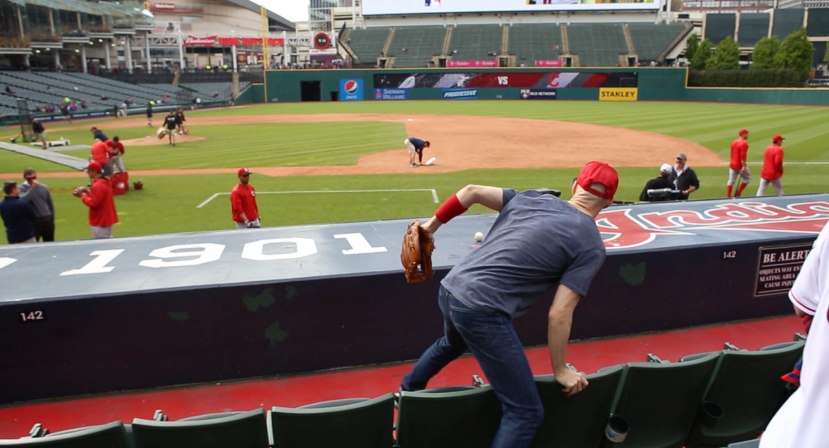 I got scolded by an usher who told me how dangerous it is to do that:

Then he lectured me about climbing on furniture in people’s homes and said he wouldn’t invite me over to visit. I’m not making this up.

Less than a minute later, I got another ball from the equipment guy. In the following screen shot, you can see him on the left, tossing it to me: 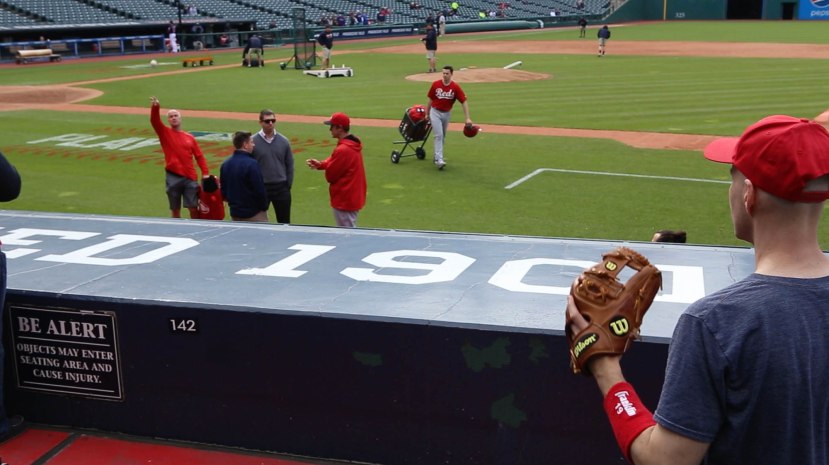 That was my ninth of the day, and I was happy to reach double digits right before the game when Indians pitching coach Mickey Callaway tossed me a ball from the bullpen in right-center. Unfortunately Brandon didn’t get a shot of that because he was filming the starting pitcher warming up instead. Hmph.

Ready to hear about some bad luck? During the game, most of the hitters were right-handed, so I stayed on the Home Run Porch down the left field line. This was the view: 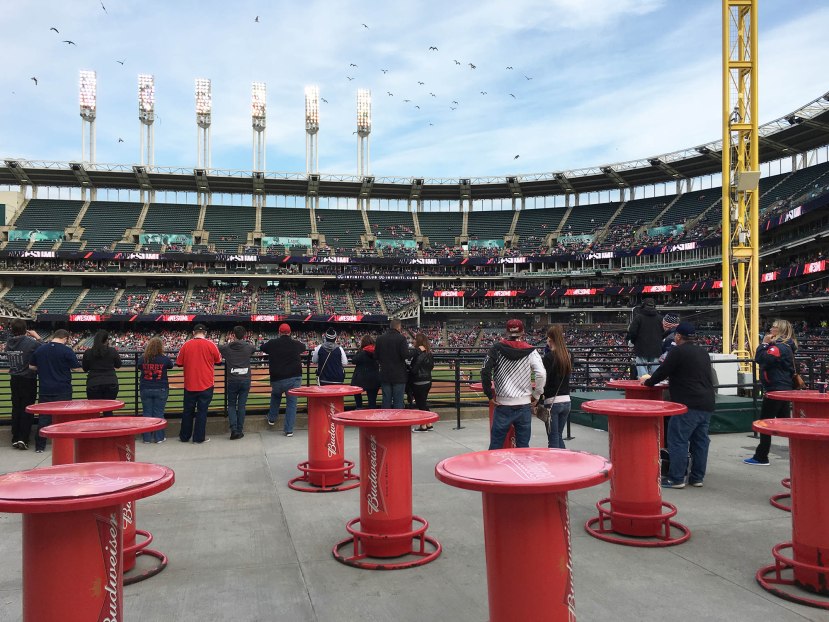 Four different righties (Adam Duvall, Eugenio Suarez, Yan Gomes, and Marlon Byrd) ended up hitting home runs — two into the left field bleachers and two more within 20 feet of my actual seat in right-center. Had I been where I “belonged,” there’s a good chance I would’ve snagged one or both of those balls.

In the previous photo, did you notice all the birds flying around? Well, here’s some more bad luck:

That was some random guy whose fancy stars-n-stripes Indians cap got pooped on. (No, that’s not good luck. If you think it’s lucky to have some flying creature defecate on you, you’re living a lie.)

Remember the ballboy from the start of BP? Well, here he is during the game: 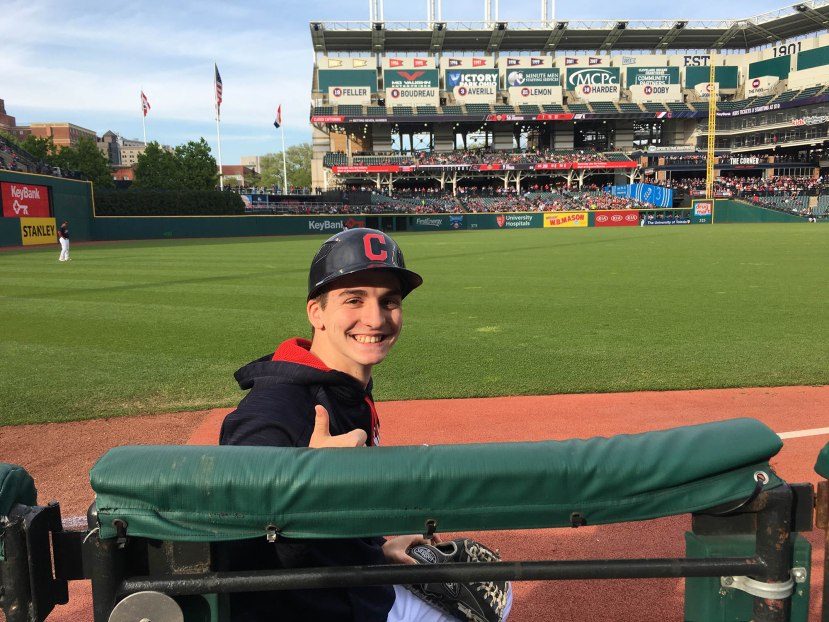 His name is Samuel, and he’s super-friendly. That’s where he always hangs out during games, so now you can look for him on TV, and if you ever see him in person, go say hi.

Back on the Home Run Porch, I ran into Pete Rose’s No. 1 fan:

A few innings later, I wandered back to right-center and took a photo of the Reds’ bullpen:

Because of the fan-friendly renovations to Progressive Field, folks can now get much closer to the players. Thumbs-up!

Here’s the jumbotron/scoreboard in the bottom of the 8th inning:

The Indians were winning, 15-6, and that’s how it ended. I didn’t snag any more baseballs, but I did give three more away. This was the first recipient . . .

. . . and then I handed a ball to each of these two little guys:

Brandon had met up with two of his friends during the game, and we all went out for a bite after. Here’s what I got:

That was a football-sized (okay, slight exaggeration) baked potato with a whole lot of cheesy/creamy/bacon-y things on top.

(Lots of people have told me that they like seeing my food photos, so there you go.)

Here are the six balls that I kept:

• 10 baseballs at this game

• 81 balls in 9 lifetime games at Progressive Field = 9 balls per game.

• 1,191 consecutive games with at least one ball

My fundraiser for Pitch In For Baseball is now in its eighth season. Once again, people are pledging money for every home run ball that I snag during games. Here’s some info about the fundraiser, and if you donate, you’ll be eligible to win one of these prizes.

• 9 donors for my fundraiser