My season got underway with a grungy subway ride to Yankee Stadium:

. . . but as luck would have it, my line got held up for five minutes because there were no baskets.

That’s right — baskets! See those little white things on the tables in the photo above? The guards hadn’t yet brought them out to the tables where I was waiting. For some reason, fans are required to place their items *in* the baskets before proceeding through the metal detectors, and since the baskets weren’t there, I had to stand around and watch helplessly as hundreds of people at other lines filed into the stadium.

Here’s what it looked like when I finally made it out to the right field seats:

Several minutes later, I got my first ball tossed by Dellin Betances: 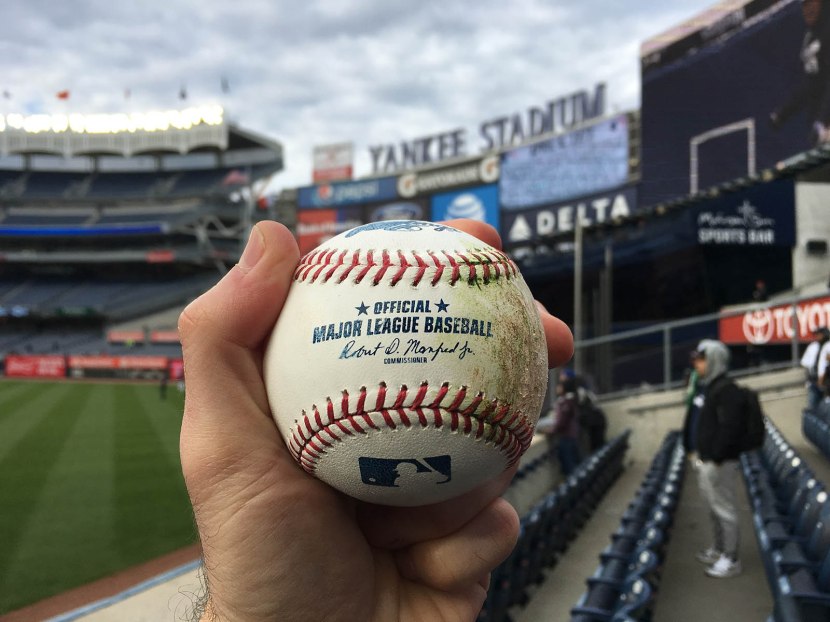 I was hoping that the Yankees and/or Astros would be using their leftover Spring Training balls during batting practice. This year, for a change, there were special balls with commemorative logos — one for the Grapefruit League that said “FL” and another from the Cactus League that said “AZ.” I’d seen photos of these balls and really wanted one, and while I certainly could’ve traveled to Florida and Arizona and snagged a whole bunch of them, that wouldn’t have counted toward my collection. I don’t do Spring Training, but if I happen to snag a Spring Training ball at a regular-season game . . . well, that’s a whole nother story. Remember when Heath Bell saved a ball for me from the 2009 World Baseball Classic and tossed it to me on 7/23/09 at Citizens Bank Park? Same deal. I wouldn’t have counted that ball if I’d snagged it at the WBC, but since I got it at a major league stadium during the regular season, it totally counted.

Anyway, I caught a couple of homers during the Astros’ portion of BP, but those were regular balls. The first was hit by Colby Rasmus, and I caught it while climbing down over a row at the back of the section. The other was hit by a righty (no idea who), and I grabbed it “in traffic” as I like to say, meaning there were folks all around me. I handed that ball to the nearest kid and ended up giving away another ball later.

Getting three balls including two homers on the fly might sound good, but I was disappointed. I just wasn’t on my game and missed several other opportunities for various reasons. At one point, for example, I ran to the back of the section for a deep home run, which ended up ricocheting down from the bleachers right to the spot where I’d been standing. A few minutes later, I raced toward the bullpen for a ground-rule double, which I barely missed, and while I was there . . . yup, you guessed it — another one bounced right to my regular spot. I barely missed a third ball by not jumping high enough for yet another ground-rule double. That was particularly frustrating because I could’ve jumped higher. I just didn’t expect it to sail as high as it did, and I only whiffed by a few inches. The most infuriating moment came when I scurried for a home run that landed in an empty row, cupped it against the folded-up portion of a seat, and had it yanked out of my hand by a fellow who, let’s say, could probably have a decent career as a sumo wrestler. No chance to compete with that. But whatever. I was still in a good mood overall. It was nice just to be at a baseball game after a five-month hiatus.

Here I am posing with a couple of guys who recognized me from Barstool Sports: 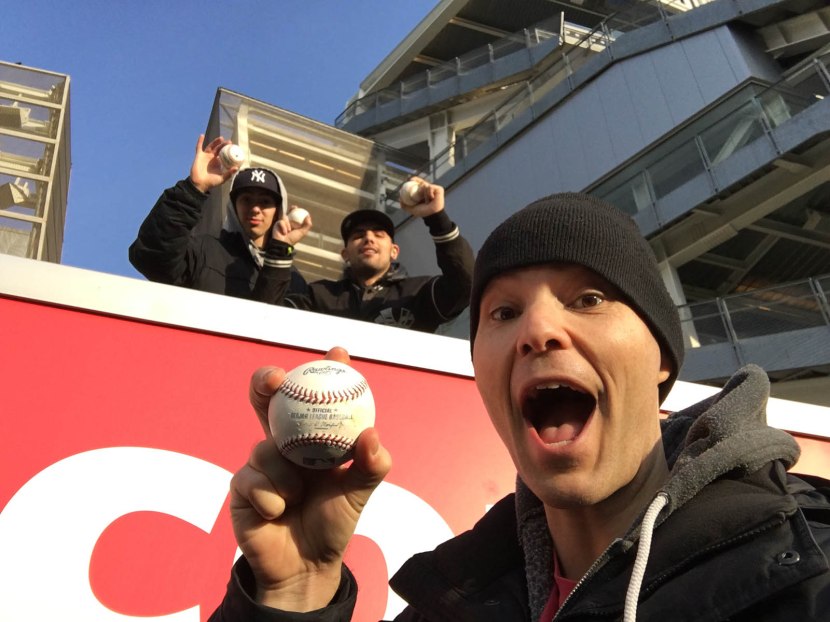 The guy on the right had handed me his phone and asked me to take a selfie with them in the background. It seemed like a fun idea, so I took a similar photo with my camera.

These guys also recognized me:

They were really nice and asked a zillion questions.

Not everyone was friendly, however. Later in the evening, one guy shouted, “Your sports blog sucks!” as he walked past me, and another guy, who must have boycotted the news starting last June, yelled, “Boooo!! You stole money from A-Rod!!”

Before the game started, security wouldn’t let me hang out next to the visitors’ bullpen, so in order to say hello to the Astros’ friendly bullpen catchers, Javier Bracamonte and Carlos Munoz, I had to head up to the bleachers. Look who I ran into there: 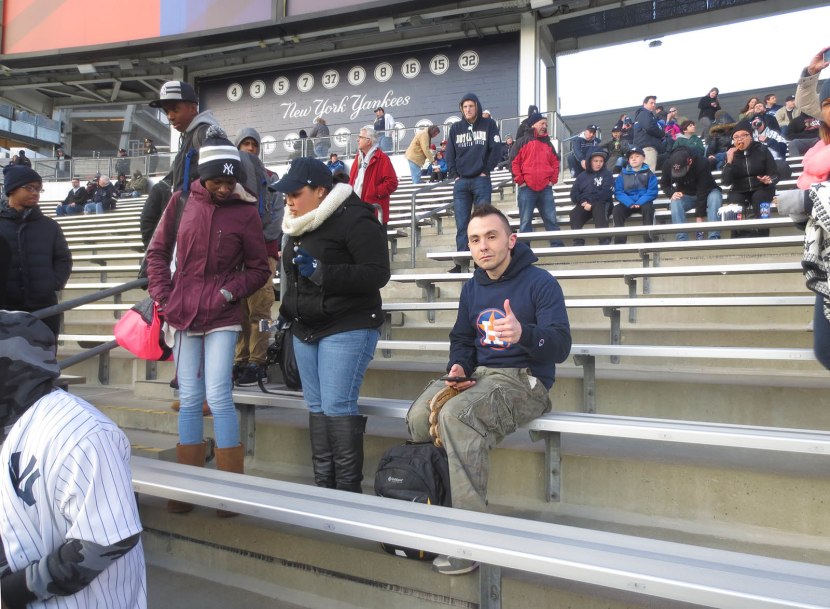 That’s my friend and fellow ballhawk Chris Hernandez, and if you think he looks miserable, you’re right! Not only was it stupid-cold, but he’s never too thrilled, it seems, about being at this stadium.

Guess what he showed me? A Spring Training baseball that he’d gotten from a coach. A few minutes later, I asked Bracamonte if he had another, and he hooked me up! Check it out: 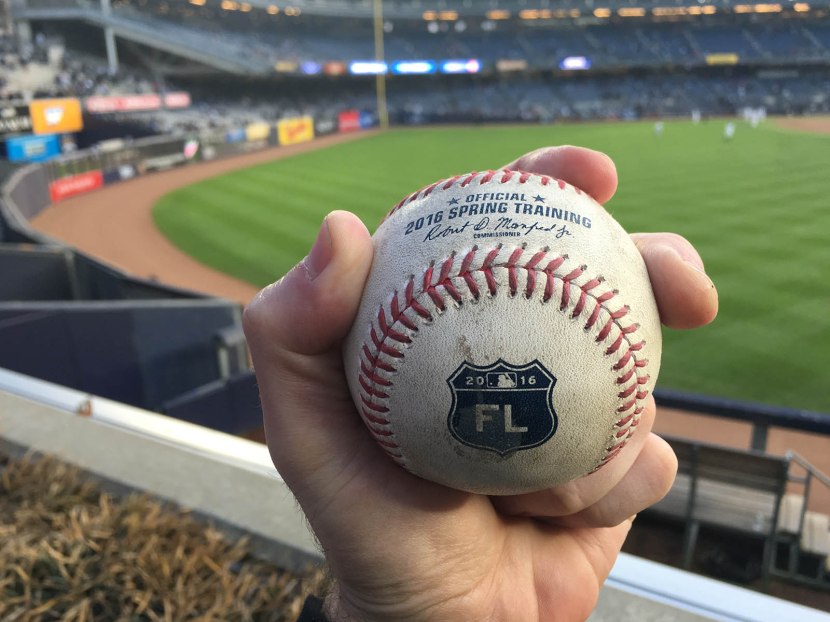 That made my day.

Officially, the game-time temperature was 43 degrees, but according to AccuWeather.com, the “Real Feel” temperature was only 31 degrees. Now that you know that, look at this guy: 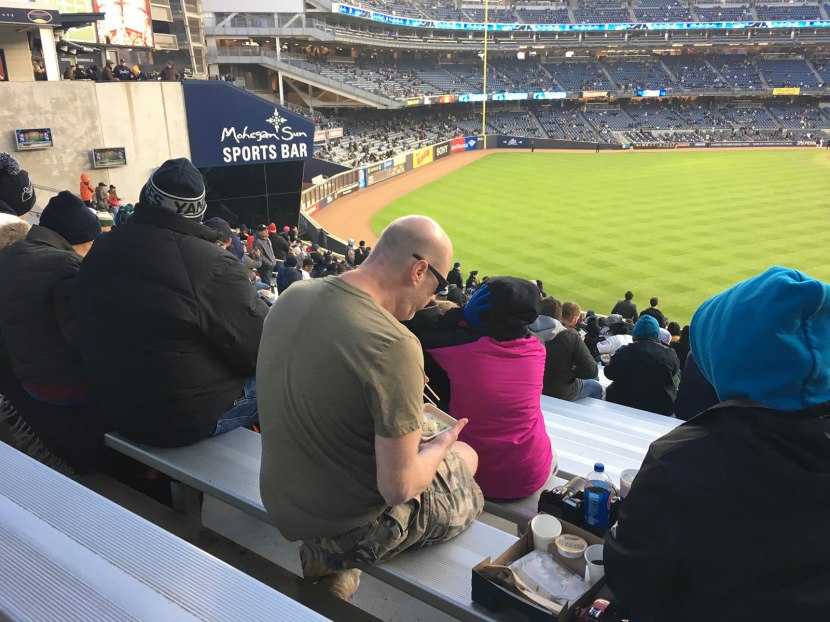 Was he dumb or showing off? Or both? Look at the person sitting on his left. Look at everyone else in that photo. Nearly everyone was bundled up and wearing a hat or a hood, and he was in shorts and a t-shirt. (And eating sushi. At a stadium. So yeah, dumb. I’m gonna be all snooty for a moment and say that I’ve eaten fresh sushi in Japan, and yes, there’s a huuuuge difference in quality.)

Soon after I took that photo, some creeper took a lousy pic of me and tweeted it: 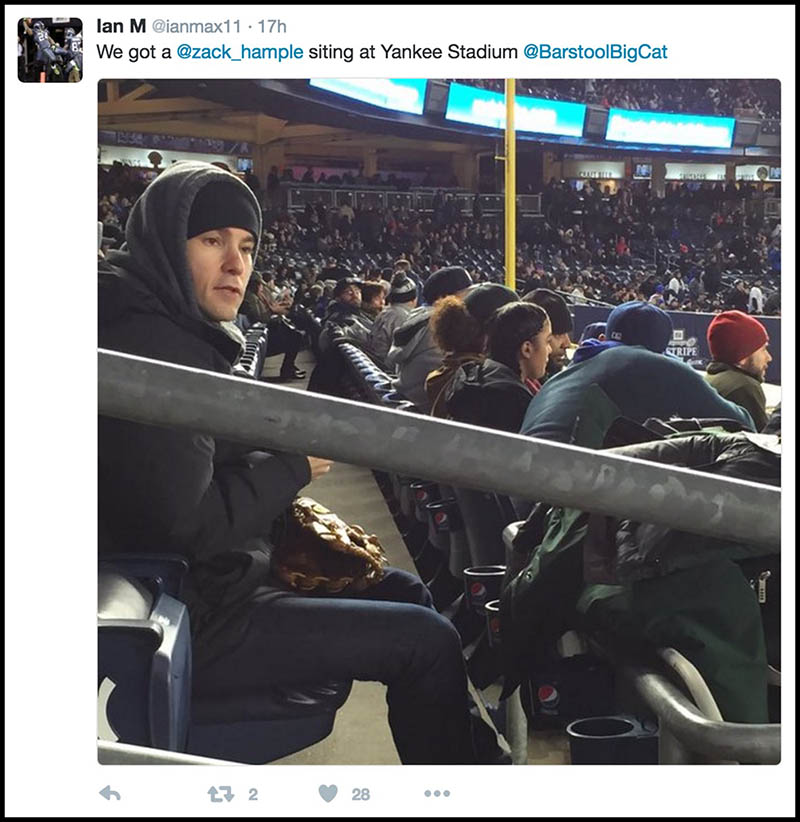 You know what wasn’t sited/sighted? Quality pitching. It took an hour and 45 minutes to play the first three innings, and here’s why: 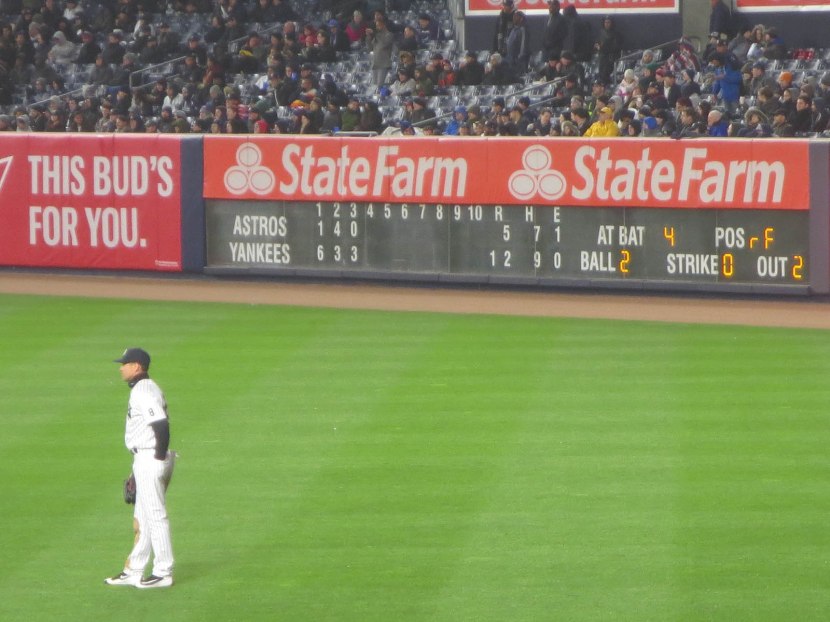 In case you’re bad at math, that’s a total of 17 runs. The game was moving so slowly that I had time to photograph random mystery objects:

Seriously, what is that thing on the railing? There was another one near the front row, and I spotted them on the railings in other staircases too. I tweeted about it during the game. Most people guessed that those things have something to do with WiFi, but I’m not convinced.

Thankfully the pace picked up in the later innings, but because of the weather and lopsided score, the seats had pretty much cleared out:

All that room didn’t help me. Over the course of the game, there were six home runs, and none of them came within 100 feet of me. Two of those dingers were hit by the 21-year-old Carlos Correa, who seriously looked like Superman:

Gotta love his 2.375 OPS. See it posted to the left of the jumbotron? Unfortunately for him, six of his teammates were hitless on the season. See all those goose eggs in the lineup? That’s losing baseball right there. Final score: Yankees 16, Astros 6.

Look what I saw on the subway platform on my way home: 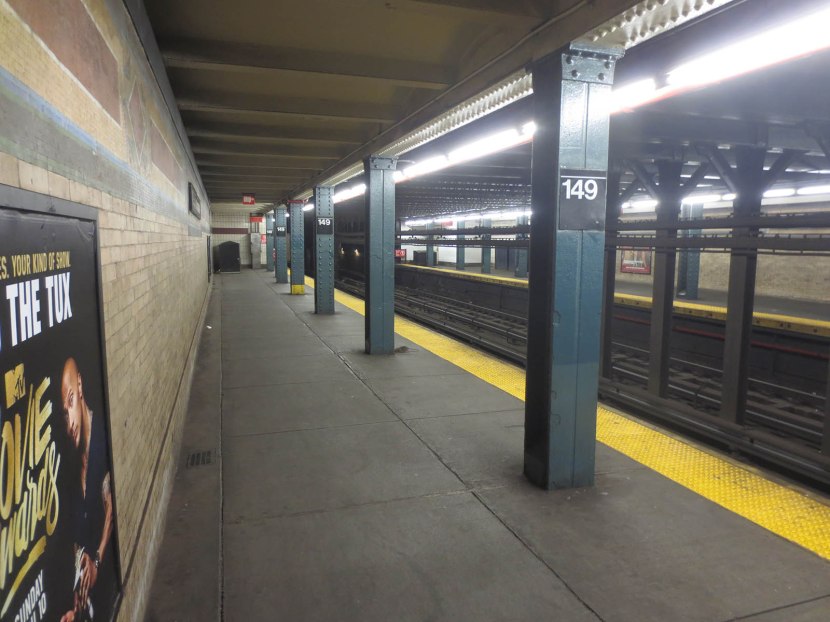 Shall I zoom in for you?

Oh, New York City — what am I gonna do with you?

• 1,167 consecutive games with at least one ball