Several years ago, when MLBlogs switched over to WordPress, a bunch of my blog entries were lost, including this one from Baltimore. Thankfully I had saved all the photos, along with the text from my original entry, so this was easy to recreate. Enjoy!

I should’ve been working on my book, but I couldn’t pass up the chance to catch Ken Griffey Jr.’s final major league home run.

Yes, final home run — the “Kid” might not be playing much longer.

In any case, the weather was miserable — temperatures in the 40s and rainy — so this was the scene when Camden Yards opened at 5pm:

The Mariners were just starting to loosen up, and the tarp was on the field. (The reason it was in the outfield is that the grounds crew had pulled it out there to get the water off.)

After 15 minutes, Jason Vargas tossed me my first ball of the day. Pretty simple. Nothing special about it. But my second ball was rather unexpected. I was standing near the Mariners’ bullpen in left-center, minding my own business, and keeping my mouth shut. Felix Hernandez was pitching. Bullpen coach John Wetteland was looking on. I didn’t want to interrupt them, so I stood there quietly (with my glove and Mariners gear) and simply watched. This was my view:

All of a sudden, Wetteland looked over at me, pulled a ball out of his pocket, and held it up — but I wasn’t ready to receive it. My camera was on, and I wasn’t wearing my glove, so while I fumbled for a few seconds with my stuff, he waited patiently and then made a perfect throw.

Then things went dead (from a ballhawking perspective). I watched Ichiro do some running on the warning track . . . 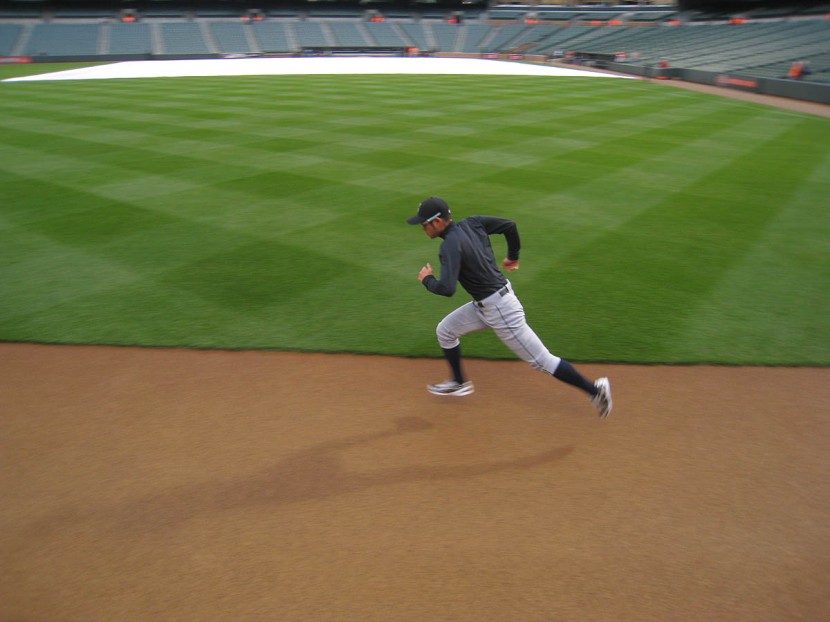 . . . and headed to the upper deck. Ready to see the definition of beauty?

I was wandering through the upper deck with one of my newer baseball friends — a college-aged kid named Avi. When we made it back down to the field level, we ran into fellow ballhawk named Matt, who mentioned something about getting into the club inside the warehouse. I’d never been in there — at least not on the upper floors — so Matt led me and Avi to the entrance. It’s called the “Camden Club,” and you can see the doors on the lower right in the following photo:

When we headed inside, a security guard checked our tickets (any ticket will do) and drew little squiggly lines on them with a magic marker. Then he handed us each a ticket-like coupon (which no one ever asked for) and directed us to the elevators. The whole security process seemed pointless, but anyway, here’s what it looks like on the eighth floor of the warehouse: 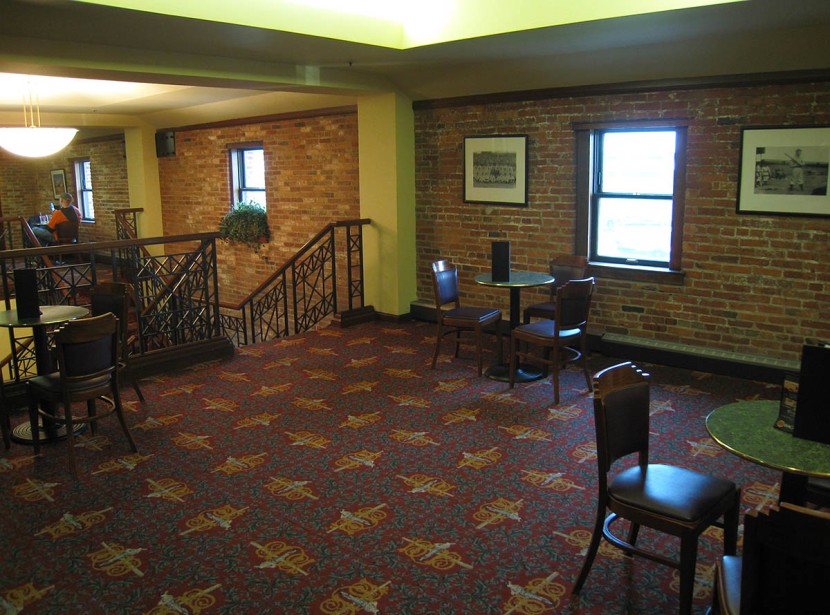 See that window on the right? In the photo above, it’s all washed out, so let me take you closer for a look through it: 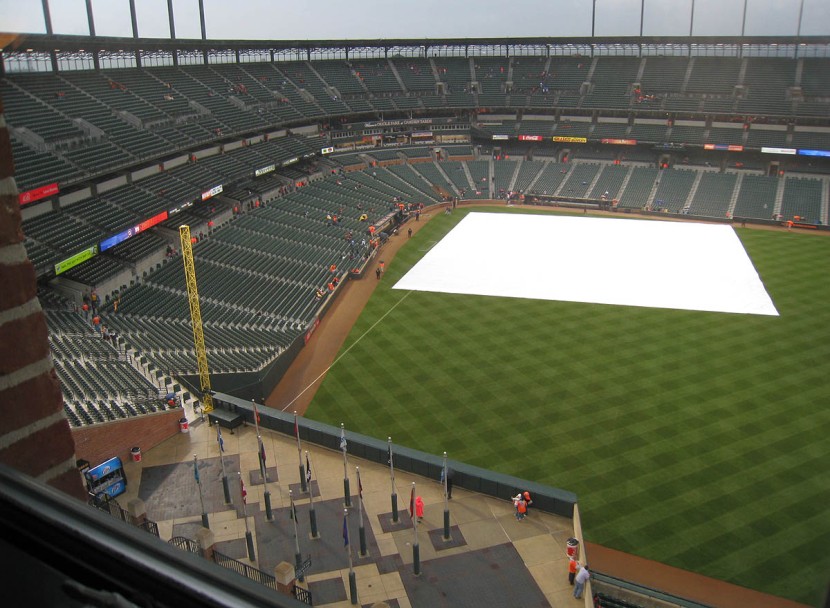 The club has a staircase leading down to the seventh floor . . .

. . . which pretty much looks the same, so I won’t bore you with any more photos of it, but you have to see the bathroom: 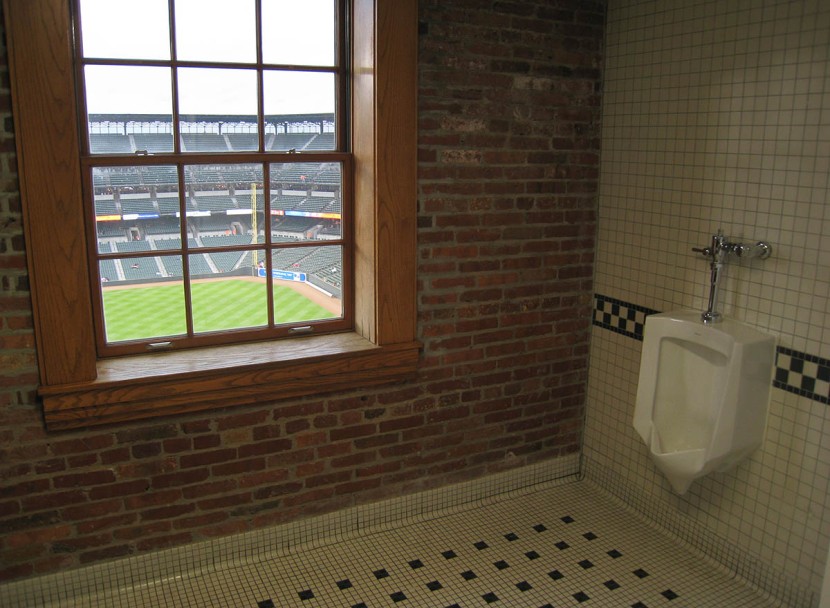 (Good thing the security guard didn’t walk in there while I had my camera out.)

Avi and I hurried down to the left field foul line when the Mariners came back out for pre-game throwing. Jack Wilson tossed me my third ball of the day, and Michael Saunders hooked me up with No. 4.

Here’s a photo that I took right after I got the ball from Saunders; the upper arrow is pointing to the window on the eighth floor of the warehouse that I’d been looking out of 15 minutes earlier:

My friend Brandon had told me that he was going to show up at this game at some point. Little did I know that when Saunders threw me the ball, he was already there, taking pics of me from across the field. Check this out:

Here’s another photo, taken roughly one second later, that shows the ball inches from my glove. The double arrow on the upper right is pointing to my friend Todd Cook and his four-year-old son Tim: 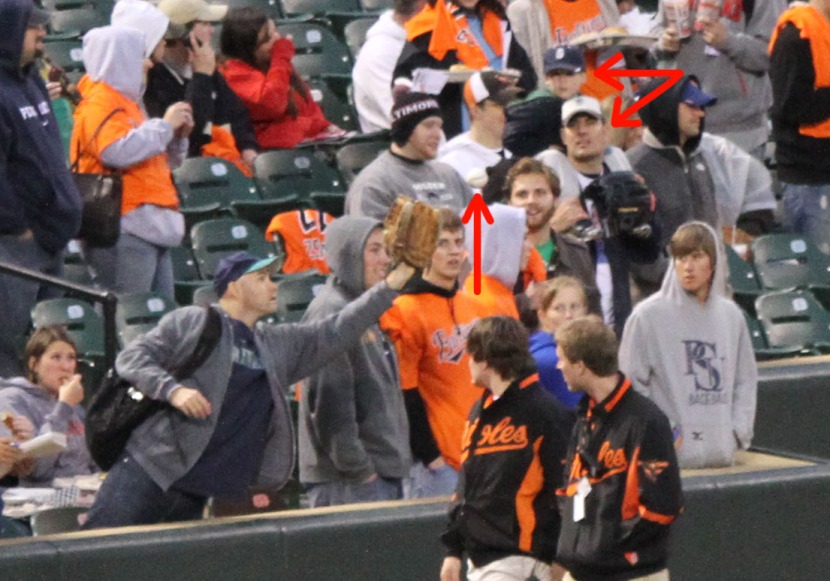 FYI, Brandon is a professional videographer. He recently finished working on the Alternative Press Tour. The reason he showed up late is that he had to finish some editing.

Here’s a photo of me and Avi: 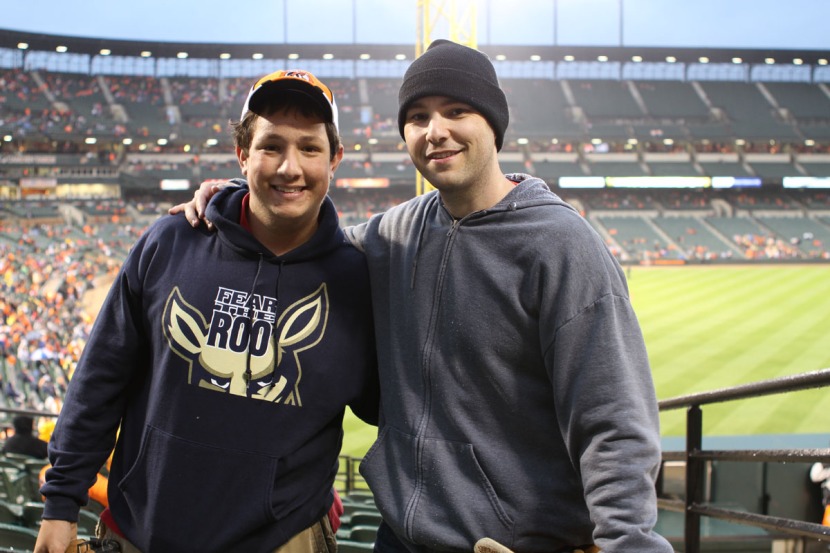 Avi is a season ticket holder at Camden, and he’s been reading this blog for quite some time. He doesn’t have an exact count of the number of balls he has snagged, but he figures it’s about 120, including two game home runs.

I spent most of the game in the standing room only area (aka the “Flag Court”) down the right field line. Here I am, bundled up in four layers of clothing: 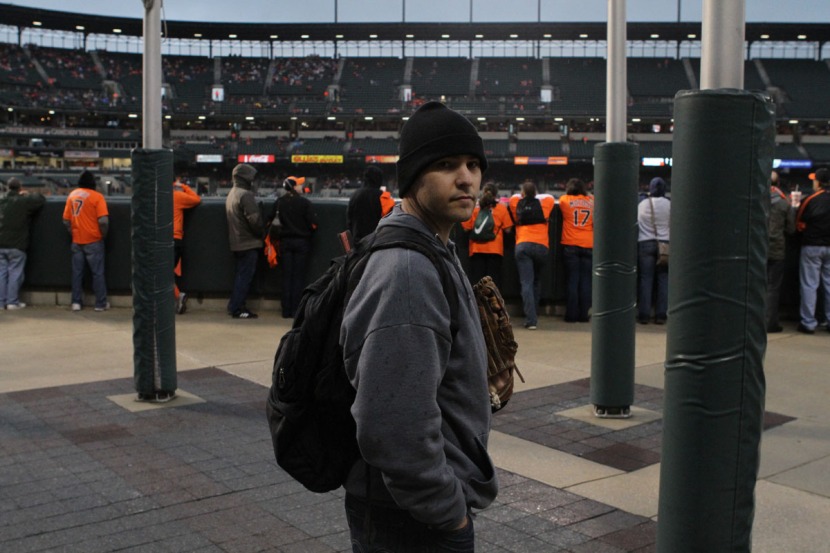 Griffey went 0-for-3 with a walk. The game’s only home run — a solo shot in the fifth inning by Ryan Langerhans — landed nowhere near me. Very frustrating. The Mariners won, 5-1, behind a sharp outing by Cliff Lee.

After the game, I positioned myself next to the umpire tunnel behind the plate:

Home plate ump Rob Drake handed me a ball on his way out. Here I am (in the gray hoodie and black cap) reaching over the wall for it:

Three minutes later, when the Mariners relievers walked in from the bullpen, I was in the perfect spot to get a ball tossed to me by Jesus Colome. Here’s a photo that shows the ball in his hand: 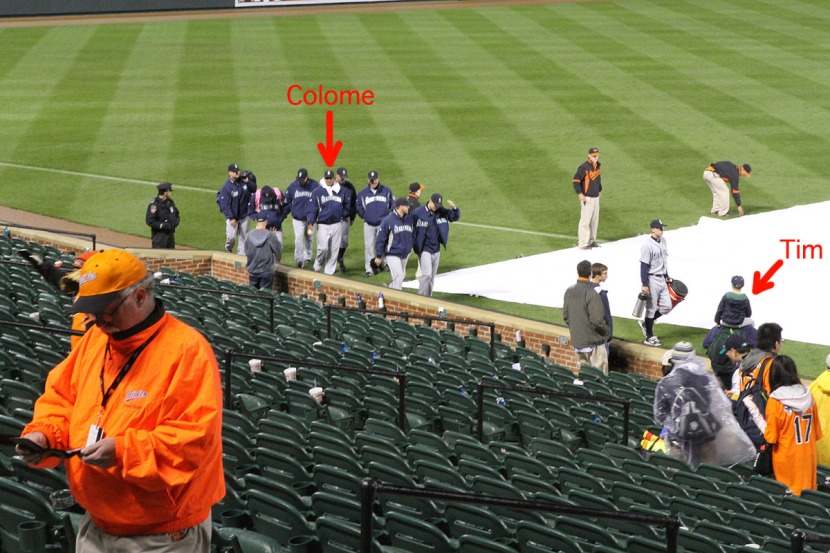 Todd and Tim snagged their own share of baseballs. Here I am with them, recreating (a mirror image of) this fist bump from 6/3/09 at Nationals Park:

Todd also blogs about his games and has lots of great photos.

That’s pretty much it. I’ll be here for two more days. Think happy thoughts about Griffey and wish me luck . . . 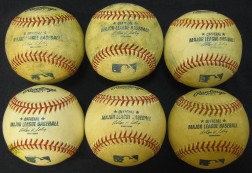 • 6 balls at this game (pictured on the right)

• 638 consecutive games with at least one ball