Several days ago, I joined David Rhode, the director of Pitch In For Baseball, for an equipment donation event at Yankee Stadium. Here we are after getting off the subway: 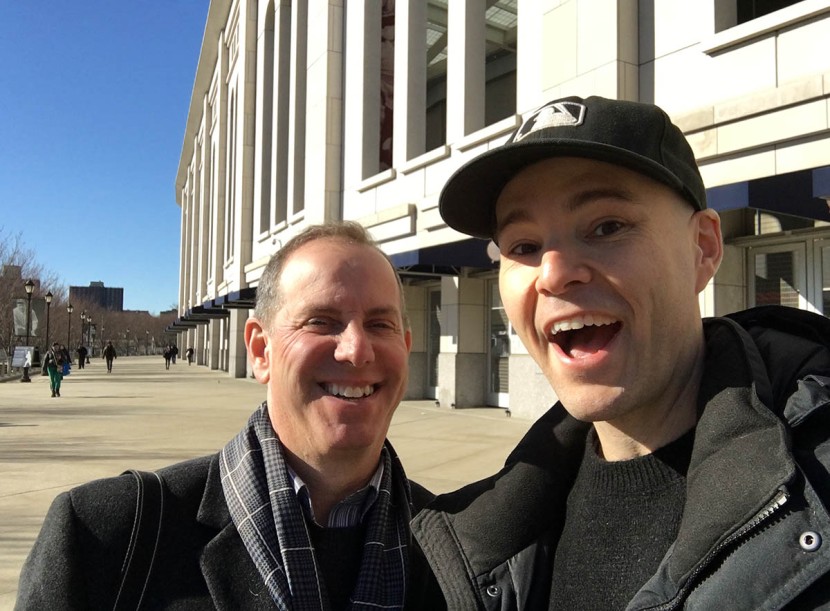 . . . and after figuring out a few logistics, a bunch of us helped set up these boxes:

Here’s David with all the boxes in place:

These boxes were filled with baseball and softball equipment for local youth teams. As you can see in the photo above, one cluster of boxes was designated for Health Opportunities High School, located nearby in the Bronx.

Here’s where all that equipment came from. (Did you click that link? It’s important, so do it!) That’s David on the left, receiving an oversize check from the Yankees, presented by Brian Smith, the team’s Senior Vice President of Corporate and Community Relations. Pitch In For Baseball got that money last summer when I gave Alex Rodriguez the ball from his 3,000th career hit . . . and part of that money was used to purchase this equipment.

After all the kids and coaches arrived, Brian gave a short welcome speech:

He then introduced David and, to my surprise, looked over at me and shouted my name and told me to get out there with them. David and I each said a few words, and while it felt great to be acknowledged, it felt even better just to witness the kids and coaches excitedly opening the boxes and inspecting their new equipment. Check it out:

Here’s one of the coaches opening a box of catcher’s gear:

I overheard him talking about how much his guys were going to appreciate it. Keep in mind that these are schools in low-income communities where many people simply can’t afford this kind of stuff. The schools themselves don’t even have money in their budget for it either, so without the Yankees and Pitch In For Baseball, these teams would’ve continued to scrape by with old/crappy equipment, often with some items missing altogether.

In the photo above, did you notice the “Wilson” logo on the chest protector? Wilson Sporting Goods has partnered with Pitch In For Baseball and helped tremendously. They even made a special batch of gloves that are branded with the charity’s logo and website:

Here are some guys displaying their new warm-up shirts, complete with numbers on the back:

Here I am with a coach and a few of his softball players:

They were thrilled to have received new helmets, gloves, bats, and so much more. The coach was extremely thankful. We didn’t orchestrate that photo op. He flagged us down because he wanted to capture the moment and express how appreciative he was.

Same deal with this team:

Several other coaches approached me and shook my hand and thanked me. One of them even gave me a tote bag from his school with a branded thermos and umbrella.

Here’s a huge group photo with everyone:

Usually, when people donate money to charity, they’re happy to know that it’ll ultimately be used for a good cause, so to actually be here at Yankee Stadium and witness the impact of this equipment donation was extra-special. Remember when Pitch In For Baseball helped the victims of Hurricane Sandy? I was there for one of those events too, and I’ll never forget it.

After everything wrapped up with the kids and coaches, I got to take a quick peek at the field. Here’s the concourse (with lots of dumpsters) on the way there . . .

It felt weird to be there in February when it was like 25 degrees, but everything looked beautiful.

On the way out, I took a photo of David with two other employees from Pitch In For Baseball:

In the photo above, that’s Meredith in the middle (you might remember her from 8/4/15 at Citizens Bank Park) and Bri on the right. Great people. Great charity. I plan to fundraise for them again in 2016, so I hope you’ll consider making a pledge. Stay tuned for an official announcement.