This was the fifth and final stadium of my mini-road trip. My videographer, Brandon, did the driving, and as you can see in the photo below, we encountered a major storm on the way to Milwaukee:

Here’s another look at the clouds: 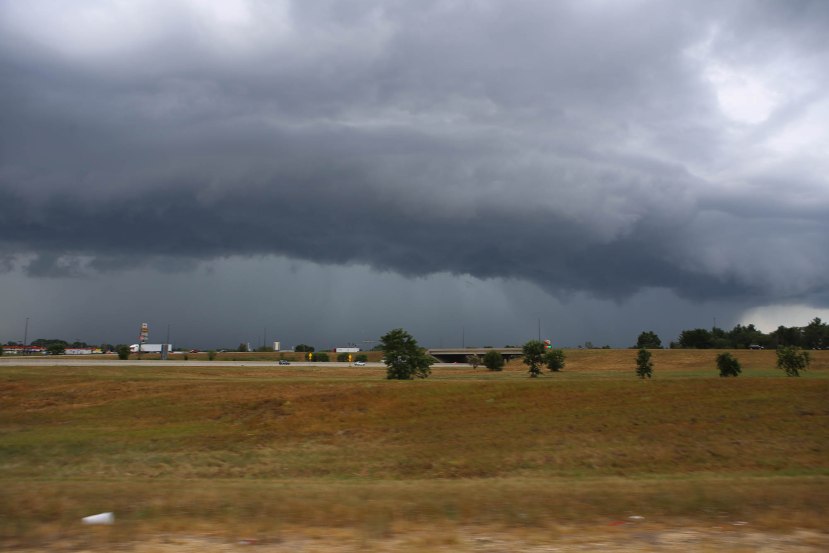 Brandon had recently done some filming for several storm-chasing groups in the midwest, so he did something that never would’ve occurred to me. He took the next exit, found a quiet street (beside a cornfield, of course), and pulled over. Look closely at the following photo and you’ll see him in the distance:

He’s kind of crazy. I love it.

Here’s a photo of me with the storm clouds looming:

Here’s another shot taken by Brandon: 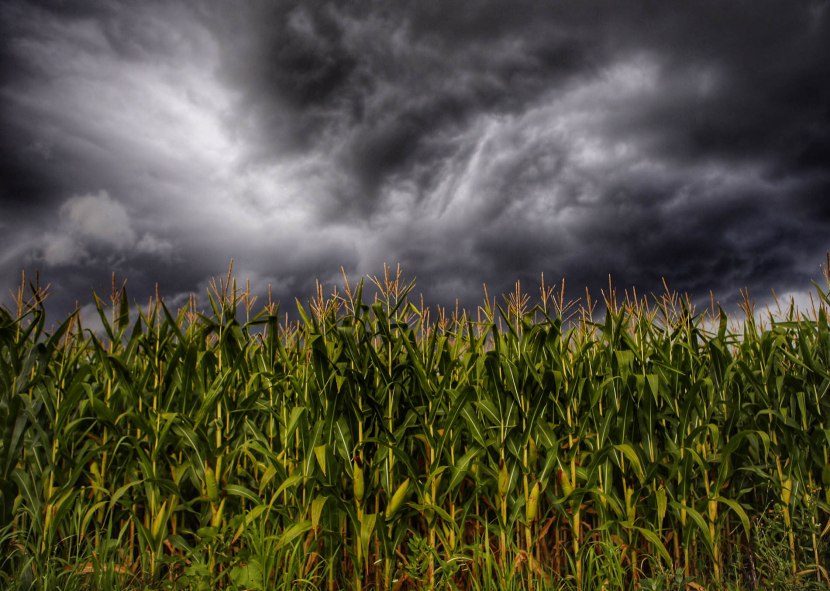 Wow. (Right?) He may have played with the contrast a bit on that one, but that really IS what it looked like.

I was getting nervous about getting drenched (if not killed by lightning or a tornado), but he was perfectly calm and enjoyed taking photos right up ’til the last second. Then he was like, “Let’s get back to the car,” and just as we walked across the street, we felt the first few drops.

During the rest of our drive, the heavy rain normally would’ve bothered me, but Miller Park, of course, has a retractable roof, so all I could think was, “Ha ha ha . . . BRING IT.” As it turned out, though, it was sunny when we reached our destination: 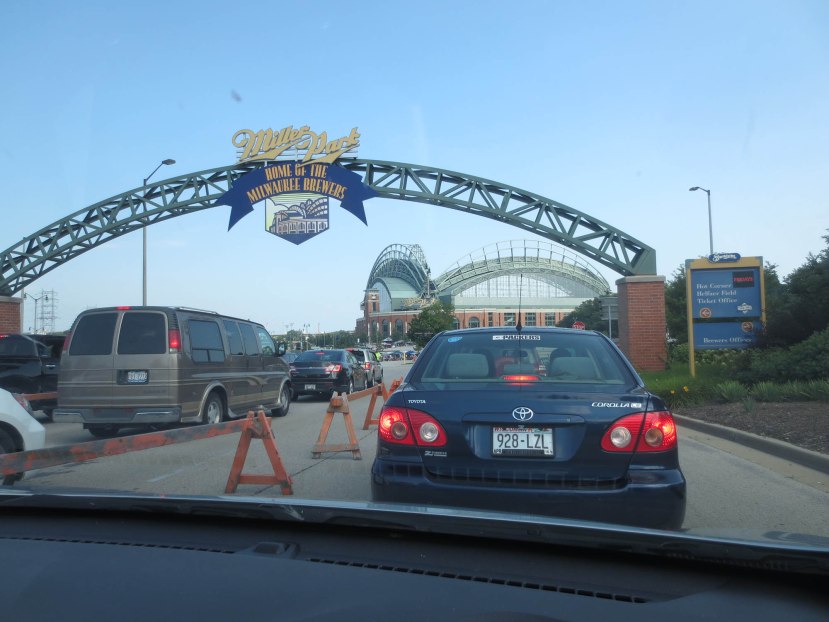 Why was there already a long line outside the Friday’s restaurant?! 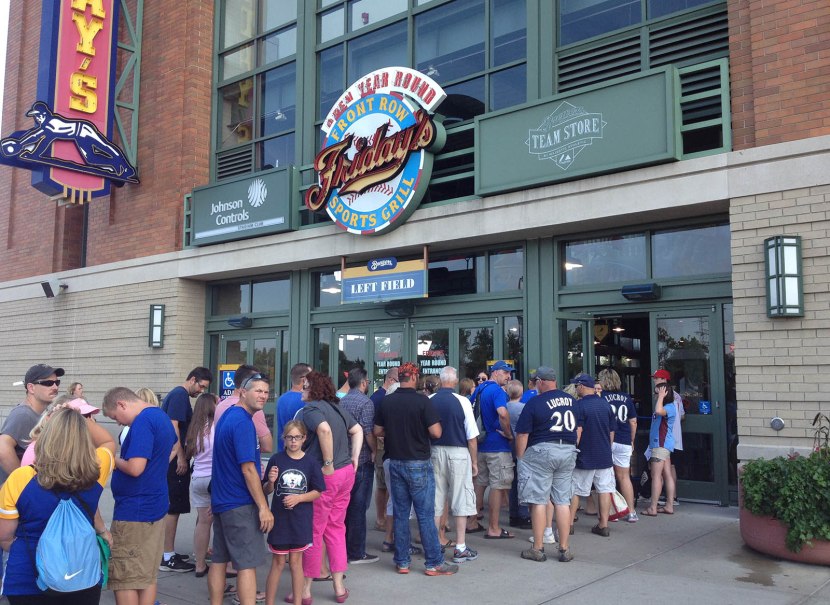 Oh, right, because I’m an idiot and didn’t realize that the game started at 6:10pm. Good job, me. And then, to make matters worse, the restaurant opened 20 minutes late — time I should’ve been able to spend out on the left-field terrace snagging baseballs. Here’s what the view looked like after we finally made it inside:

Here’s the terrace itself:

As you can see in the photo above, the overhang of the second deck makes it hard for home runs to land on the terrace. They have to be hit perfectly, but it does happen. And guess what? I got my first ball that way, with an unexpected assist from our waitress after the ball bounced up into the restaurant! How’s THAT for a weird way to get on the board? And yes, that counts. I’ve always counted balls that are given to me by stadium employees. Here’s a screen shot from the video that shows me with the ball and the waitress, whose name is Brianna: 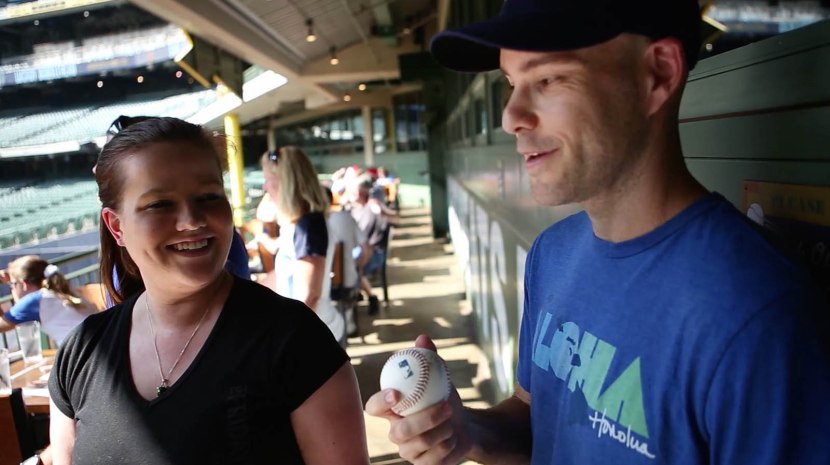 By the way, you’ll see the video at the end of this entry. Keep reading for now . . .

On game days at Miller Park, the tables on the terrace at Friday’s have a one-hour limit and a $30 minimum. In other words, there was a lot of food but not much time to eat it, so as you can see below, I had to stuff my face quickly between pitches: 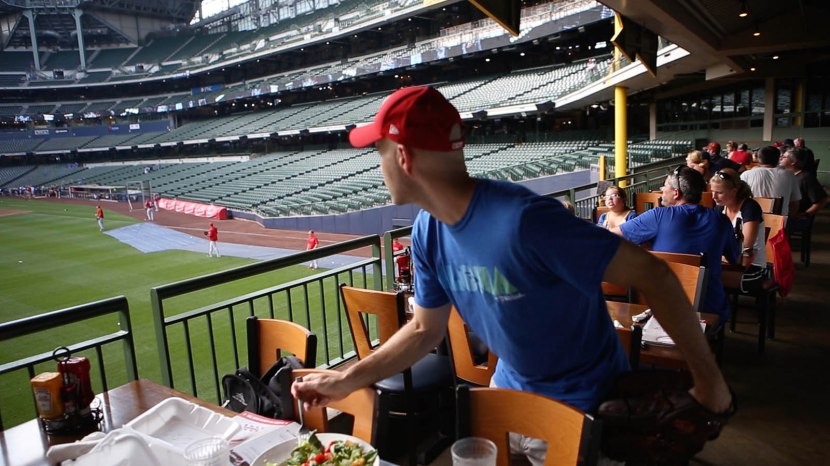 Here’s what we got:

I ordered the chicken caesar salad, and Brandon had a bacon cheeseburger with fries, so basically I’m going to live longer, but he’ll enjoy his life a whole lot more.

This is what we shared for dessert:

Oh yeah. To hell with longevity!

A little while later, Brandon got a shot of me being dissed by Phillies pitcher Elvis Araujo:

I was stunned not to get a ball from him because . . .

But no. No love from Elvis. And there weren’t any glove trick opportunities either. Remember this video of me using the trick there in 2013? I was hoping for more of that action this time around, but there just weren’t any balls that landed in the gap down below.

When the entire stadium opened, I still only had one ball. Very frustrating. I always want to put on a good show when being filmed.

. . . but didn’t like my chances there. Look how crowded it was:

I headed to the second deck with Brandon, and just as I was telling him to stop filming — that the entire day was a disaster and it just wasn’t worth it — I got Domonic Brown to chuck me a ball. Soon after that, I caught a home run (which I gave to the nearest kid). I’m not sure who hit it, but I can tell you that I made a decent play, drifting down several steps to the front row and reaching out for the snag. (You’ll see footage of this in the video.)

I went to the second deck in left field for the last two groups of BP: 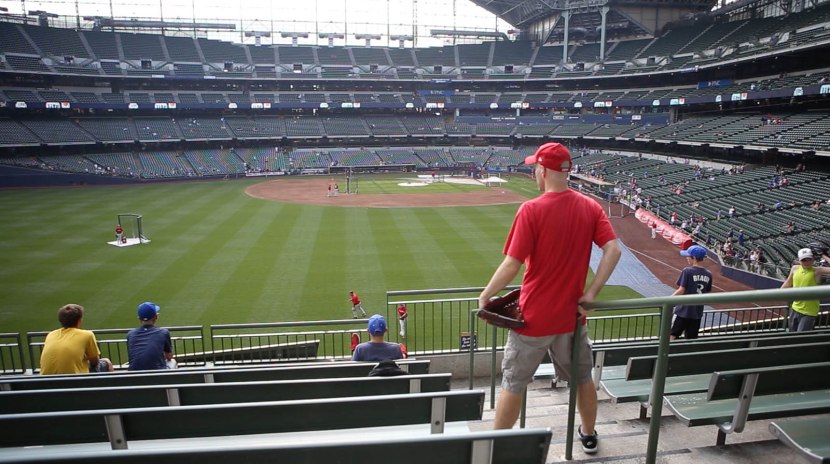 As you may have noticed, I had put on my red Phillies shirt to complete my outfit, but it didn’t help. No action whatsoever. I nearly snagged a homer that landed one section to my right, but eh. I just wasn’t feeling it, and once again, I wondered if it was worth completing the video. I was thinking of scrapping it and returning to Milwaukee next year to try again.

After BP, I peeked into the Brewers’ bullpen and got VERY excited:

See all those baseballs sitting around? I wasn’t sure which ones I could reach with my glove trick (without getting ejected), but figured I’d have a good shot at the one in the back left corner. See which one I mean? It’s just beyond home plate near the green padded wall.

Here’s another look at it from above:

As you can see, it was blocked by a mesh awning-like thing, but I knew I could still get it.

Having changed back into my blue shirt and black cap (so as not to draw any extra attention), I carefully leaned out over the railing and worked my magic. Here’s a screen shot from the video:

Moments later, I raised my glove with the ball tucked firmly inside:

That was my fourth ball of the day, and it felt goooood. And I wasn’t done. Did you notice the camera man watching me in the previous photo? I won’t claim that he gave me permission to enter his special off-limits area. I don’t want to get anyone in trouble, so let’s just say that when I asked, he simply shrugged and pretended not to notice (though he did have a faint smile on his face). Here’s a closer look at him:

Here’s what the bullpen looked like from there — note my videographer circled in red up above:

I went back to work, snagging the next ball easily . . .

. . . and handing it to the camera man — a small thank you. Then I struggled for a bit with the ball in the corner because it was kissing the padded wall, and I had to tap it just right in order to move it out. But eventually I got that one too, increasing my total for the day to six.

For the first time ever, the little party deck area in right-center field was not being guarded by security, so I wandered in and hung out for a while before the game. Here’s what it looked like as Jerome Williams warmed up: 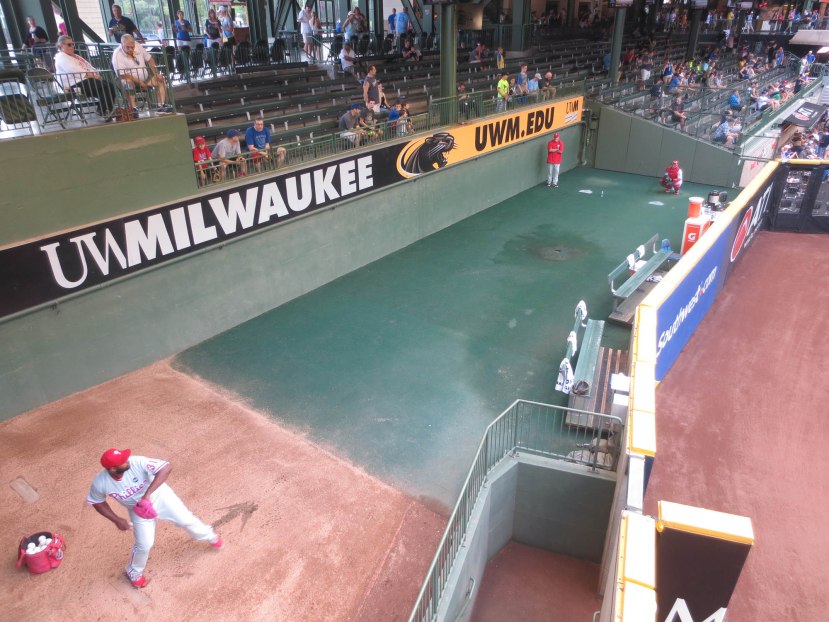 This was the view directly behind me:

That’s a great place to run back and forth for home runs. Remember, catching batted balls is all about having lateral mobility, so anytime there’s an aisle in the outfield, that’s pretty much where you want to be.

I resisted the urge to stay there, instead opting for my favorite foul ball spot in the major leagues: the wide/perfect aisle at the back of the second deck. First check out my view for right-handed batters:

Now look at all this space I had:

Amazing. I love it there so much. If I attended all 81 home games at Miller Park in a single season, I believe I would snag 100 foul balls. That might sound crazy, but I’m serious. In my six previous games here, I had snagged five foul balls (and would’ve had more if not for some stupid luck).

I was hoping that Brandon would be able to film me catching a foul ball, but I told him not to stress it. The pitching matchup was awful for my purpose (two soft tossers), so the odds seemed slim.

Brandon ended up wandering off in the middle innings and taking lots of photos, including this one from the upper deck:

As for me, I got into some (playful) trash-talking with an old guy who told me that the next foul ball was his. He even (playfully) threatened me with his cane:

The next foul ball turned out to be the ONLY foul ball that reached the aisle, and of course I caught it:

And of course Brandon was nowhere in sight. Cesar Hernandez hit that ball off Jimmy Nelson with two outs in the top of the 7th. I drifted about 15 feet to my left and caught it on the fly in “light traffic,” which is to say that there were several other folks nearby, but not much competition.

Later on, the old guy returned with a wacky hat and posed for a selfie with me and the ball:

Here I am standing in the aisle late in the game:

That’s pretty much how my night ended. Seven total balls . . . one from a waitress, one toss-up, one BP homer, three with the glove trick, and a foul ball during the game. Given how poorly things had gotten started, I was quite pleased with how it all turned out.

Brandon and I did not stay for the post-game Goo Goo Dolls concert. We headed straight to the car . . .

. . . and made a stop at a place called Kopp’s, which has THE best frozen custard in the known universe. I can’t even describe what I got. Just look at it:

Nice way to end the trip.

Here are the five balls that I kept: 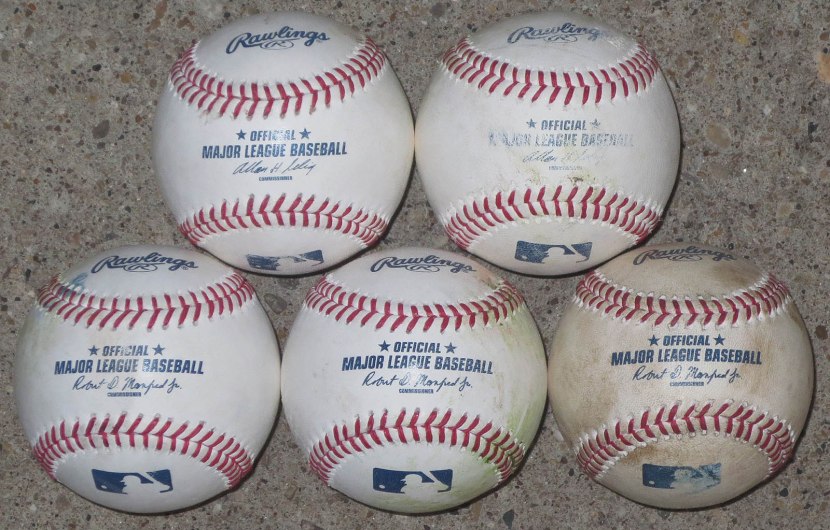 Did you notice that two of them have the old commissioner’s signature? Doesn’t matter to me — just an interesting little detail. And now, as promised, here’s the video:

• 1,131 consecutive games with at least one ball