My day started with a live radio interview on 610 AM Sports Radio in Kansas City. Here I am in the studio waiting to get on the air:

I was on a show called “The Day Shift” with Lake and Bink, aka Jay Binkley and Henry Lake. Here I am with them after my segment:

Great guys. They had interviewed me a few seasons ago, and I kept in touch with Jay, so when I told him I was going to be in town, he asked me to drop by the station. Pretty simple. We mostly talked about the highlights from my summer — snagging A-Rod’s 3,000th hit and hanging out with Lisa Ann. What else is there?

On the way out, I couldn’t resist photographing this tornado sign:

Back home in New York City, we don’t have stuff like that.

For lunch I met up with my videographer, Brandon, at a BBQ place that was highly recommended by a local friend. It’s called Q39, and as you can see below, I was excited to try it out:

Here’s what I got:

You’re looking/drooling at ribs, chicken, brisket, and baked beans. SO GOOD. Before the meal, we had planned to get ice cream for dessert at a different place, but we ended up being so stuffed that we had to skip it. Thankfully we burned off lots of calories during the long, inconvenient walk toward the stadium: 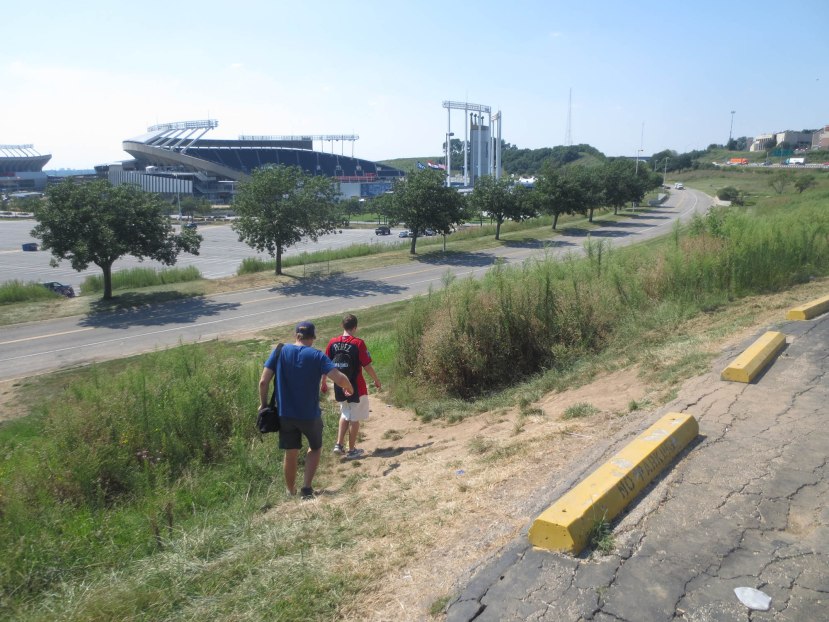 In the photos above and below, that’s Brandon in the blue shirt and my local friend in the PEREZ jersey. This friend wishes to remain anonymous, so don’t guess his name or identify him, if you know. But anyway, look at this scenic-but-ridiculous route we had to take:

Some places are made for pedestrians; the area surrounding Kauffman Stadium is not one of them.

Question: what happens when a team makes it to the World Series and is in first place the following season and it’s the summer and the weather is perfect and it’s a Friday night with fireworks and Mike Trout is town?

Look how many people were lined up outside the stadium THREE HOURS before game time:

That wasn’t a line for regular entry. All of those people had purchased additional tickets (on top of their game tickets) for the “Early Bird BP Tour.” I’ve blogged about it in the past. Basically it gets you in the stadium two and a half hours before the first pitch, but for the first 60 or 90 minutes (depending on the day of the week), you’re confined to the seats behind one of the dugouts.

When I had done this in previous seasons, there were very few fans, most of whom chose to hang out behind the Royals’ dugout. Now it was an absolute zoo:

Oh! And perhaps I should mention that just before we entered the stadium, an employee used a megaphone to announce that the Angels would not be taking batting practice. So yeah, that’s why I was so scowly in the previous photo. Forgive me, okay? All I wanted to do was grab a spot behind the Angels’ dugout and have a brief conversation with Mike Trout. Is that so unreasonable? He always waves to me from afar because I can never get close to him in New York. This was supposed to be my chance to finally reconnect with him. Do you think I wanted to attend a sold out game on Fireworks Night? No! But I was willing to suffer through it because of Trout.

Because of the lack of BP, the employee with the megaphone offered everyone a refund. No one stepped out of line to take her up on it, and life went on.

Here’s what it looked like when the “Angels dugout” group headed down into the seats from the Royals Hall of Fame:

In the photo above, the fan with the blue drawstring backpack is named J.T. — more on him in a bit, but for now, look how dead things were behind the dugout: 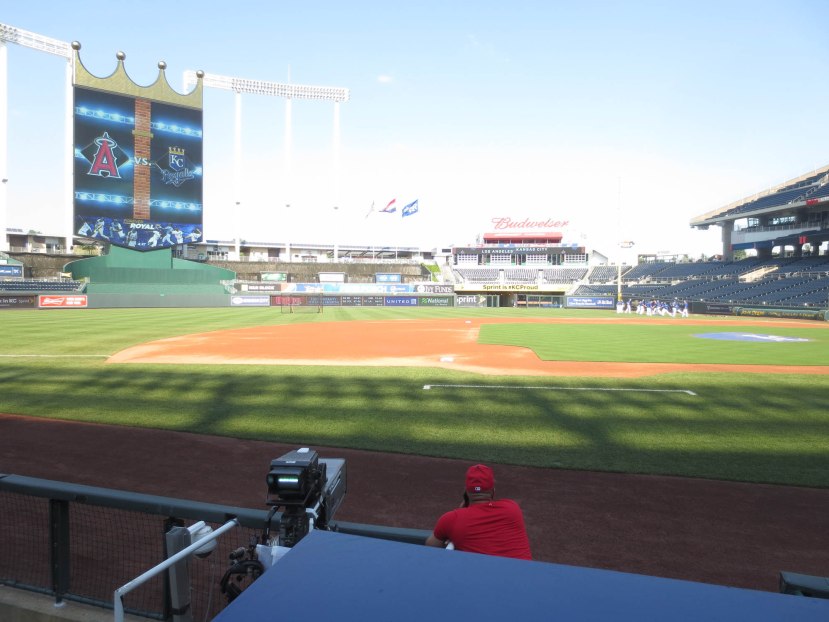 Did you notice the Royals warming up down the right field line?

After a while, two Angels began playing catch in shallow left field:

I did not get that ball.

I didn’t get anything until the rest of the stadium opened at 5:30pm. The Royals were already hitting at that point, and I had my eye on a ball that one of their lefties had sliced into the seats: 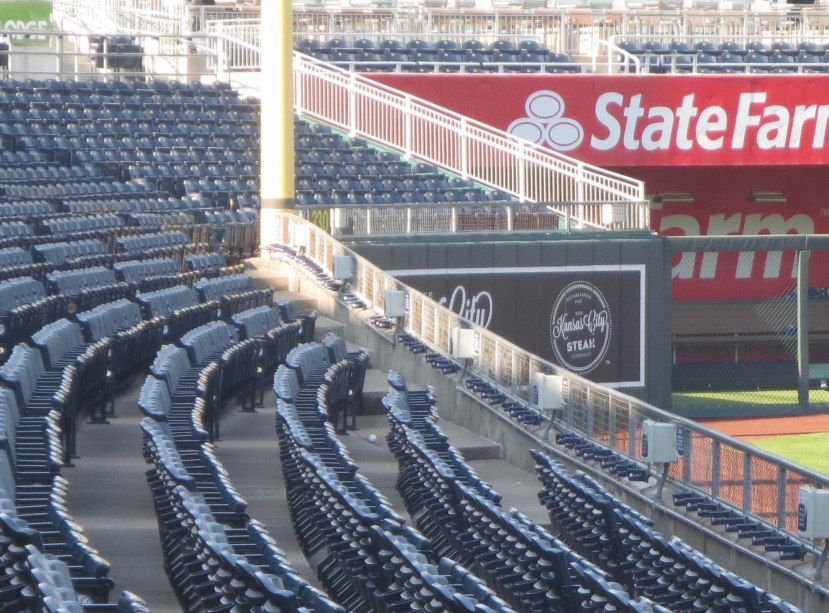 J.T. had his eye on it too for quite some time, but he didn’t seem to be watching when an usher wandered over and picked up the ball and placed it in a cup holder. I ended up racing over and grabbing it — and then giving it to him. He had gotten in touch with me on Twitter several days earlier and had been looking forward to meeting, so he was pretty psyched to get a ball that I had snagged.

Moments after I grabbed that ball from the cup holder, a righty on the Royals crushed a home run onto the walkway near the left field bullpen. There weren’t any other fans out there yet, so I ran over and got that ball too.

Brandon filmed me throughout the day for my YouTube channel. Here’s a screen shot from the video that shows me catching a home run — my third ball of the day:

I caught another one several minutes later and ran all over the place during BP. Here I am heading behind the batter’s eye toward right field:

Here I am heading back to left field:

Here’s what it looked like on the Pepsi Porch back in right field:

It wasn’t exhausting to run around nonstop for 20 minutes. On the contrary, it was refreshing and extremely fun — a total change of pace from all the games where there’s no good standing room in the outfield and security is crazy-strict. 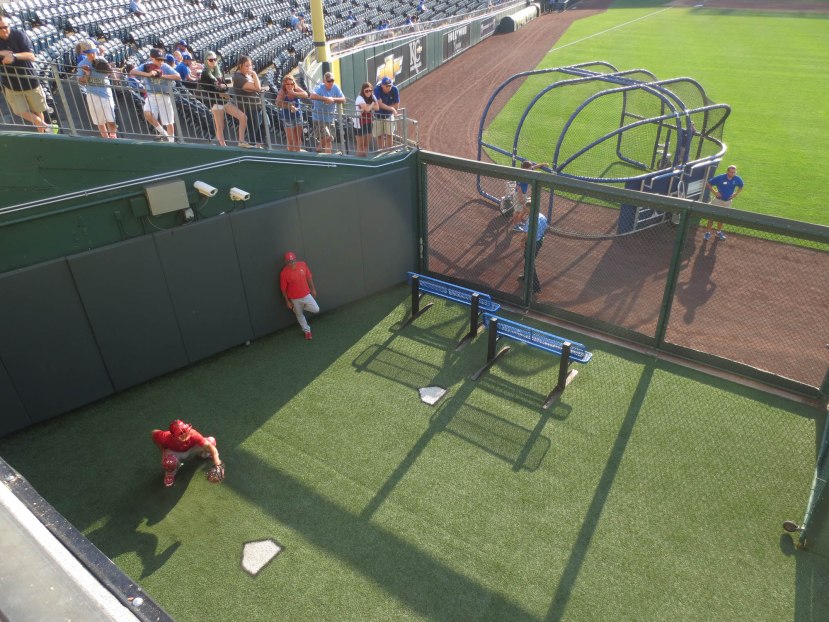 . . . to say hello to Angels bullpen catcher Tom Gregorio, who ended up tossing me a ball without my asking. That was my fifth of the day.

Then I caught up with my buddy Tang, who’s a talented/regular ballhawk at Kauffman Stadium: 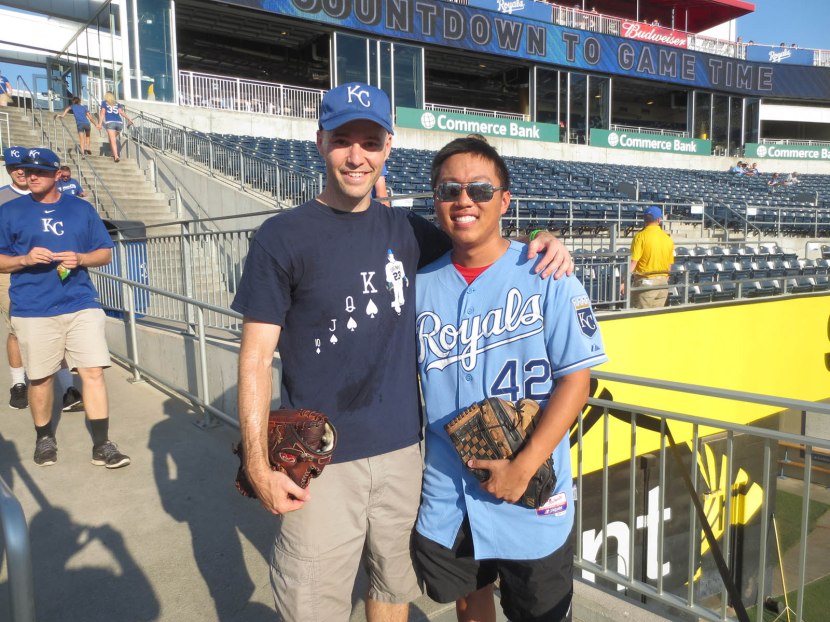 Before the game, I headed to the seats along the left field foul line: 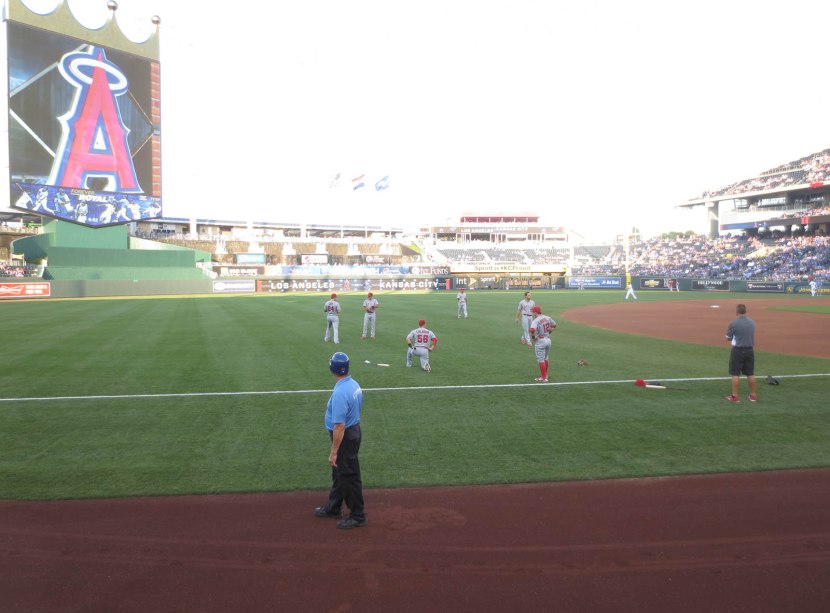 Once again I was hoping to say hey to Mike Trout, and this time it happened . . . quickly. Take a look at the four-part photo below: 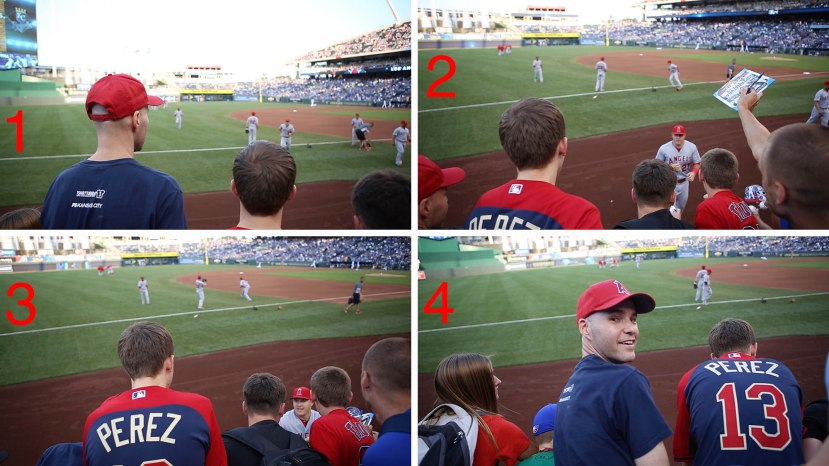 In the first photo, he was starting to jog into foul territory.
In the second photo, he spotted me.
In the third photo, he veered toward me and I bent down to shake his hand.
In the fourth photo, I was happy.

I think it’s pretty cool that he came over to me first and then began signing for everyone else. Here’s a photo of him doing his thing:

Look how close I was:

Here’s a Mike Trout autograph that someone else got — not exactly the best handwriting:

This was my view from right field during the game:

Look how much space I had on my right:

It probably would’ve taken a 430-foot home run to reach me, but whatever. I was just glad NOT to be trapped in the usual sea of seats and people.

Here’s a look at the left field walkway (and Brandon’s camera/microphone) a little while later:

Here’s a photo from the upper deck: 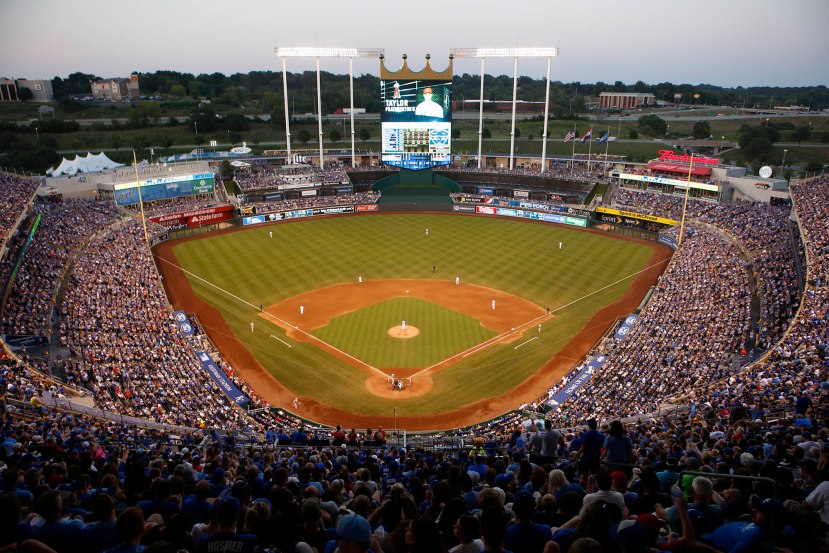 Here I am in the middle innings with J.T. and two of his friends:

In the photo above, the kid on the left in the light blue shirt is named Dakota. J.T. is standing next to him in the white Jersey (and by the way, you can follow him here on Twitter.) The young man in the dark blue shirt is named Finn. It was fun hanging out with them.

Late in the game, something happened that I’d been warned about. The standing room area in right field had gotten so crowded that the walkway to get over there was blocked by a guard in left-center. Look at this nonsense:

What a cruel man, that monster in the yellow shirt — enjoying his job a bit too much and denying my freedom as an American citizen!

But really, take a closer look at his face:

That’s the definition of smug.

Here’s Trouty on the jumbotron in the 7th inning:

Did you notice how crowded it was in the walkway? That’s what happens when you don’t let anyone walk over to right field. (In case you can’t tell, I HATE BEING CONFINED.)

Here’s Trout schmoozing with his much less talented teammates during an inning break:

It’s very nice of him to treat them as if they’re important.

Brandon took the previous photo, as well as the next one: 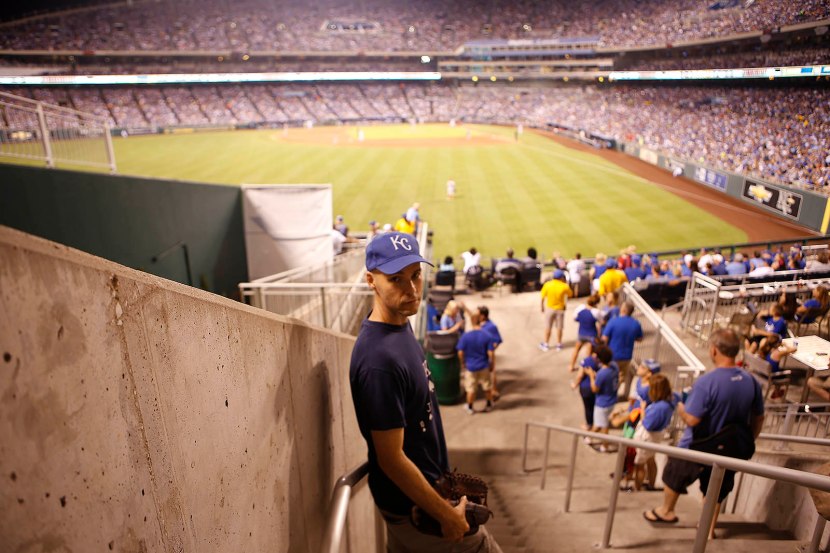 A little while later, the Royals wrapped up a 4-1 victory. I was already outside the stadium by the time the fireworks started . . .

. . . and I’d made it across the highway before the stadium had cleared out:

As I mentioned in the video, which you can see below, we were gonna have to drive 560 miles overnight to Milwaukee — the last stop on our little five-day/five-stadium road trip. Good times in the midwest!

• 1,130 consecutive games with at least one ball

• 25 donors for my fundraiser