Being “famous” is weird.

This was my first game back at Yankee Stadium after snagging Alex Rodriguez’s 3,000th career hit, and to put it lightly, all eyes were on me. Check this out:

I have no idea who took that photo, and I forget how I even got that screen shot, but yeah, see what I mean? It wasn’t just weird — it was downright creepy and disconcerting.

In the photo above, the man standing near me was on the verge of becoming a key figure in all this crazy A-Rod stuff. His name is David Rhode, and he’s the executive director of Pitch In For Baseball, the charity that I was hoping to bring into the mix. On the night that I snagged the ball, I had a meeting with Yankees President Randy Levine, who told me that the team might make a sizable donation to the charity. After thinking about it all weekend (and trying to ignore all the hateful messages from people who had NO IDEA what was actually going on), I agreed to have another meeting with him back at the stadium — with David.

The Yankees had given me two comp tickets in right field — one for David and another for my friend Ben Weil — but there was no VIP treatment beyond that. We still had to wait outside the gates like everyone else.

I wasn’t sure how other fans would react to me. Would they be pissed off that I hadn’t given the ball to A-Rod, or would they be excited to meet the guy who had snagged it? Thankfully it was the latter. Everyone outside Gate 6 recognized me, and after posing for a bunch of selfies with them, they let me take their photo:

With the exception of two dimwitted kids who screamed and cursed at me later in the day, everyone I met was really cool. The negativity, it seemed, was mostly confined to the internet.

This was my view at the start of batting practice:

Thirty seconds later, a left-handed batter on the Yankees (not sure who) launched a deep home run over my head into the bleachers. Since there weren’t yet any fans up there, the security guard who retrieved the ball tossed it down to me. I *do* count balls that are given to me by stadium employees, so that one extended my consecutive games streak to 1,100. Since September 10, 1993, I’ve snagged at least one ball at every game I’ve attended.

A little while later, I battled the sun to catch a home run on the fly. Once again, I wasn’t sure who hit it, but I can tell you that the next ball I got — a homer that landed near me in the seats — was hit by Garrett Jones.

Here’s a photo that David took during batting practice:

As you can see, it was kinda crowded, but not totally crazy.

In the photo above, the fan in the Pineda shirt respectfully said that he thought it was messed up that I didn’t give the ball back to A-Rod. I told him that I appreciated his willingness to discuss it with me.

I managed to catch one ball during the Phillies’ portion of BP — a towering homer by Ryan Howard that no one else around me even saw. It was strange to be the only one moving for it, but hey, thanks everyone! 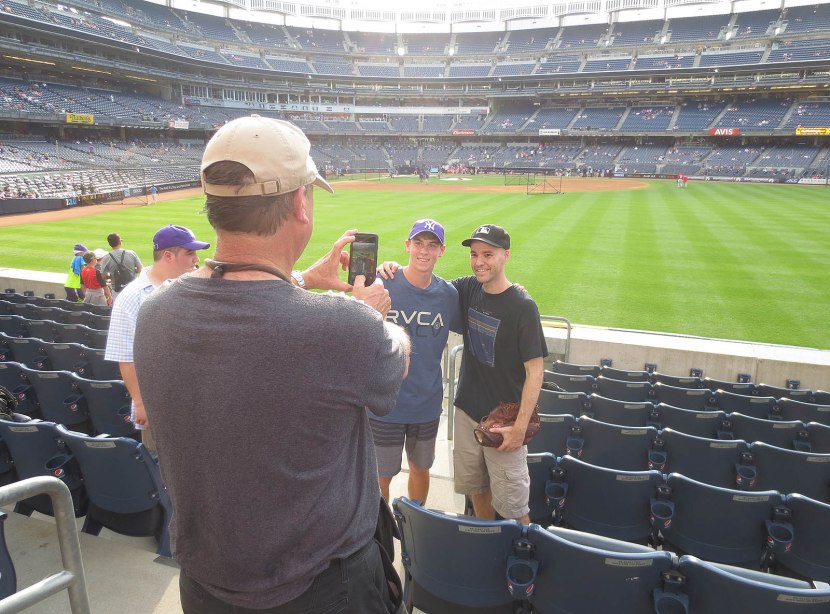 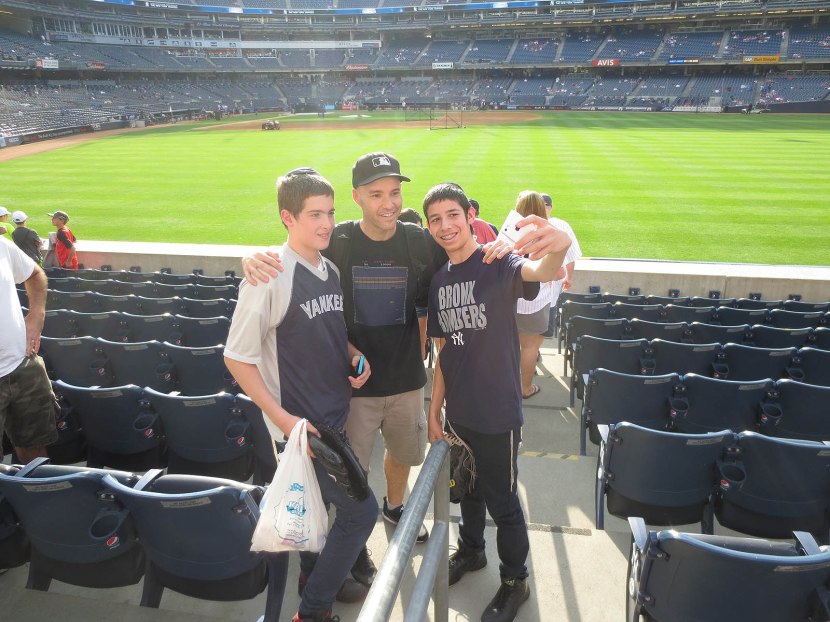 Shortly before game time, I got Phillies starter Kevin Correia to toss me his warm-up ball from the left field bullpen:

That was my fifth of the day.

Randy Levine had suggested meeting at game time up in his office on the Suite Level, but guess what? Yankees 3rd baseman Chase Headley had 99 career home runs and was due to bat in the 1st inning, so I asked if we could possibly work around that.

“I know what’s going to happen,” I told him. “I’m going to be in your office and Headley is going to hit his 100th career homer right to my seat.”

I really didn’t mean to be difficult — Randy, of course, is a busy and powerful man — but some things are just too important, and he understood. In fact, I think he might have actually gotten a kick out of my dedication to my hobby. He suggested that I stay in my seat until after Headley batted and then come up and see him with David. What a guy!

Here’s a photo of Ben (who can never make a serious face) and David in the top of the 1st inning:

In the bottom of the 1st, I sat on the edge of my seat for Headley, who ended up ripping a line-drive single to center field. (Boo!) Then, hoping that Randy wouldn’t mind if we took an extra minute, I lingered for A-Rod, who batted next . . . and struck out. (Frowny face.)

David and I headed to the suite entrance on the lower level behind home plate, amusing ourselves along the way by imagining the reaction of the security guard when I would soon waltz in, cargo shorts and all, and state that I was there for a meeting with Randy Levine.

Not surprisingly, the guard telephoned his superiors to make sure this wasn’t a prank:

And then, like magic, we were welcomed farther inside the otherwise impenetrable fort. Moments later, a very very VERY large and physically fit guard escorted us upstairs and through the suite level concourse and eventually into the executive offices (where I had first met Randy three days earlier). While waiting for him, I grabbed a quick photo of David in the hallway:

The meeting lasted for a while, but it was worth missing one or two of Chase Headley’s at-bats, even if he DID hit one right to my seat. In addition to Randy, there were several other high-ranking Yankees executives, including:

This was serious. And I was wearing cargo shorts. But hey, whatever, right? I’m just the guy who catches baseballs.

The main purpose of the meeting was for the Yankees and Pitch In For Baseball to come face to face and try to work out an agreement. In other words, if I gave the ball back to A-Rod, what would the Yankees do for the charity? After lots of discussing back and forth, Randy asked us if we could step out in the hallway and give them some time to talk amongst themselves.

David was pleased with what the Yankees offered: a package that not only would include a large donation, but also continued support for years to come. To quote him, it was a “game-changer.” But nothing was official at that point. The Yankees still had to investigate Pitch In For Baseball — or perhaps “research” would be a better word. They weren’t going to write a huge check without learning more about the recipient, and if they ended up feeling dissatisfied with the charity in any way, the potential deal would fall apart. In addition, there was also my so-called wish list to consider. If I asked for too much or was too demanding in asking for it, that could also ruin everything. David and I discussed all of this in the hallway for a few minutes until we were called back in.

That’s when Randy asked me what sort of stuff I was interested in, and when I told him that I hadn’t prepared a formal list or even thought much about it, he encouraged me to name a few things. I tried to come up with a few ideas, but can you imagine the pressure of being put on the spot like that? Randy could tell that I was getting flustered so he told me I didn’t have to come up with everything right now — that I should take a few days and think about it and call him mid-week. Then he said something that made me feel great. He told me that I didn’t have to treat my wish list like a one-shot deal. He said he really liked the way I had handled everything and conducted myself, and that he wanted to work with me and treat me like I was “part of the Yankee family.” Assuming I’d give the ball to A-Rod, Randy said that in the future, if I think of anything else I want that I forgot to include on the list, I could always ask him, and if it’s possible, he’d try to help me out. That sounded so much better than having everything in writing and bringing in lawyers and making a legal mess out of the whole thing. I had snagged a baseball. They were offering to help a charity. No reason for it to be difficult.

Toward the end of the meeting, while I was talking about something, David cut me off and said, “Sorry to interrupt, but I just want to speak up on Zack’s behalf because I think he’s being shy or maybe he just forgot. Can you guys send him to the Home Run Derby and All-Star Game?”

The answer was yes. Randy told Brian to make a note of it, and voila! That’s all it took! So awesome. Huge thanks to David.

Once again, nothing was official, but the basic structure of the potential deal was in place. There was still a LOT more discussing and planning and agreeing to be done, but David and I both felt good about things — and I think the Yankees did too.

(Just another night at the ballpark, huh?)

I don’t remember what inning it was when David and I made it back down to our seats. I do know that the game had been a slugfest, and Maikel Franco was killin’ it: 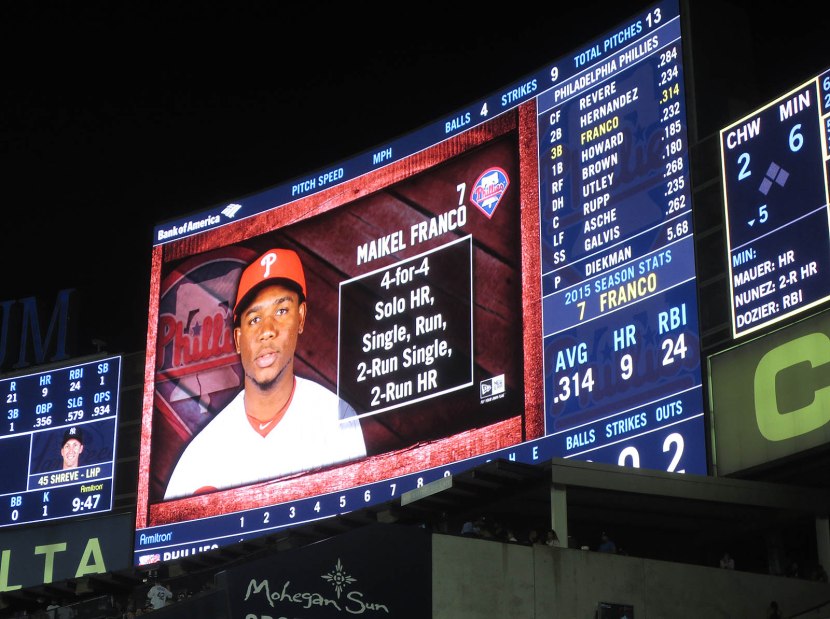 Late in the game, I had a series of sweet interactions with a little kid sitting nearby. His parents had been trying to get a ball for him, so I made things easier and handed him one of mine instead: 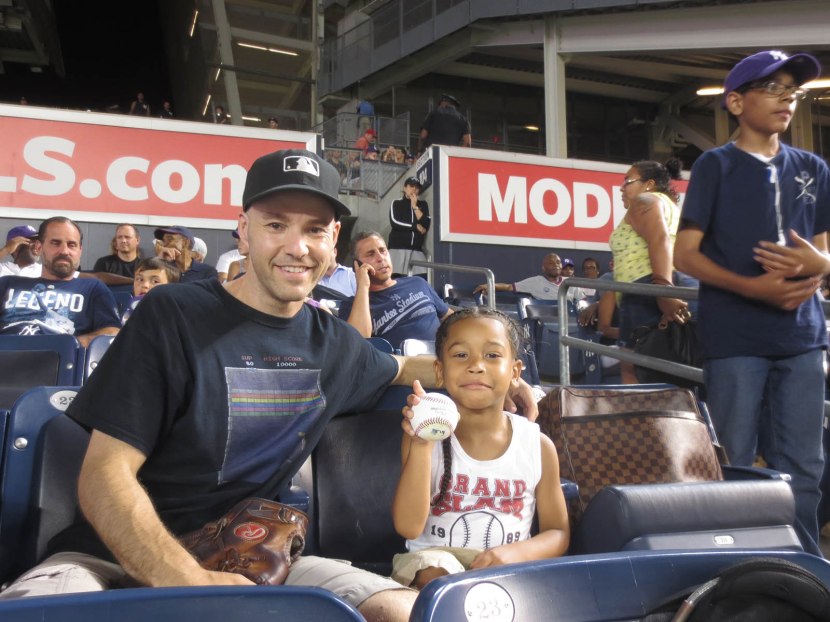 David tweeted about it from the official Pitch In For Baseball Twitter account, and guess what happened? A bunch of haters got worked up into a frenzy, claiming that I hadn’t actually given the kid anything — that I was just posing with a random kid who already had a ball, or that I had handed him the ball just for the photo. At the stadium, people were great, but on the internet, it felt like everyone wanted to hate me — that this story somehow needed a villain and that role was being assigned to me.

The Phillies ended up winning the game, 11-8, and I walked out of the stadium feeling like a champ. There was a chance that A-Rod was going to receive his precious baseball after all and that my favorite charity, which I had been supporting on my own since 2009, was going to be VERY well taken care of.

• 5 baseball at this game

• 1,100 consecutive games with at least one ball

• 764 consecutive games in New York with at least one ball

• 269 consecutive Yankees home games with at least one ball

• 18 donors for my fundraiser