When I first started ballhawking, I kept all the baseballs in my old childhood bedroom at my parents’ place. My folks were never happy about the amount of space that my collection took up, but I convinced them to let me keep it there. What didn’t fit (or rather, what wasn’t allowed to remain) in the bedroom got moved to this DISASTER of a storage locker. Here’s what it looked like several years ago: 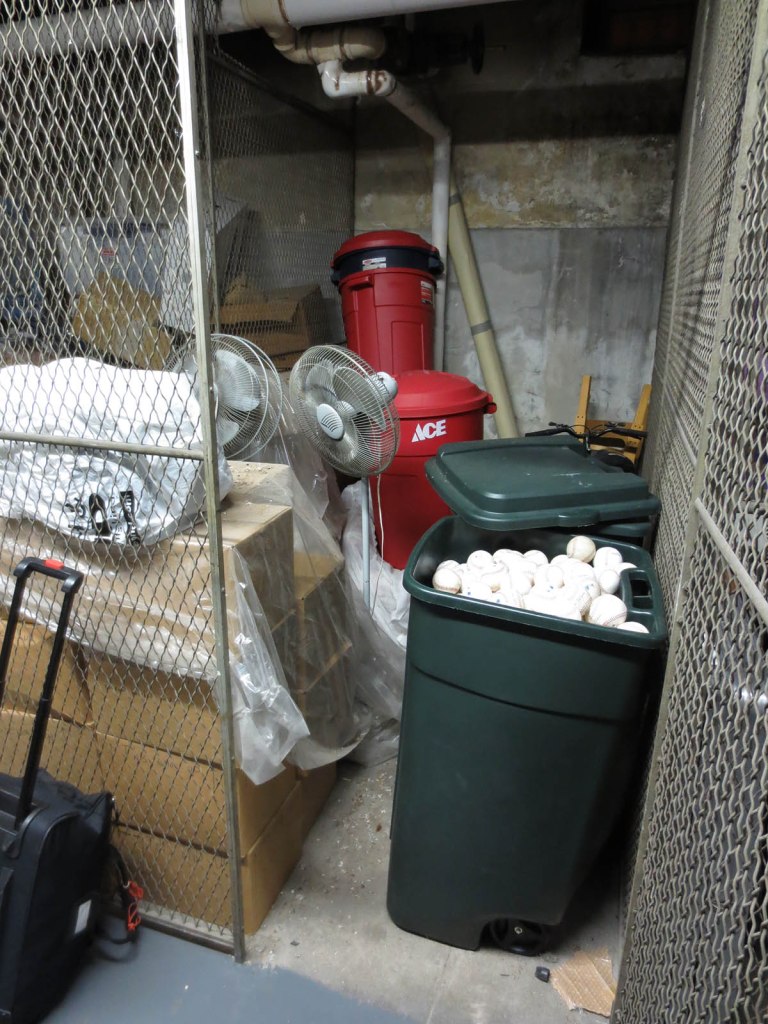 Here’s another old photo of the locker:

The big green bins (pictured above in the back left corner) hold 600 balls apiece. The smaller barrels each hold 400.

Sometimes, when the media interview me about my collection, I’ll move several barrels to a more charming location. That’s why the following photo makes it look like there’s space . . . 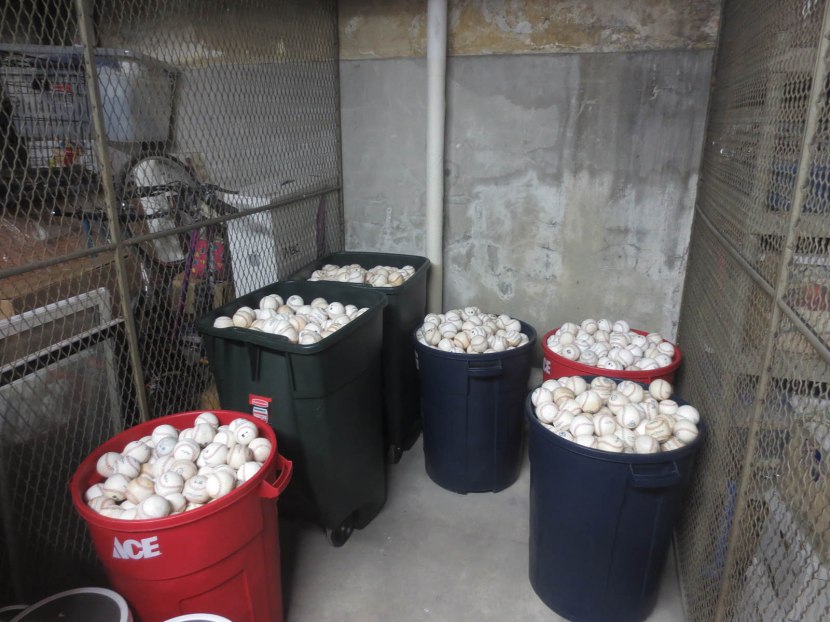 . . . but it probably only stayed that way for a day or two. For the last few years, the locker has been FILLED with barrels holding more than 5,000 balls, and yes, I know this is officially a First World Problem, but I’ve been stressed lately about storage space.

This past weekend, I took a little road trip to the Bronx:

No, I didn’t visit Yankee Stadium, but it just so happened that my route took me right past it. My destination was a lumber yard, and I brought a special friend with me: 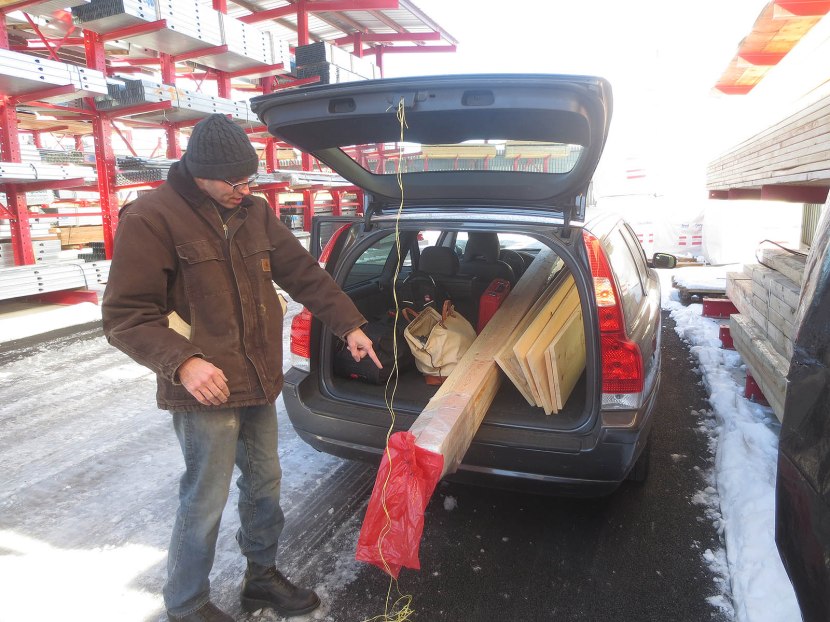 His name is David. That’s him in the photo above, and as you can see, the wood took up all the space in our station wagon — and then some.

I drove *very* carefully to the storage space. Then I dropped off David with the wood, returned the car to the garage, and grabbed us some lunch. When I finally made it back, I was surprised to see that David had moved all the barrels out of the locker:

The locker was empty, except for a few planks of wood that he’d placed in there: 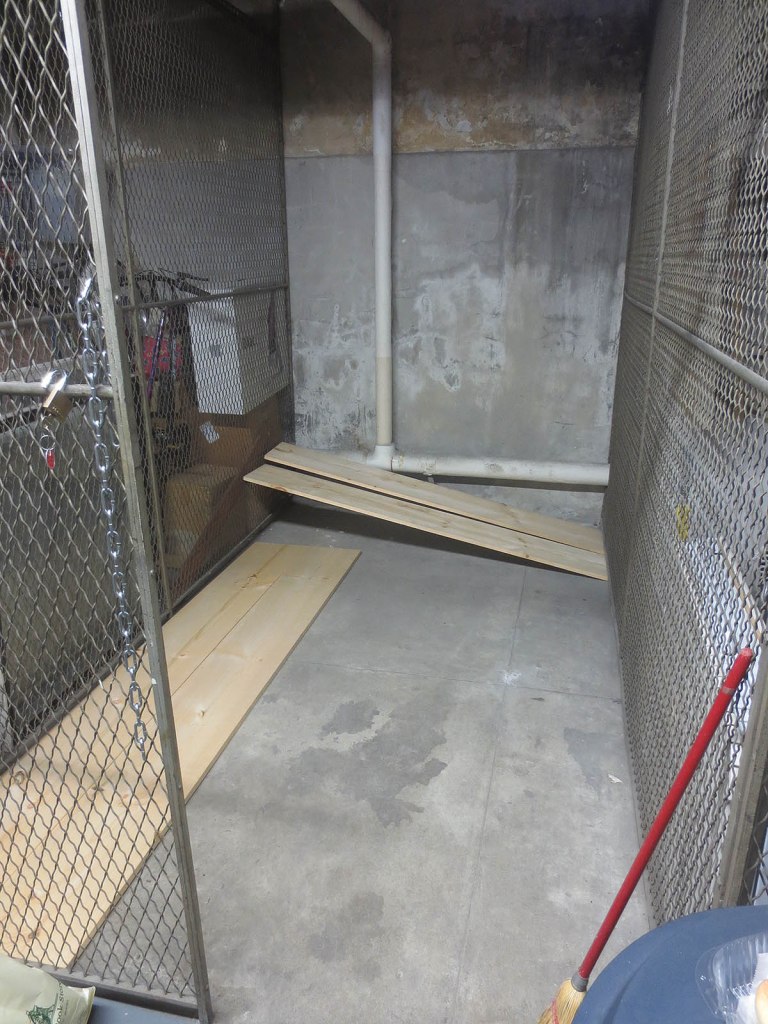 I should mention that David is super-handy. He used to work as an elevator mechanic. Now he repairs trains for the MTA. There’s truly nothing that he can’t build or fix. Several weeks earlier, I had told him that I wanted an L-shaped storage unit built into the locker. More specifically, I wanted it to have a little platform so that if there’s ever a flood in the basement, the barrels will be elevated several inches off the floor. I also wanted it to have a sturdy countertop that could support a second layer of barrels.

While David took some measurements, I dumped my final batch of balls from the 2014 season into a brand new barrel:

Storing baseballs in barrels doesn’t allow me to be nearly as organized as I’d like. The best I can do is keep the commemorative balls on top: 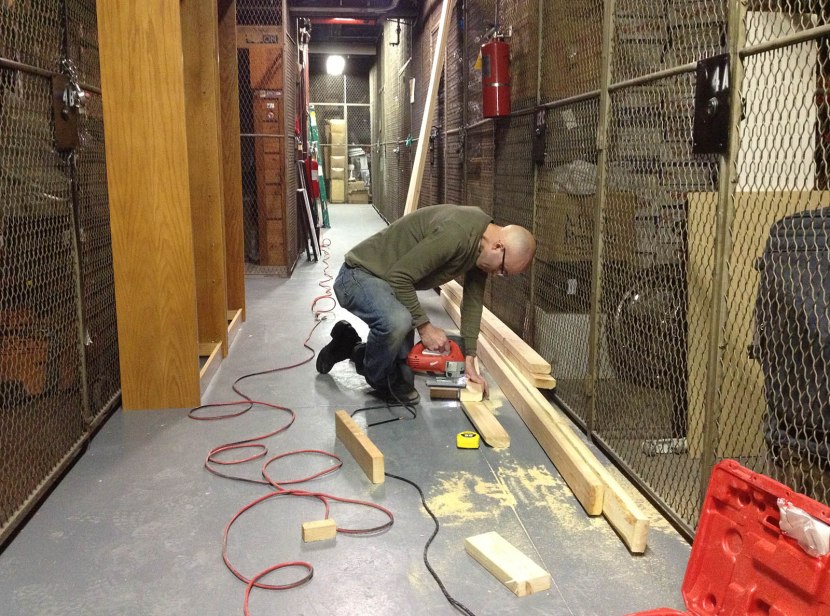 The project was taking much longer than we’d expected, and for a while, I wondered if it was even going to work. But it HAD to work.

Here’s another photo of David going at it: 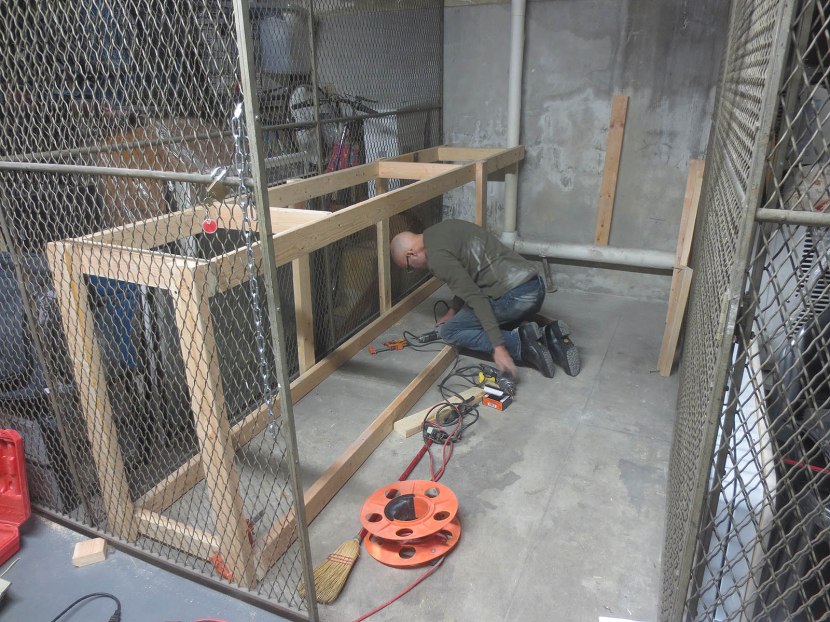 At one point my mom showed up to say hello and check in on our progress. 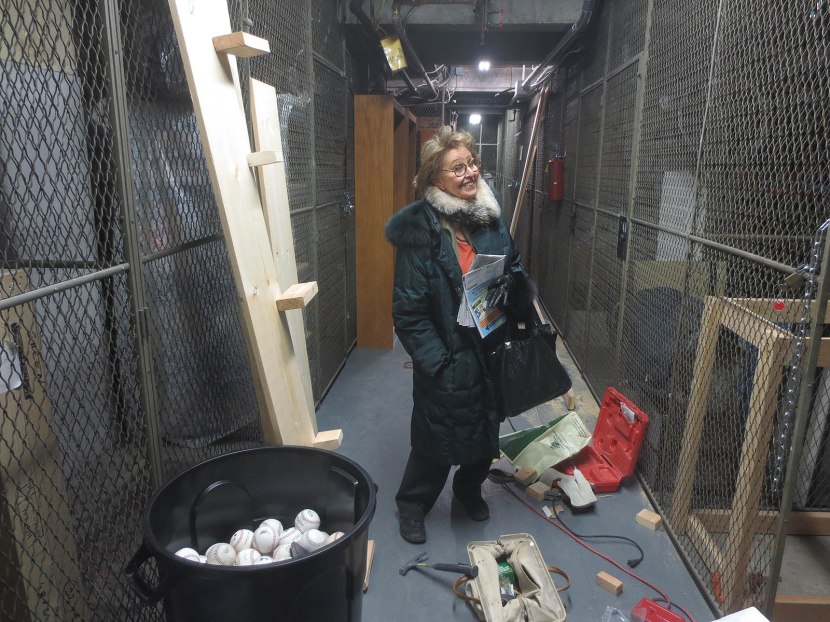 After several hours, the countertop was finally in place:

At some point late in the evening, David told me to start getting the barrels ready to be moved into the locker. I interpreted that to mean: “Take the lids off all the barrels to see which balls are in them and if there’s any extra space to squeeze in a few more.” Some barrels were filled with standard Selig balls, while others brimmed with commemoratives:

I know I’ve snagged 67 different commemorative balls (here are 64 of them in one photo), but I don’t know how many total balls I’ve gotten with commemorative logos. 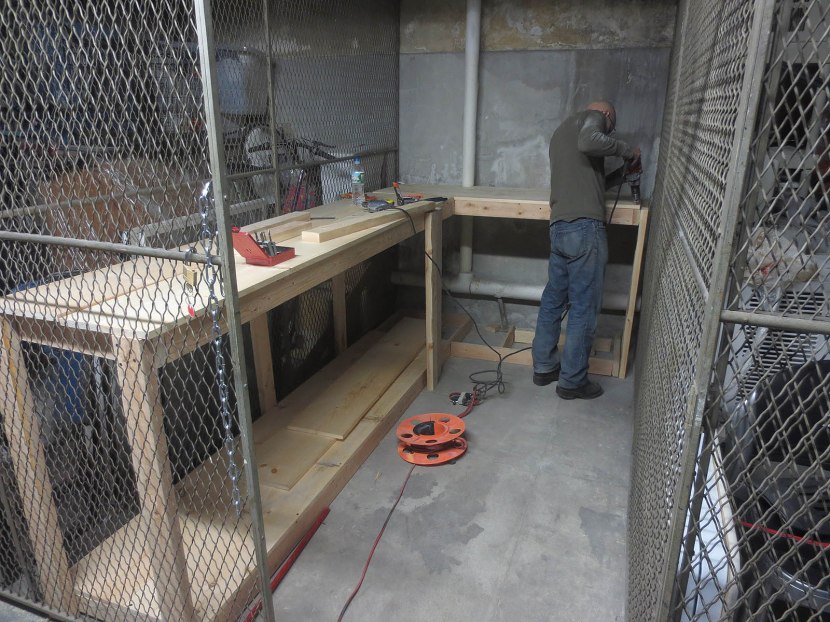 . . . and here he is sitting on it to prove its strength:

That didn’t actually prove anything. He only weighs about 150 pounds — slightly more than each barrel.

In the photo above, did you notice the barrels tucked underneath the counter? Here are the rest put in place (including a little stack of empty ones):

That’s right — ALL the barrels that used to completely fill up the locker are pictured above. And look how much space is remaining! There are still three barrels upstairs in my old bedroom (plus another 720 balls in the drawers), but now I could fit all of them in the basement, if I had to.

In case you can’t tell, the long part of the L-shaped counter can hold five barrels, and the short part against the back wall can hold two more . . . on each level. That’s 14 total barrels’ worth of space, plus I now have room on the floor. For the first time in years, there’s legitimate space for my collection to grow, and let me tell you, it’s a great feeling. Here I am with David at the end of our 12-hour day: 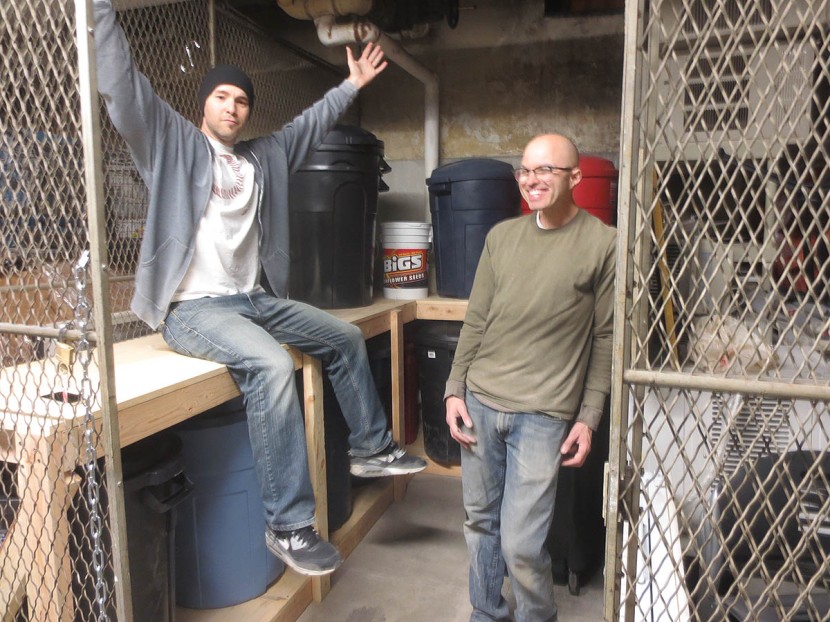 Finally, for dramatic purposes, here are the “before” and “after” photos side by side. Behold the difference!

In the “before” photo, do you see all those boxes on the left? Those are mostly filled with baseball cards, which are now tucked away at the back of several closets upstairs.

I realize this isn’t the most exciting blog entry, and in fact it might be downright boring for some people. For me, though, maximizing the space in the basement will make a huge difference in my life, and I wanted to document the change.