Do you remember when a guy named Brandon photographed me on 7/31/14 at Camden Yards? Well, he joined me for this game in Philadelphia, and I convinced him to film me instead. Here’s the video that he put together — check it out and then I’ll share a few photos and explain everything in detail:

Wow . . . right? Anyway, when I approached the Ashburn Alley gate, I saw two familiar faces — Grant Edrington (who’s going to college in Pennsylvania) and Rick Gold (who made the trip with me from New York and had held a spot at the front of the line while I bought a ticket). They’re both ballhawks, and you can briefly see them in the video. At the 0:24 mark, Grant is on the right side, wearing a yellow shirt, and bending down to pick up a home run ball. You can also see him from 0:25 to 0:31 as we both chase another longball that ends up ricocheting far away. Rick, meanwhile, wearing a gray shirt, dashes into view from the left side at 0:45 and proceeds to cut across the seats until 0:48.

My first ball of the day was so uneventful that Brandon didn’t bother including it in the video. I was standing near the front row in left-center field when a Phillies player tossed a ball to a kid. The kid dropped it in the flowerbed at the very front of the section, so I picked it up and handed it to him.

At the 0:59 mark, you can hear me say, “Wanna play catch?” to Antonio Bastardo, and to my surprise, he briefly took me up on it. At the end, he told me to “keep it.” That was my second ball, and it was all I got until the entire stadium opened at 5:35pm. Why? Because left field was dead. Except for the first few minutes when Marlon Byrd was cranking balls out, most of the batters were left-handed and/or just plain bad.

In case you’re unfamiliar with the glove trick, that’s what I was attempting to do (and also discussing) from 1:57 to 2:23.

At 2:36, you can see me snagging my third ball. At the time, I didn’t know who tossed it, but later figured out that it was Brandon Maurer. I got another toss-up soon after from Logan Morrison, and then, after complaining about how bad my luck had been, I started to get really lucky.

At 3:05, I said, “Oh, here we go,” upon seeing the batter hit a deep fly ball in my direction. Then I paused for a moment to gauge the distance and eventually wiggled down the stairs for the catch. That was my fifth ball, and I have no idea who hit it.

I don’t know who hit the next one either, but it was my favorite catch of the day. (See 3:48 to 3:55.) That’s because I had to run to the left and climb back over two rows of seats to get into position. Every so often, I’ll climb over one row to make a catch, but maneuvering over two is pretty tough. Unfortunately it got me in trouble with a security supervisor who marched down the steps, told me I wasn’t allowed to run for baseballs, and basically threatened to eject me if I did it again. (“This is your only warning,” he said.) More on that in a bit, but first, here’s what my view looked like from that section:

My seventh ball — a deep line-drive homer by Robinson Cano — was extremely lucky. I made the catch at 4:14, but to get the whole story, you need to watch everything from 3:59 to 4:35. This was the one where I ran into the next section to chase a ball, and while I was there, Cano hit me another in the 2nd-to-last row.

At 4:38, there’s a quick clip of me snagging my eighth ball. Once again, at the time, I didn’t know who tossed it, but later figured out that it was 3rd base coach Rich Donnelly.

From 4:44 to 4:51, you can see me drifting to the right to catch my ninth ball, and from 5:12 to 5:20, you can see me climbing down over two rows to catch number ten. I don’t know who hit either of those home runs, but I can tell you this: the supervisor was pissed about the last one. He hurried back down the stairs and said, “What did I tell you before?!”

I truly thought I was about to be ejected, so I apologized hardcore and told him that I’d been trying to obey his rule about not running for balls and that I hadn’t run for the last one, but had instead carefully stepped down over some seats. It soon became clear that he wasn’t going to eject me, but that he *was* going to lecture me about being a menace to society. Batting practice was basically done, so I didn’t mind when he led me up to the concourse. The main thing he told me was that I have to be careful around other fans. He was concerned that I might plow into someone and cause an injury.

“I totally understand where you’re coming from,” I said, “and of course you have no way of knowing who I am or what I’m all about, but for what it’s worth, I’ve attended more than 1,200 games in 51 major league stadiums, and I’ve never knocked anyone down while running for a ball. NEVER. Not even once.”

“Yeah, but with my luck,” he replied, “the first time you do it will be here today in Philadelphia.”

While I was getting scolded, several fans came over and defended me.

“Leave him alone!” one woman shouted. “He didn’t do anything wrong! He was giving away baseballs to people!”

“I understand that, ma’am,” said the supervisor, “but that’s not the issue.”

Moments later, a man interrupted the supervisor to shake my hand and say, “Thank you so much for giving a ball to my son. This is his first game.”

It must’ve been tough for the supervisor to stay mad, and all things considered, he turned out to be quite friendly and reasonable. I appreciated that he was willing to have a discussion, and I actually made him laugh later when he saw me changing back into my Phillies gear.

After the supervisor took off, several ushers approached me and apologized. One of them said, “Don’t judge us all based on the actions of one individual.” A different usher told me that they had no problem with my running around. “Everyone was running for balls,” he said. “They’re just not as good at it, but we thought you were very respectful.”

At that point, there were several balls in the Phillies’ bullpen — home runs that had landed there during BP — and the ushers were nice enough to let me hang around and try to get one. That’s what I was doing in the video starting at 5:29. It would’ve been easy to snag two or three with my glove trick, but given my recent run-in with the supervisor, I decided to play it safe and wait for a toss-up. Eventually it happened at the 5:38 mark, courtesy of Phillies bullpen catcher Jesus Tiamo. That was my 11th ball of the day.

Brandon didn’t sit with me during the game, so there’s no video evidence of what happened next. First let me show you my view during the top of the 1st inning:

In the bottom of the 1st, I moved half a dozen rows closer and it quickly paid off. With two outs, Ryan Howard hit a foul squibber that trickled into the Mariners’ dugout. Chris Woodward, the team’s infield coach, retrieved the ball, climbed to the top step, scanned the crowd for a worthy recipient, and ended up tossing it to me.

Here’s what my ballhawking notes looked like after that: 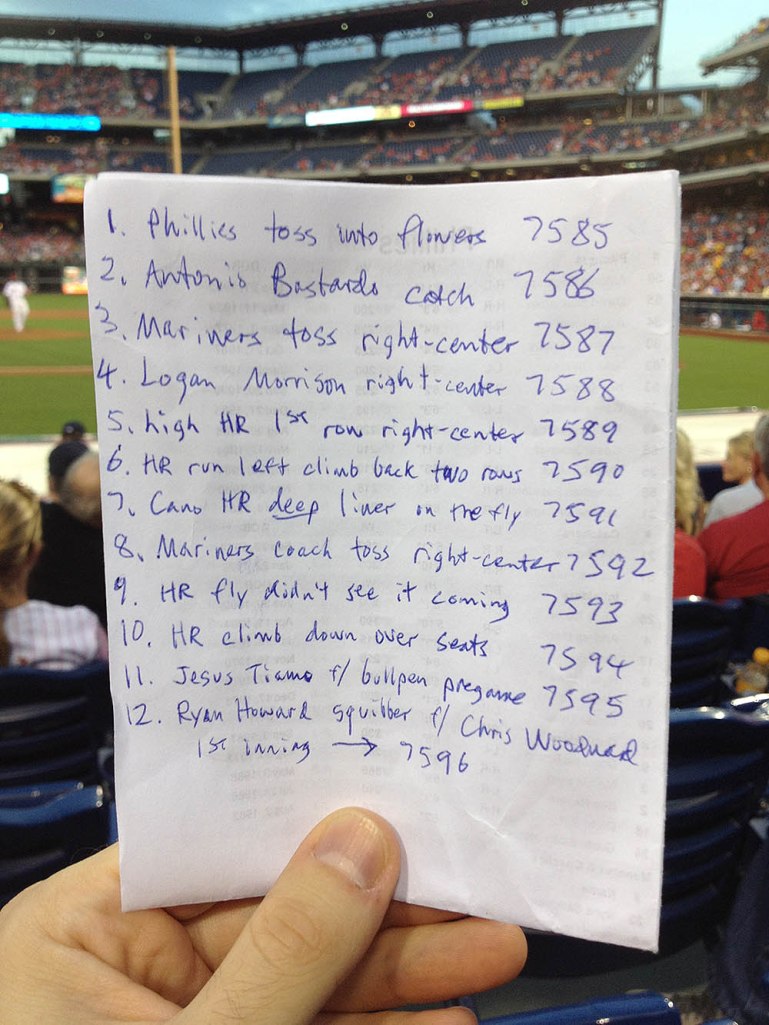 For the record, I can write *much* neater than that, but whatever, these were just meant to be my private scribbles.

Some time around the 5th inning, I received the following photo in a text from Brandon:

I wondered if he was still in the upper deck, so I looked up there, and sure enough, I spotted him: 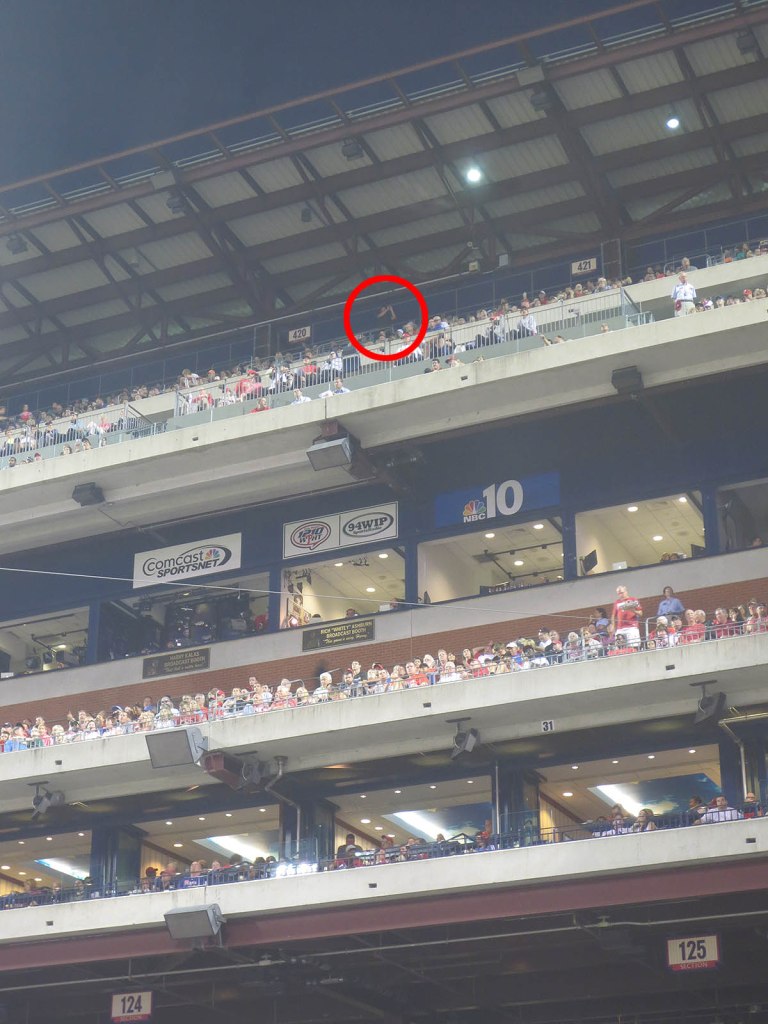 I managed to make one more snag before the night was through: a 2nd/3rd-out ball tossed by Robinson Cano after the 7th inning, which is to say that it was the product of a double play. Andres Blanco had grounded into it off Tom Wilhelmsen.

After the final out of the Phillies’ 4-1 victory, Brandon caught up with me for a quick video recap. He then took off with some friends, leaving me and Rick to drive back to New York and talk about our favorite hobby for two solid hours.

• 1,026 consecutive games with at least one ball

• 20 donors for my fundraiser