Fourteen months ago, I blogged about the damage that Hurricane Sandy did to my family’s book store — the Argosy. Remember when these bricks fell off the adjacent building and crashed through our roof and caused lots of flooding which damaged rare merchandise? Well, it just occurred to me that I never posted an update, so here you go.

Let’s start with a four-part photo of some damaged books:

You know what? “Damaged” isn’t the right word; “ruined” is more like it. I photographed all this stuff for insurance purposes. Thankfully the other building’s insurance company paid for everything, but we still had to do an insane amount of work, including dealing with all the framed items that had gotten soaked. See all the empty frames below?

Some of them were able to be salvaged, but the mattes were trashed: 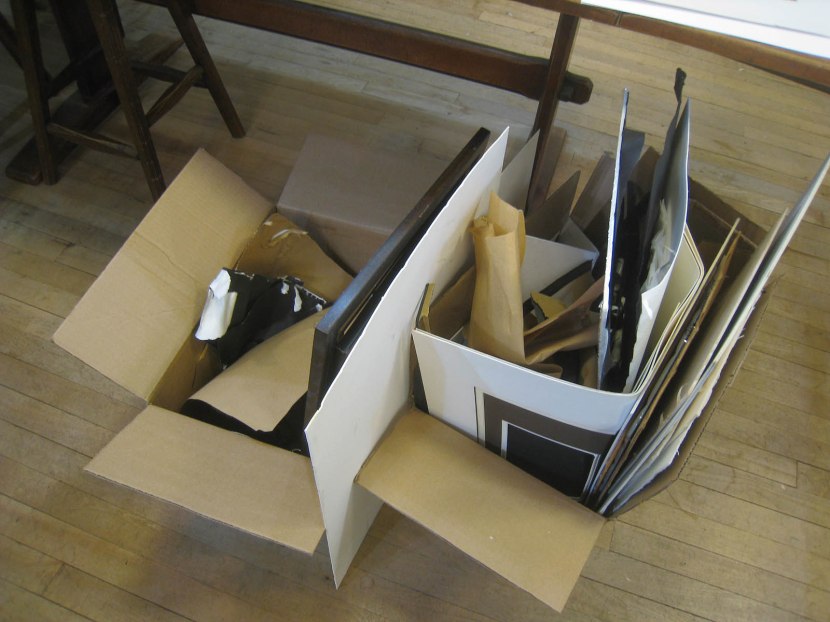 Those last two pics were taken in the 2nd-floor gallery. That’s where we have all the antique maps and prints, along with our framing department. There was no damage there; it’s just where we brought the damaged frames to be dismantled.

Meanwhile, this was the scene in the First Editions department on the 5th floor:

In the photo above, that’s my cousin Ben (who has worked full-time at the Argosy since 1999). He was inspecting every book and placing the damaged ones on the floor.

FYI, the Argosy has six floors, and the flooding went all the way down to the 4th-floor office, speaking of which . . . look what was in the freezer in the lunch room: 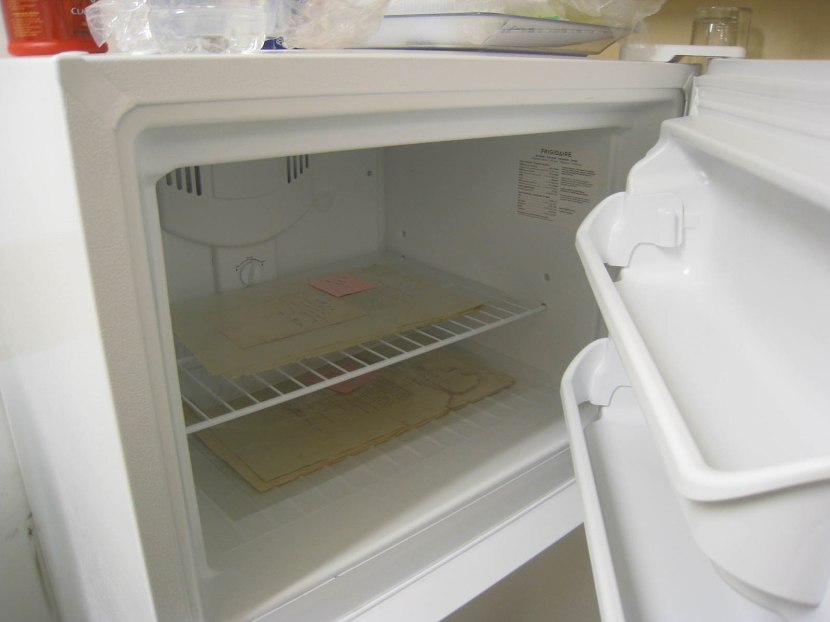 Remember these Thomas Jefferson documents? Yeah, we stuck them in there to halt the spread of the water damage, literally by freezing it. More on that in a bit, but first, look what happened the following day:

Let me explain: our roof had just been patched up, and then it rained like hell, and the ceiling in the Autograph department on the 6th floor started leaking again.

This time we scrambled to move *all* the merchandise away from that portion of the room, and by the end of the day, the Autograph department looked like this:

Of course, we kept discovering more ruined items, some of which we hadn’t noticed after the first round of flooding. Here’s a book with a fresh coating of mold . . .

. . . and here’s another that “bled” all over the inside of the dust wrapper: 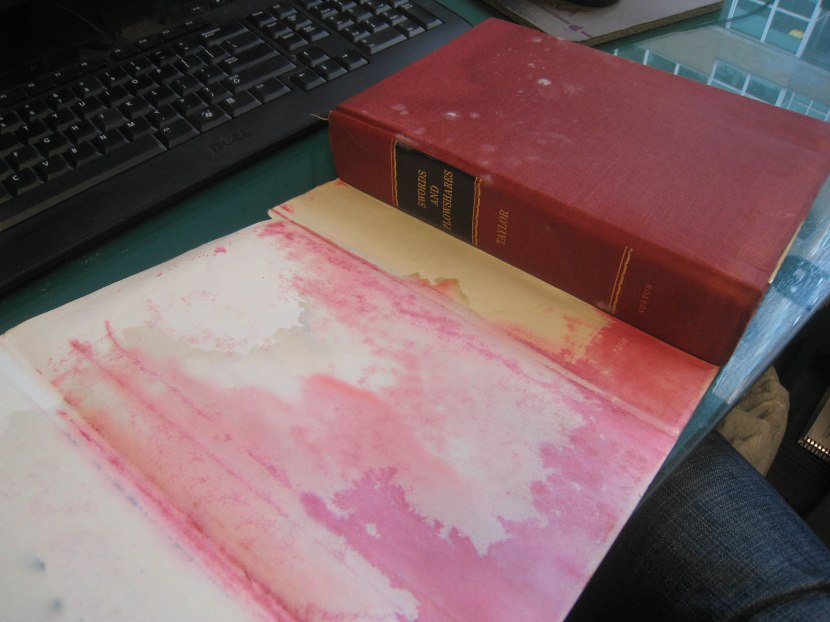 Here’s a book that was signed by someone you’ve probably heard of: 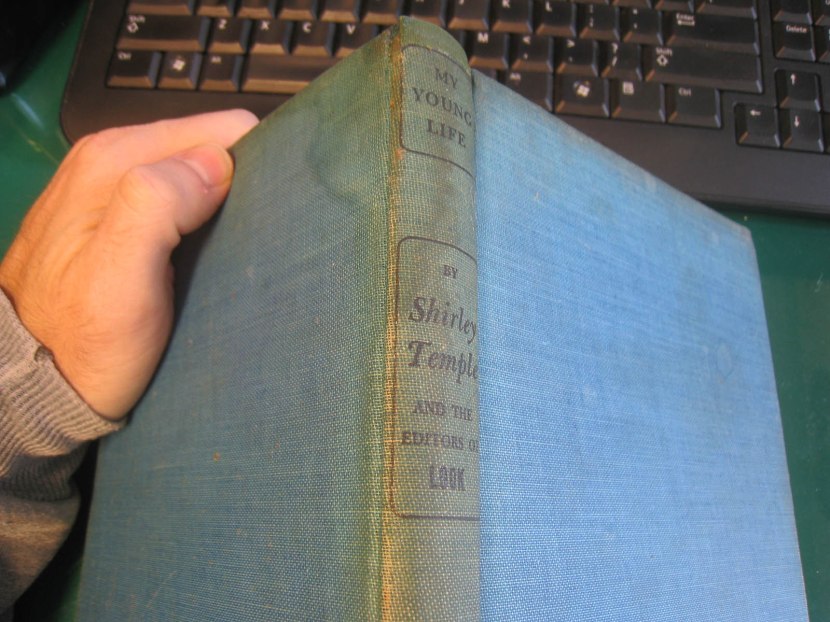 Although Shirley Temple’s signature survived the storm, the outside of the book suffered some water damage.

Here’s something else that got messed up:

That’s a game-worn pair of uniform pants, autographed by Doc Gooden and stained on the crotch. By the way, I still have these pants, and I’m thinking about giving them away as a charity prize this year. What do you think? Even with the stain, it’s still a really cool item, right?

Anyway, several days later, an insurance inspector came to look at all the damage. Here he is on the roof with Ben and my mom (who has worked full-time at the Argosy since 1958):

Here he is with Ben on the 5th floor:

As you can see, we had draped plastic sheets over the shelves because there was STILL water trickling down.

Twenty-four hours later, this was happening on the 6th floor:

1) Most of the green felt wallpaper had been removed.
2) Workmen were dismantling bookshelves and other stuff.
3) The ceiling was STILL leaking, and buckets were set up to catch the water.

Three days later, a different set of workmen ripped a chunk out of our soggy ceiling: 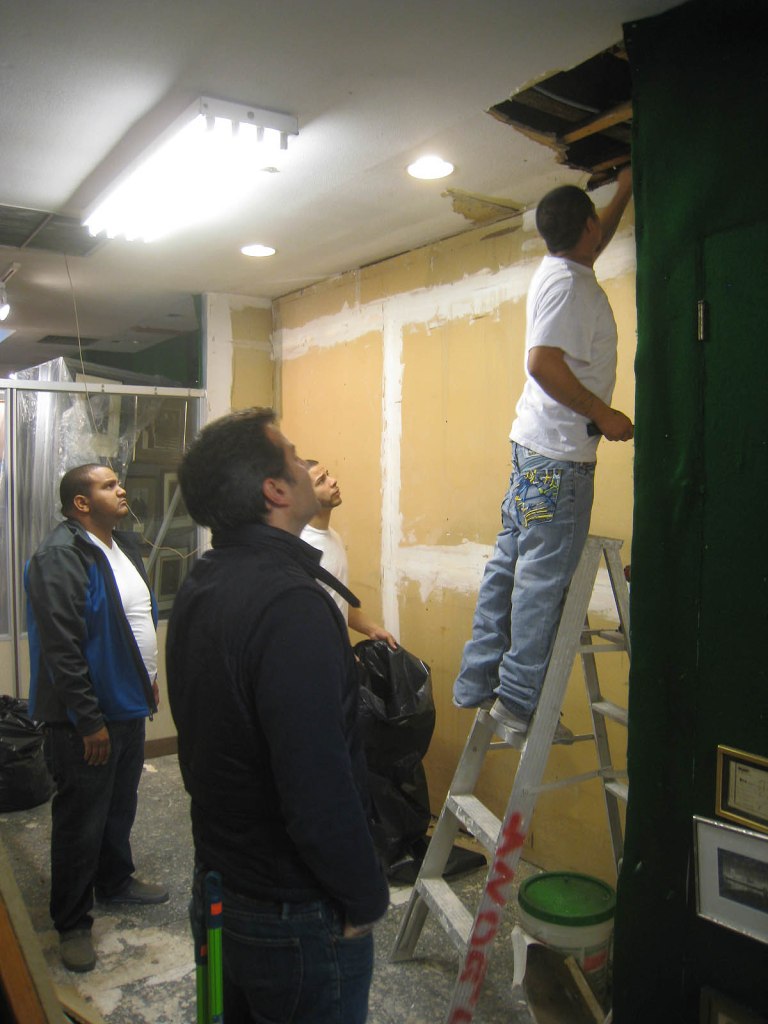 In the photo above, did you notice the plastic sheets in the background, behind the glass partition? Here’s a better view of the back of the Autograph department: 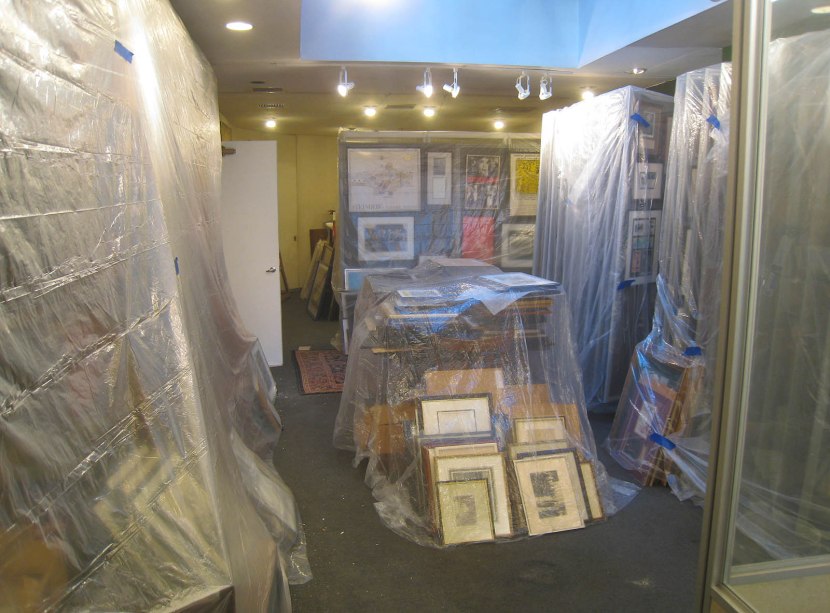 Here’s some of the stuff that had to be demolished — mostly old book shelves and large pieces of drywall:

Did you notice the remaining portion of the carpet?

It was still soaked.

Here’s another photo of the Autograph department:

All that plastic was there to protect everything when the ceiling got patched up and painted. See the ladder up above? That’s pretty much where I normally sit and work. 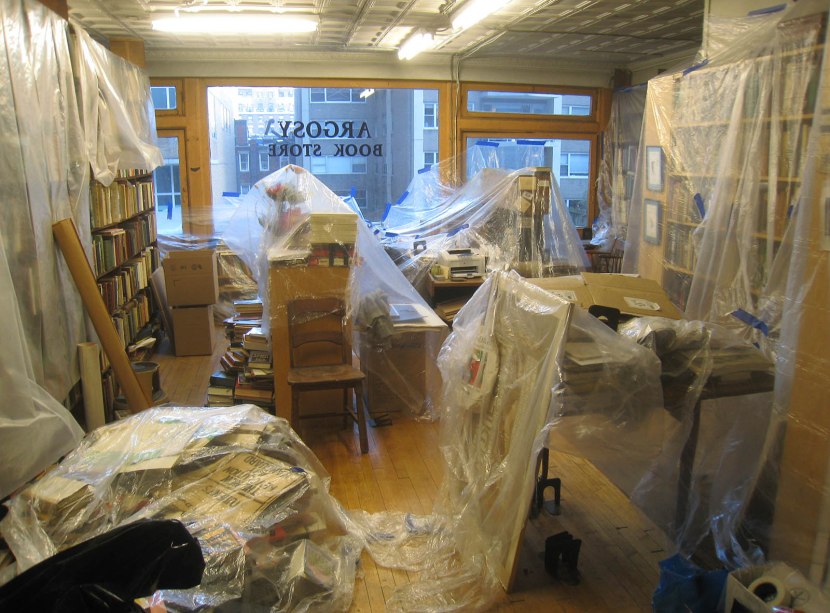 . . . which prompted a film crew from CBS News to do a segment on the damage. Here’s my aunt Judy being interviewed:

Here’s my mom showing the Thomas Jefferson documents to the camera . . .

. . . and here’s my other aunt Adina being interviewed outside in the “arcade”:

By the way, those Jefferson documents — Acts of Congress that he had signed as Secretary of State — were eventually sent to a professional restorer.

After some demolition on the 5th floor (which lasted several days) . . .

. . . Ben and another employee named Neil boxed up *all* the books in the First Editions department:

All those books had been shelved alphabetically by author, so they tried to keep everything in order.

Here’s where the boxes ended up:

They sat there for several weeks, during which the room was completely renovated. The following photo shows the new floor, along with several shelving units: 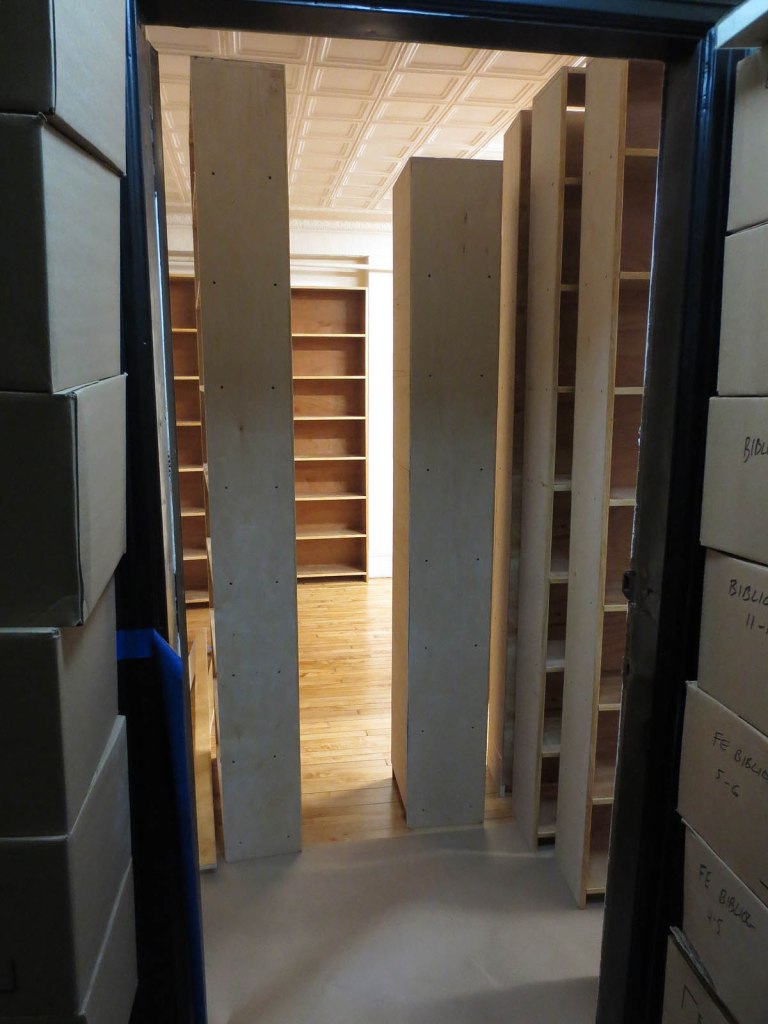 When the shelves were installed, guess who single-handedly re-shelved ALL the books.

Here’s a photo that I took during the weeklong process:

The biggest challenge was leaving a uniform amount of space at the end of each shelf. Obviously, because of all the books we’d lost, it would’ve been dumb to shelve the remaining volumes as tightly as possible. If I did that, we would’ve been left with a whole wall of empty space, so I tried to plan it out. No, I didn’t get it right the first time. Yes, I had to reshuffle lots of books to make it fit just right.

. . . and so was the entire Autograph department on the 6th floor: 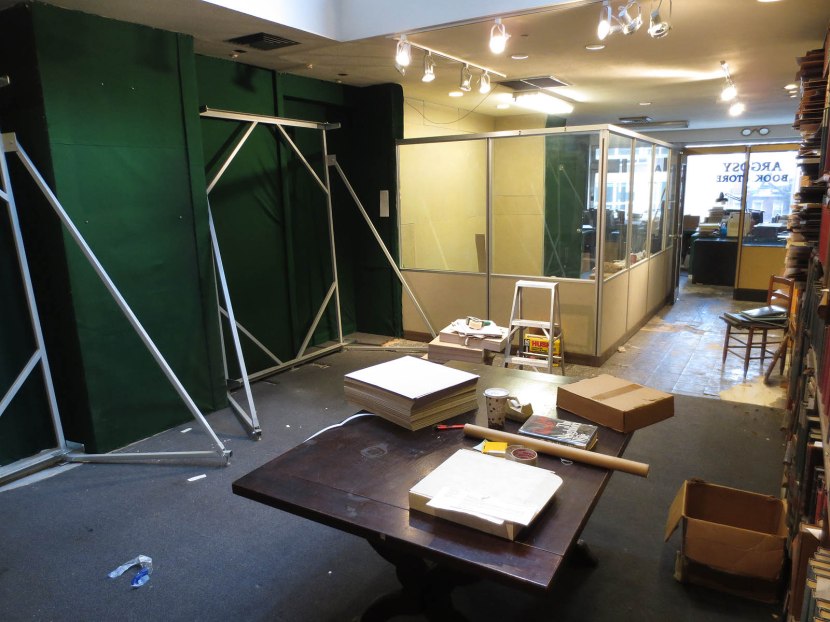 We crammed most of the stuff into storage rooms, which were already cluttered to begin with. Look at this mess: 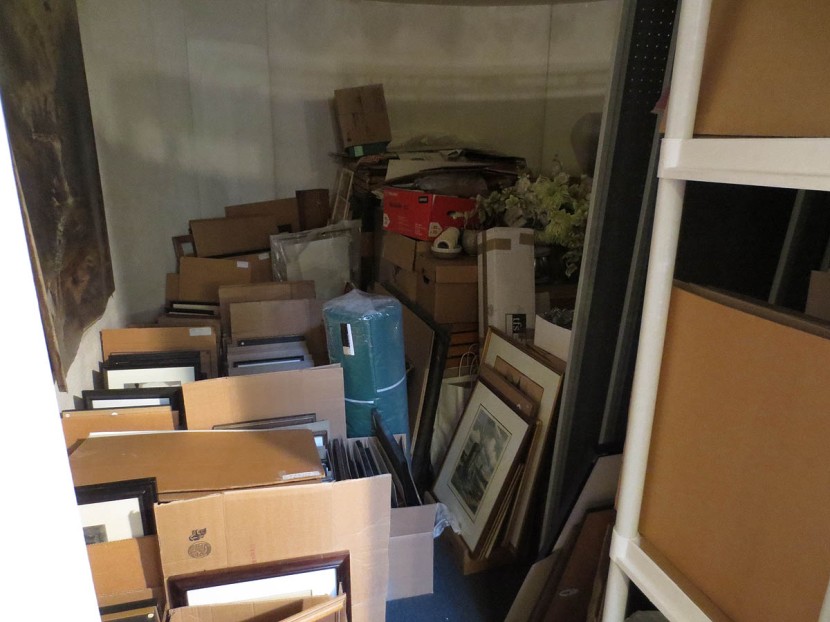 Yeah, it was sealed off for asbestos removal!! That’s why we had to empty it out — and that’s why we had to do the same thing on the 6th floor. You see, when the carpeting upstairs was removed, it exposed a layer of old, crappy tiles which began to curl up at the edges and reveal a small trace of asbestos — not enough to be harmful, but enough that we were legally obligated to eliminate it.

Meanwhile, the 6th floor had been stripped bare: 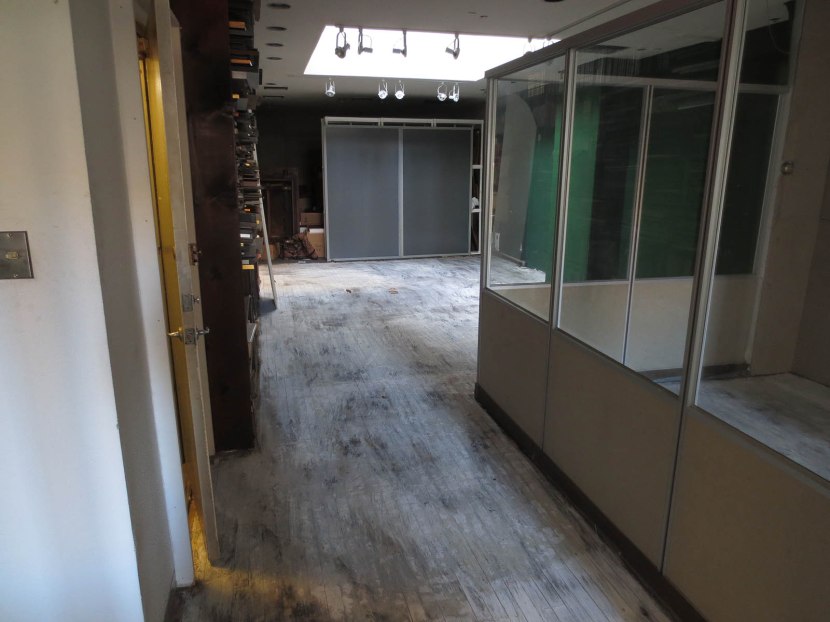 Here’s another photo of it: 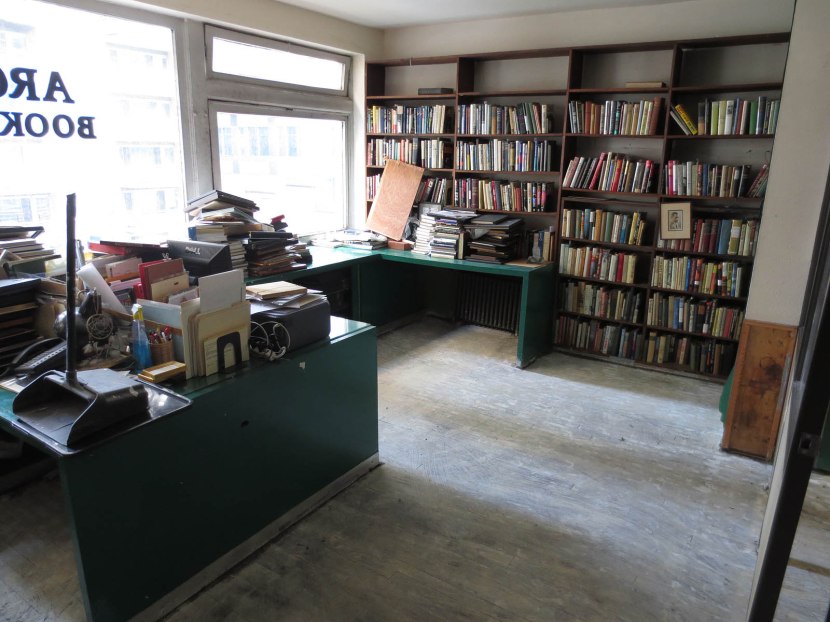 So sad. But hey, at least we didn’t have to pay for any of this, and I knew that everything would end up looking much better . . . eventually. 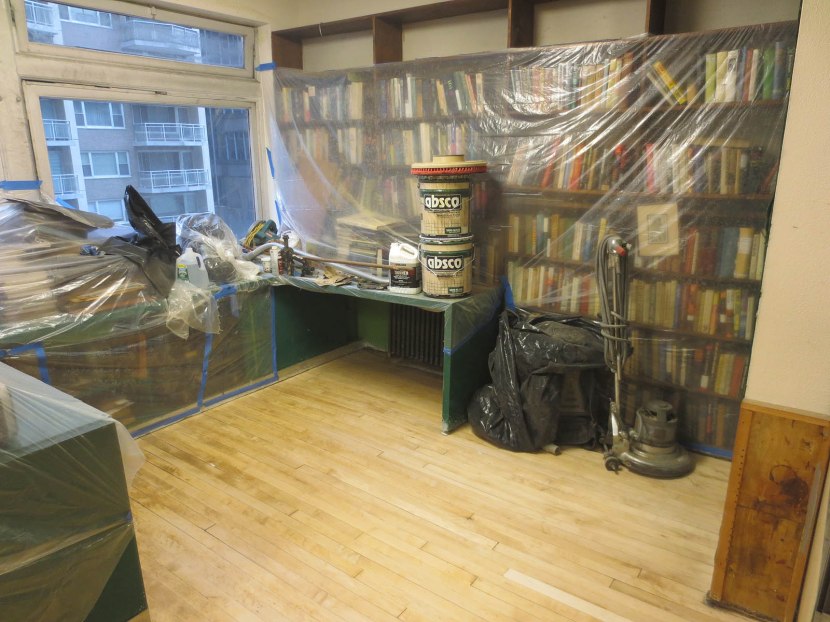 Of course it was nearly impossible to breathe up there. The paint fumes were overwhelming, and there was sawdust covering everything.

Once the asbestos had been removed from the office, the 4th-floor renovation got underway:

Because the new floor in the Autograph department had to be varnished and then left to dry, we weren’t able to start putting things back in place until February 14, 2013. Here’s a photo of my mom watching two of our longtime employees, Byron and Juan, reassemble a pair of large metal racks:

While all of this was happening, would you believe that we were *still* discovering damaged items? Check out all the mold in this book . . . 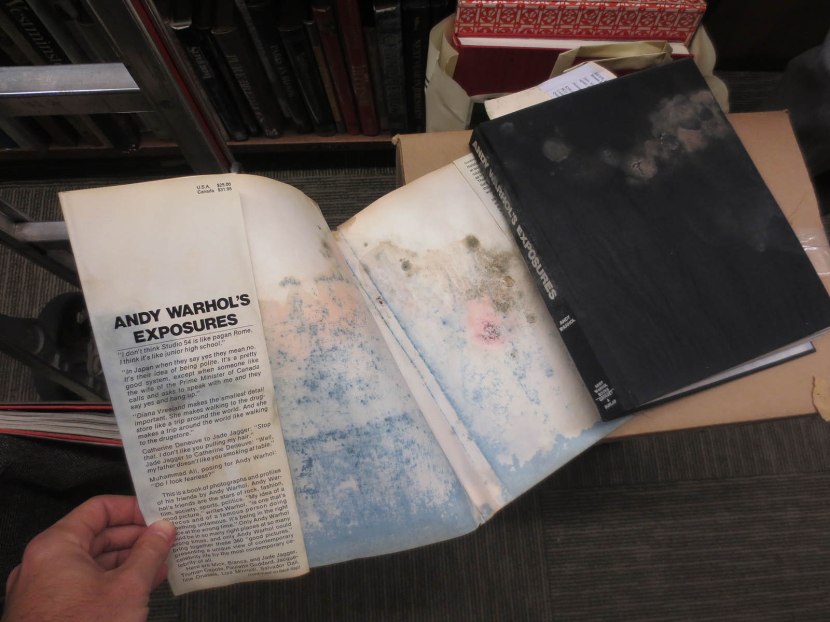 Here’s a random photo of some 6th-floor clutter, just because:

Check out this before-and-after comparison:

Nearly one month later, the construction in the Autograph department was still dragging on. Here are two workmen hauling in a new bookshelf on March 18, 2013: 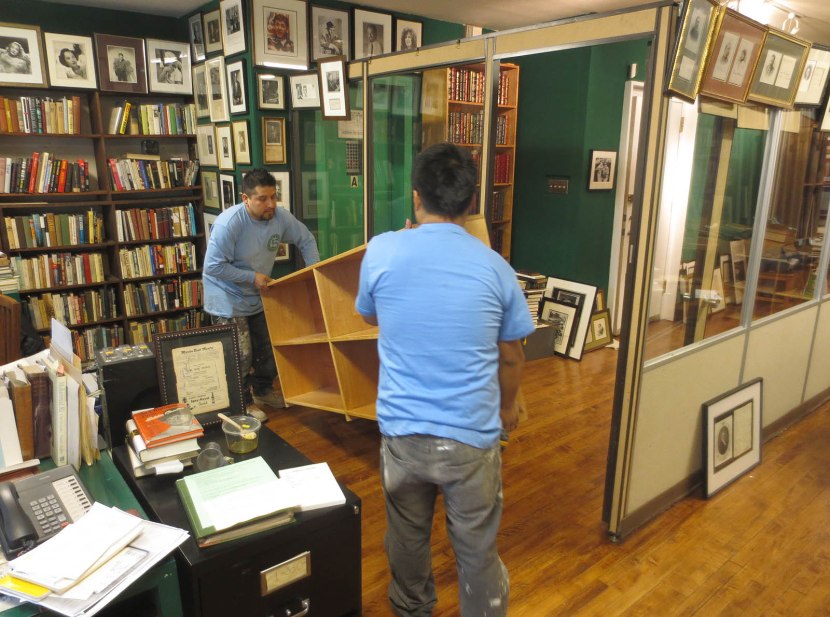 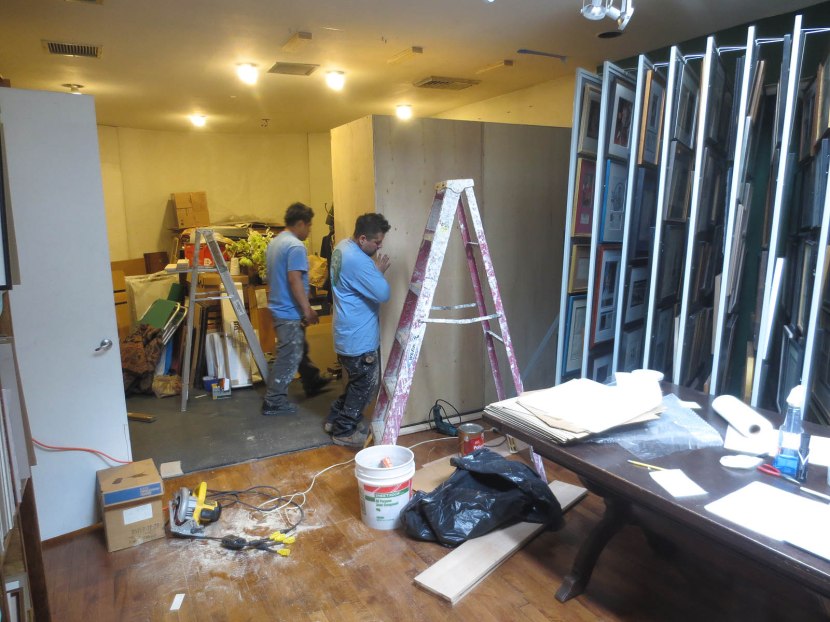 Can you imagine how long it took us to sort through all the clutter and merchandise and put it all back where it belonged? It took months, which is why I neglected to blog about it. By the time everything was fully operational, the 2013 baseball season was well underway, and my life was being pulled in a different direction.

Fast-forward to January 2014. Here’s what the First Editions department on the 5th floor now looks like: 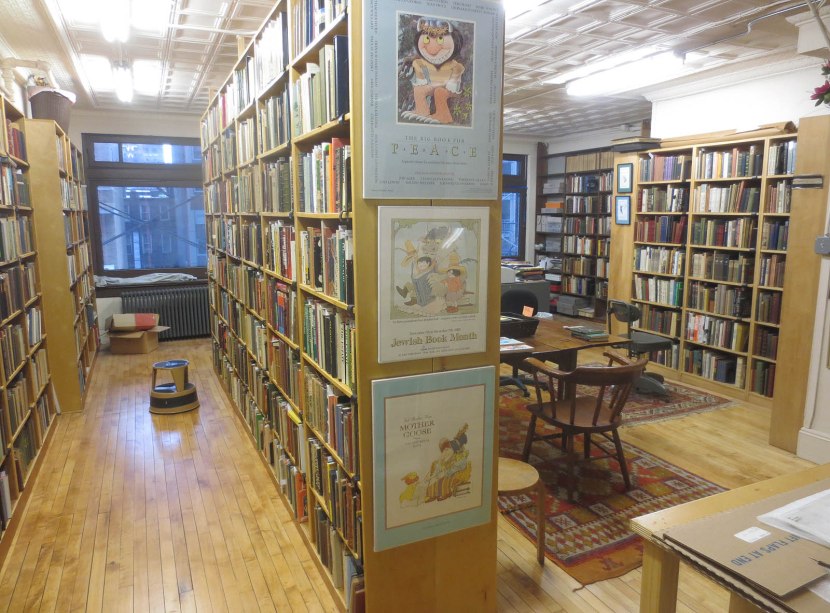 Here’s a current photo of the Autograph department on the 6th floor:

Here’s another photo of the back:

Finally, here’s a shot of the main floor (which never suffered any storm damage):

Come visit sometime. I promise you’ll like it, and I might even be there to say hi.