Do you remember how big of a deal it was when you turned 10? It was huge, right? Double digits at last! Well, this game for me at Three Rivers Stadium — the Pirates’ former home — sent my lifetime MLB stadium tally into double digits. It was also the first time I’d gotten on a plane by myself for the sole purpose of attending a game. This made me feel like a true (and very grown-up) baseball fan.

Thankfully, when I landed in Pittsburgh, the weather was perfect, and I had plenty of time to spare. I wrote in my journal for a while, grabbed some lunch, found my hotel, and eventually headed back out at around 3pm. I was too young to rent a car and didn’t want to mess around with public transportation, so I took a cab.

This was my first glimpse of the stadium:

Okay, not really, but I was so excited to be there that it didn’t matter. When I got out of the cab, I did what I always do: I wandered and took photos. Here’s one that shows a sneak peek through the gates . . . 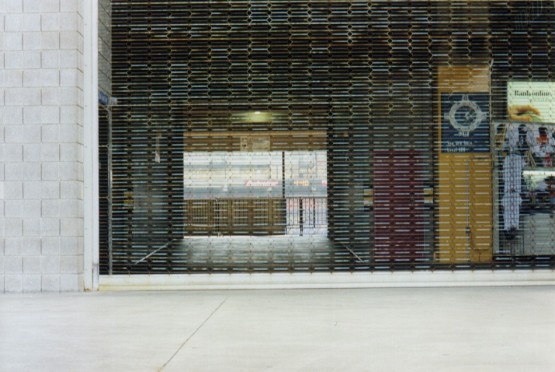 . . . and here’s another of the Honus Wagner statue nearby: 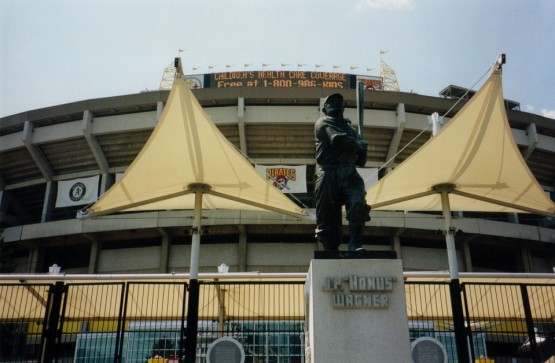 I bought a ticket and kept wandering . . . and then? I probably shouldn’t admit this, but my goal was to sneak into the stadium extra early — something that was often doable before 9/11. In fact, over the previous few seasons, I’d done it several times at Shea Stadium, always with a game ticket in hand. I had never cheated the Mets by sneaking in for free, thought it would’ve been easy. For some reason, roughly three to four hours before game time, one of the garage-type doors was usually kept wide-open at Gate E. No guards. No cameras. It was too tempting not to take advantage, so one day I did. I just waltzed right in and headed up the ramp and ended up lurking in the Loge Level seats near the foul pole. Not only didn’t I get caught, but I got an extra ball out of it. The Mets were taking early BP, and the rest of the stadium was empty. So I did it again. And again. And now that I was here in Pittsburgh, I hoped to do something similar.

After walking around for a while and cautiously testing various gates and doorknobs, I found myself outside an open doorway — an employee entrance of some sort that led into a long hallway. There wasn’t much activity — just a few workmen passing by who didn’t acknowledge me — so I waited for a lull and then skulked in.

The first thing I noticed was an office on the left with glass windows and two workmen inside. Thankfully, though, the shades were drawn, so I could only barely see their outlines, and they didn’t notice me. Of course, as I walked a bit farther, I happened to look right up into a security camera. I probably should’ve made a U-turn at that point and gotten the hell out of there, but no, like a total schmuck, I kept going.

I ended up passing a groundskeepers’ room (!!) and the umpires’ room (!!!!), and eventually, when I approached the end of the hallway, I saw a VERY bright green sliver of light up ahead. It was shining through a narrow space at the bottom of the wall, and I knew that it could only be one thing: sunlight reflecting off the AstroTurf! I was too excited for words — too thrilled to have the sense to pull out my camera and take a picture. It was about 4pm when I turned left and realized exactly where I was: behind the outfield wall in right-center field. Wow!!! See the scoreboard in this random photo of the stadium? I was standing right below it. I found a place to get a peek over the outfield wall, and whaddaya know? The Pirates were taking early BP.

I continued walking through the gap behind the wall toward the right-field foul pole. Soon after I got there, one of the batters hit a home run that landed near me. (How convenient.) I looked around, and everything appeared calm and safe, so I walked over and picked it up and stuffed it into my backpack.

Take another look at the random photo of the stadium. See the bullpen in the right field corner? There’s where I ended up. Here’s my own photo of it: 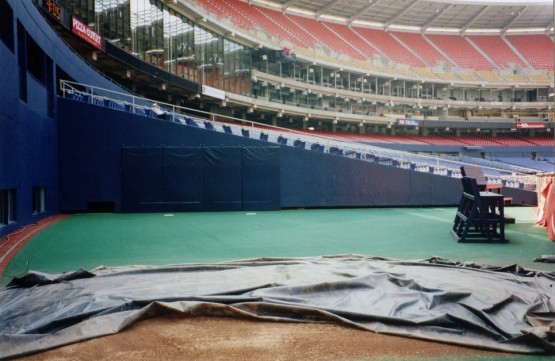 I didn’t walk any farther than that. There were players on the field and several ushers in the seats. I was nervous about getting busted, so I stayed against the side wall, where I could barely see over the top strip of foam padding. Here’s another photo: 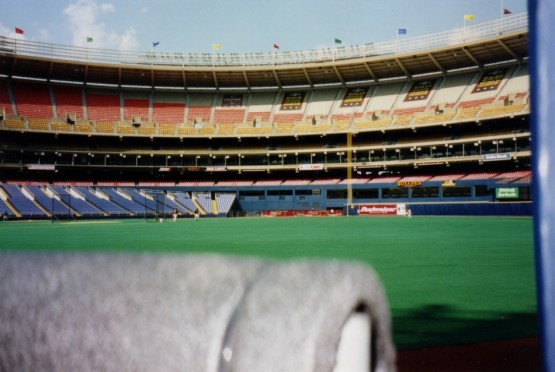 And hey, why not another! Look how close I was to the coaches and players:

While I was standing there, a batter sliced a ball that landed in the bullpen and rolled five feet away from me. I grabbed that one too and couldn’t believe how awesome my life was.

Then it all came crashing down.

One of the Pirates coaches — a really mean-lookin’ mofo — approached me and asked who I was. (I found out later that it was Pete Vuckovich, a former pitcher who had played the role of the evil Yankees slugger Clu Haywood in the movie “Major League.” Yikes.) He asked if I was with the grounds crew, and when I said no, he was like, “Why are you back here?” I thought fast and said I’d entered the stadium to use a bathroom and had gotten lost. Just as he was really starting to get agitated, I saw two security guards in the background heading our way, so when he told me that I had to leave, I was almost relieved. That’s when I made my U-turn and quickly retraced my steps. I didn’t run — that would’ve been an admission of guilt and perhaps prompted the guards to chase me — but I walked FAST. I headed through the gap behind the outfield wall, and when I reached the scoreboard, I turned right and proceeded quickly through the long hallway and kept my head down as I passed the security camera, and man, let me tell you, when I made it out through the door, I ran faster than ever.

I was on edge for the rest of the day, but no one ever approached me or said a word.

Take one more look at the random stadium photo. (Last time, I promise.) See the red seats in straight-away right field? See how they’re about 20 feet high? Well, once the stadium opened (90 minutes before game time) for regular BP, I used my glove trick twice to snag home run balls that had landed there. I should’ve gotten a few more with the trick, but I was an idiot and had bad luck, and stadium security eventually told me to stop.

My fifth ball of the day (including the two I’d gotten before the stadium opened) was a random toss-up from 20 feet below. In other words, the player didn’t seem to be aiming for anyone in particular, so I grabbed it when it sailed over another fan’s head and landed on a seat.

After BP, the Pirates took infield/outfield practice, and when they finished, I got Steve Bieser to toss me a ball at their dugout on the 1st-base side. Then, as the grounds crew began prepping the field for the game, I got someone to take my picture:

In case you’re wondering, I was 20 years old, and I was wearing that shirt because of Tony Womack. He had graduated from Guilford College seven years earlier, and I’d gotten to know him because of his connection to the school. (More specifically, I was on the baseball team as a freshman, and he came and worked out with us in the fall.)

Anyway, when the Pirates jogged off the field after infield/outfield practice, Womack saw me and waved. As simple a gesture as that was, it made me feel great. He wasn’t just some scrubby bench player. He’d played in the All-Star Game the year before — the first of three consecutive seasons in which he led the National League in stolen bases.

. . . and made my way back to the dugout before the game. Who ended up coming out to play catch? That’s right — Mister Womack. And he ended up tossing me the ball. There wasn’t much security, so I stayed behind the dugout and took a photo of him at bat in the bottom of the 1st inning: 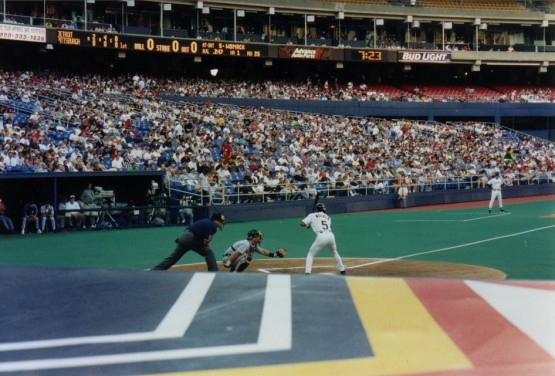 He lined out to left field. (Frowny face.)

Here’s the last photo that I took inside Three Rivers Stadium:

I didn’t snag any more baseballs during or after the game, which the Tigers won, 9-1. I finished the day with seven (and a lifetime total of 1,160) — a respectable total for a stadium with a stupid layout and a late opening time.

Before heading out, I collected more than a dozen ticket stubs. Here are four of them . . .

. . . and here are nine more that I got autographed weeks/months later:

How many of those signatures can you identify? Post your answers and guesses in a comment. In a few days, I’ll reply and tell you who’s who.

Finally, as I’ve been doing at the end of all these “Turn Back The Clock” blog entries, here’s my original handwritten journal entry about this game. It starts here on the first page of Volume 38 . . .

. . . and continues here with a whole lot of mundane details about my life:

But you know what? I love those details. I’m glad to know that I was dutifully studying four-letter Scrabble words beginning with the letter “o.”

Here’s the part when I arrived at the stadium and began trying to sneak inside: 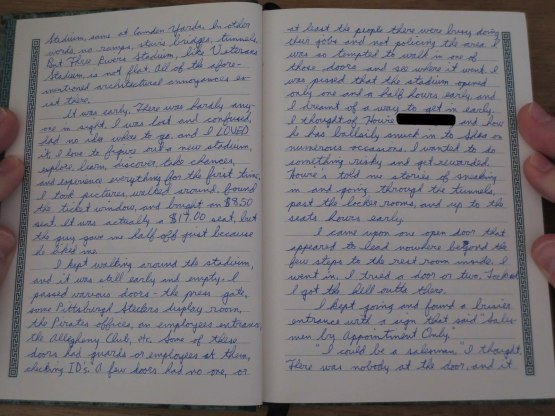 You can probably guess what the bleeped out words are:

This next two-page spread has a diagram — an aerial view — of the right field corner:

Yes, I was obsessed with documenting everything, and I took my journal seriously.

Here’s the part where Vuckovich approached me in the bullpen and asked who I was:

I remember all of that *so* vividly. I wonder what would’ve happened if I’d gotten caught by stadium security.

Here’s the part where I reentered the stadium at the normal time and snagged two baseballs with the glove trick:

You think there’s been a lot of stuff bleeped out? Ha! Check out THIS spread: 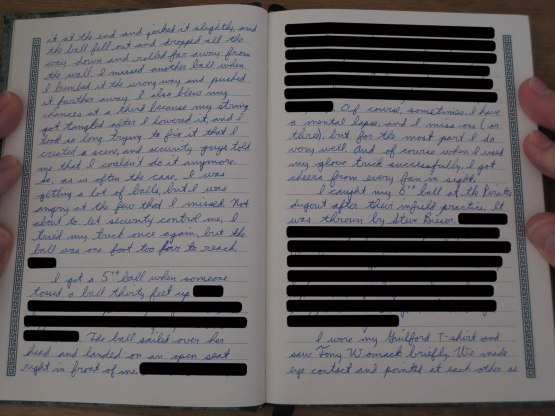 Here’s where the journal entry ends:

That’s it . . . kind of. Here’s a complete list of all my other “Turn Back The Clock” entries: