This was the final game of the regular season, and there was a huge crowd waiting to get in: 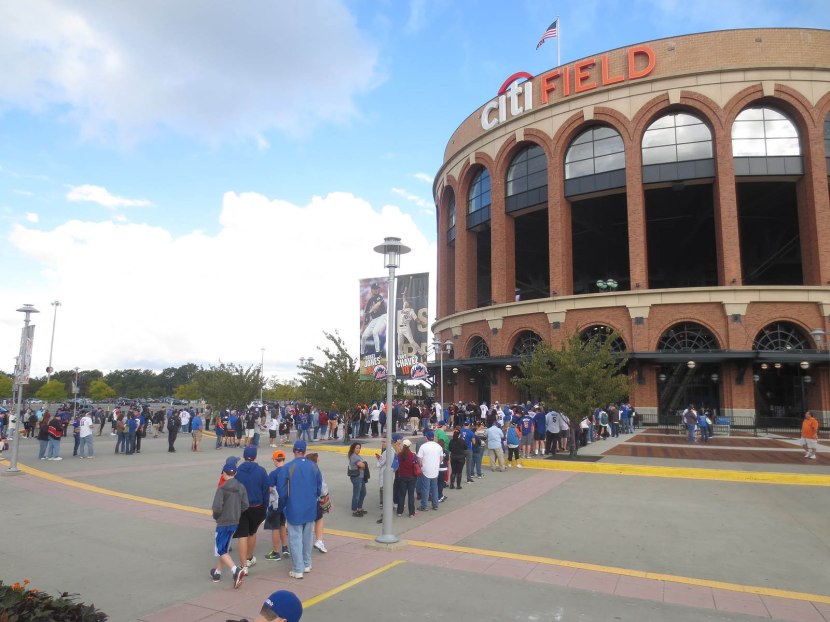 Why so many people?

Because there was going to be a pre-game ceremony to honor Mike Piazza, who was being inducted into the Mets Hall of Fame.

Not surprisingly, there was no batting practice . . . 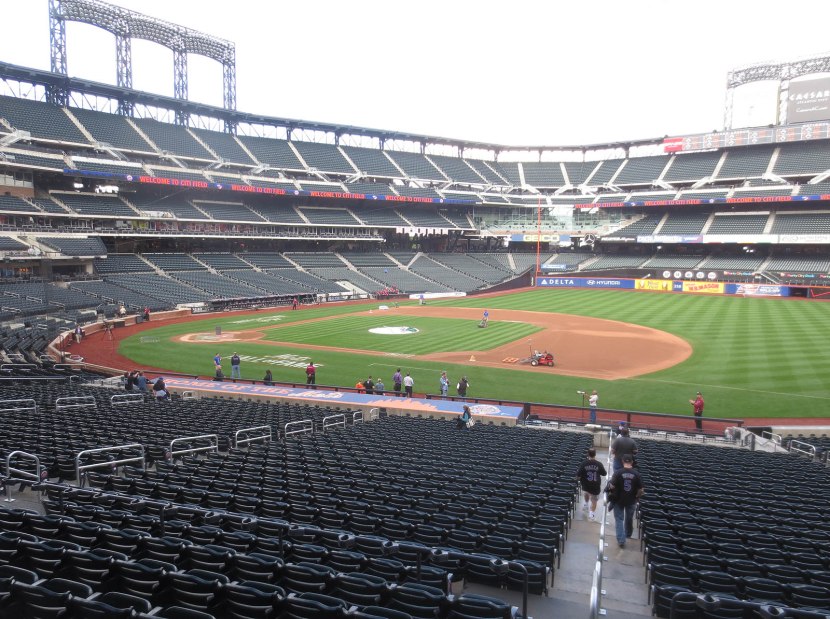 No, not to watch Brewers closer Jim Henderson warm-up. Did you notice the jumbotron in the previous photo? Here’s a closer look at it:

How big of a deal *was* this whole induction ceremony? Big enough for the Mets to have gotten permission from MLB to use commemorative balls during the game? I’d heard a rumor that special balls were going to be used, but given the Mariano Rivera commemorative ball fiasco that had taken place four days earlier at Yankee Stadium, I had my doubts.

But hang on a second. Let’s not forget about Jim Henderson. When he finished playing catch, he tossed me the ball. Here’s a screen shot (from a crappy video I filmed) that shows it sailing toward me: 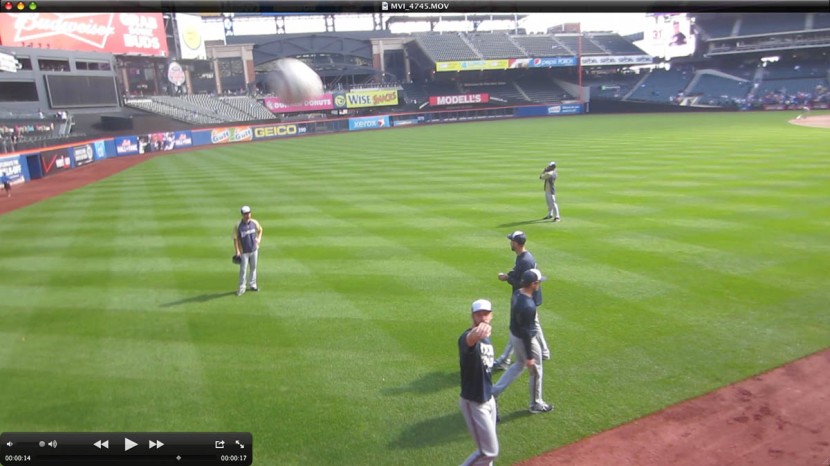 Look what I was wearing:

Is that the best Brewers outfit you’ve ever seen? Yes, of course it is, and all the credit goes to my friend Ben Weil. As I’ve mentioned many times, Ben owns thousands (yes, thousands) of jerseys and fitted caps. In a strange twist of fate, it just so happened that (a) I had “lost” my Brewers shirt three days earlier and (b) Ben is **OBSESSED** with Mike Piazza but couldn’t make it to this game. Therefore, he lent me his best Brewers jersey and cap in exchange for my getting him as much Piazza stuff as possible.

At that point in the day, I’d already secured one item: a black Mike Piazza t-shirt with the Hall of Fame logo. Every fan had received one on the way in, and I had no interest in keeping it for myself, so whatever.

Unfortunately, I only snagged one ball from the Brewers’ pitchers, but I did get two autographs on tickets that I’d found earlier in the series. Here’s Michael Blazek’s signature . . . 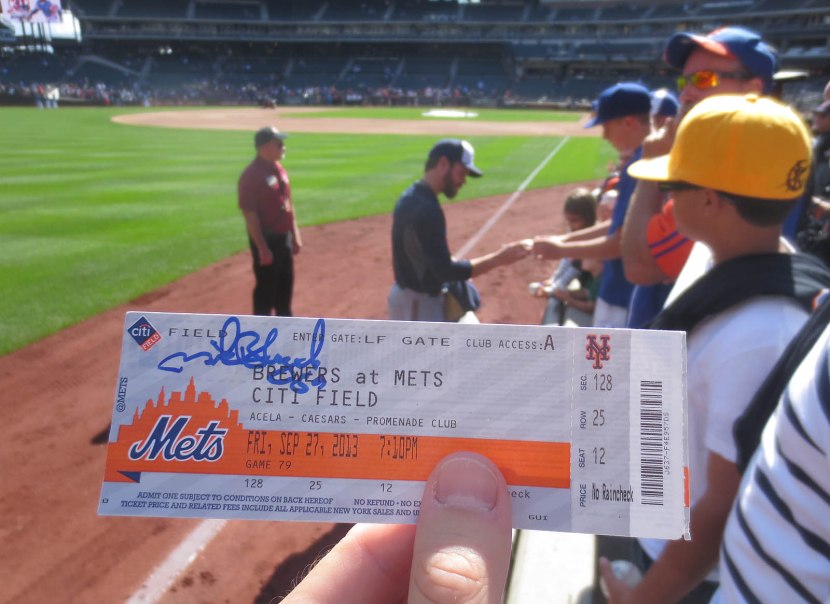 . . . which is so ugly that he should be sent down to the minors. I could take a dump on a ticket and make it look better than that. Seriously, shame on him.

Once the Brewers were gone, I quickly changed out of their gear and planned to hurry to the right field side. The Mets had started playing catch over there, and just as I was about to take off, I was approached by a young fan who’d brought his copy of How to Snag Major League Baseballs. Here we are:

I quickly signed it for him and apologized for running off, but he understood. I think he told me that his name is Josh, but I was so distracted at the time (and it’s now five days later as I sit here typing this) that I might be wrong.

As it turned out, going to right field was a complete waste of time. There were a zillion little kids, and the seats were as crowded as I’d ever seen them: 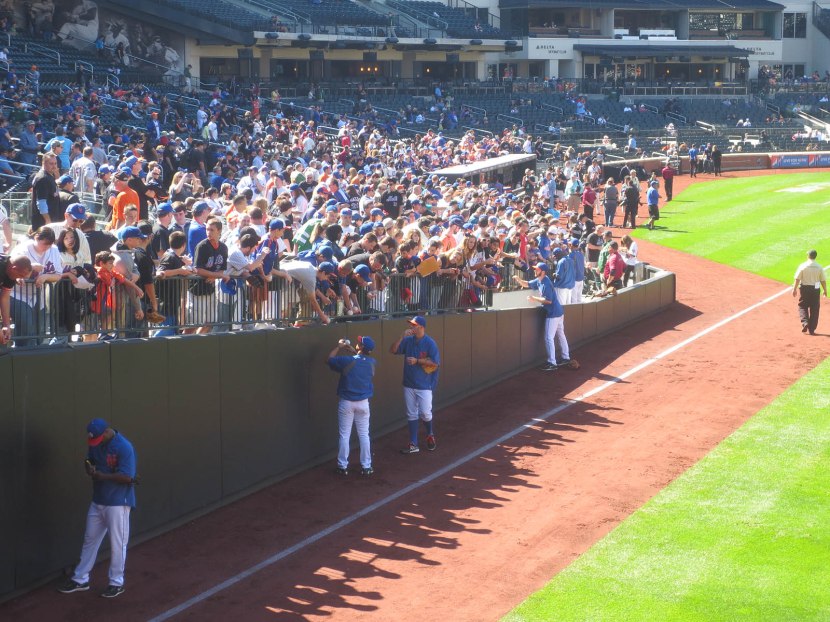 The only other time I’d seen *that* many people packed into the first few rows at Citi Field was at the 2013 All-Star Game.

It was cheap, but I figured it was better than nothing.

All of a sudden, I heard the crowd start to cheer, so I hurried to a spot where I could see the field. Was the ceremony starting?! Had I missed Piazza’s entrance?

Mets manager Terry Collins was taking a partial lap around the warning track and waving to the fans:

That was nice, but of course Collins and the rest of the Mets hadn’t behaved like that during the first 80 home games of the season. Now that it was “Fan Appreciation Day” (and an official team photographer was there to document everything), they were attempting to be friendly.

Anyway, I headed to my ticketed section for the start of the ceremony and got there just as some former Mets players began walking out onto the field:

Mike Piazza’s family and friends were already seated in front of the Mets’ dugout . . . 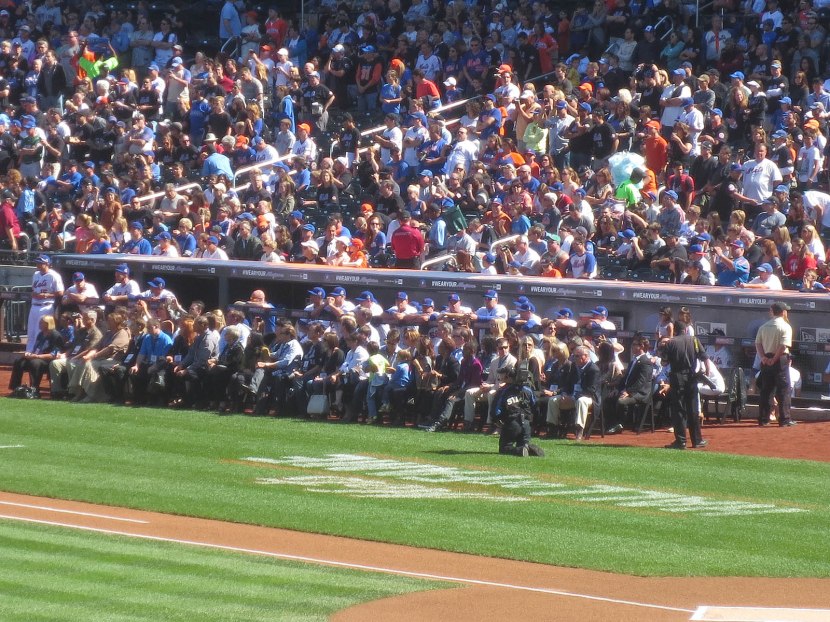 . . . and there were lots of media people behind home plate:

This really WAS a big deal.

Here’s a photo of the former players sitting down:

Mets radio announcer Howie Rose was at the podium, and as he introduced them one by one, they stood up and waved to the crowd:

The six players pictured above are:

Even though I’m not a Mets fan anymore, it was really cool to see all these guys, and it was even better when Piazza walked out:

The thing I enjoyed most about the ceremony was the crowd’s reaction. Everyone was SO into it. There was so much excitement and love that I couldn’t help but get swept up in it too. Mets fans really *are* passionate. They just haven’t had much to cheer about in recent years.

At this game, there was one section (well, technically three sections) where the fans were going absolutely insane. Check it out: 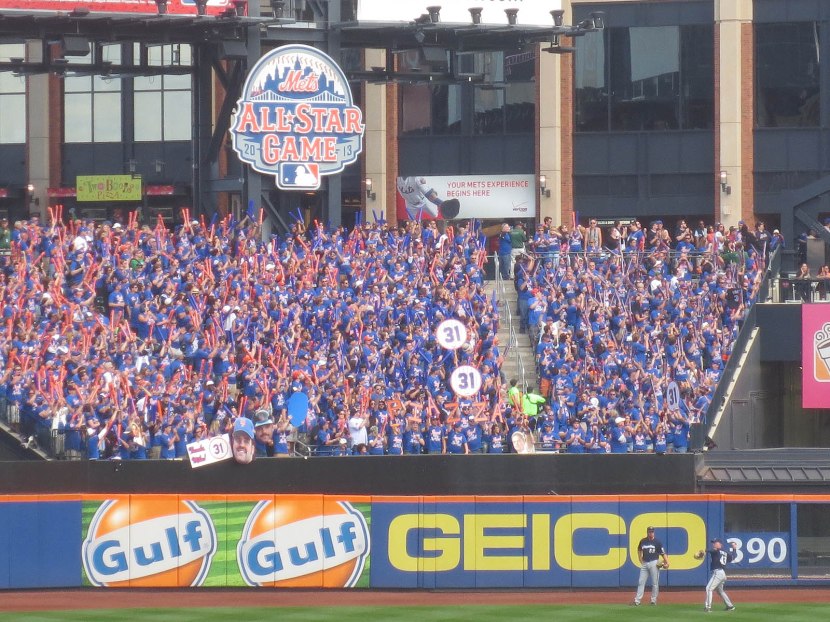 That area is called the Big Apple Seats, and it was filled with a dedicated group of fans who’ve come to be known as The 7 Line Army.

In the photo above, did you notice the Brewers playing catch in the outfield? I’d been thinking about going for a pre-game toss-up out there, but even if I’d managed to elude stadium security and sneak down into that section, there would’ve been nowhere for me to go. There was a wall of people in the front row, and every seat was full — a true army, indeed.

Therefore, all I could do was hold my ground on the 3rd base side and watch the rest of the ceremony.

Piazza finally stepped up to the podium . . .

. . . and gave a pretty good speech. My favorite line came when he was talking about his family. He thanked his wife and two young daughters for being there and excused his infant son’s absence. In talking about his son, Piazza said, “I’m gonna teach him to hit, and the rest is up to him.”

That got a huge cheer from the crowd.

After the speech, Piazza threw the ceremonial first pitch to David Wright:

Here’s where I was sitting when the game got underway:

Approximately one minute after I took that photo, the batter — Jeff Bianchi — yanked a foul grounder that ricocheted off the dugout railing and rolled back out onto the field near Brewers 3rd base coach Ed Sedar. By the time Sedar picked up the ball, I was already calling out to him from the front row, and he tossed it to me.

Take a look at the ball:

It was a thing of beauty, and I managed to snag one more — a 3rd-out ball tossed by Yuniesky Betancourt after the 6th inning.

Commemorative balls aside, the game was very exciting. Neither team had an extra-base hit, but there was plenty of action on the base paths. Eric Young Jr. swiped two bags — No. 45 and 46 — to break a tie for the National League lead with Jean Segura; Young and Juan Lagares each threw out a runner at home plate, which pretty much saved the game. Final score: Mets 3, Brewers 2.

After the final out, just about everyone on the Mets flung their caps into the crowd. Of course, that took place behind the 1st-base dugout so all I could do was watch helplessly: 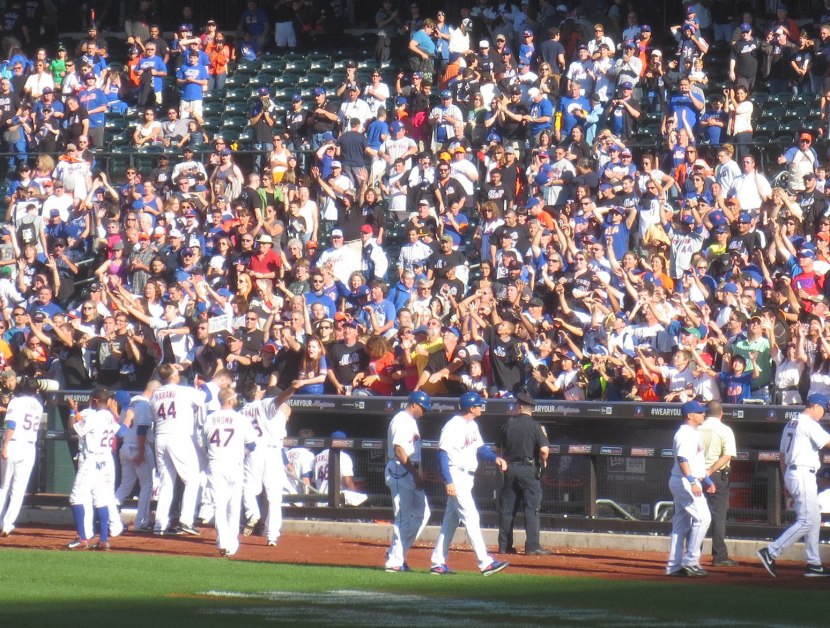 Meanwhile, this was the scene on the 3rd-base side:

What a letdown, huh?

Actually, it wasn’t a letdown at all. Look what I ended up getting:

Basically, one of the coaches gave me the lineup card as soon as the game ended, and then several minutes later, when bullpen catcher Marcus Hanel and bullpen coach Lee Tunnell walked across the field, I got a ball from Tunnel and a cap from . . . someone. After both of those guys had disappeared from sight, a hand poked up beyond the far edge of the dugout roof and flung the cap at me. I was so surprised that I didn’t catch it cleanly or even see it coming. The cap hit me in the stomach, so after flinching for a split-second, I extended my arms and awkwardly grabbed it. Wow!! I didn’t know whose cap it was until I looked inside and saw the number 43 written there: 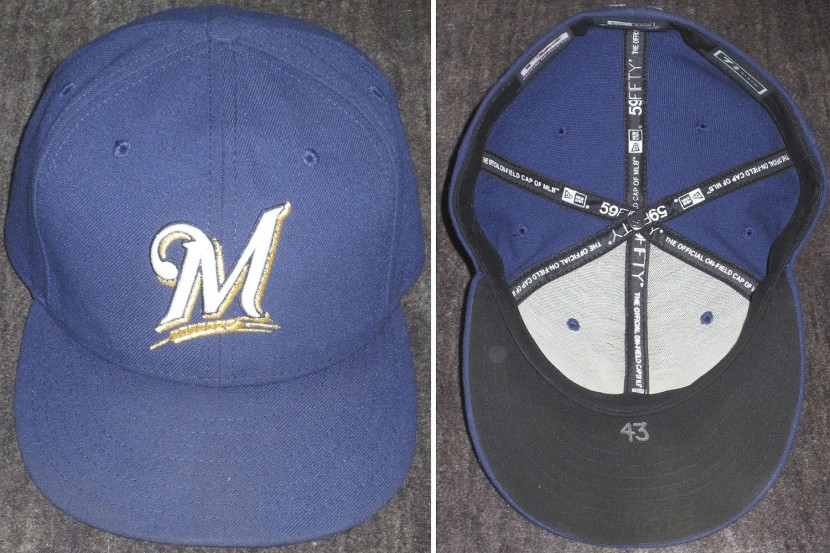 I took a peek at my roster, and whaddaya know . . . Lee Tunnell.

On my way out of the stadium, I photographed the lineup card: 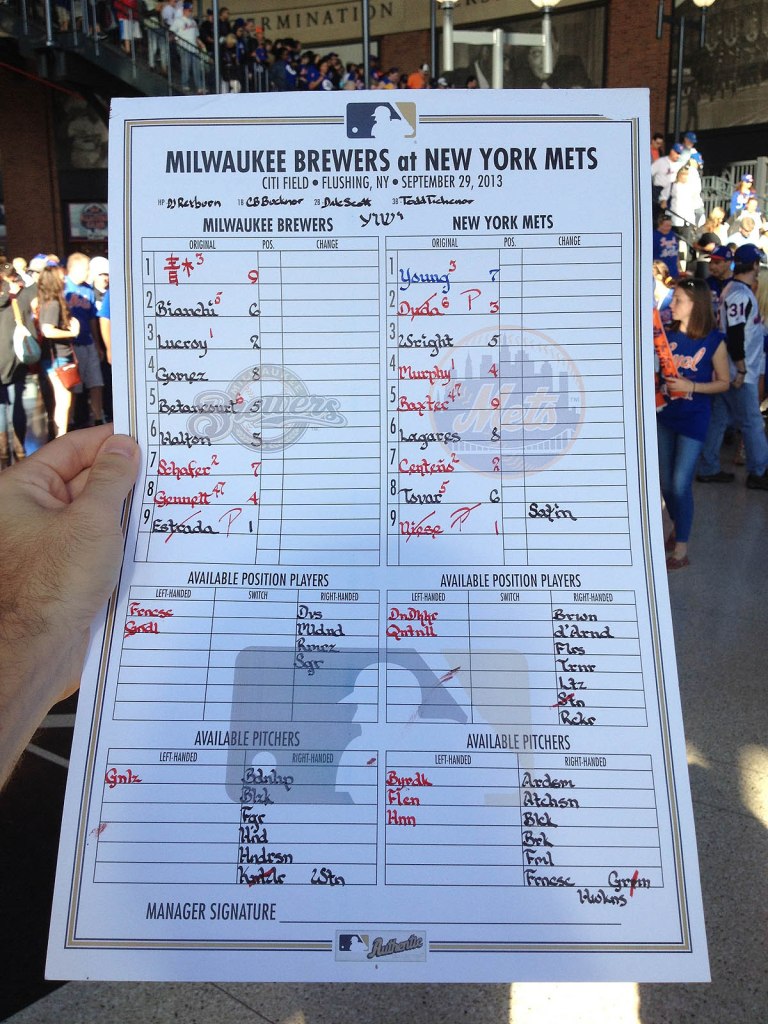 On my way to the subway, some random guy saw it and said, “They didn’t give you a protective sleeve for that?!”

I explained that I hadn’t bought it at the team store.

When I got home, I scanned the lineup card and photographed the four baseballs that I’d snagged:

Game-used Piazza balls were selling at the stadium for $125 by the end of the day. I ended up giving one of mine to Ben.

• 4 baseballs at this game

• 963 consecutive games with at least one ball

• 646 consecutive games in New York with at least one ball

• 434 consecutive Mets home games with at least one ball

(For every stadium this season at which I’ve snagged a game-used ball, BIGS Sunflower Seeds will donate $500 to Pitch In For Baseball, a non-profit charity that provides baseball equipment to underprivileged kids all over the world. In addition to that, I’m doing my own fundraiser again this season for Pitch In For Baseball, and if you donate money, you’ll be eligible to win one of these prizes.)

• 39 donors for my fundraiser

• $15,000 from BIGS Sunflower Seeds for my game-used baseballs