Do you remember these two lovely ladies from the Sweets & Snacks Expo that I attended before the game on 5/22/13 at U.S. Cellular Field? One of them now works full-time at the BIGS Sunflower Seeds headquarters in Boulder, Colorado, so when I landed at the Denver airport, she picked me up and gave me a ride:

That’s Jenny in the photo above. She dropped me off at my hotel, and it wasn’t long before I ordered pizza: 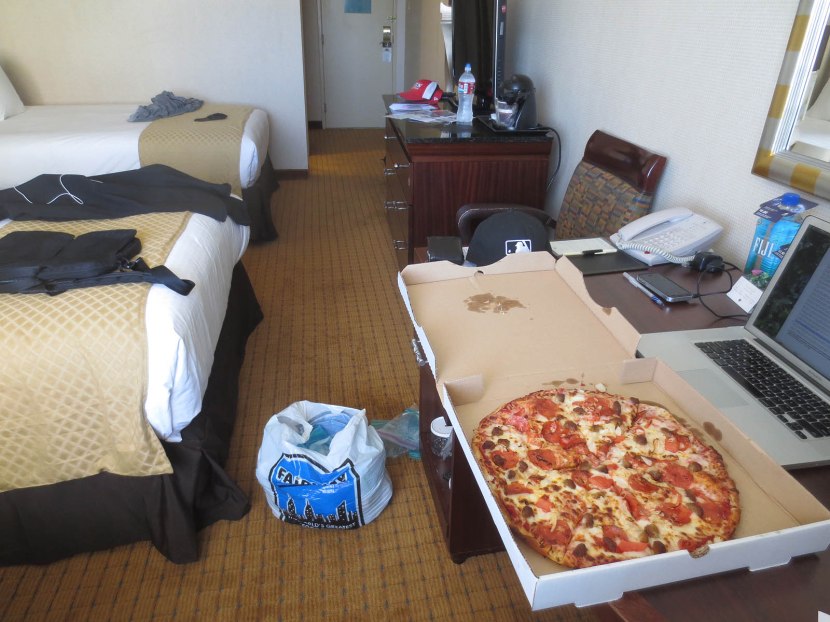 At around 3:30pm, Neal Stewart from BIGS gave me a ride to Coors Field. (He couldn’t stay for the game because he was scheduled to play in a tennis tournament.) I headed over to Gate E and was glad to see these folks:

That’s legendary ballhawk Dan Sauvageau and his ten-year-old daughter, Emily. If they look familiar, that’s because I’ve known them for years and included a photo of them on page 287 of The Baseball.

Shortly after the stadium opened at 4:30pm, I snagged my first ball of the day:

It was a ground-rule double that I caught in left-center field. All I know is that it was hit by a right-handed batter on the Rockies.

Look who I ran into after that:

That’s another well-known ballhawk named Robert Harmon. You might remember him from this article I wrote five years ago about Barry Bonds’ final home run, and if you look closely at the double-photo above, you can see that he’s wearing Carlos Gonzalez’s glove.

When the Cardinals started hitting, I hung out in center field for a bit . . .

. . . and when the rest of the stadium opened at 5pm, I headed to right field:

My second ball of the day was thrown by this guy:

At the time, I had no idea who he was. I assumed it was Adron Chambers, but found out later that it was Sam Freeman.

Ball No. 3 was a homer (no idea who hit it) that landed several rows in front of me and actually ricocheted back. How often does THAT happen?

My fourth and fifth balls were chucked randomly into the seats by the same player. Once again, at the time, I had no idea who he was, so I grabbed a photo of him . . .

. . . and found out later that it was Carlos Martinez.

After BP, I gave one of my baseballs to a kid and headed over here:

The previous photo was taken from the concourse that runs behind/above the bullpens. Did you notice the ball sitting directly below me? You can see part of it poking out between the rocks. Unfortunately I failed to snag it with my glove trick, but it was fun trying and nice that stadium security didn’t notice or care.

I headed up to the second deck when two security guards started retrieving all the balls that had landed near the fountain in deep center field. See the guards in the following photo?

They didn’t give away any of the balls. Instead they placed them in the Rockies’ bullpen so that coach Jerry Weinstein could use them for a catching drill with Wilin Rosario. Here’s a photo that I took just before they finished:

Moments later, Weinstein tossed a few balls into the crowd, and I got one. That was my sixth of the day, and in case you’re wondering, none of them were commemorative.

Just before the game, I headed back up to the second deck . . .

Here’s where I sat for most of the game: 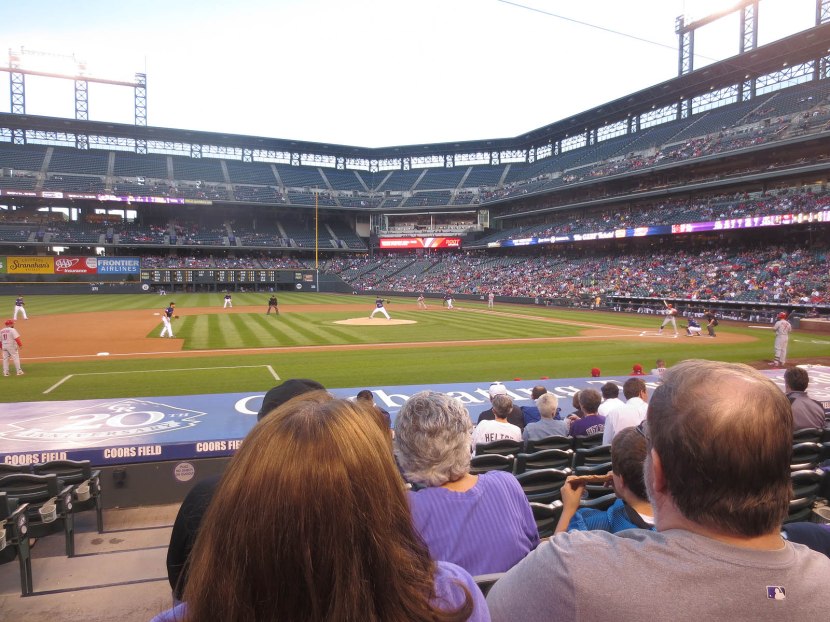 Normally I would’ve been hanging out in left field, but because of the charity/ballhawking challenge from the folks at BIGS Sunflower Seeds, I decided to stay closer to the action. As I’ve been mentioning since April, BIGS is donating $500 to Pitch In For Baseball for every stadium this season at which I snag a game-used ball. Entering this game, they had sent me to 29 stadiums, and I’d succeeded in getting a gamer at all of them.

The previous day, Todd Helton had announced his retirement, and before this game, he held a press conference to talk about it. Therefore, he received a standing ovation before stepping to the plate in the bottom of the 1st inning: 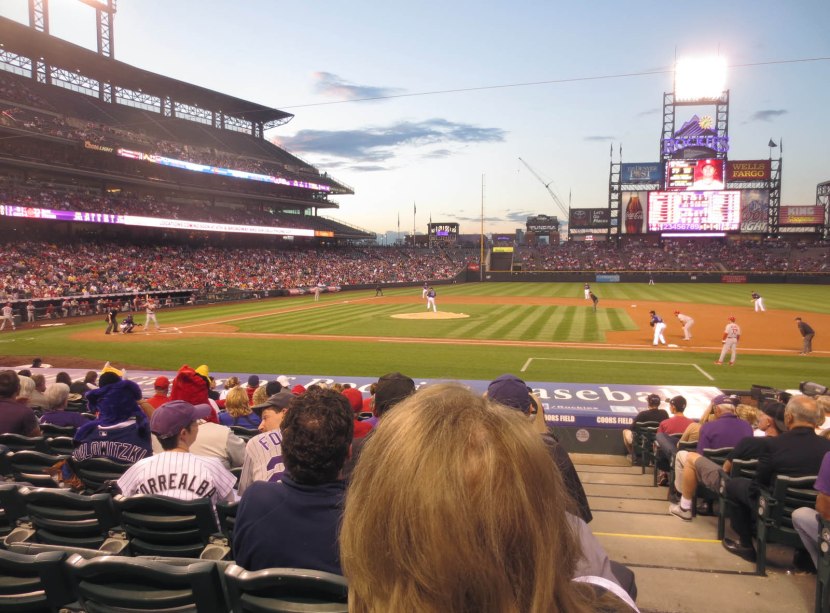 . . . but was prevented from crossing the yellow line on the staircase. See it there in the photo above? What a stupid rule. I can understand not allowing people to enter the first few rows while the game is in progress, but not even during inning breaks? C’mon.

After that, I gave up on the 1st-base side and stayed behind the Cardinals’ dugout. Inning after inning, for various reasons, I failed to snag a 3rd-out ball. After the bottom of the 6th, I was convinced that I wasn’t going to get one, and you know what? I was okay with that . . . kind of. Obviously I was excited about going 30-for-30, but I still had two more games here, so I figured it was going to happen.

When Todd Helton led off the bottom of the 7th with a foul ball into the seats on the 3rd-base side, I didn’t think much of it. But then he worked the count and hit another. And another. And yeah, another. One of the balls had landed two sections to my left, and another landed one section to my right. I remember thinking, “He’s due to hit one here,” and on the very next pitch, he hit a towering pop-up that appeared to be heading several rows behind me. I jumped out of my seat and turned around so that I was facing away from the field and began running up the steps — or rather, I *tried* to run up the steps. I got blocked by a beer vendor who was oblivious. Hoping to get him to step aside, I yelled, “Excuse me!! Excuse me!! Excuse me!!” but he didn’t budge, and I watched helplessly as the ball plummeted toward a man in an end-seat several rows back. But wait! The man didn’t have a glove, and the ball clanked off his bare hands, and by the time it plopped down onto the steps, I had wiggled past the vendor, and I was right there! I’m not sure if I pounced on it fast or if everyone else was just slow (probably a combination), but regardless, I reached down and grabbed the ball with my right hand, and just like that, I had completed the BIGS Baseball Adventure. I was 30-for-30. Somehow I had managed to snag a game-used ball from every major league stadium over the course of one season!

Here’s a photo of the ball: 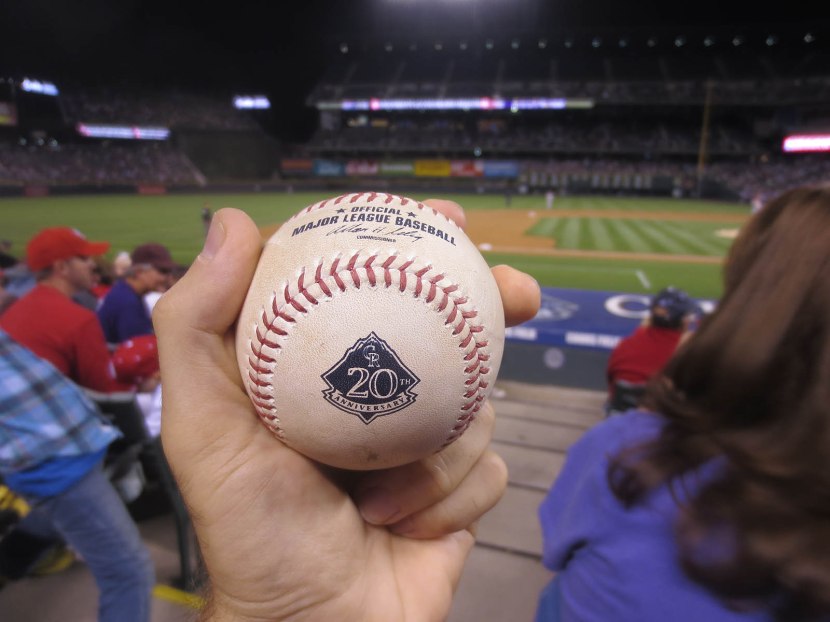 As you can imagine, I was very very very VERY very excited. Has anyone else ever snagged a gamer from all 30 stadiums in one season? There’s no way to verify it, but I’m pretty sure the answer is no. At the start of this season, I believed that I would succeed, but I assumed that (a) I’d attend multiple games at each stadium and (b) there’d be some ohfers along the way. I figured I’d get gamers at 25 or maybe 28 of the stadiums the first time through and then have to revisit the places where I’d failed. But that didn’t happen. Sure, there was the White Sox game in May when I got blanked, but I went back the next day and got a Dustin Pedroia foul ball tossed up by Brian Butterfield. Of the 30 stadiums that I visited this season, there were 16 where I attended just one game, and yes, okay, there were lots of 3rd-out balls along the way, but I still think it’s pretty special.

Several minutes after snagging the Helton foul ball, a Cardinals fan in my row offered to take my picture with it. Here’s why: 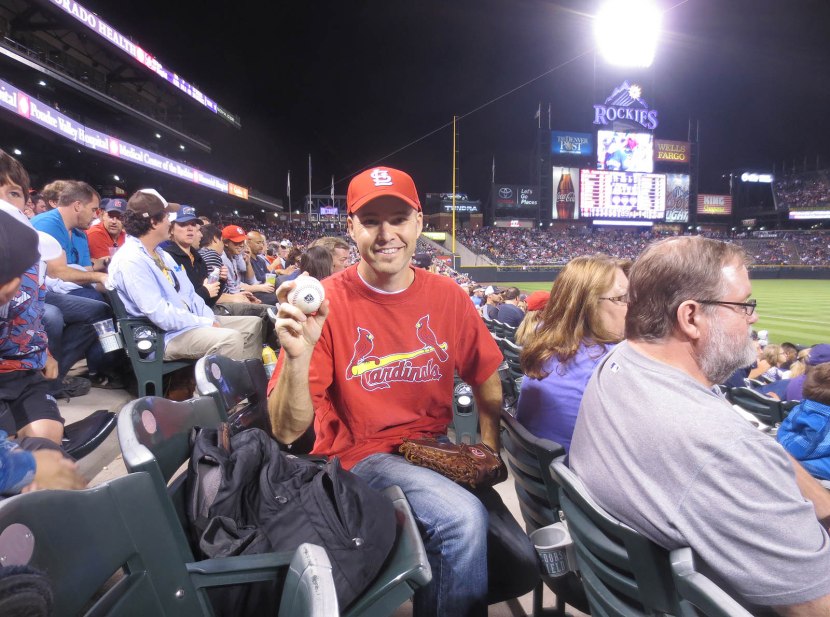 Yeah, I was decked out in Cardinals gear, and as a result, I was shown on the Cardinals’ telecast. Check it out — here’s a screen shot that shows me holding the ball and getting a pat on the back:

Here’s a screen shot that shows the usher asking me if I was okay . . . 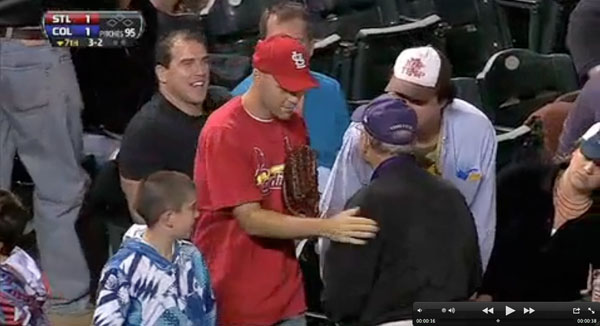 (How awkward would it be if fans congratulated each other like the players do, you know, with pats on the butt? Why do players do that anyway? There’s so much homophobia in the sports world — you’d think it would be the last thing that tough-guy athletes would do to each other.)

Finally, here’s a screen shot of me about to give a high-five . . .

. . . to the guy who ended up taking my picture with the ball.

If you look at the time stamps on the screen shots, you’ll see that I was shown for nine seconds. That’s a lot of airtime for a foul ball — way more than I’ve gotten for many of the home runs I’ve snagged.

In the 8th inning, I changed out of my Cardinals gear, headed to left field, and got someone to take another photo of me with the ball:

. . . but of course there was nothing to run for; the Rockies and Cardinals combined for a whopping total of zero home runs.

Knowing that I’d be giving the Helton foul ball to the folks at BIGS, I really wanted another gamer — or hell, even an umpire ball — for my own collection, so I headed here in the 9th inning:

After the final out of the Rockies’ 6-2 victory, I hurried over to the ump tunnel directly behind home plate. Bill Miller ended up giving a bunch of balls away . . . to other fans. That was disappointing, but again, I still had two more days to make something happen, so whatever.

Robert offered to give me a ride back to my hotel, but first we made a stop at the nearby Blake Street Tavern. Robert had a beer . . . 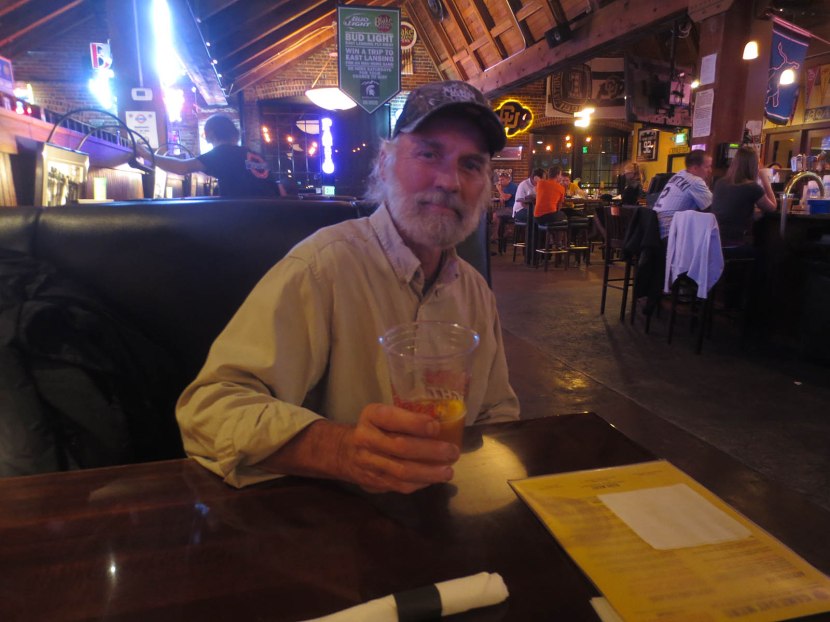 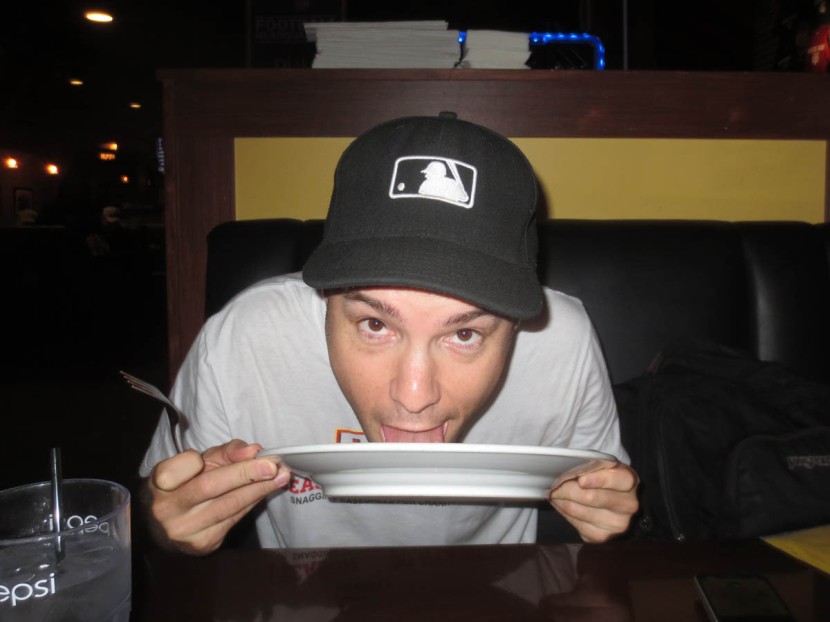 Back at the hotel, I photographed the five balls that I kept:

I forgot to mention that I gave one to a kid on my way out of the stadium, but anyway, check this out: 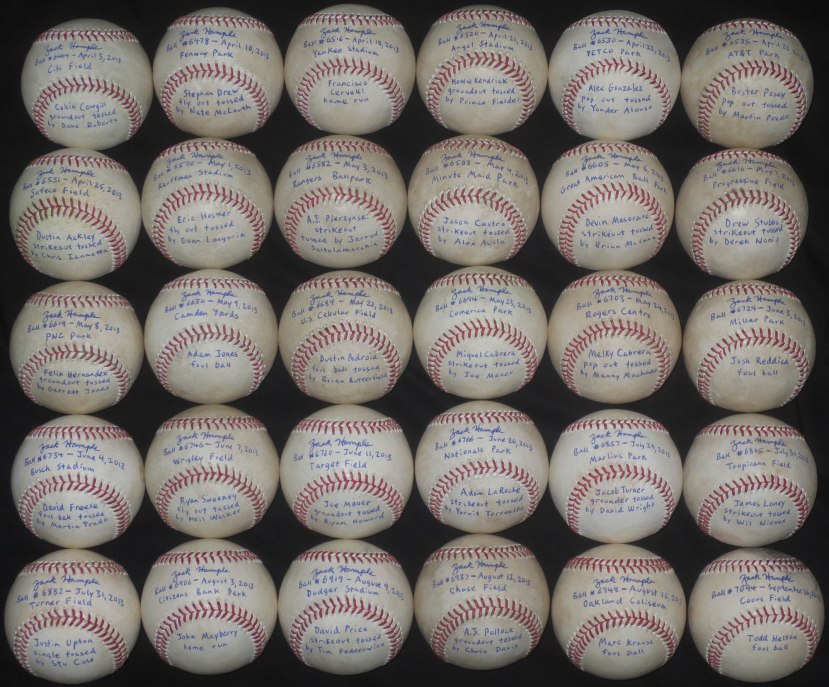 The Helton foul ball is on the lower right in the previous photo; I had brought the other 29 gamers to Denver, and I marked them as per Neal’s wishes. One week earlier, when he first told me that he wanted me to sign each ball and write the number and the date and the name of the stadium and the details about how I got it, I cringed. But you know what? I kinda like how it turned out. As for the fate of these baseballs, the folks at BIGS now own them and are planning — at least for a little while — to display them at their headquarters.

What an amazing season. HUGE thanks to BIGS for making all of it happen.

• 7 baseballs at this game

• 955 consecutive games with at least one ball

(For every stadium this season at which I snag a game-used ball, BIGS Sunflower Seeds will donate $500 to Pitch In For Baseball, a non-profit charity that provides baseball equipment to underprivileged kids all over the world. In addition to that, I’m doing my own fundraiser again this season for Pitch In For Baseball, and if you donate money, you’ll be eligible to win one of these prizes.)

• 39 donors for my fundraiser

• $15,000 from BIGS Sunflower Seeds for my game-used baseballs