My day started with a bus ride to the airport in Los Angeles:

Then I nearly boarded the wrong flight . . .

After settling into my room, I ordered pizza . . .

. . . and began blogging about the previous day’s game at Dodger Stadium.

. . . and caught up briefly outside Gate B with a friend/ballhawk named Tony, who has season tickets. Here he is:

At Chase Field, season ticket holders get in half an hour early. Tony had offered to help, but a different friend hooked me up. (Why is everyone so nice?!)

When the stadium opened, I headed to right field and called out to Heath Bell. In the following photo, you can see him (with the red socks) walking toward me:

He and Josh Collmenter came over to chat for a few minutes:

During that time, a left-handed batter launched a home run into in the swimming pool area on my right. It missed the water and ended up on the walkway, so I tip-toed over and picked it up: 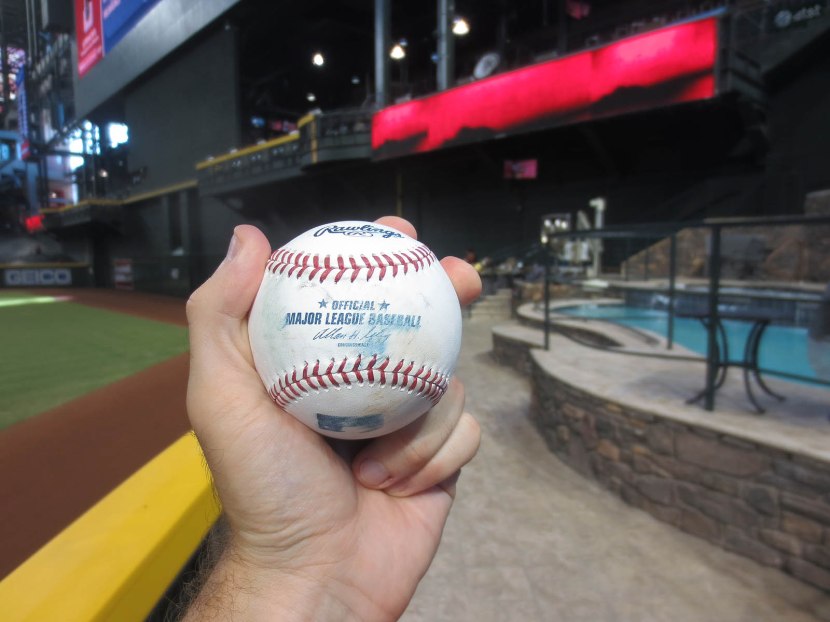 It doesn’t get much easier than that.

Heath and Josh and I mainly talked about my travel schedule — where I’ve been and where I’m heading next on the BIGS Baseball Adventure. They also wanted to hear some details about the black eye I’d gotten twelve days earlier at Turner Field, and finally, I told them about the helicopter stunt, which they somehow hadn’t heard about. Don’t these guys watch SportsCenter every night?

Look who else I saw in right field: 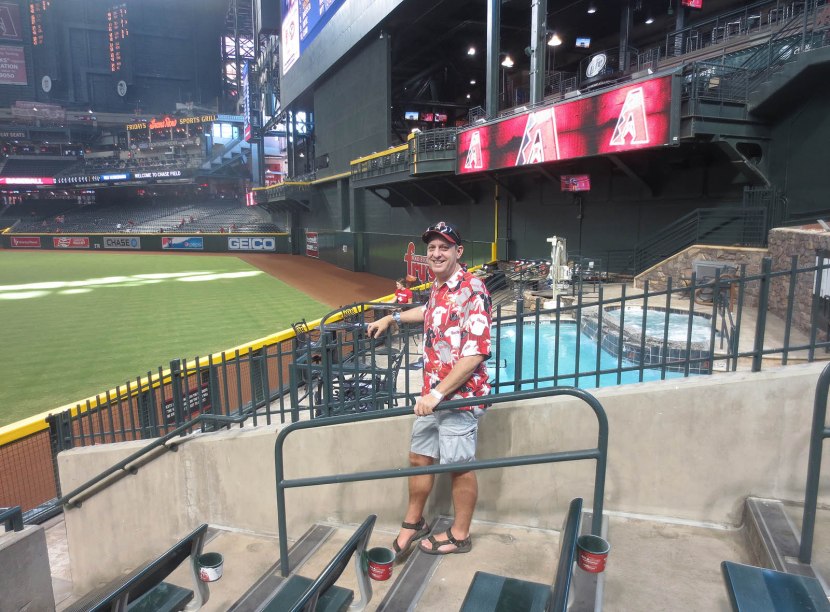 That guy’s name is Jeff Summers, and if he looks familiar, it might be because we’d met six weeks earlier at the MLB Fan Cave. How’s that for random? Take a look at this photo from my blog entry about the game I attended on 7/2/13 at Citi Field? See him there on the couch next to Heath Bell? Jeff is funny and smart and opinionated (and sometimes gets himself into trouble as a result) and writes an entertaining blog. Here’s the link. Check it out. It’s very well written. It would’ve been nice to catch up with him for more than 30 seconds, but hey, the Orioles had taken the field, and I had to spring into action.

I headed into foul territory . . .

. . . and ended up playing catch for a minute with Brian Matusz — one of several Orioles who recognize me. Unfortunately, he didn’t let me keep the ball at the end, so I decided not to count it in my stats. I could make a case for it and argue that I “chose to give it to him,” but for some reason, it just didn’t seem right at the time.

My official second ball of the day was thrown by Miguel Gonzalez in left-center field. Here’s what it looked like out there: 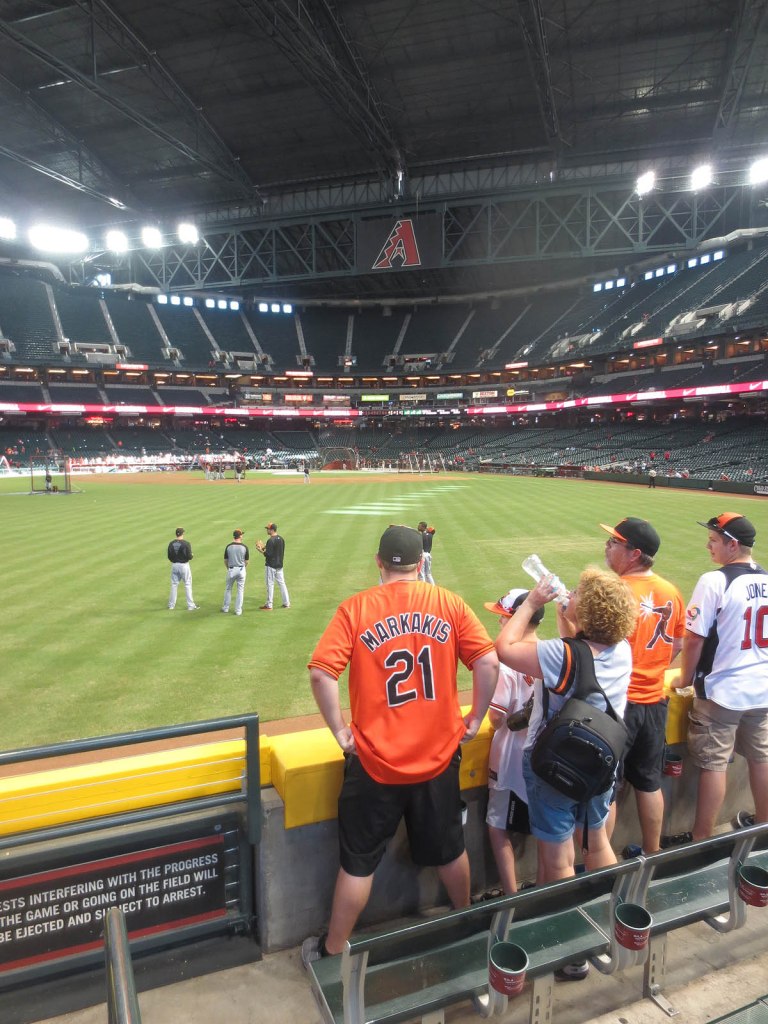 You’d think that Chris Davis would’ve hit the most impressive home run during BP, but it was actually Adam Jones. In the following photo, the red arrow is pointing to the spot where one of his blasts “landed”:

I used the glove trick to snag my third ball off the warning track in left-center, and bullpen catcher Rudy Arias tossed me No. 4 in right field.

That was it for BP — pretty sad.

Before the game, I caught up with a 16-year-old fan from Los Angeles named Aaron, who’d brought his copy of The Baseball. Here we are:

A little while later, this was my view for pre-game throwing: 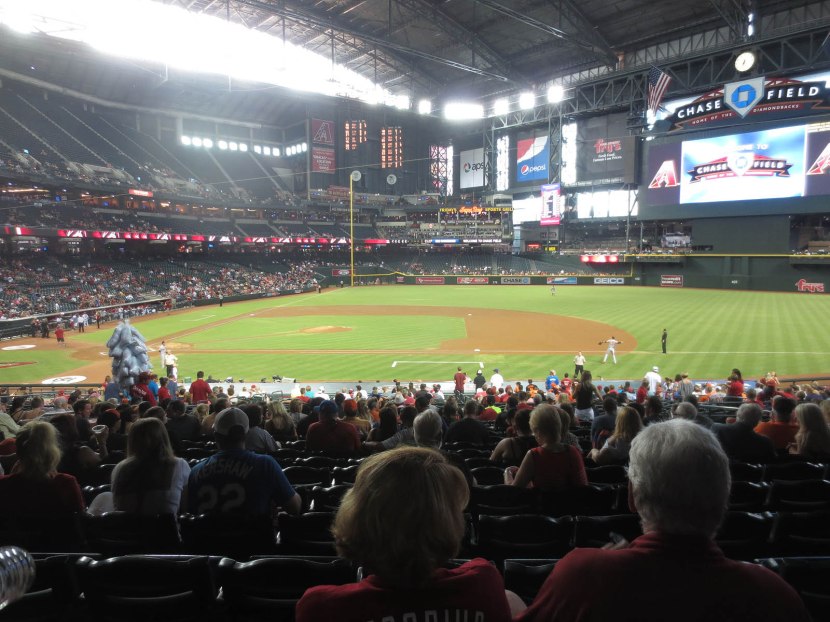 Normally I would’ve been right behind the dugout, but because of the charity challenge from BIGS Sunflower Seeds to snag a game-used ball at every stadium this season, I stayed back. I was concerned that if I got a ball before the game, the players would recognize me, and it might hurt my chances later on when it really mattered.

My actual seat was in the middle of Row 11 behind the 1st-base dugout. Of course, Row 11 was semi-crowded, and I wanted to sit on the end, so I moved back to Row 17, which was empty. In Philadelphia, I would’ve gotten ejected for doing that, but here in Phoenix, it was no problem. An usher came over to ask what was up, and when I told him that I preferred to have some empty seats around me, he let me stay there. WOW!!! Amazing! The Diamondbacks know how to treat people.

The bottom of the 2nd inning was rather eventful. For starters, there was a moment during which five separate “huddles” were taking place on the field:

Orioles 3rd baseman Manny Machado had been called for interference, so manager Buck Showalter was out there discussing/arguing.

That play took place on a stolen base attempt while (MY MAN!!!) Didi Gregorius was batting, so I took advantage of the delay by photographing the jumbotron:

Gregorius reached base on an error, Wade Miley followed with a bullet of a single up the middle, and A.J. Pollock ended the inning with a groundout to 2nd baseman Brian Roberts. Chris Davis caught Roberts’ throw at 1st base, and when he jogged off the field, he tossed it to me. As you can see below, I was rather excited:

As you may already know, BIGS Sunflower Seeds is sponsoring me this season and donating $500 to Pitch In For Baseball for every stadium at which I snag a game-used ball. This one from Davis made it 28-for-28, which means that with BIGS’s generosity, I’ve helped raise $14,000 for the charity. Can you blame me for being pumped up?

My friend Kenny took that previous photo of me. You can see him below, being goofy as usual: 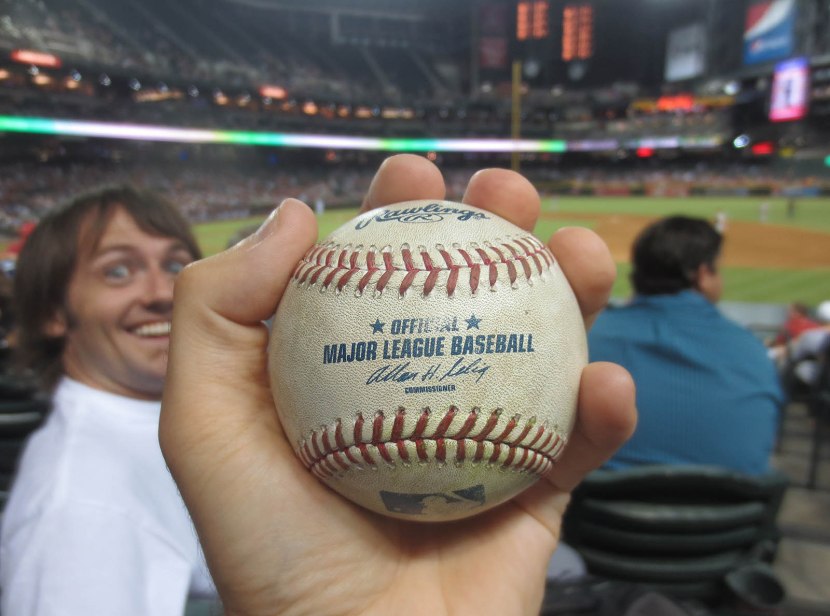 There were five home runs hit in this game, and I didn’t catch any of them. That’s because I stayed behind the dugout all night, and you know what? I stand behind my decision. I was tired and hungry and just wanted to hang out and watch the game from a good spot.

In the 5th inning, I got Chinese food:

In the 6th inning, the Diamondbacks mascots walked behind me: 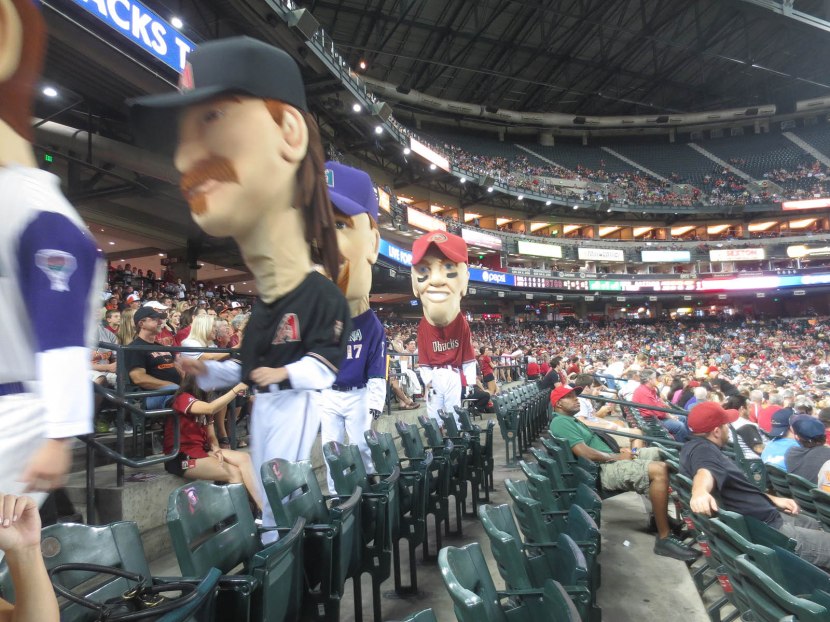 In the 7th inning, I gave one of my BP balls to a little kid in the concourse as I went to get ice cream:

I don’t usually eat like this. When I’m home in New York City, there’s lots of salad and healthy stuff, but when I’m on the road, my diet goes to hell — good thing I run around a lot.

Look who entered the game with two outs in the top of the 8th inning:

That’s Heath Bell on the mound. At the time, the score was tied, and he ended up retiring the only batter he faced. In the bottom of the 8th, Wil Nieves hit a leadoff homer, which should’ve given Heath the win, but stupid Brad Ziegler blew the save and allowed the Orioles to tie the game in the 9th. GAH!!!

That’s when I decided to run out to left field and try to catch a homer in case the D’backs hit a walk-off shot. Adam Eaton, a 5-foot-8 lefty, was due to lead off the bottom of the 9th, followed by righties Paul Goldschmidt and Aaron Hill, so I figured I had time to use the bathroom. I had to pee SO BAD, so I went and did it — no big deal, right? All I had to do was get down into the seats in time for–

Suddenly the crowd erupted, and I had no idea why. It took me a moment to finish, and when I ran out into the concourse, I learned that Eaton had hit a walk-off shot into the swimming pool on the first pitch! Man oh man. Stupid Ziegler got the win, and I missed the most exciting part of the game, but hey, good for the D’backs. They ARE my favorite team (as long as Heath pitches for them).

Before leaving the stadium, I caught up with a friend named Stuart Jon, who used to live in New York, but now resides in Phoenix. Here we are: 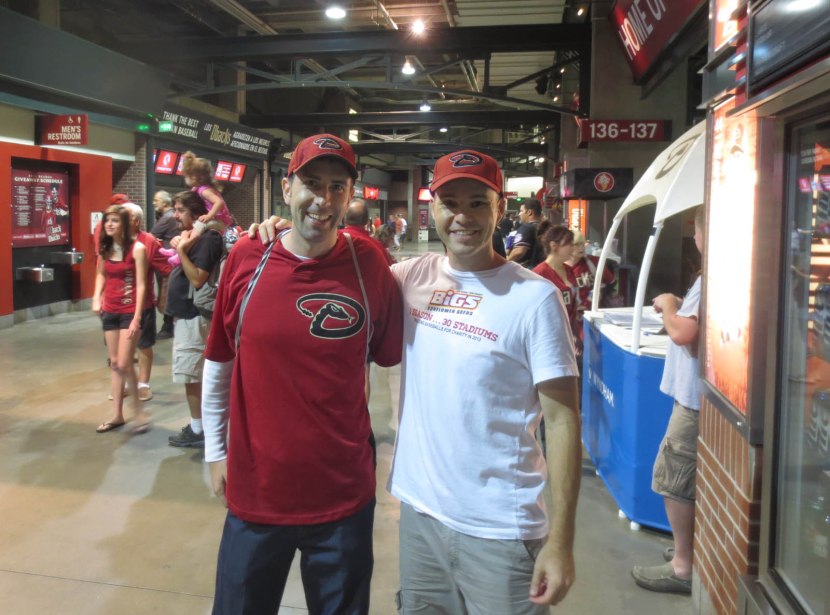 Stuart Jon and I met for the first time on 7/26/09 at Yankee Stadium. Remember this photo of us from that day? No? Well, whatever, *I* remember, and that’s all that matters.

I took one final photo outside the stadium: 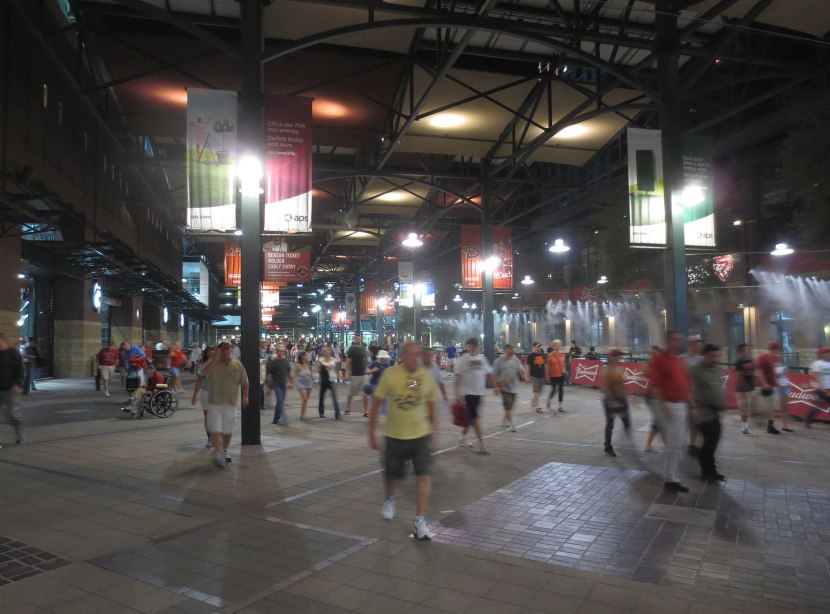 Then I gave another BP ball to a kid and walked back to my hotel — the same place where I stayed during the 2011 Home Run Derby and All-Star Game.

I love it here in Phoenix — even the weather. Seriously. I might have to come back sometime for a 10-game home stand.

• 935 consecutive games with at least one ball

(For every stadium this season at which I snag a game-used ball, BIGS Sunflower Seeds will donate $500 to Pitch In For Baseball, a non-profit charity that provides baseball equipment to underprivileged kids all over the world. In addition to that, I’m doing my own fundraiser again this season for Pitch In For Baseball, and if you donate money, you’ll be eligible to win one of these prizes.)

• 38 donors for my fundraiser

• $14,000 from BIGS Sunflower Seeds for my game-used baseballs