I realize that I’ve started a few recent entries with photos of baseballs, so for a change, here’s a shot that I took while waiting in the shade for the gates to open: 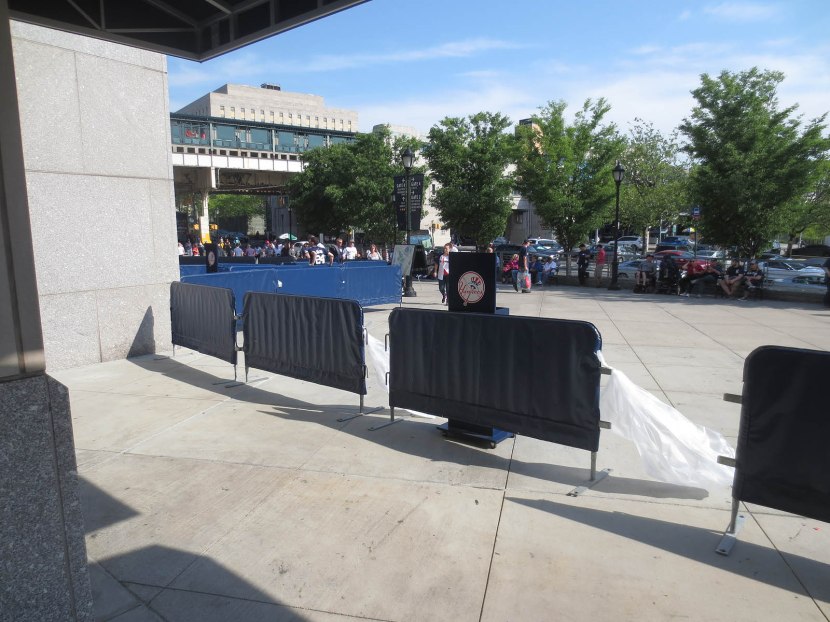 Nothing special — just a different look at a lesser-seen part of Yankee Stadium.

My 1st of the day was my 200th of the season. It was thrown by Phil Hughes in right-center field, and here’s a photo of it:

Moments later, I caught a Brett Gardner homer on the fly (which came right to me) and soon after that, I ran to my left and grabbed a Curtis Granderson homer that had landed in the seats. Check out the beautifully smudged logo on that one:

The next/final group of Yankees had one lefty (Travis Hafner) and three righties (Ben Francisco, Alberto Gonzalez, and Austin Romine), so I went to left field. I figured it was a good decision, but as it turned out, Hafner hit more balls into the right field seats than all three righties hit to left.

This was my view: 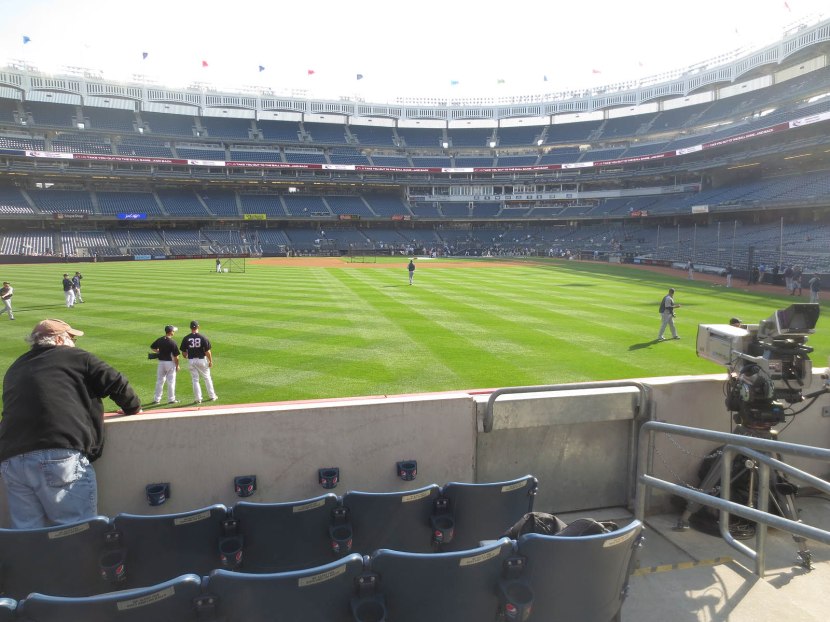 I caught one home run there on the fly (I’m not sure who hit it) after drifting down the stairs and reaching over the wall beside the TV camera. That was my 4th ball of the day.

In the photo above, the player wearing No. 38 is Preston Claiborne. Several minutes before I caught the home run, I had asked him for a ball. His response went as follows: “Didn’t you get about six yesterday?” (No, Preston, I got eleven. Pay attention.)

When the Mariners started hitting, I headed back to right field and battled the sun. The following photo kinda shows how hard it was to see:

My 5th ball was a Jesus Montero homer that I caught on the fly. I drifted 15 feet to my right and jumped a few inches to reach it.

My 6th ball was a Kendrys Morales homer that I should’ve caught on the fly. I expected it to slice more than it did, so I headed down the steps, and it ended up landing on my right. I felt stupid about that one, but hey, at least I got the ball, and by the way, a bit later, Morales hit an opposite-field homer into the second deck in right field! He also went oppo into the right field bleachers. Very impressive.

My 7th ball was a line-drive homer that I caught on the fly in the front row. I’m not sure who hit this one, or either of the next two. Maybe Dustin Ackley?

My 8th ball was another line-drive homer that I caught on the fly, this time looking directly into the sun. I had seen the ball go up in the air, and I knew that it was heading to my left, so I began drifting in that direction. Then I completely lost sight of it, so I stopped moving and looked to the  to the side and waited for it to reenter my line of vision. At the very last second, I saw it flying toward me, so I lunged to the left and somehow managed to glove it. There were people all around, but no one else had even flinched. We were all temporarily blinded, and I ended up seeing spots for next minute. Look what number ball this was for me:

How appropriate that the ball with “666” — and then some — nearly ruined me.

My final ball of BP was another homer that I caught on the fly. I had to run 40 feet to my right and jump as high as possible in order to backhand it. I’m sure it looked impressive, but the previous ball that had ended up in the sun was much more challenging. Anyway, I gave the ball to the nearest kid and discovered later that someone had tweeted about it:

Thank you, Joey Bag of Donuts. Much appreciated.

When I headed through the tunnel and reached the concourse, I was recognized by two guys named Sean and Tom. They’ve been reading my blog and wanted to say hey, so we chatted for a few minutes and eventually asked a cop to take our photo. I would’ve spent more time with them, but I needed to meet up with a friend who had access to the Audi Club.

The first thing I did was show my friend’s ticket to a security guard to go here: 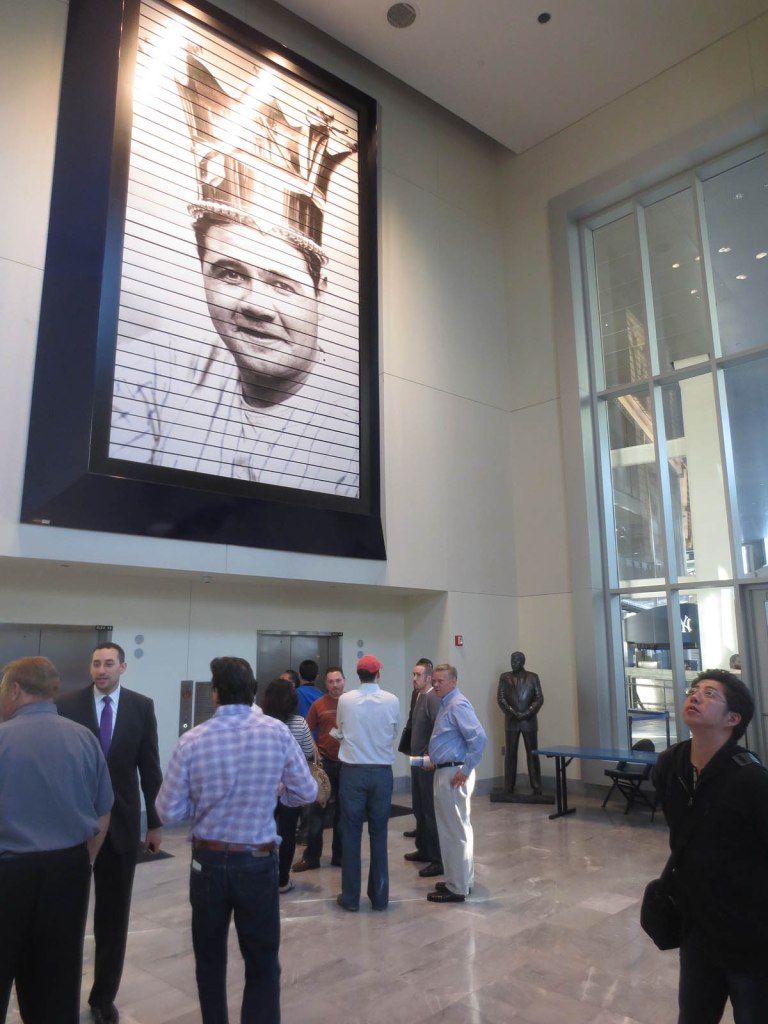 Did you see the elevators under Babe Ruth? I rode one to the “250 Level,” and when I got out, this was the view:

In the photo above, did you notice the “suite level” sign on the right? The guard standing below it let me take a peek inside. There was some sort of office directly behind him . . .

. . . and a mosaic-lookin’ thing from the Old Yankee Stadium on the wall nearby: 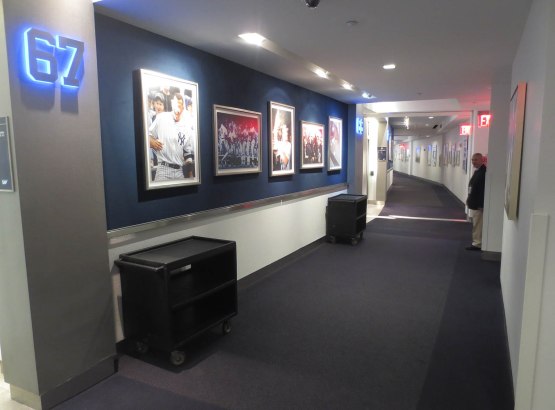 The word “sterile” comes to mind. It was nice to see all this stuff for the first time, but I wouldn’t want to be there for an entire game.

Back in the elevator area, I took a photo of the entrance to the Audi Club: 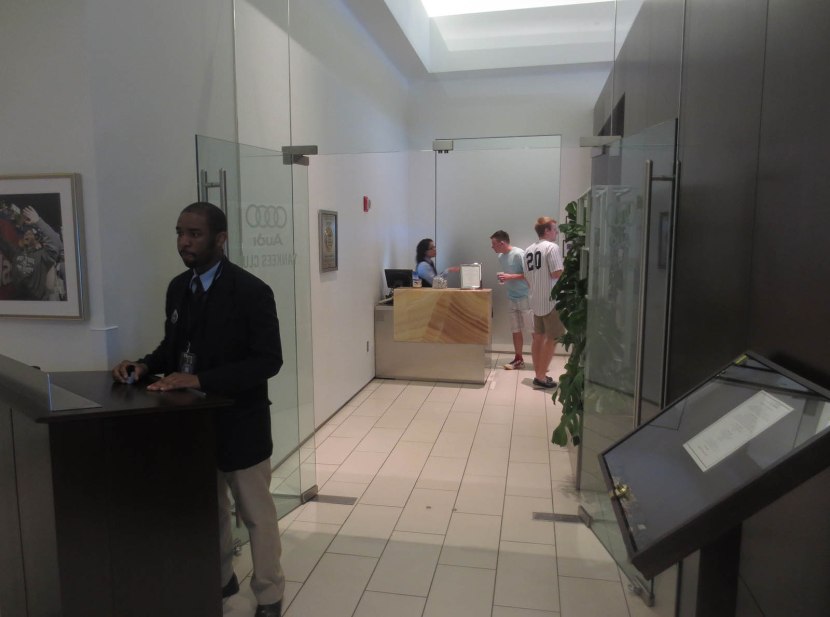 I wasn’t sure if I was gonna be able to get in. Why? Because the Audi Club page on the Yankees’ website says, “Appropriate attire is required at all times. Attire will be deemed appropriate at the sole discretion of the New York Yankees.” And here I was wearing sneakers, jeans, a sweaty t-shirt, and a baseball cap.

The guard let me in, and I wasn’t the least bit underdressed. (“Appropriate attire” my ass.) Here’s what it looked like when I headed inside: 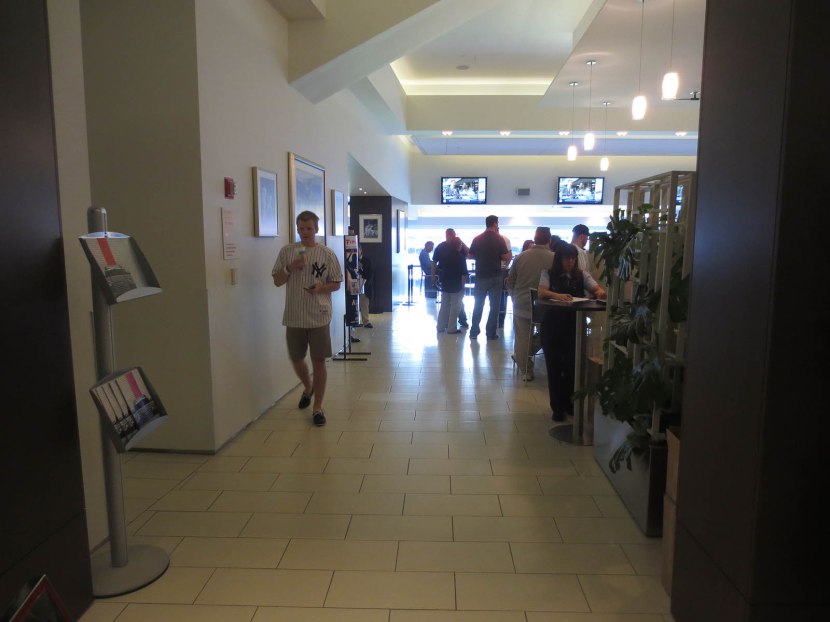 In the photo above, the metal stand on the left has Audi pamphlets.

The club has a bar, of course:

On the other side of the bar, two guards were blocking a dining area:

They told me that for $65, I could go in there and enjoy the buffet. (Ha-HAAAAAA!!! Good one, Yankees.) It was the least baseball-y atmosphere that I’ve ever experienced in a stadium, and given the location of this club, I’m not surprised. Check out the view:

Here’s a photo of the seating area: 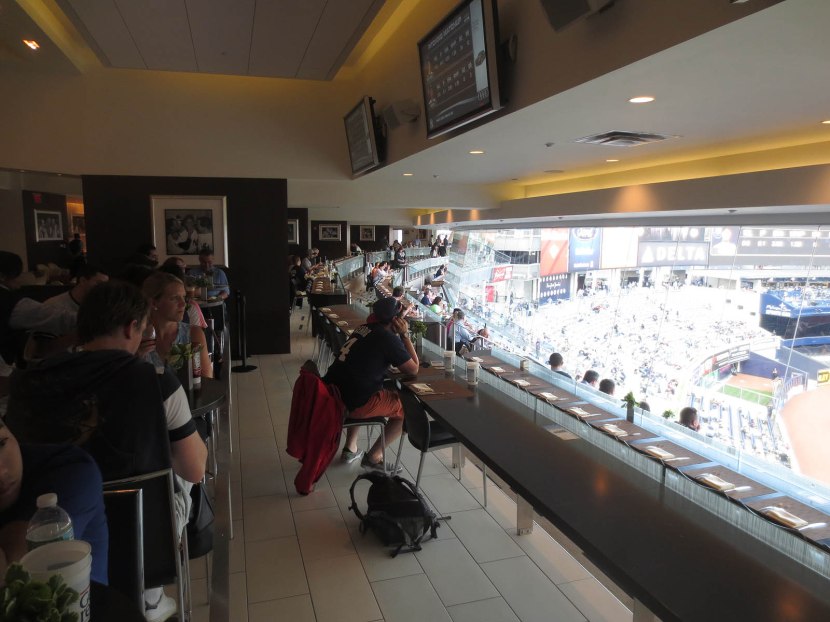 The Audi Club feels like an airport (although that’s an insult to some lovely airports out there), and of course it’s in the worst location imaginable — just below the upper deck, all the way out past the left field foul pole. It strikes me as a place for people with crappy seats (who think they have good seats) to go and feel special. I can wrap my brain around some of the most heinous crimes that people have committed throughout history, but I really don’t understand why anyone would want to spend time in the Audi Club at Yankee Stadium.

Shortly before game time, I returned the club-level ticket to my friend and headed out to my normal spot in straight-away right field. That’s where I snagged my 10th and final ball of the day — a pre-game toss-up from the bullpen by Yankees coach Mike Harkey, which I handed to a group of fans seated nearby. I’ve gotten more than half a dozen from him this season. 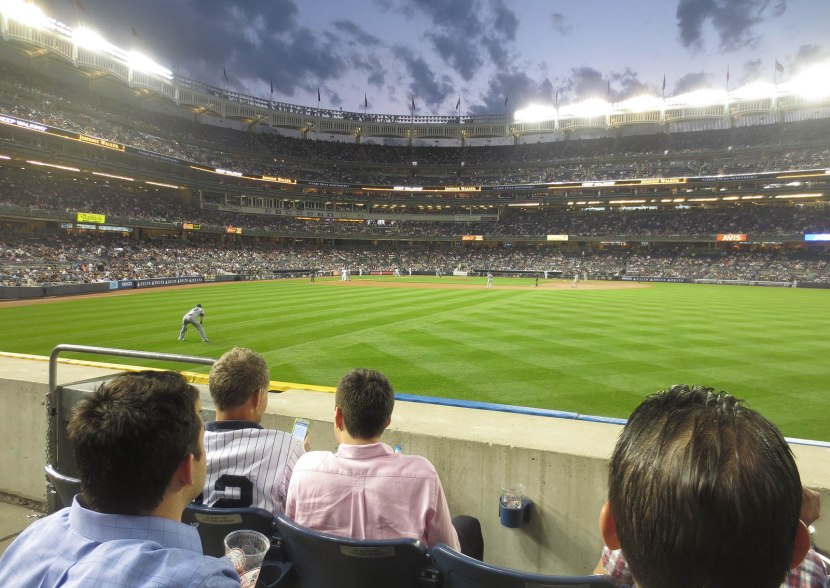 The good thing about it was that the Yankees lost, 3-2. The bad thing was that the security guard was out to get me. As I tweeted in the middle innings, I had a ticket in the middle of Row 12 (which is the 3rd row in that section). I wanted to move back to an end seat in Row 16, but the guard wouldn’t let me. He told me that I had to sit *in* my seat, yet he didn’t stop anyone else from moving around. The section was two-thirds empty. There was plenty of room, especially as the game dragged on, but the guard wouldn’t let me budge. Eventually, I moved down one row (where there was lots more space), and when he saw me, he said, “Now you’re just trying to play games with me,” and he ordered me back to my seat. This is the same guard who (a) spends half of every game on his phone, (b) has no problem with fans cursing loudly at the players, and (c) told me during the previous home stand that I’m not allowed to leave my section to catch home runs, yet never enforced that rule with any other fans. This guard (who, by the way, is 19 years old) is out of control, and I don’t know what to do about it. I’ve given him baseballs. I’ve talked at length with him. He knows about my collection and the charity. He even tried out for the baseball team at George Washington High School, where I’m great friends with the coach. What’s the deal? Can anyone offer some advice? I don’t need special privileges in right field. I just want to be left alone.

I’m so pissed at the Yankees that words can’t begin to describe it. The way their employees treat people is sickening, yet I keep going back. Why? Because I love baseball more than I hate their stadium, but I’m not sure how much more of this I can take.

During the game, I learned that my segment had aired on the MLB Network. It would’ve been nice to get some notice, but whatever. This is the piece that was taped on 5/7/13 at Progressive Field, and I think it turned out pretty well. It’s only a minute and a half, so check it out:

Anyway, here are the eight baseballs that I kept . . .

. . . and here’s the one with the best invisible ink stamp:

Did I mention that I’m pissed off?

• 898 consecutive games with at least one ball

• 26 donors for my fundraiser

• $339.67 raised this season through my fundraiser

• $7,000 from BIGS Sunflower Seeds for my game-used baseballs