The good news is that I caught seven home runs on the fly during batting practice. The bad news is that there’s not a single photo of me in action, so I’ll have to describe how it all went down . . .

The first was thrown by Brett Marshall, and I’ll admit that I didn’t deserve it. My friend Ben Weil had called out to him, but when Marshall looked up, he saw me first.

The second was a Brett Gardner homer that I caught on the fly. I drifted about 25 feet to my left and jumped as high as I could for it.

The third was a Lyle Overbay homer. It was pretty much hit right to me — I might’ve ranged 10 feet to my left — but the challenge was the sun. In the late afternoon, visibility in right field at Yankee Stadium is brutal.

For the next/final group of Yankee hitters, I went to left field and caught two more homers on the fly. I’m not sure who hit them, but I remember exactly what happened. The first was a lazy fly ball that barely cleared the wall, just to the right of the TV camera. A gloveless man was standing there, so I climbed down over a couple rows of seats to get behind him, and at the last second, I flinched (so as not to get hit in the face by a potential deflection) and reached across my body and blindly stuck out my glove in the spot where the ball was heading. The next home run, a well-hit ball heading roughly 20 feet to my left, appeared to be falling short of my row, so I took a step down before cutting across. Stupid me — the ball ended up carrying into the row where I’d started, and I had to jump high to catch it.

When the Mariners started hitting, I went back to right field and got my 6th ball of the day tossed by Aaron Harang. My 7th ball was a towering homer (possibly hit by Michael Saunders) that I caught just behind Ben in the 2nd row near the bullpen. My 8th ball was a line-drive to straight-away right field (possibly hit by Endy Chavez) that bounced off the warning track and skipped over the wall and hit an unsuspecting fat guy in the belly. I picked up the ball with my glove and handed it to him.

Take a look at the following photo, and then I’ll point something out: 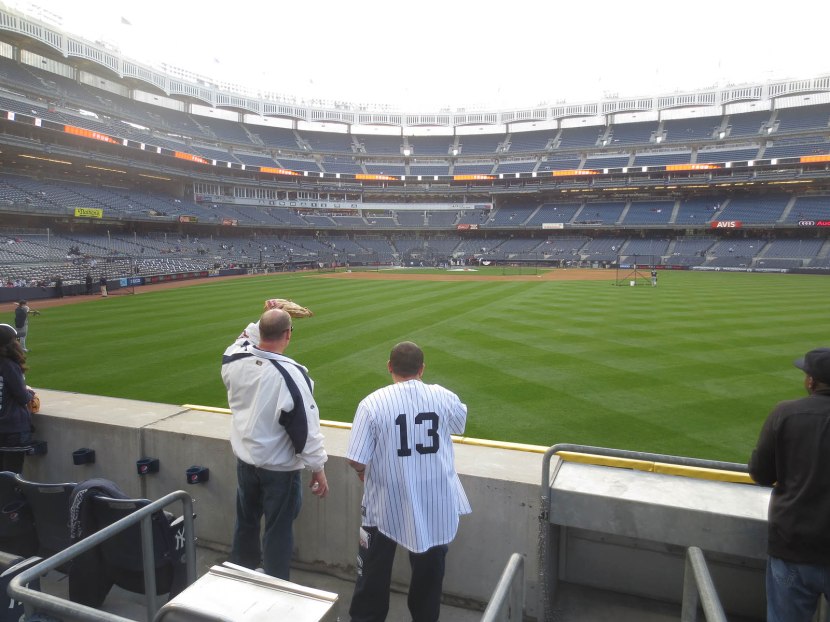 Do you see the fan who’s using his glove to shield his eyes? See the baseball in his right hand? That was my 9th ball of the day — another homer that I caught on the fly. It was hit *right* to him, but he lost it in the sun. I caught it after climbing down into the camera well and pulling another flinch-job. I think the ball actually tipped off his glove on its way into mine. I didn’t need to give it to him — grown men with gloves don’t get much sympathy from anyone — but it just seemed like a nice thing to do. He was so thankful that he offered to buy me a beer. I thought about asking for a milkshake instead, but ultimately declined.

My 10th ball was a homer by a right-handed batter that I caught on the fly in right field. There was nothing fancy about it. I was standing one and a half sections away from the bullpen, and it came right to me in the 3rd row. Then I handed the ball to the nearest kid.

Even though I was catching balls all over the place, no one (except Ben) was pissed off because I gave a bunch away. In fact, I later gave away a fourth ball to a kid sitting in the front row.

Now I’ll fess up about the home run ball that I absolutely butchered. Man, it hurts to even write about it, but anyway, when I was in left field, I somehow wasn’t paying attention when a deep fly ball started sailing in my direction. I was in the 4th row, and by the time I looked up and saw it, I realized that it was barely going to clear the outfield wall. In my attempt to climb down into the camera well, I took a bad route and got tangled up on the railings. Still, I might’ve been able to lunge for the ball and catch it on the fly, but the camera was kind of in the way, and I got nervous about taking a deflection in the face, so I pulled back and planned to grab it after it landed. The ball ended up deflecting perfectly to me — a nice, chest-high bounce straight into the air, but in my rush to snag it (which involved swiping at it with my bare hand), I managed to swat it back onto the field. GAH!!! If there’s one good thing about the whole situation, it’s that the ball ended up getting tossed to a little kid, but wow, other than flat-out dropping a ball that comes right to you, it’s not possible to mess up worse than I did.

Just before the game got underway, I got my 11th ball thrown from the Yankees’ bullpen by coach Mike Harkey.

Look what happened in the top of the 1st inning:

The Mariners scored SEVEN runs off Phil Hughes, including a grand slam by Raul Ibanez, which ended up here:

In the photo above, do you see the ball on the dirt strip on the right? Well, after it sat there for 15 minutes, Yankees bullpen catcher Roman Rodriguez eventually picked it up and tossed it into the ball bag with all the other balls. That was painful.

Here’s a random piece of trivia for you, courtesy of the jumbotron:

I know I complain a lot about Yankee Stadium, but there *are* some good things, including the random/interesting facts that get displayed during the game. Thanks to the jumbotron, I also learned that Ibanez (who, by the way, later hit an opposite-field two-run homer) is one of four players with three different stints with the Mariners. I can’t think of the other three. Can you?

This was my view late in the game:

I really thought I was going to catch a home run, but other than the Ibanez granny, nothing came close. The game was so lopsided by the end (final score: Mariners 12, Yankees 2) that Joe Girardi brought in a position player — infielder Alberto Gonzalez — to pitch with two outs in the 9th. Throwing 83mph fastballs, he got Robert Andino to fly out to right fielder Ichiro Suzuki.

• 897 consecutive games with at least one ball

• 26 donors for my fundraiser

• $323.37 raised this season through my fundraiser

• $7,000 from BIGS Sunflower Seeds for my game-used baseballs

Finally, of the seven balls that I kept, five have invisible ink stamps. Here’s a side-by-side comparison in regular light versus black light:

If I had more time (and more space in my luggage on road trips), I’d post black light pics in every entry.