I woke up at 5:30am with four hours of sleep and jumped in a cab to a nearby radio station:

Neal Stewart from BIGS Sunflower Seeds was with me. When we reached our destination, he signed us in at the front desk . . .

In the photo above, did you notice the glass door on the left? Well, when I peeked through it, I saw AT&T Park way off in the distance:

Neal and I had arrived 15 minutes early, so we hung out next to the studio. Here I am waiting to go on the air:

I was interviewed live on a show called “The Rise Guys” on 95.7 FM The Game. Here’s a photo that Neal took during the interview:

It lasted for about 10 minutes, and the three hosts — Whitey Gleason, Mark Kreidler, and Dan Dibley — were great. I expected them to diss me relentlessly (because that’s the nature of morning radio), but they treated me with respect and still managed to keep things light and funny. Click here to listen to it.

From there, Neal and I grabbed a quick bite to eat at a nearby coffee shop, and whaddaya know? There happened to be newspaper box right outside with free copies of The San Francisco Examiner. Remember this article about me that was published online the day before? Well, I grabbed a copy of the print version . . . 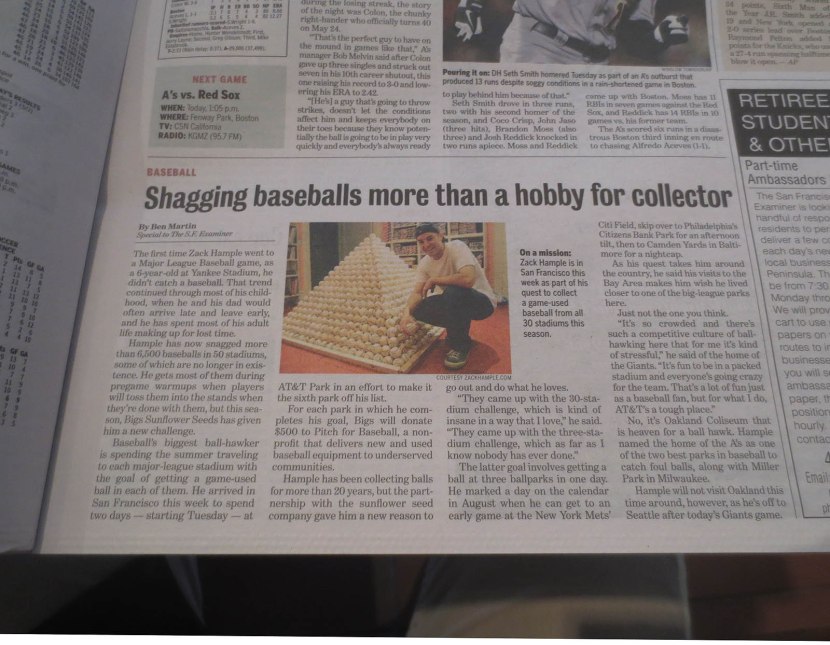 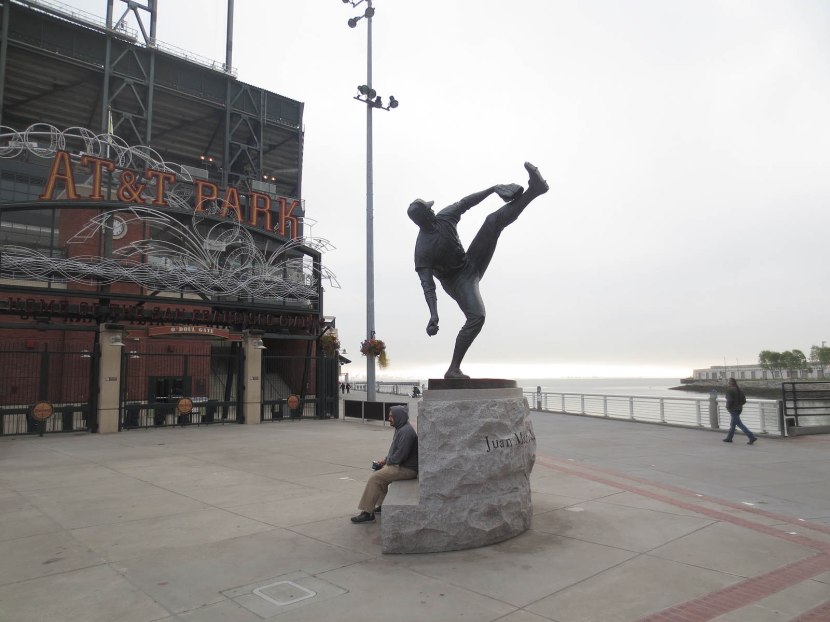 . . . and as I tweeted at the time, it was the earliest (7:45am) that I’d ever been at a major league stadium. We were there because I had two live TV interviews scheduled in the eight and nine o’clock hours on Good Day Sacramento.

Before I went on the air, this guy was interviewed, and I was concerned that his act would be tough to follow. Check it out:

In the photo above, that’s not just any old bike you’re looking at. It’s a “pianobike,” and yes, the guy in the white hat was riding and playing at the same time. His name is Gary, and he let me take a photo of his pianobike up close:

There was plenty of time to spare before my first segment, so I goofed around with the host:

His name is Cody Stark, and in case you’re wondering, that was *his* (yucky) baseball. He and I had corresponded several years ago, but this was the first time that we met in person.

We still had more time to kill, so I sat on a gigantic concrete baseball and read some box scores: 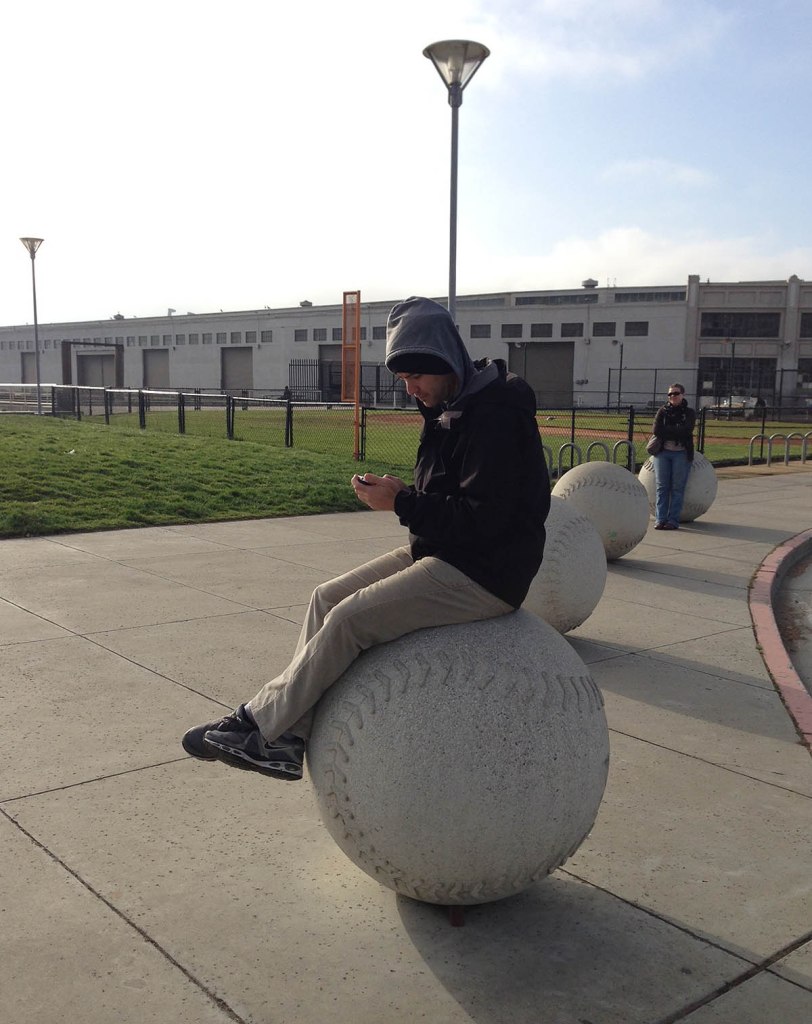 Finally, at around 8:45am, it was time for my first interview. It was still cold — probably in the 50s — but I took off my hoodie and jacket and ski cap so that the world (or at least Sacramento) could see my BIGS gear. And then, suddenly, I was on live TV: 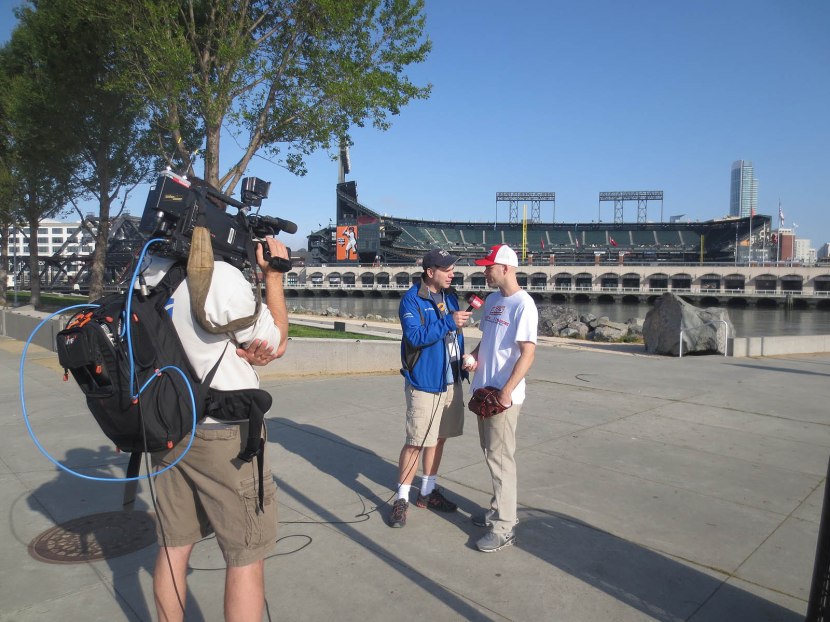 Neal did a solid job of documenting everything. Here’s another shot he took during the interview: 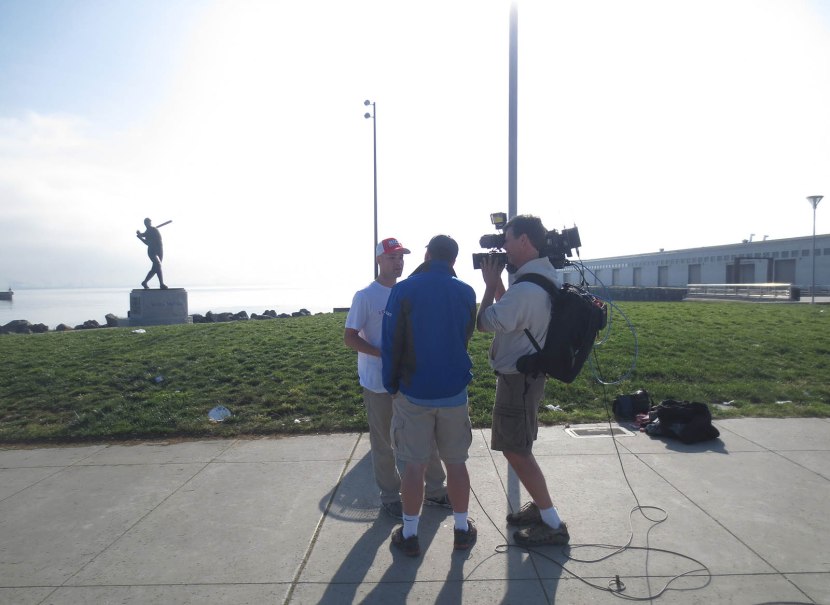 In addition to the two segments, Cody and I filmed a bunch of teasers, and by 9:15am we were done. I was absolutely exhausted, but I held it together for one final photo with him and some seeds: 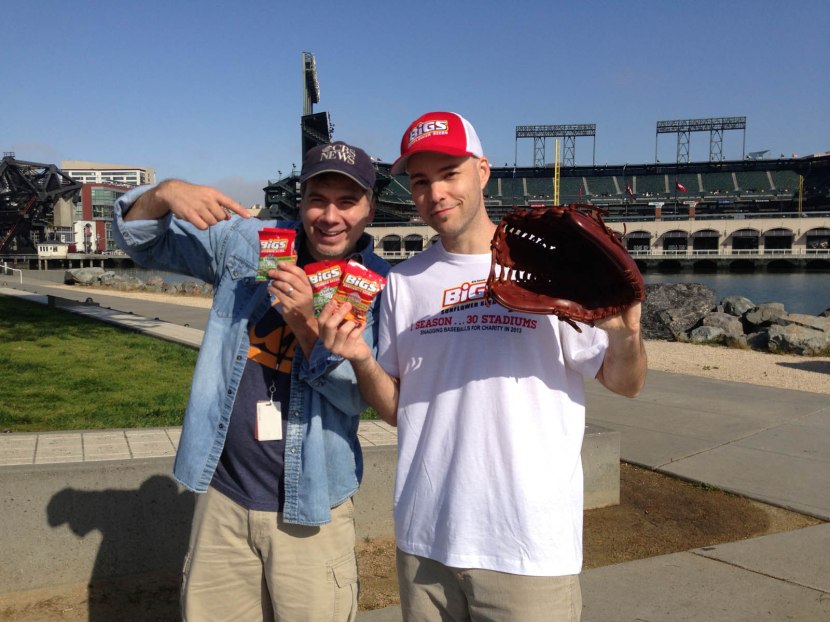 Cody actually loves sunflower seeds and had requested that I bring some for him; in one of our teasers, we both had a mouthful, and we were eating them and spitting the shells. Fun stuff.

Here’s a screen shot from one of the segments: 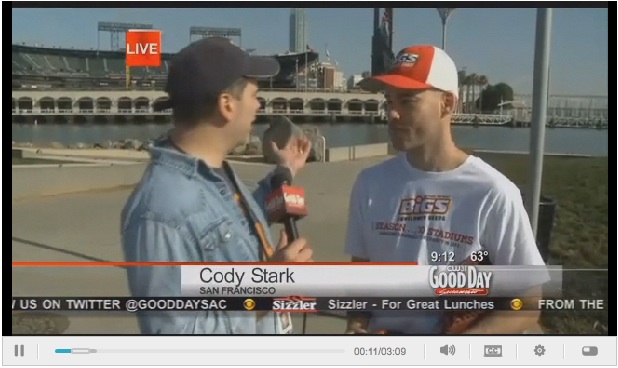 Neal and I took a cab back to the hotel. All I wanted to do was take a nap (for about a week and a half), but instead I fired off a few urgent emails and gathered my stuff and took another cab back to the stadium:

Before the gates opened, I caught up with this guy on the portwalk:

His name is Joe Dirt, and he’s there EVERY day. He’s famous for fishing home run balls out of McCovey Cove. He’s gotten more than two dozen gamers over the years, including Brandon Belt’s 9th-inning homer the day before.

Eight minutes before the “Marina” gate opened, this was the scene:

As you can see, there wasn’t much of a crowd — but it didn’t make a difference because there was no batting practice. When I first ran inside, the only action consisted of several Giants pitchers playing catch along the left field foul line: 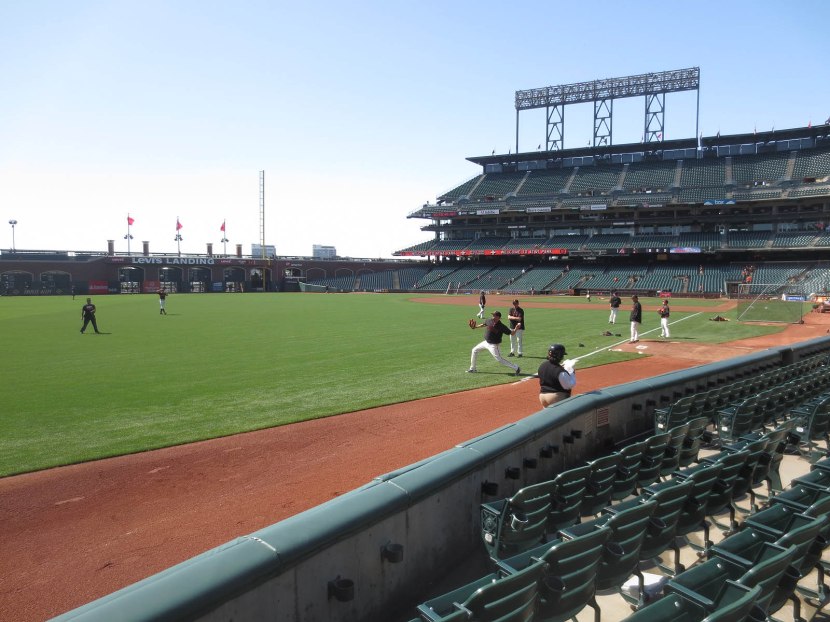 Two minutes later, Javier Lopez threw me a ball, and get a load of this — I took a photo as it was flying toward me: 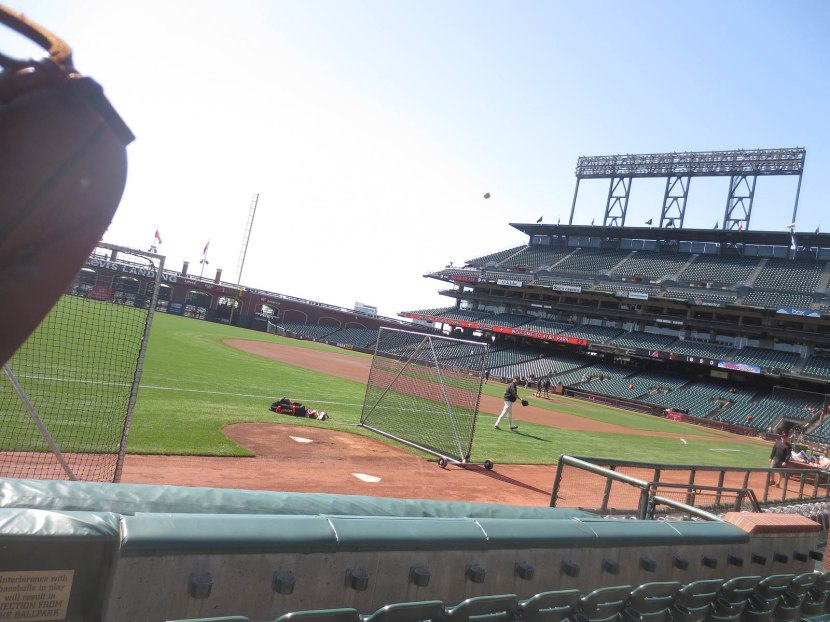 Once the Giants were gone, I headed to the right field corner where two Diamondbacks players were running:

It turned out to be Matt Reynolds and Heath Bell . . . 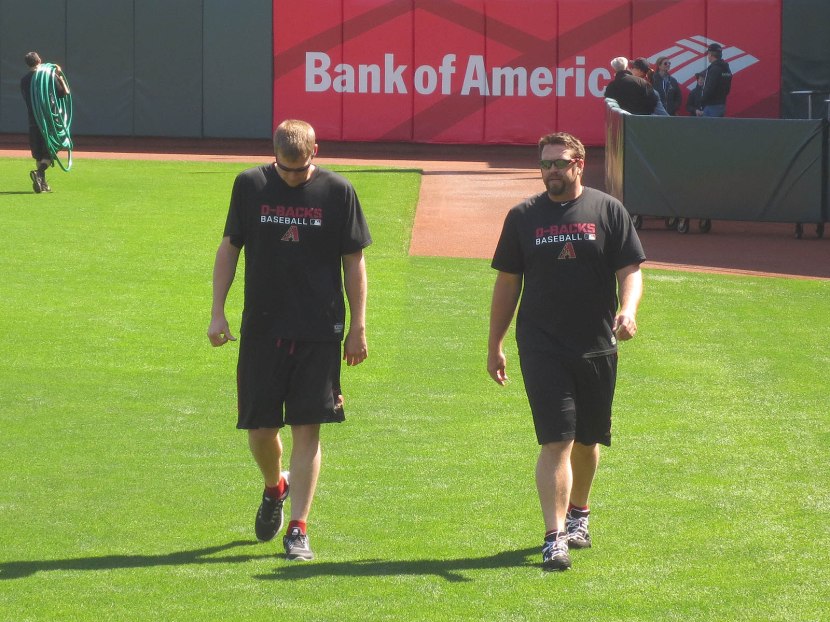 . . . and when they finished, Heath came over to say hello:

The previous photo was taken by one of those annoying fan-photographer people, but in this case, hell, it turned out to be a good thing. That photo is actually a screen shot of a thumbnail on the Giants’ website, which I expanded in Photoshop — a bit pixelated, but whatever.

Heath and I talked about all kinds of stuff for ten minutes — chewing tobacco, drinking (or lack thereof) in the clubhouse, charging the mound, Zack Greinke vs. Carlos Quentin, Heath’s contract, the Mets’ payroll, Omar Minaya, PETCO Park, Jose Reyes’s injury, and more. It was fascinating. I *love* that guy. 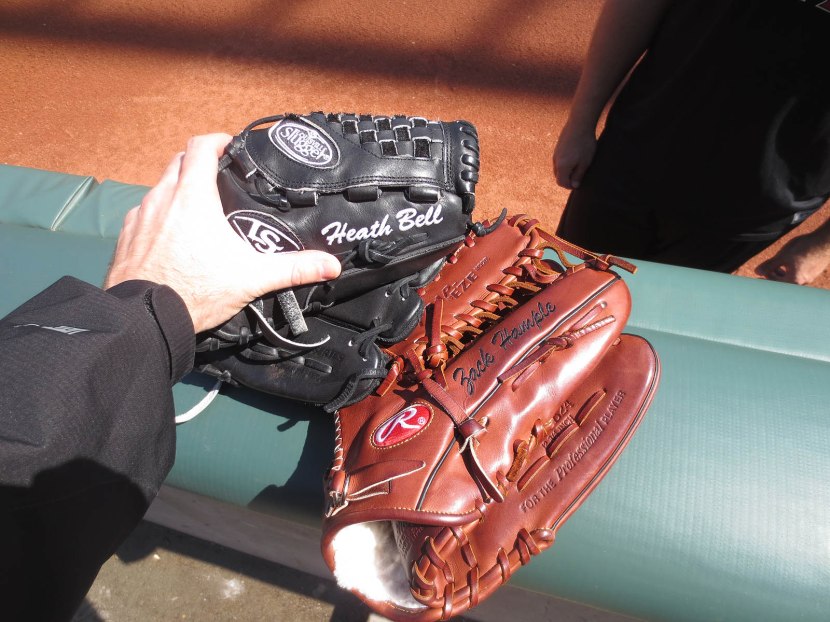 The D’backs ended up taking infield practice, which was fun to watch. What wasn’t fun was when the coaches walked in with a bag of balls . . .

. . . and completely ignored me. Not only was I the only fan in the fancy/restricted seats behind the dugout, but I was decked out in red Diamondbacks gear and had asked them politely. I was shocked that they didn’t hook me up. Alan Trammell? Not a friendly man.

While I was down there, the friendly usher told me that my ticket entitled me to go anywhere in the stadium except the luxury suites.

“You mean I can go check out the club level?” I asked.

Therefore, after grabbing some food and photographing a skinny Brandon McCarthy signing autographs . . .

. . . I headed up to the “Virgin America Club Level” via this escalator: 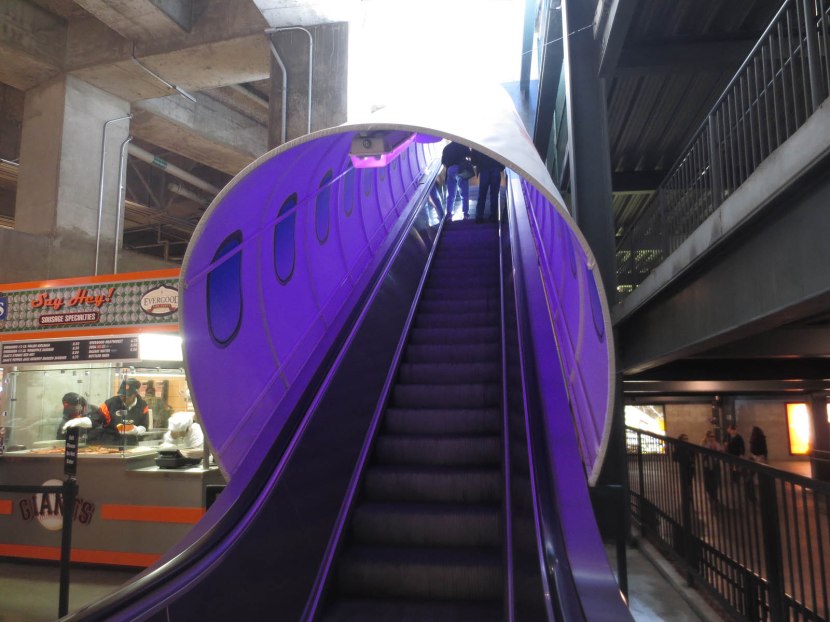 At the top of the escalator, I headed through these doors . . .

. . . and found myself in a nice-but-generic concourse:

The floor was shiny, but so what? Airports and shopping malls also have shiny floors.

There were airplane logos all over the place . . .

. . . which was annoying, but okay, fine, I’ll stop complaining. Here’s something that I thought was pretty cool. While standing in this spot . . .

. . . I could look directly into the press level on my left: 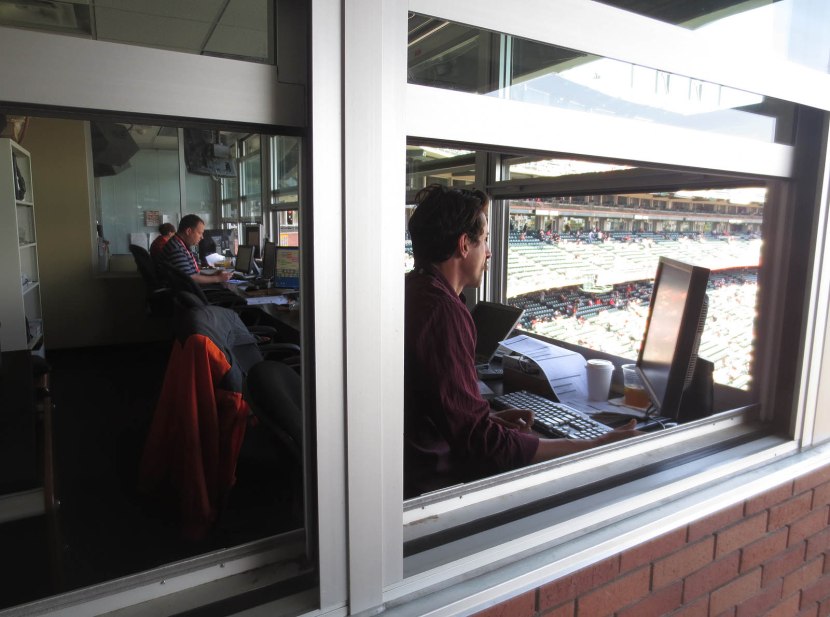 Another nice thing (from a ballhawking perspective) is that there’s a cross-aisle between the seats and press box:

That said, it’s not a great spot for foul balls because it’s narrow, and of course fans aren’t allowed to stand there.

Shortly before game time, I headed back down to the regular seats along the right field foul line:

Several D’backs were playing catch, and I ended up getting a ball from bullpen catcher Mark Reed. I handed that ball to a little girl with a glove (and gave her entire family some BIGS Sunflower Seeds), and then I headed out to the left field bleachers. This was my view: 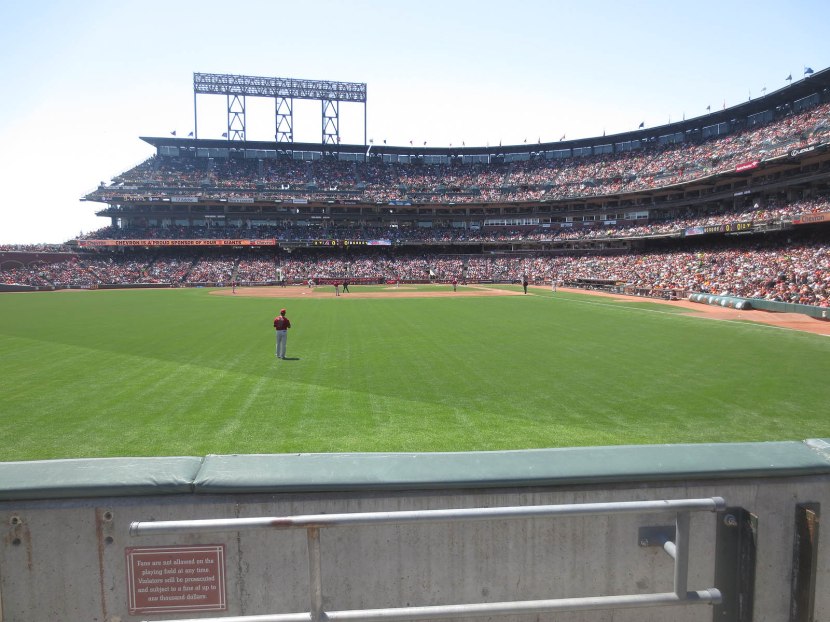 I was in heaven. (I even made friends with the folks sitting near me by handing out more packs of seeds — the Vlasic Pickle and Buffalo Wing flavors, to be specific.) Look how much room I had to run:

Unfortunately, but not surprisingly, the rightful owners came for their seats, and I had to move.

One good thing about AT&T Park is that the Giants are really good, and the stadium is packed, and the atmosphere is lively; this was a weekday game in April, and I felt more energy in the building than I did last year at Yankee Stadium during Game 5 of the ALDS. The bad part about all of this is that there were *NO* empty seats in the outfield. I tried floating from spot to spot, but the people either returned to their seats or the ushers kicked me out. It was frustrating as hell, but hey, that’s just how it goes sometimes. I stood here for a little while . . .

I headed out to the Arcade in right field, but the view was crappy: 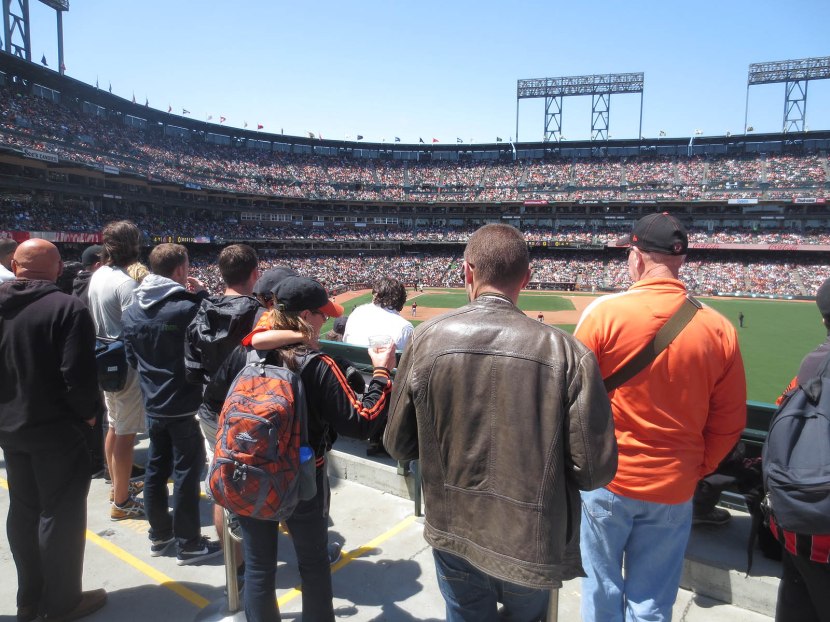 In addition to that, the walkway was too crowded to run for home run balls . . .

. . . and most of the batters in the game were right-handed, so I gave up out there. Before I left, I took a photo of the scene behind me: 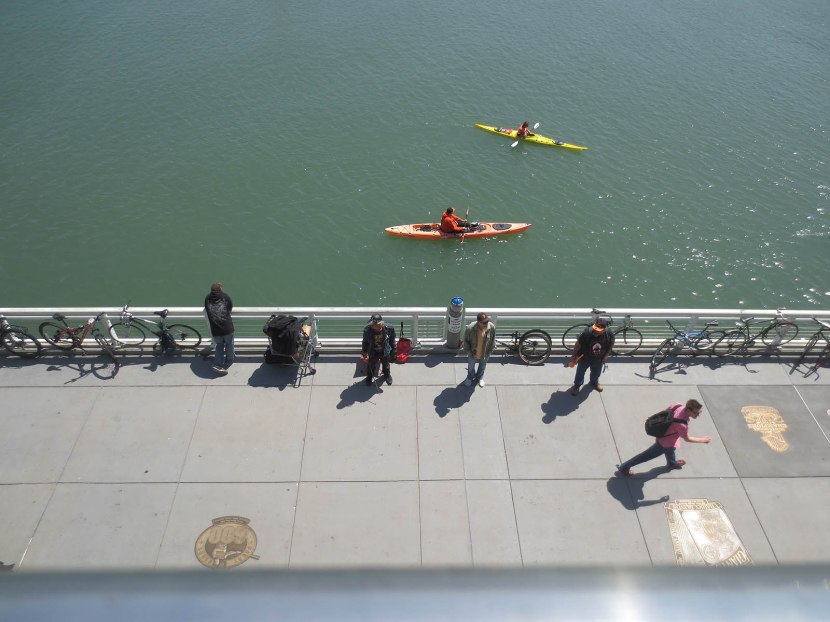 I know I’ve already posted a photo of the Marina Gate, but I have to share another because it’s so damn beautiful:

Lots of fans headed for the exits as the game dragged on, but it seemed that the bleacher crowd didn’t thin out at all. Meanwhile, I was so tired that my eyes hurt, and I just couldn’t deal with the hustle of eluding the ushers . . . so I headed back up to the club level. I spent a few minutes looking at the cases of memorabilia in the carpeted (Ooh! Wow!) concourse behind home plate including signed baseballs . . . 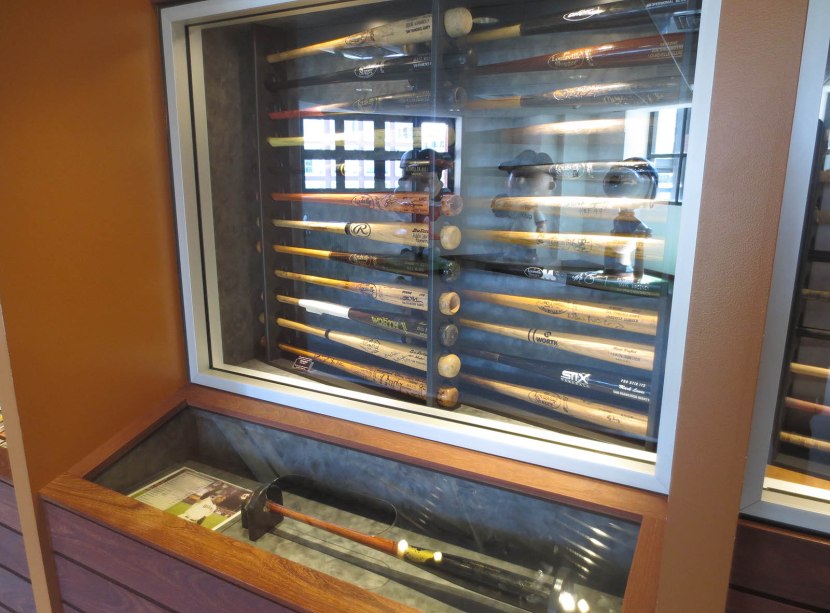 As I’ve said before, I’m not the museum type, but I did enjoy *briefly* looking at all that stuff. Then I grabbed a seat here in the shade . . .

. . . in the hope that a right-handed batter would hit me a foul ball. Nothing came close, and I ended up moving back down to the dugout . . . 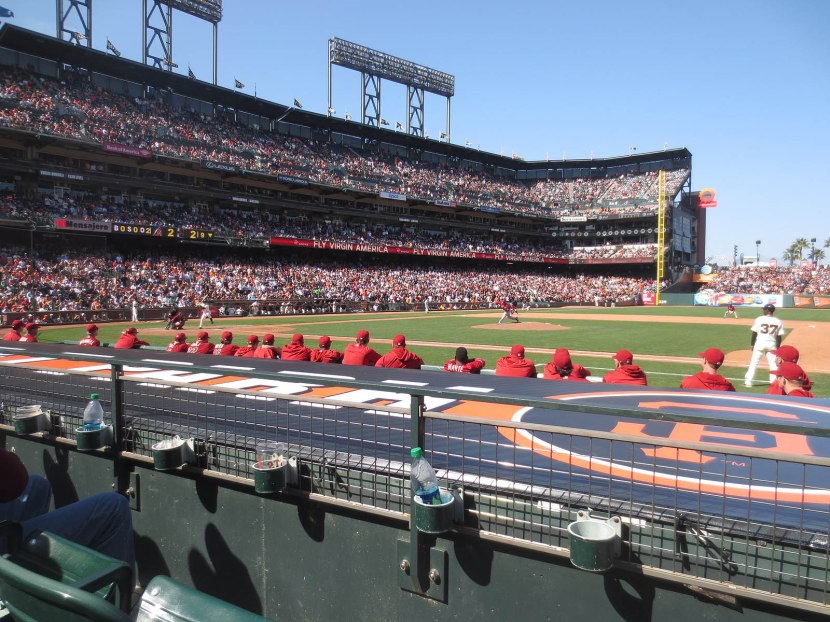 . . . for the final three outs. Final score in 10 innings: Diamondbacks 3, Giants 2. And let me point out the fact that my man Heath Bell pitched a scoreless inning to lower his ERA to a respectable 4.50. (Remember, he’s still recovering from a dreadful first outing in which he surrendered two homers and three runs in a third of an inning.) Also, his 14-to-1 strikeout-to-walk ratio isn’t so bad.

Despite all the fans who’d left early, the exit ramps were still packed:

When I finally made it outside, I took a photo of the one ball that I’d kept . . .

• 884 consecutive games with at least one ball

• 23 donors for my fundraiser

• $102.06 raised this season through my fundraiser

• $3,000 from BIGS Sunflower Seeds for my game-used baseballs