This was my final game of a five-city road trip, and it was the only time that I ever made it to Old Busch Stadium. 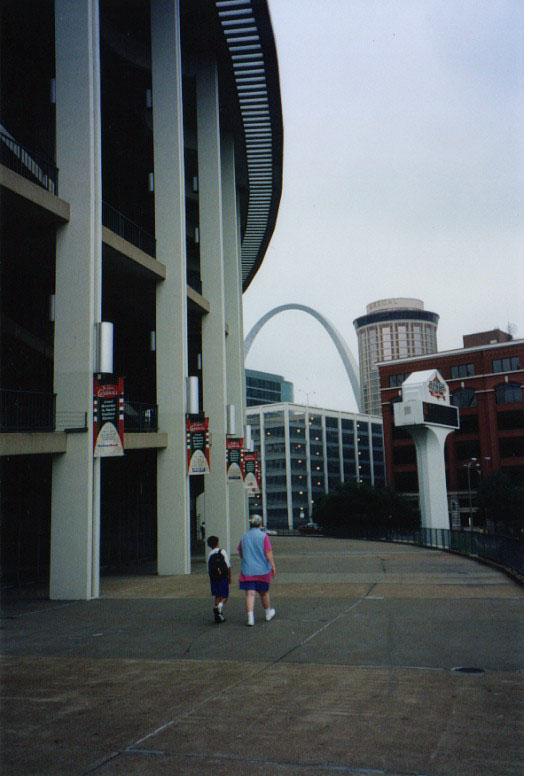 . . . and there were already several fans waiting to get inside. Why? Because it was mid-July and Mark McGwire had already hit 40 home runs. The whole country was OBSESSED with his pursuit of Roger Maris’s single-season record; here in St. Louis, people were going absolutely insane. They wanted his autograph. They wanted to take pictures of him. They wanted to see him take batting practice. Anything.

Given the fact that the weather had been iffy all day, I was ecstatic when I peeked through one of the gates and saw this: 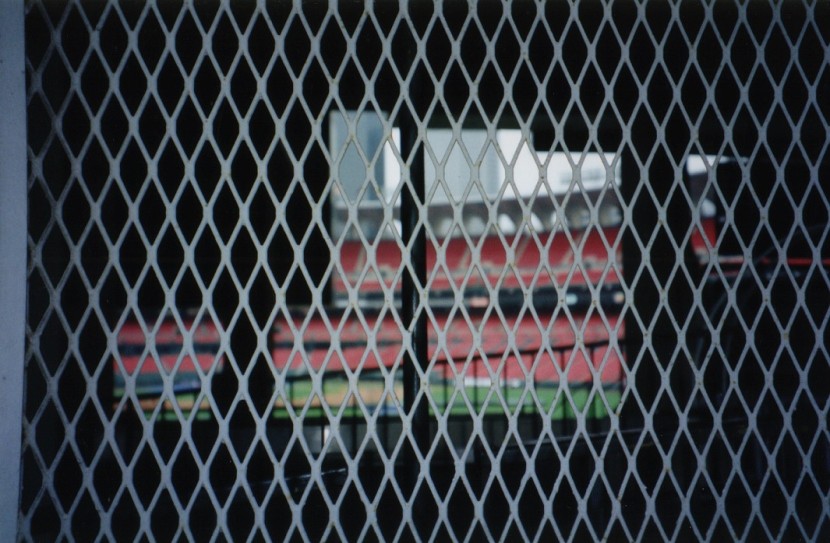 The tarp was NOT covering the infield!
There WAS going be batting practice!

By 5pm the line to get in was several hundred feet long. Ten minutes later, when the gates finally opened, I bolted out to the left field seats. No good. I could tell right away that I needed to move, so I rushed to the right field side and worked the balconies that were positioned roughly 15 feet above the warning track.

My first ball of the day was tossed by a groundskeeper. My second ball was thrown by Cardinals pitcher Donovan Osborne. I snagged my third and fourth balls with the glove trick, at one point maneuvering around a cop who was in my way and stubbornly refused to step aside. Toward the end of BP, when I attempted to use the trick yet again, Reds outfielder Melvin Nieves helped me by grabbing the ball and stuffing it into my glove. After BP I got my sixth ball tossed by an unknown player at the Cardinals’ dugout on the 1st base side.

Then I wandered all over the place and took a bunch of photos. Here’s one that shows the not-yet-chalked 3rd base line: 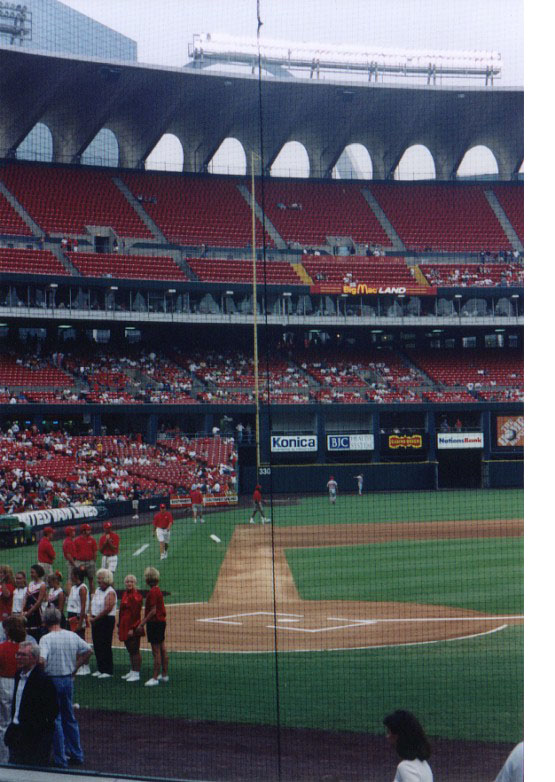 I moved one section to the right and got someone to take my picture: 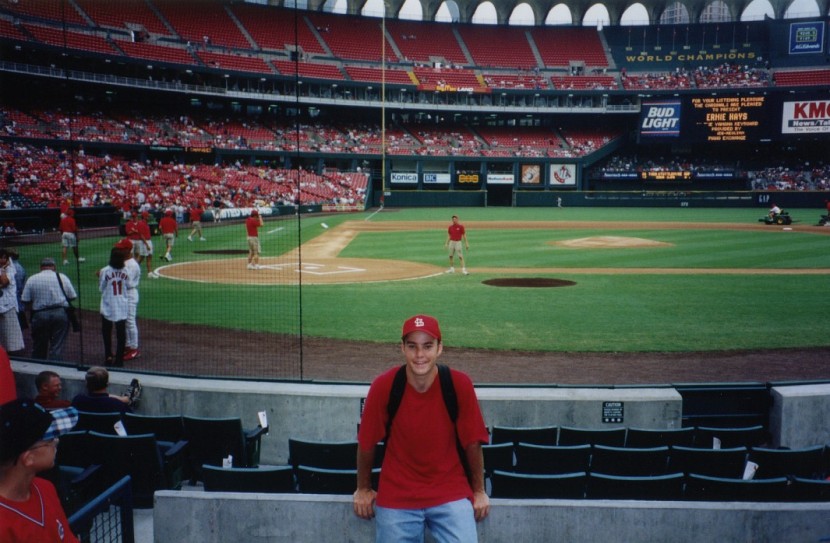 Here’s a look at the crowd on the 1st base side: 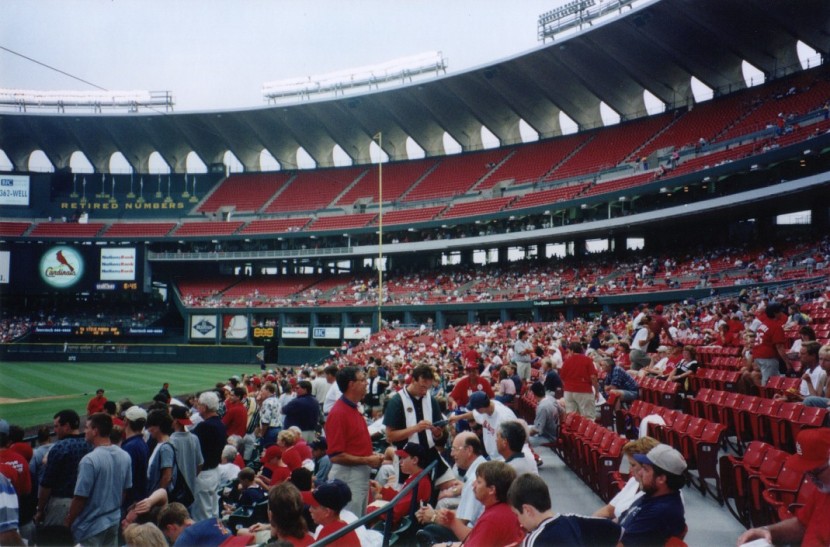 Just before the game started, I got my seventh ball at the Cardinals’ dugout from John Mabry. Then I headed to the upper deck and took two photos. Here’s one . . . 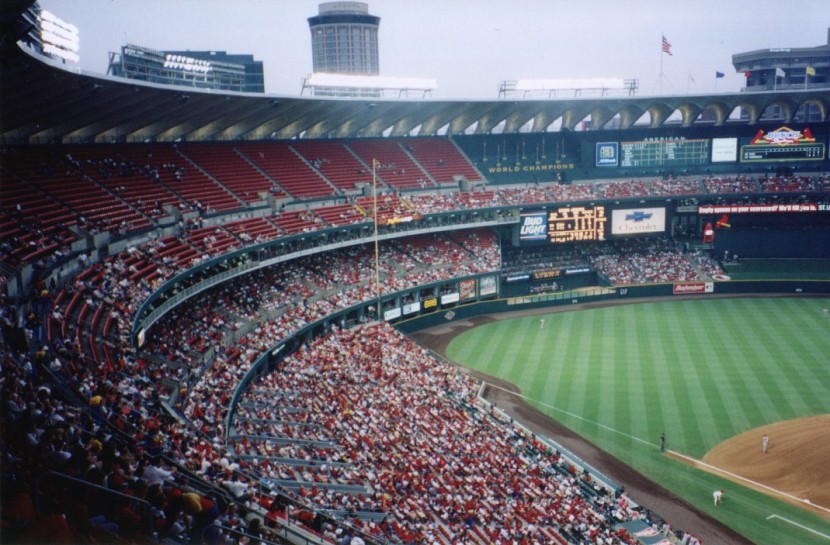 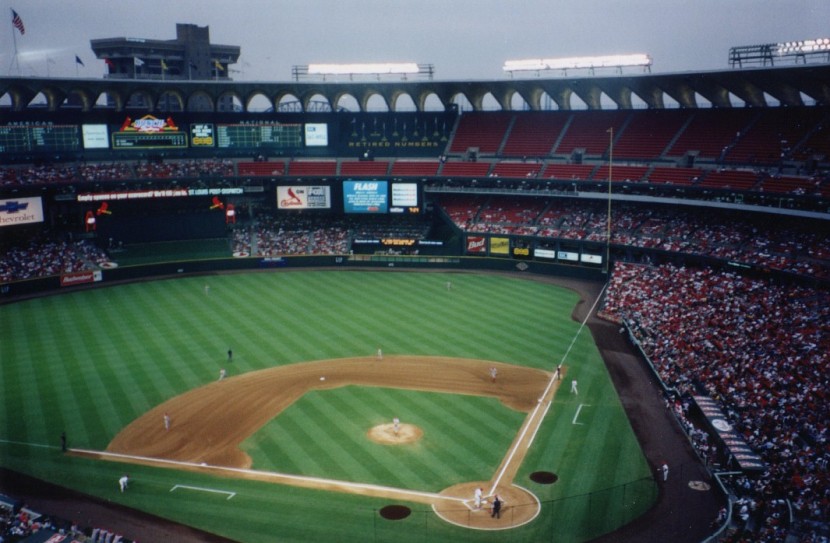 . . . and look! They can kinda almost be combined to make a nifty little panorama: 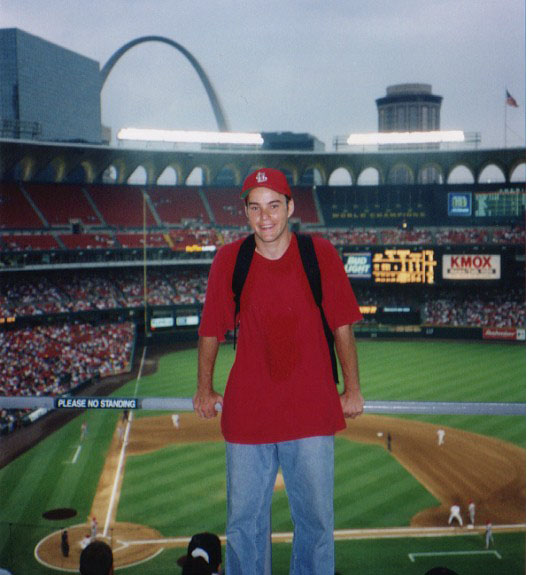 . . . standing next to the “PLEASE NO STANDING” sign. At the tender age of 20, this was my idea of being rebellious.

By the 2nd inning, I made it back down to the field level seats. Remember those balconies where I snagged all my baseballs during BP? Here’s what they looked like: 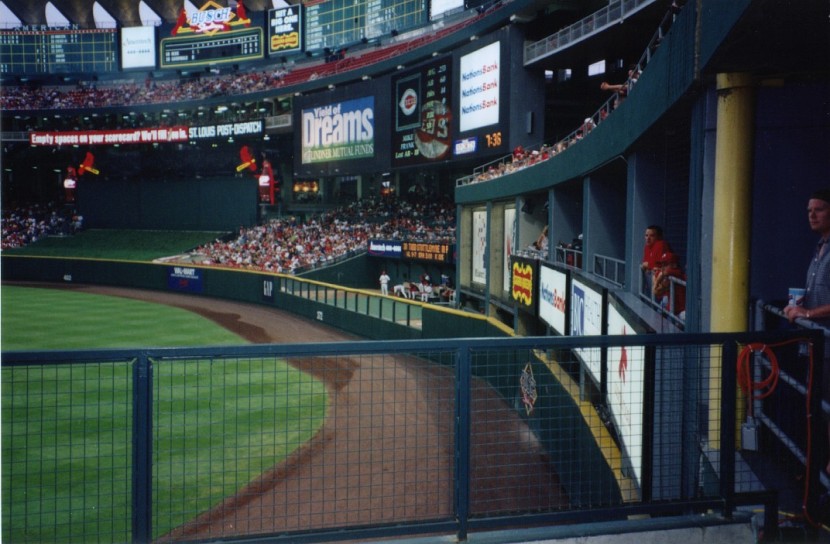 This was the view from one of the balconies: 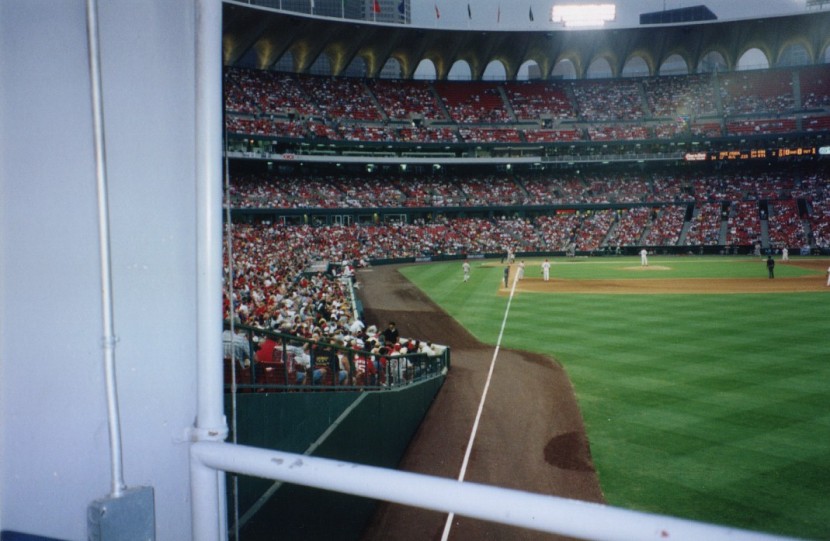 (Two and a half months later, Mark McGwire’s 70th and final home run ball of the season landed in one of the left field balconies, which was being rented out as a private party room. That ball was snagged by a fan named Phil Ozersky and was later purchased at auction by Todd McFarlane for $3,005,000. There’s an entire book about that ball and the crazy aftermath, which I *highly* recommend.)

Late in the game, I headed through this tunnel . . . 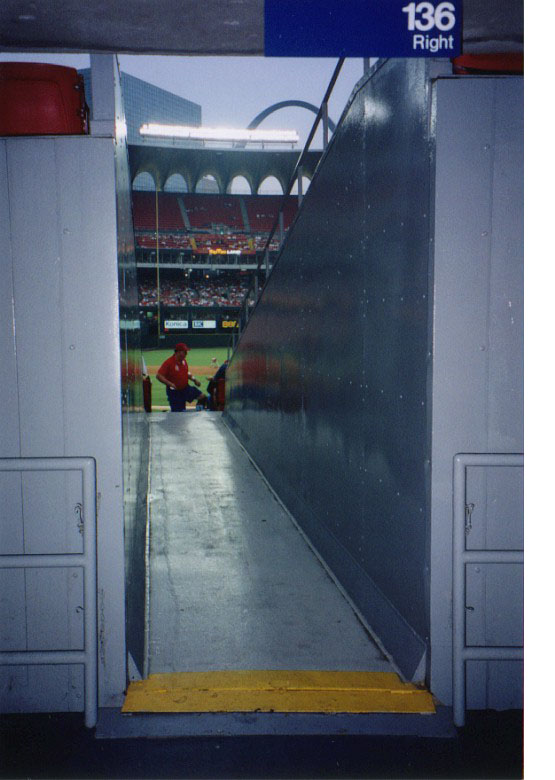 . . . to the seats behind the Cardinals’ dugout. Old Busch Stadium was a tough place to snag baseballs, but it sure was pretty, or at least dramatic-looking, don’t you think? Take another look at the previous photo. I loved all those mini-arches at the top of the upper deck, and when I saw THE arch looming up in the background . . . wow. Just as I felt with all the other stadiums that I visited on this trip, I was thrilled to be here.

I took one final action shot late in the game . . . 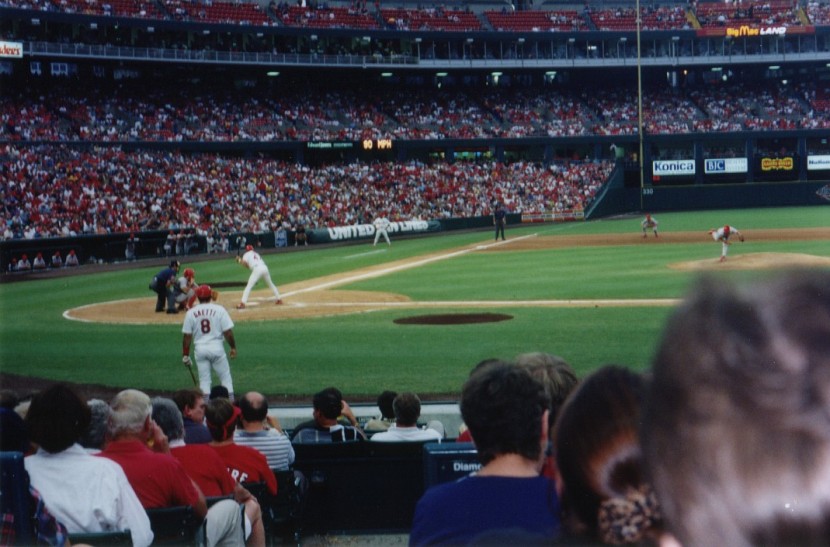 . . . and that was it. The Reds beat the Cardinals, 7-4, and guess who went deep. That’s right: Dmitri Young, Eddie Taubensee, Ron Gant, and Gary Gaetti. McGwire only had one at-bat;  he pinch hit in the bottom of the 9th and grounded out. (Interesting side note about McGwire’s pursuit of the record: it totally screwed up business for local taxi drivers. Under normal circumstances, fans start trickling out in the 6th or 7th innings, so drivers start picking up passengers early and return to the stadium to get more and more. Each inning can be good for an additional fare, but because NO ONE wanted to miss any of McGwire’s at-bats, everyone stayed ’til the final out, and drivers often had just one passenger per game.)

Way back in 1998, I didn’t give any of my baseballs away; I kept every single one, so when I returned from my trip, I photographed my haul: 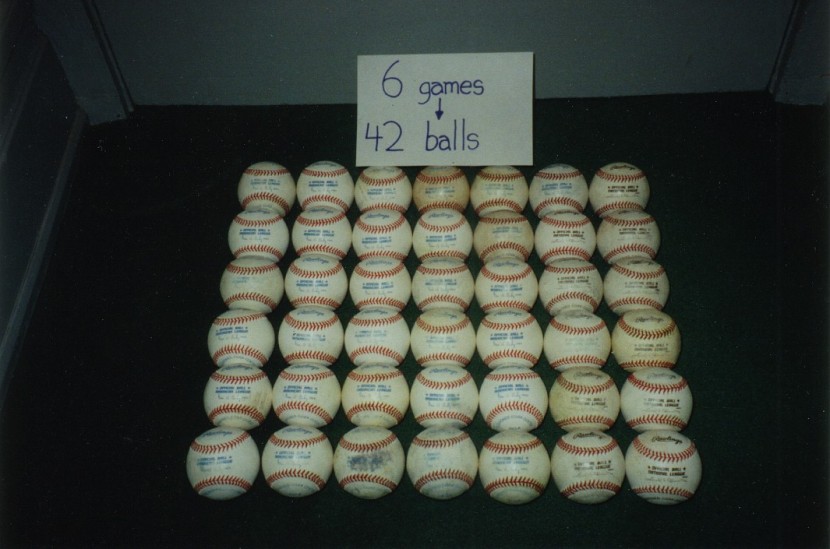 Ahh yes, the good ol’ days when each league had its own ball. (Click here to see a closeup of a National League ball, and click here for the American League version.)

Now, here are the different types of ticket stubs that I collected at Busch. We’ll start with six of these . . . 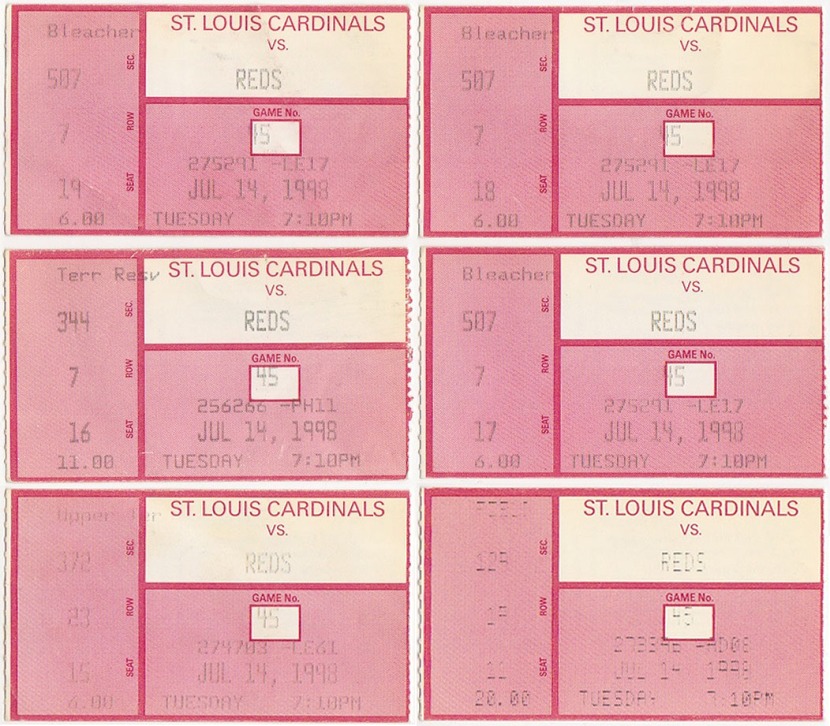 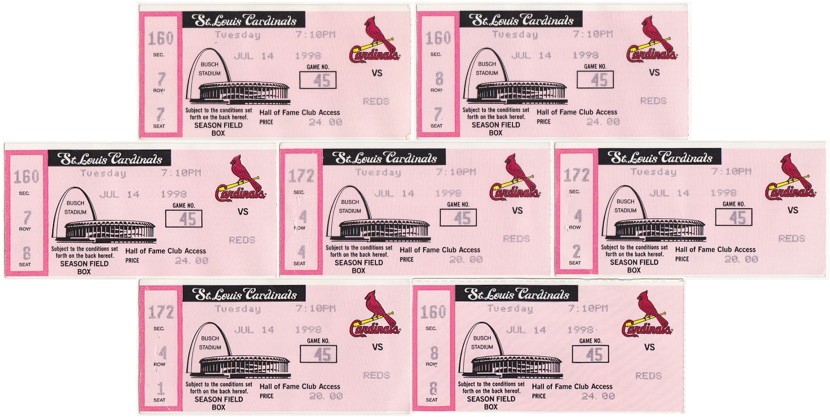 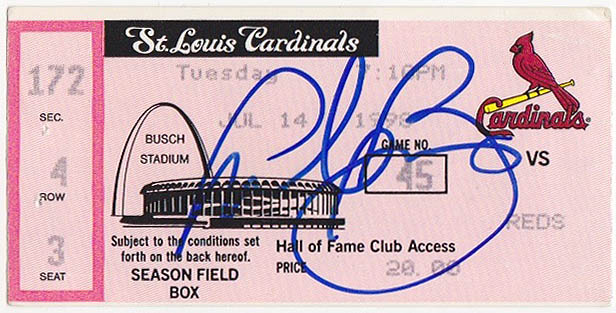 I also got three of these: 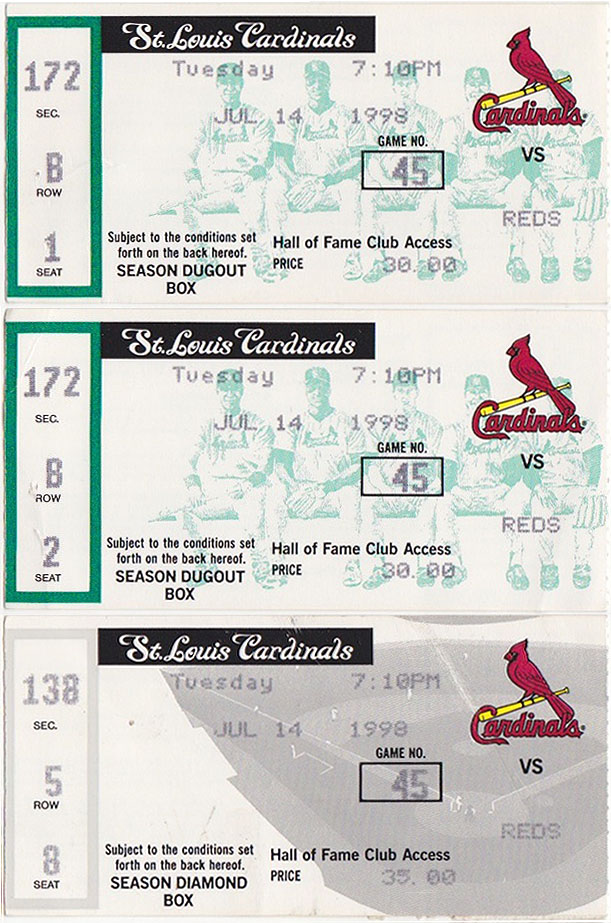 Ready for my original journal entry about my experience in St. Louis? It’s a good one: 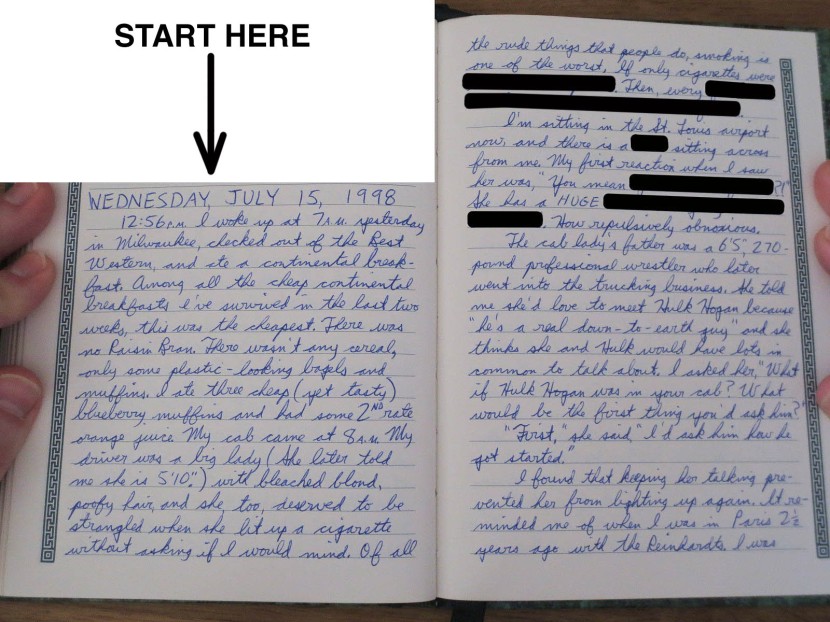 Words alone can not describe how much I hate cigarettes. 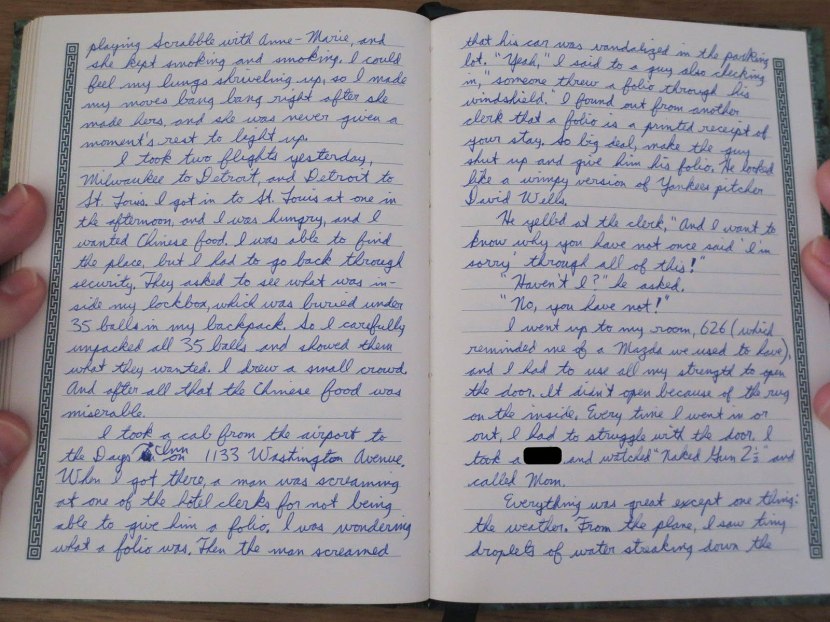 Hey, look, a double-page without ANY words bleeped out: 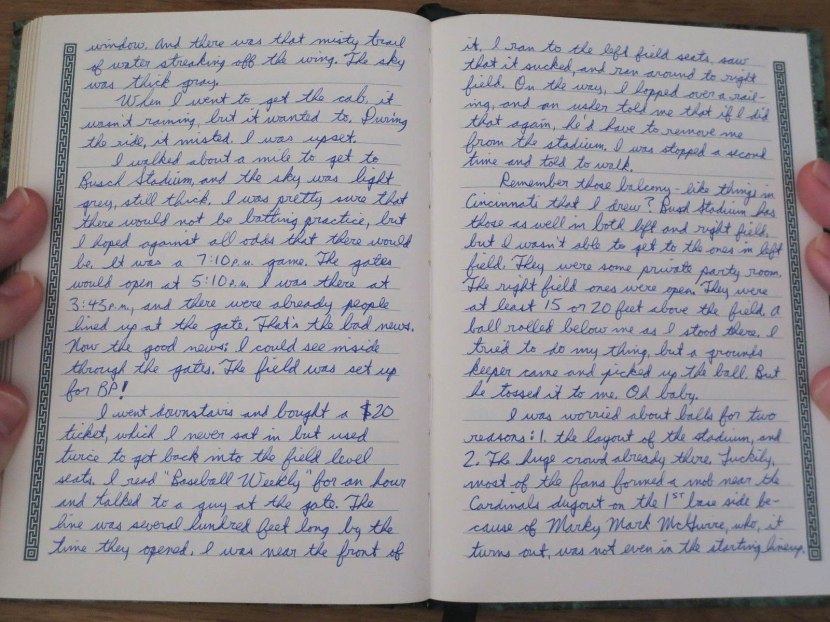 Here’s the part with the cop and my glove trick: 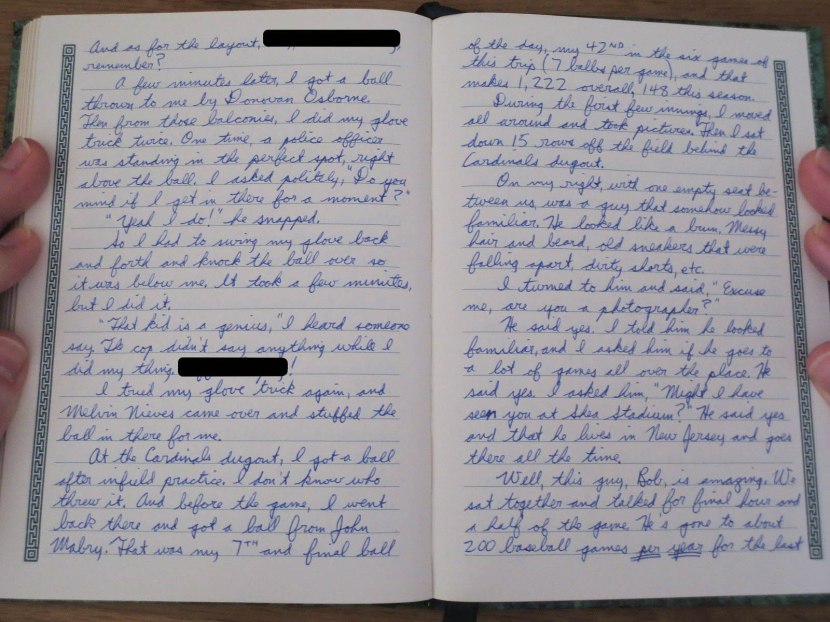 Here’s a story about an interesting fan I met, along with some details about McGwire’s at-bat: 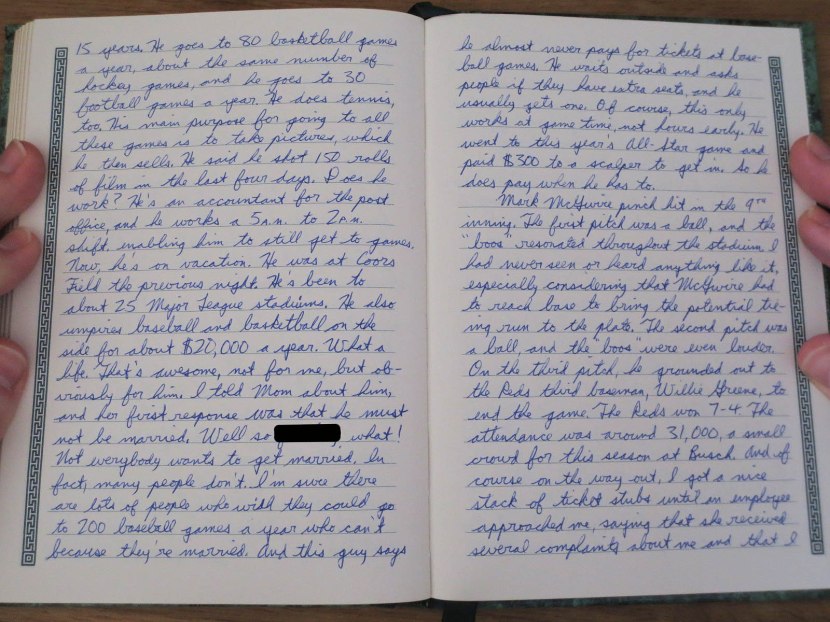 For the record, this was the only time that I ever had a problem while asking people for ticket stubs after games. I suspect there never was a complaint and that this random employee simply used that as an excuse to get me to leave. 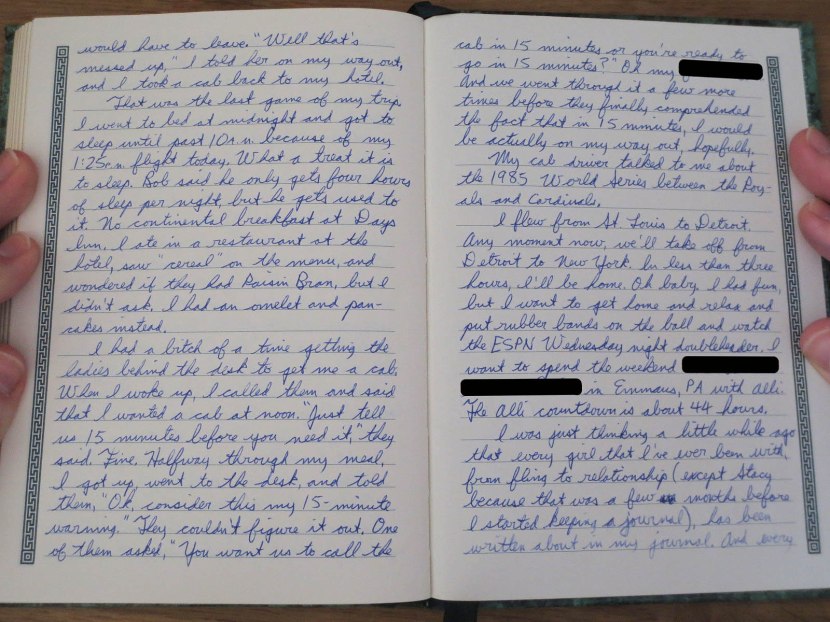 The last page of this particular journal — Volume 38 of 120 — has nothing to do with baseball, but I decided to include it in this blog entry . . . just because. Enjoy: 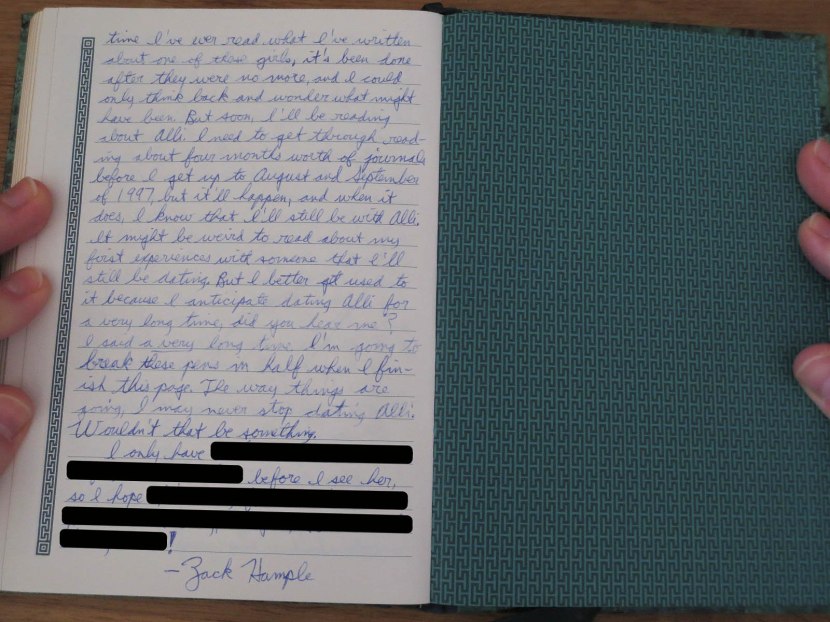