I wish I could say that I visited Riverfront Stadium, but by the time I made it there in 1998, its name had unfortunately changed to Cinergy Field. I’m glad to report, all these years later, that I started the day in style. Check out the car that I rode to the airport: 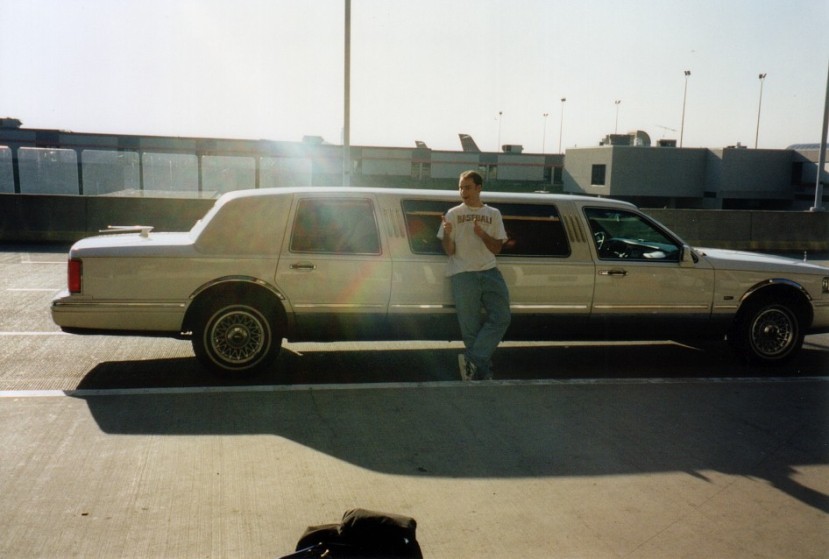 First of all, yes, that’s me in the previous photo, age 20, and secondly, no, I didn’t pay for a stretch limo. I’d reserved a taxi through a company that also had limos; they happened to run out of taxis at the last minute, so they picked me up in that PimpMobile instead. And yes, when I arrived at the airport, I asked the driver to take a photo of me, and I posed like a complete tool.

I headed to the stadium so early that there was truly no one else around:

It was the perfect time of day to attempt to sneak inside — something I often tried to do in other cities before 9/11. Nowadays stadium security is insane, but 15 years ago (for those of you who are too young to remember, or hell, hadn’t even been born), everything was much more laid-back. If you arrived three or four hours before game time and walked around the perimeter of any major league stadium and checked every gate and doorknob . . . more often than not, you’d find one that was unlocked. And unguarded. When I visited Tropicana Field in 2000, I snuck in early by walking toward the employee entrance with a bunch of vendors — and confidently giving a wave to the absent-minded security guard. Anything was possible, and I never felt guilty. Wanna know why? Because I *always* bought a ticket for the game. The purpose of sneaking in wasn’t free admission; it was to get a sneak-peek inside the stadium — to get a behind-the-scenes look at the players warming up, to scope out the best places to catch baseballs, and occasionally to snag one if the opportunity arose.

Anyway, by the time I bought my ticket and started wandering around Cinergy, I ran into a bunch of high school kids who were thinking along the same lines. Game time was 7:05pm, and the gates weren’t going to open until 5:35pm — totally unacceptable. I got into talking with these kids, and they showed me that one of the gates — you know, those big metal doors — was unlocked. They were able to reach underneath it and lift the prong from the concrete, but we didn’t sneak in. There were some employees nearby, and eventually a security guard noticed what was up and locked it. I kept wandering and discovered another unlocked gate in a more remote area . . . and I waltzed inside. Easy.

By this point, there wasn’t much time until the gates were going to open for real, but that didn’t matter. I was just glad to be inside the stadium for a few extra minutes. The whole sneaking-in thing was like a game, and I’d won this round.

I headed to the right field seats and took the following photo: 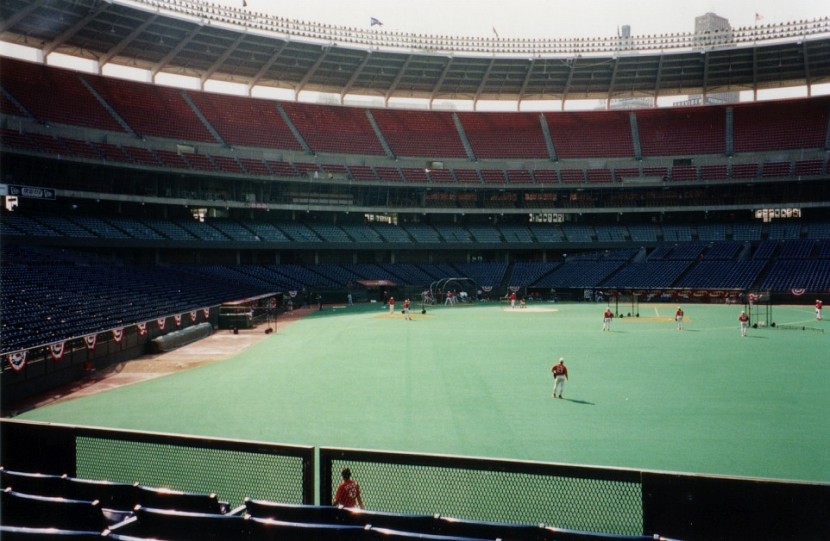 Never had such an ugly stadium looked so beautiful.

This was the view to my right: 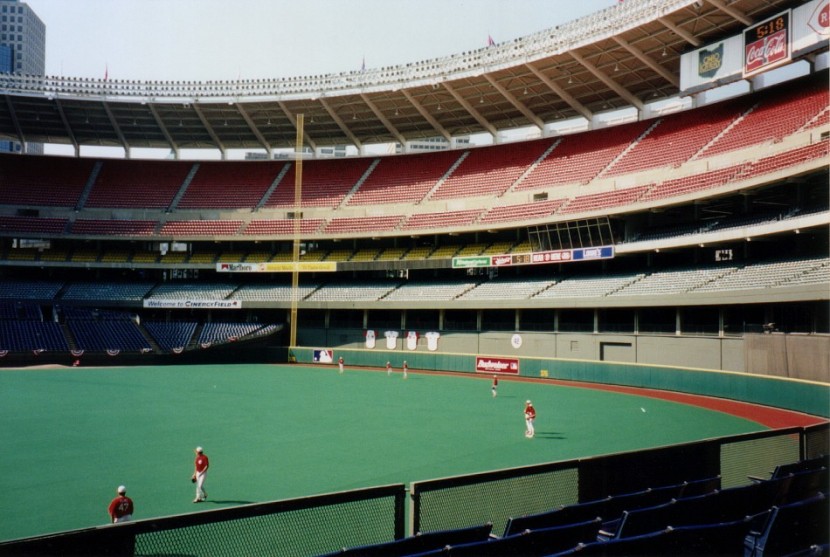 Did you notice the clock in the upper right corner of the previous photo? It was 5:18pm. I only stayed there for about 10 to 15 more minutes. That’s when the ushers started milling about, so I headed to the nearest bathroom and hid in a stall until 5:35pm. Then I bolted out with a whole lot of energy and a sense of relief. I figured it wouldn’t’ve been a big deal if I’d gotten caught. I would’ve pretended to be lost and showed my ticket for the game — and then what? Security would’ve walked me to the exit and told me to wait in line until the gates opened. Right?

My first ball of the day was thrown to me in right field by Twins pitcher Bob Tewksbury. My second ball was thrown by Eddie Guardado in the left field corner, and I snagged Ball No. 3 with the glove trick along the right field foul line. It was sitting on the field near the tarp, roughly eight feet out from the wall, so I had to knock it closer before I could work the real magic.

Throughout the day, I had mini-run-ins with several security guards and ushers — some telling me to slow down and others raising hell about the glove trick. What else is new? At one point, I came really close to using the trick from the 2nd deck in left field. There were several balls in the gap behind the outfield wall, and even though I was 30 to 40 feet high, I decided to go for it . . . that is, until security shut me down. While I was up there, two noteworthy things happened:

1) Twins outfielder Marty Cordova threw me my fourth ball of the day.
2) I banged the absolute crap out of my leg on a metal armrest. (It still hurts. Mentally.)

Toward the end of BP, I ran/limped back to right field and used the glove trick to snag two baseballs from the gap behind the wall. Here’s a photo that I took several minutes later, which shows the section where I did it:

Here’s another photo of the right field seats:

During the dead time between BP and the game, I wandered to the first base side . . . 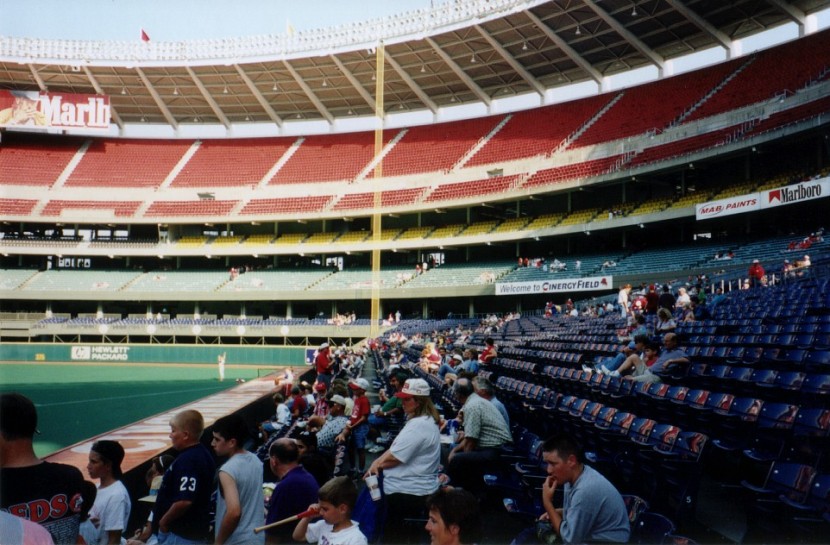 . . . and got someone to take a photo of me in the concourse:

Seriously, is this one of the ugliest/generic-est stadiums you’ve ever seen? It was the classic “cookie-cutter” ballpark, and you know what? I miss it. Cinergy was pretty much a clone of Three Rivers, which was pretty much a clone of Veterans, and so on. But now we have a whole nother crop of cookie-cutter stadiums; smallish outfield variations notwithstanding, Nationals Park is similar to Coors Field, which is similar to Citizens Bank Park. And so on.

Here are four Reds players stretching and getting loose:

From left to right in the photo above, you’re looking at Barry Larkin, Reggie Sanders, Eduardo Perez, and Pokey Reese.

Just before game time, I got Melvin Nieves to throw me a ball at the Reds’ dugout (by stalling an annoying usher who was trying to get me to leave and then asking for the ball in Spanish). That was my seventh and final ball of the day — No. 1,167 lifetime.

This was my view early in the game: 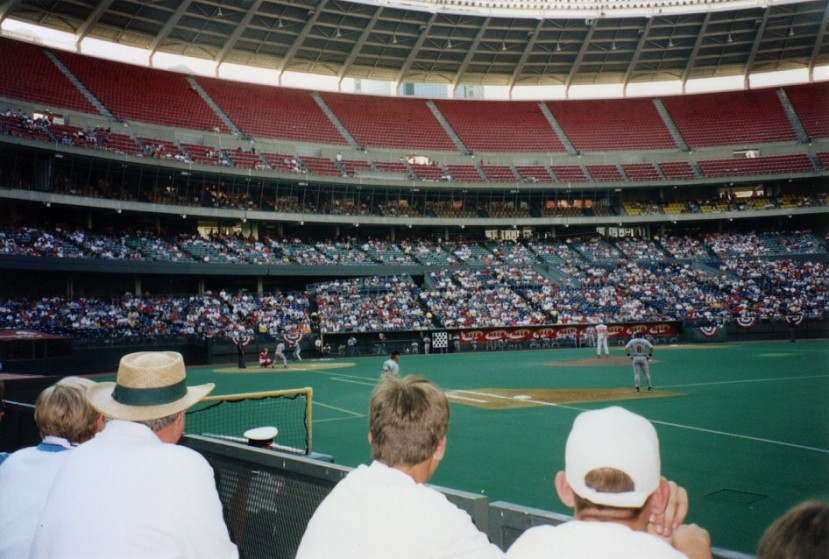 Here I am several innings later in the front row of the 2nd deck:

I suppose I should’ve been sitting in the outfield, trying to catch a home run instead of camping out behind the plate for a foul ball, but ucchh . . . most homers in that stadium landed in that stupid gap behind the outfield wall.

The Reds ended up winning the game, 8-7, on a walk-off single by Eddie Taubensee in the bottom of the 9th. On my way out, I collected twenty-nine ticket stubs! Here they all are (along with my own stub, which is mixed in there somewhere):

Now, in case you’ve missed it, I’ve recently been blogging about old games in defunct stadiums:

Finally, here’s my original handwritten journal entry about my experience at Cinergy Field:

In case you’re wondering, “Tiger and Shadow” were my cats — may their little pussy souls rest in peace.

As you’ll see later in the entry, I’ve bleeped out certain words and phrases. I nearly bleeped one on the right-hand page here . . .

. . . but didn’t because then you would’ve assumed that I’d written something far worse.

This is the part when I arrived at the stadium and started looking for ways to sneak in: 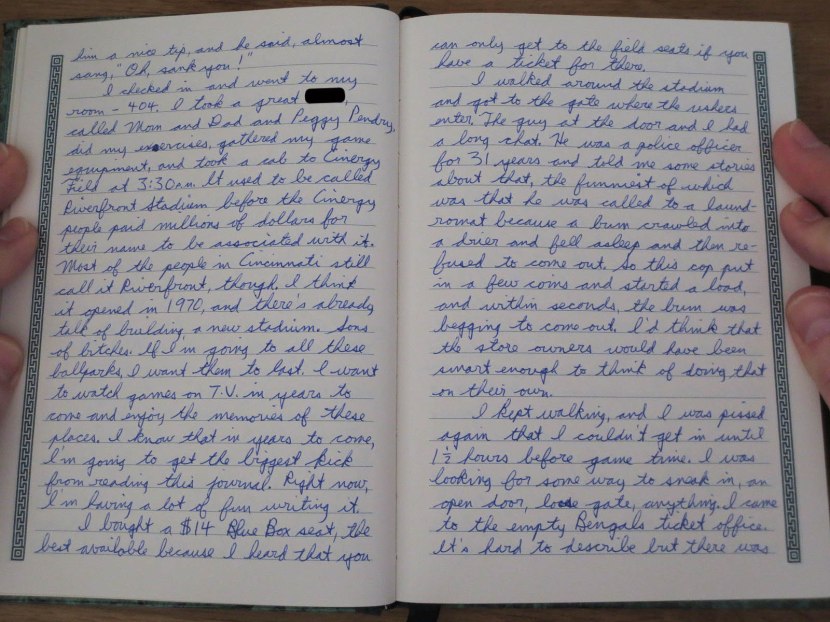 Here’s where I actually did the deed: 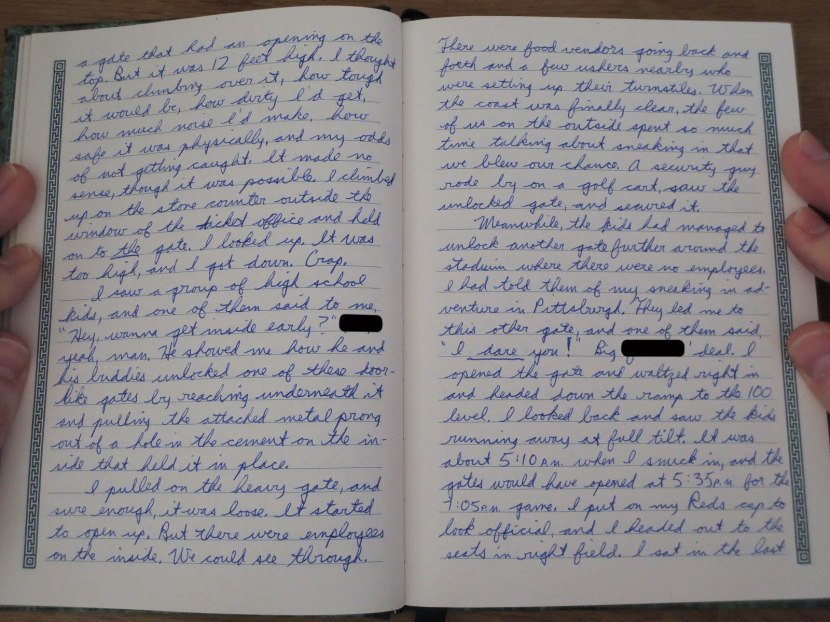 I talked some more about sneaking in . . .

. . . and look, here’s some bad-but-effective-so-therefore-not-actually-that-bad artwork:

Uh oh, we’ve got some serious bleepage going on here:

Are you still with me? Good. We’re almost done. The entry continues here . . .

As you may have noticed, I gave you a bonus paragraph from my following entry, but that’s all you get for now.