Over the past six weeks, I’ve blogged about games that I attended long ago at Shea Stadium, Tiger Stadium, the Kingdome, County Stadium, and Candlestick Park. Now I’m taking you back to Qualcomm (formerly known as “Jack Murphy”) Stadium in San Diego. I was there for two games in 2000, and I’ve decided to combine them into one entry . . .

The first game started with a dreadfully long walk from my hotel to the stadium. I would’ve taken a cab (or booked a different hotel) had I not been misled about the distance, but whatever. I got some free exercise and ended up taking a nice photograph of Qualcomm from afar: 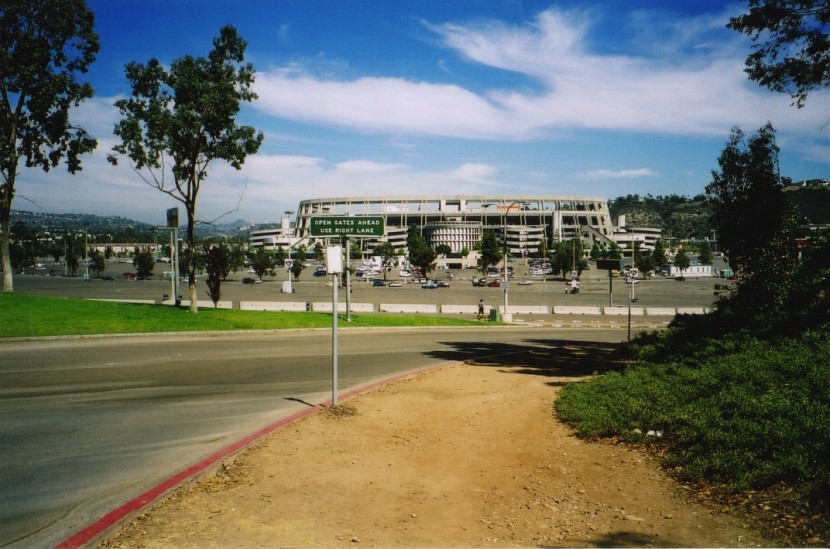 I wandered all around and took more photos like this . . .

Eventually I found myself at the Press Gate and struck up a conversation with a friendly security guard named Bruce. He asked where I was from and what brought me to San Diego, so I told him the whole story: I’d been flown out to Los Angeles several days earlier to appear on a game show called “To Tell The Truth“; rather than heading straight back to New York, I’d made the trip here to see a couple games at Qualcomm. He later introduced me to some season ticket holders who were hanging out with him, and we all chatted for a while. Here’s a photo of them:

One of the ladies asked me if I had a ticket for the game, and when I told her “not yet,” she handed one to me! Obviously I was thrilled to save some money — I’d only won $1,000 on the show and was gonna have to pay taxes on it — but I wasn’t sure if it was worth the hassle. You see, I felt obligated to sit with her, and yeah, she was perfectly nice, but ucchh . . . I ended up spending the first few innings with her when I *really* wanted to be exploring the stadium. By the time I was finally on my own, I didn’t feel like taking photos, and for some reason, I neglected to take any during batting practice. Therefore I can only describe the rest of my day, starting with a list of the BP balls that I snagged:

How’s THAT for a bunch of names you haven’t heard for a while (if ever)? Those six baseballs, by the way, increased my lifetime total to 1,639 — not bad for a college kid.

The best thing about the game was that Angels starter Brian Cooper got the win. I know what you’re thinking: Who the hell is Brian Cooper? Right? Well, in my world, Brian Cooper was a big deal because he’d pitched for the Boise Hawks in 1995, and I’d gotten to know him a little bit. That was the season I worked for the Hawks, so I rooted HARD for all the guys from that team who reached the majors. Jarrod Washburn was the biggest name who passed through Boise that summer. The only other guys who reached The Show were Trent Durrington and Justin Baughman. I was hoping to see Darin Erstad in Boise — he was the first overall pick of the 1995 draft — but after he tore up rookie ball for four whole games, he jumped directly to Lake Elsinore in the California League. Anyway, I digress. The worst thing about the game was getting into a huge confrontation with an usher in the 9th inning. I was trying to get down to the Angels’ dugout, and she was power-tripping beyond belief, and let’s just say it got ugly. I’m glad to say that she didn’t prevent me from getting this:

Angels coach Joe Maddon gave me that lineup card. (I barely knew his name at the time.) “It’s the best one in the majors,” he told me, and he was right. It really is a thing of beauty.

That brings us to Day 2 at Qualcomm Stadium. It was an afternoon game, and unfortunately there was no BP, but hey, at least things were relaxed enough for me to take a bunch of photos. Here’s one of rookie Derrick Turnbow throwing a bullpen session: 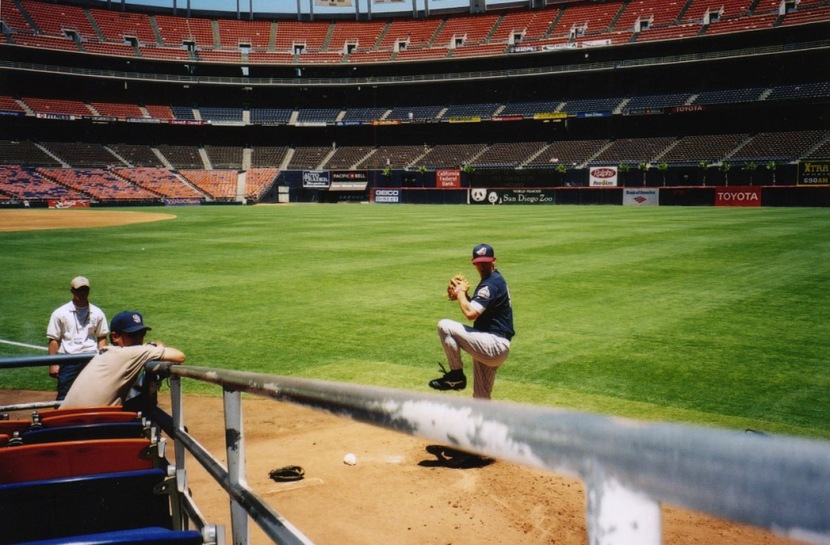 Turnbow didn’t give me that ball, but I did get one soon after from Angels pitching coach Bud Black.

A little while later, on the other side of the stadium, I caught up with Brian Cooper: 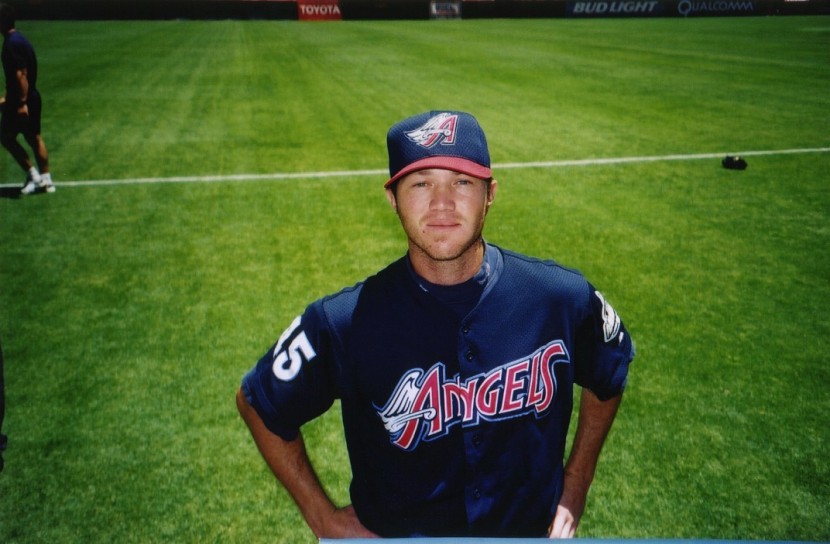 I got to talk to him for a bit, and it really made my day.

My 2nd ball of the afternoon was thrown all the way up into the empty Club Level by Padres pitcher Brian Meadows — for no good reason, it should be noted. I was standing near him and asked him for it, and he could’ve easily flipped it to me, but no, he had to be a jackass and launch it 200 feet away. It took a long time for me to get there, at which point an usher handed it to me. Still counts. My rule is that I’ll accept baseballs from stadium employees, but not fans.

Then I got a bunch of autographs, starting with this guy:

In case you can’t tell, that’s Trevor Hoffman wearing medical scrubs. I’d collected lots of ticket stubs after the previous game, so I got him to sign one . . .

On the ticket pictured above, did you notice the image of PETCO Park? The Padres had just broken ground two months earlier, but the new stadium was still four years from opening — kinda cool to look back at it now. I didn’t think much of that ticket at the time, but now that I’ve visited PETCO and seen countless games there on TV, it’s like . . . whoa, that’s exactly what the stadium ended up looking like.

All my other autographs are gonna seem lame compared to Hoffman. Here’s Adam Eaton:

I also got some players and coaches to sign older tickets from other games, including Matt Clement, Al Levine, Mark Petkovsek, Mike Fyhrie, Mickey Hatcher, Bud Black, and Alfredo Griffin.

I got two more baseballs thrown to me before the game started. The first came from Padres catcher Ben Davis, and the second came from Angels reliever Mike Holtz.

I’m embarrassed to show you the shirt that I was wearing that day, but here goes:

My dad had it made for me. I think (or at least hope) that that was the only time I ever wore it.

Here’s what the stands looked like on the first-base side:

Here’s another shot of the seats and upper levels . . .

. . . and here are the Angels during the national anthem:

As you can see in the photo above, there was no dugout “roof.” The front-row seats were about 10 feet directly above the top step of the dugout. I’ll show you a few more stadium oddities in a bit.

Early in the game, I took a couple photos from a section behind home plate. Here’s one . . . 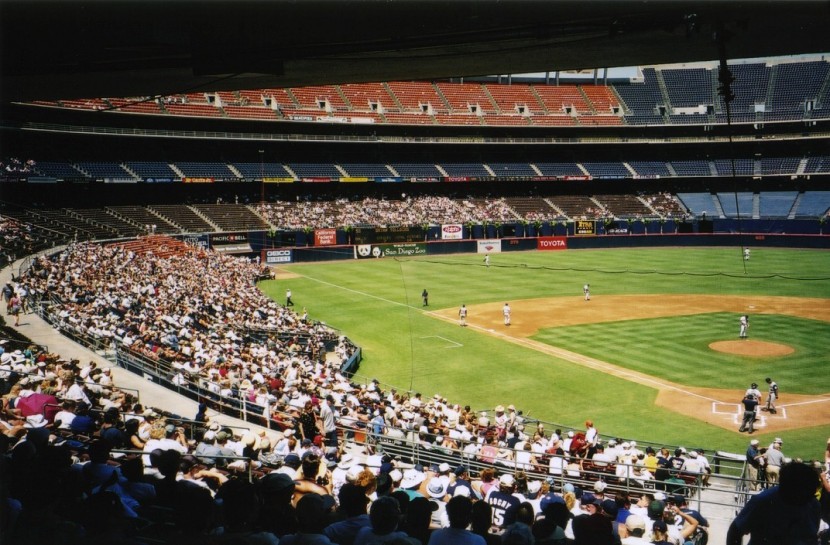 . . . and here’s what they look like stuck together in Photoshop:

Qualcomm Stadium was weird, but that can be said about any football stadium where baseball happens to be played. Did you notice the wide cross-aisle in the last few photos? Here’s what it looked like up close, along with a lovely railing that I constantly had to look through:

The worst thing about that railing was that it prevented me from going down into the seats. The fact that it blocked my view didn’t really bother me. In fact, the crappy view was actually a good thing because no one wanted to sit in the row directly behind that aisle. As a result, I had LOTS of room to run for foul balls, and I ended up catching one on the fly in the bottom of the 4th inning. Ken Hill pitched it. Ruben Rivera hit it. And I was a happy young man. That was my fifth and final ball of the day — No. 1,644 lifetime.

Check out the view from the left field corner: 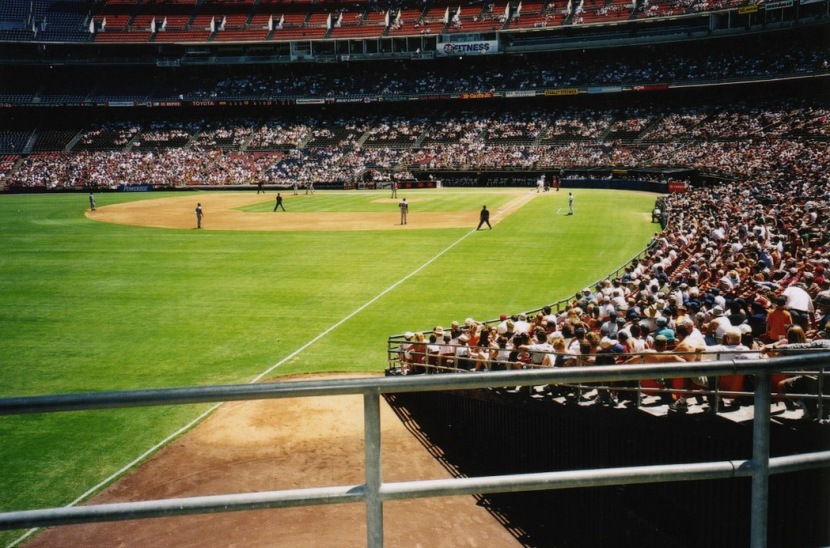 Now THAT is weird. Because of how the stands jutted out and angled back, there was a small portion of the field that couldn’t be seen from home plate.

One thing I loved about the stadium was that the seats extended all the way around the outfield:

This was different from the awful, horseshoe-shaped seating bowls back home; if I wanted to move from left to right field at Shea or Yankee Stadium, I had to walk (or run!) all the way through foul territory and around home plate and then back out toward the other foul pole. It was terrible. But here in San Diego? I felt so free.

This was my view late in the game:

For the second day in a row, the Angels won by the score of 3-2 (only this time it took 11 innings), and I got the lineup card: 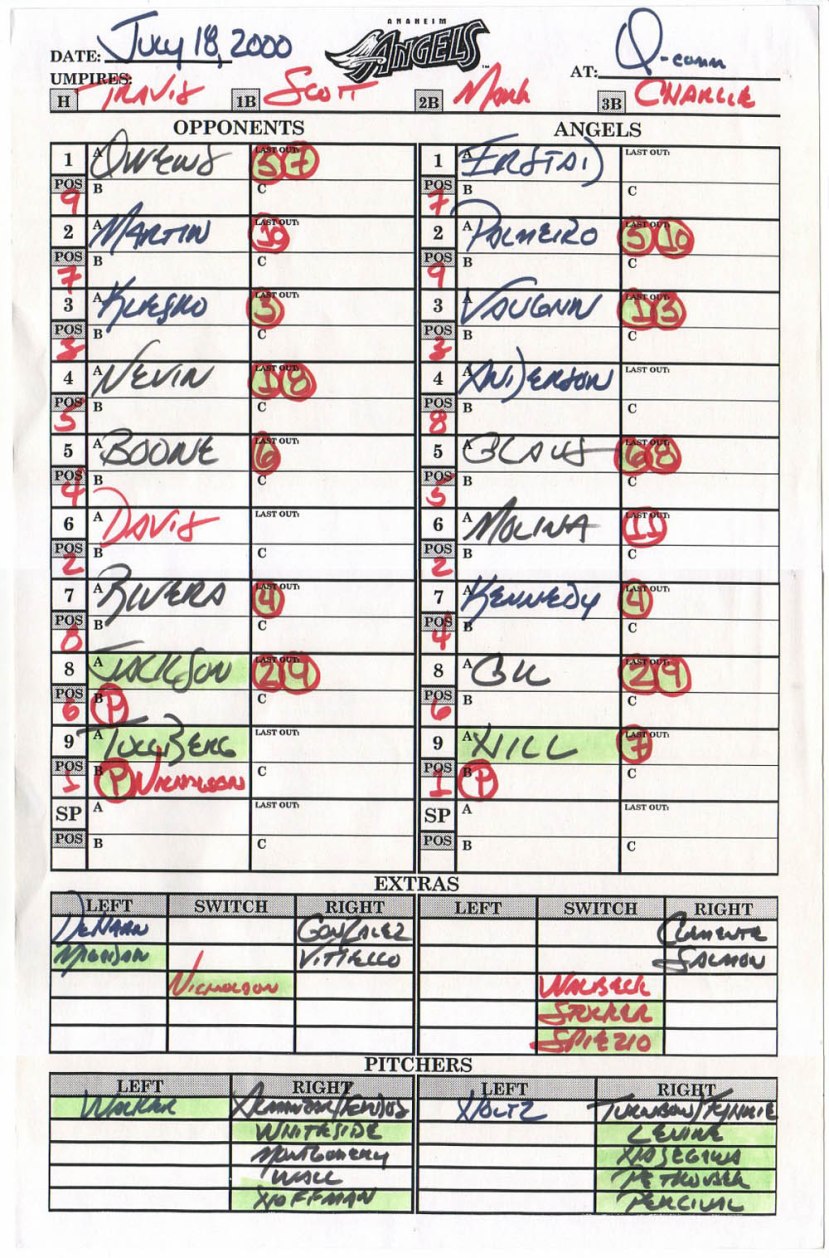 I also got a bunch of ticket stubs on the way out: 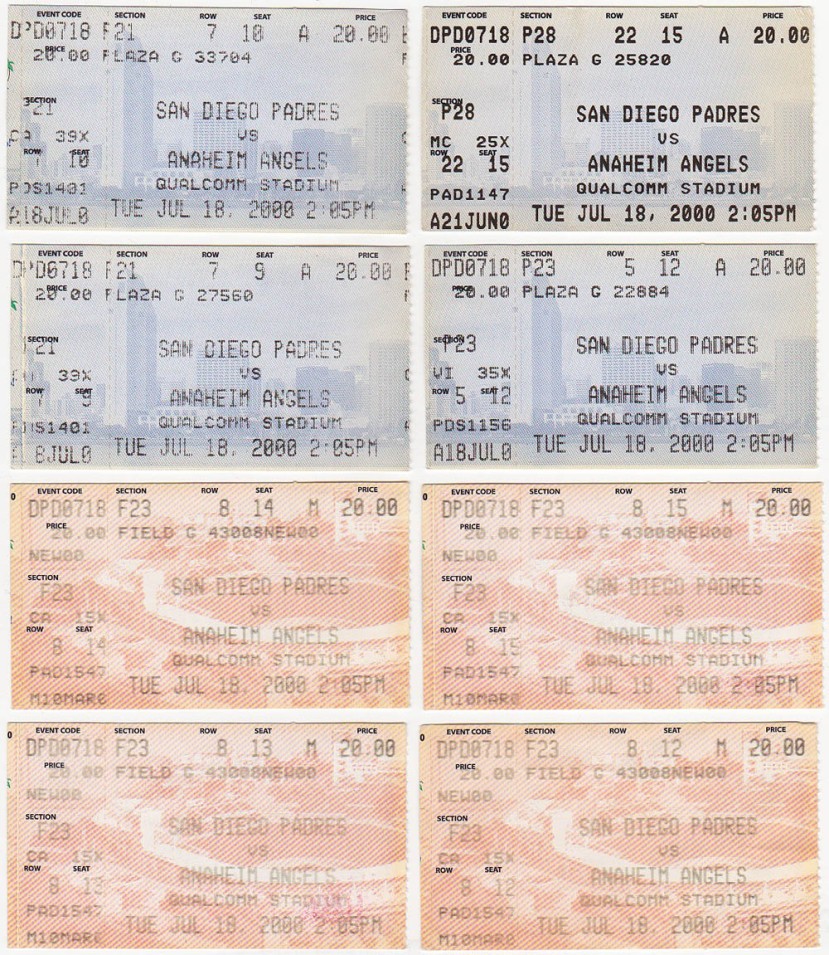 Finally, I’m pleased to share my original handwritten journal entries about Qualcomm Stadium. They’re kinda long, but I think you’ll find them entertaining. The first one starts with the trip itself from L.A. to San Diego . . .

. . . and continues here with tales of women and regret: 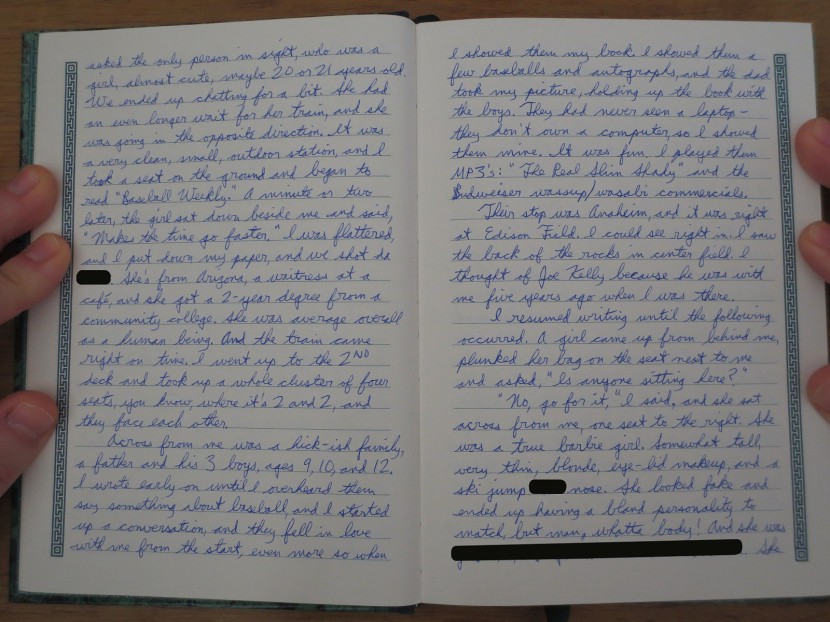 I’ve always been bad at (or shy about) starting conversations with random women in public, and even when conversations get going, I’m reluctant to say anything suggestive or make the first move. In this case, my excuse was that I was in a serious/monogamous relationship, and I simply wasn’t trying to make anything happen with anyone else. In general, though, my issue isn’t insecurity. I have no fear of getting rejected. I just assume that any woman who doesn’t want me is a lesbian and/or doesn’t like guys with shaved heads, so whatever . . . her loss. The issue is that I never want to seem creepy or make anyone feel uncomfortable, so I hold back and pretend to be polite. Also, given the unusual deal-breakers that I have for potential girlfriends combined with all the hard-to-find traits that I’m looking for, the odds that I’ll randomly meet someone compatible are so small that it’s not even worth trying.

Anyway, here’s the part of my entry when I first arrived at the stadium: 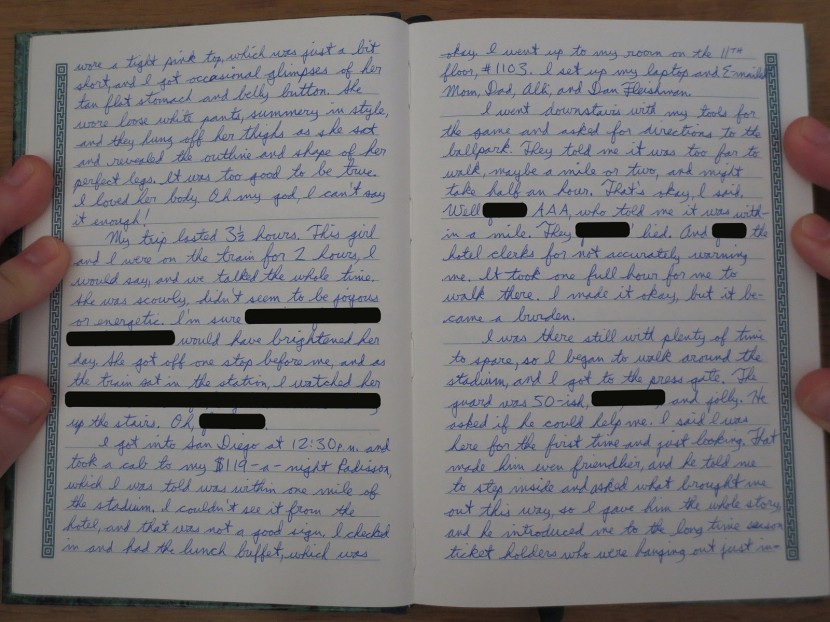 Here I am getting off to a terrible start during BP: 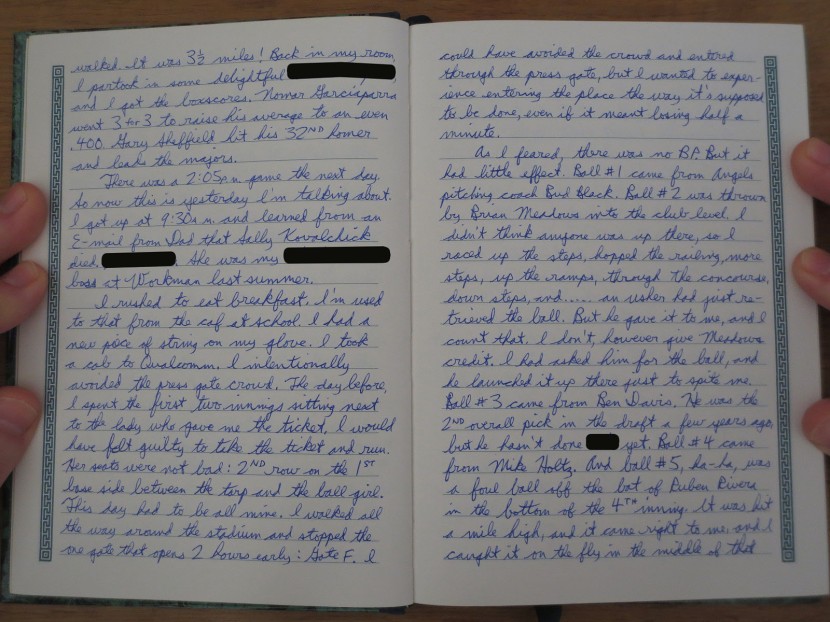 And ends here. But then I started another entry with a few more funny details about my second game at Qualcomm: 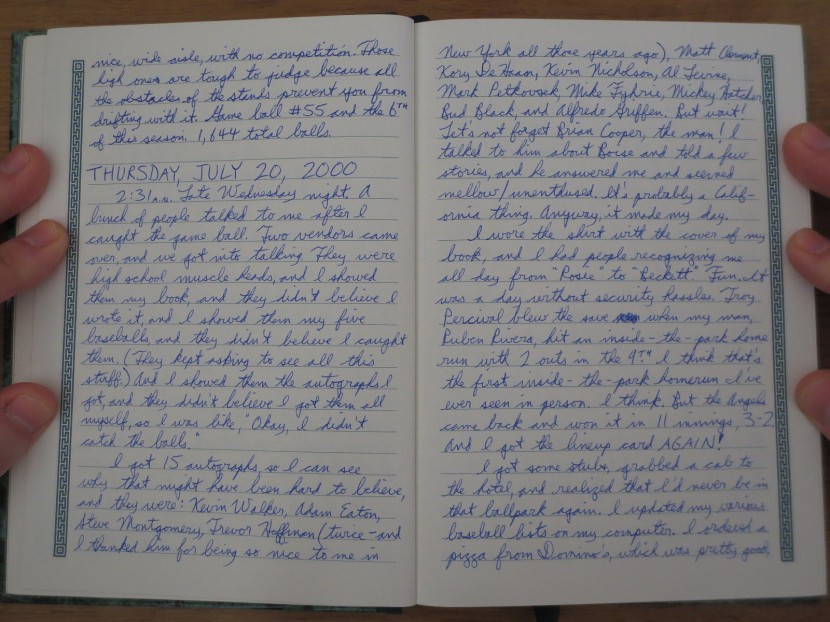 Here’s where it ends. 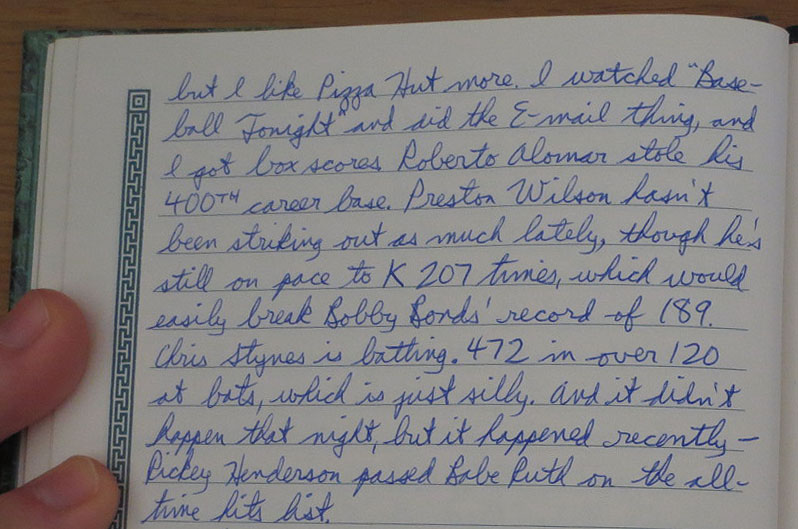