At the start of the 1999 season, I knew that the Kingdome’s days were numbered, but I didn’t realize just how numbered. I’d never been there, and I really wanted to go for a couple of games, but I figured I had all summer to plan a trip. Safeco Field was still under construction, and I assumed that it would open in 2000. As it turned out, Safeco was nearly done by the spring of 1999, and I discovered in May that the Mariners were planning to start playing there after the All-Star break! I had two choices: buy a last-minute plane ticket and get my ass to Seattle or “be responsible” and just forget about it. To complicate things, my college girlfriend, Alli, was staying with me and my parents for the summer, and the thought of leaving her for a weekend didn’t seem right. Long story short: I went to the Kingdome and brought her with me. Hell, it wasn’t cheap, but I’d recently made some money from How To Snag Major League Baseballs. And that’s what money’s for right?

Anyway, on the morning of May 29, 1999, Alli and I woke up insanely early in New York, headed to the airport, flew to Seattle, and got a ride to our hotel. On the way, I took several photos of both stadiums side by side. Here’s one . . .

I don’t know if the word “fugly” had been invented by 1999, but it certainly should’ve been. There’s really no other way to describe the Kingdome — and yet I was thrilled to be there. Up to that point in my life, I’d been to 17 different major league stadiums and was already trying to visit as many as possible.

In the early afternoon, Alli and I made the short walk from our hotel to the dome. Here’s a photo of it that she took — look closely and you’ll see me leaning against a tree:

This was the scene shortly before the stadium opened:

It was Beanie Baby Day, so there were a zillion kids lined up outside the gates. Thankfully, we were not stuck at the end of that line.

(Alli and I each had summer jobs — she was working at the Argosy Book Store, and I was interning at Workman Publishing — so we had to make this trip on a weekend. In fact, we pretty much had to go on this particular weekend. There was no avoiding this dreadful promotion.)

When the stadium finally opened and I ran inside, a friendly usher pointed out a ball that was sitting in the front row along the left field foul line. Sweet! I was on the board.

The stands got crowded fast. There wasn’t much action. It was maddening, and when the Devil Rays took the field for batting practice, I decided to head to right field. (At the Kingdome, the visiting teams occupied the right side.) On my way out there, I caught a home run on the fly in left-center — no idea who hit it. I was so busy making my way through the crowded aisle that I didn’t see it coming ’til the last second.

Once I made it to right field, I got my third ball of the day thrown to me by Rick White. Then, toward the end of BP, I used my glove trick for ball No. 4 along the right field foul line. Some other kid with a device had beaten me earlier for a ball; he was nice enough to let me get this one.

Just before the game started, I worked my way down to the Mariners’ dugout on the 3rd base side and got my 5th and final ball of the day from Butch Huskey . . . I think. It was tossed from under the dugout roof . . . and I was busy dealing with a rude usher . . . and Huskey had just disappeared from sight with a ball in his hand.

Look how crowded it was during the game:

Okay, fine, so the upper deck in right field had lots of empty seats . . . 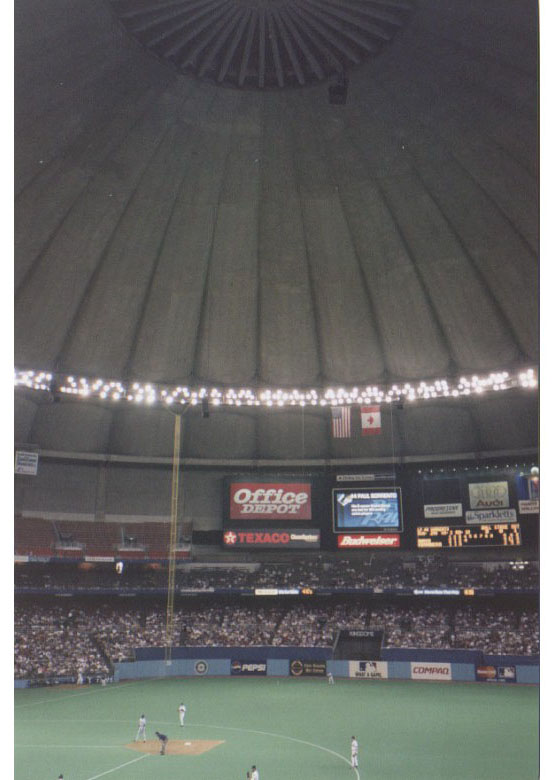 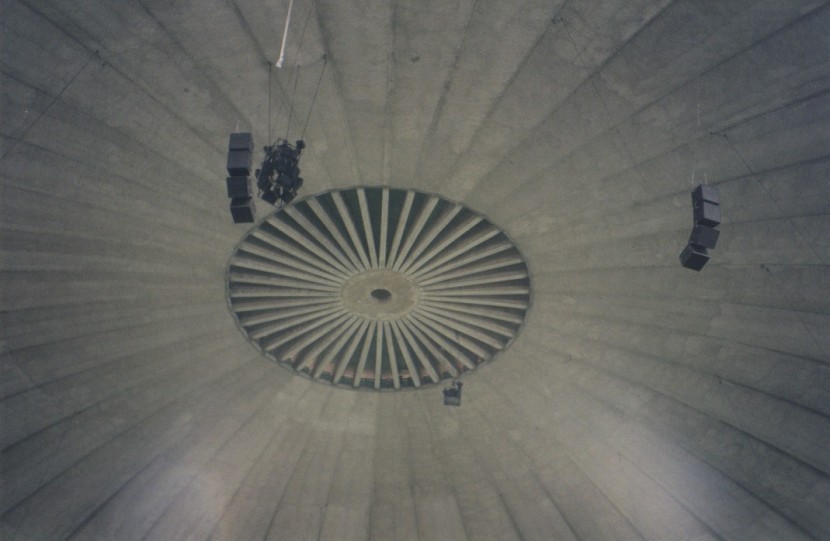 By the way, if you scroll four photos back, you can see Jeff Fassero warming up in the top of the 2nd inning. Better-known Mariners in this game: Alex Rodriguez (who went 2-for-4 with a pair of doubles and two runs scored), Ken Griffey Jr. (0-for-4 with a walk and a run), and Edgar Martinez (2-for-5 with two RBIs). Lesser-known Mariners in this game: Charles Gipson (0-for-1 with a run scored), Jose Paniagua (two-thirds of a scoreless inning pitched), and Rafael Carmona (one inning pitched; one solo homer surrendered). The Devil Rays, meanwhile, had some superstars in the lineup such as Jose Canseco and Fred McGriff, along with a few guys that I don’t even remember, like Danny Clyburn and Mike Duvall. (Have you heard of Danny Clyburn and Mike Duvall? Be honest.)

After the final out, Alli and I had our picture taken . . .

. . . and I collected a bunch of ticket stubs, including five that were different:

That’s pretty much it.

Alli and I went back the next day, and I snagged 14 balls. I don’t plan to blog about that game because (a) I didn’t take any photos and (b) I didn’t log each ball in my journal.

Speaking of my journal, here’s the beginning of my original handwritten entry from May 29, 1999:

The entry (which contains lots of details not mentioned on the blog) continues here . . . 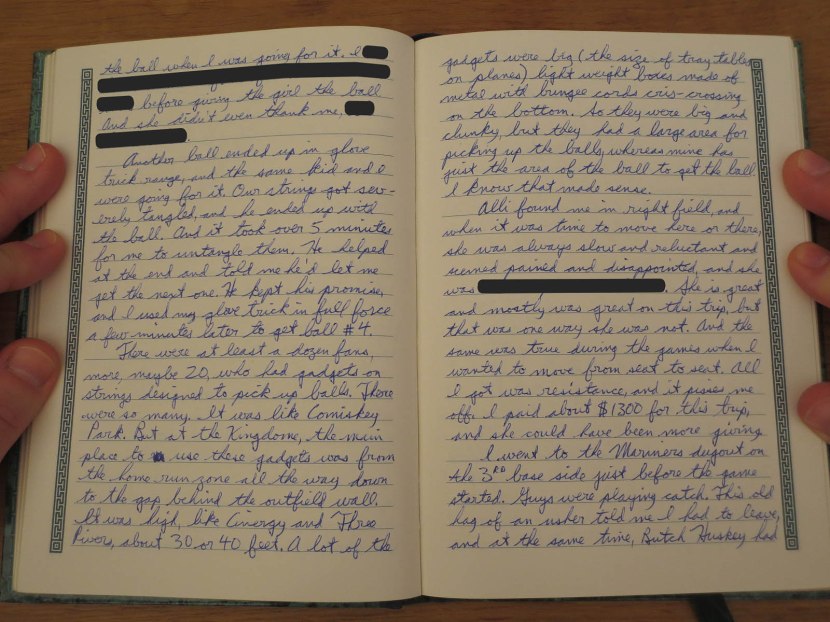 The precision with which I used words to document my life is astounding. I’ve said it before, and I’ll say it again: I’m *so* glad I did it. I know I missed out on some experiences because I was busy writing in my journal(s) — but the stuff I did write about is 100 times more memorable than it would’ve been. Of course, it also helps to have photos, and hey, as long as I’m blogging about Seattle, I might as well share two more pics from the breakfast that I mentioned in my journal. (I’m talking about the breakfast on May 30th — the day after this game.) Here’s a shot of me and Alli . . .

. . . and here’s a group photo of us with my friend Morgen and her boyfriend Matt: 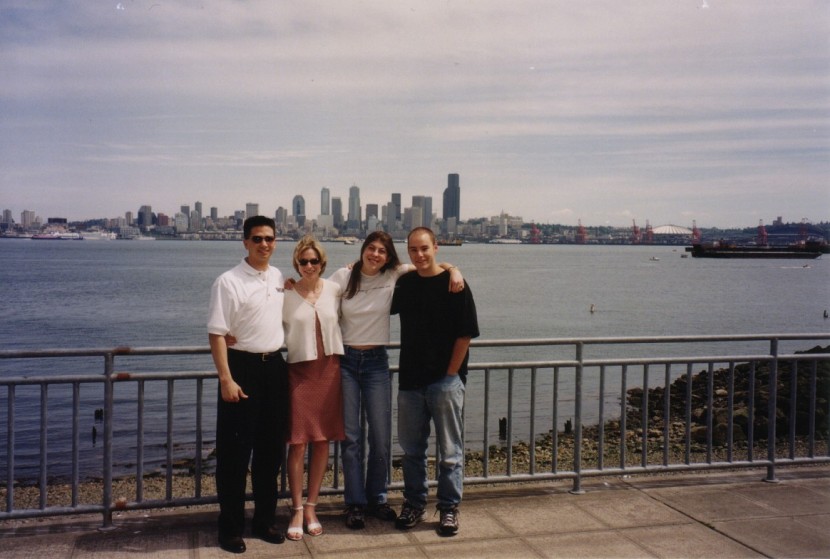 That was the last time that I ever saw Morgen. Life is funny. Morgen Morie. We were freshmen together at Guilford College, and then she transferred. I wonder what became of her — where she lives and what she’s been doing for the last 14 years. I’m tempted to join Facebook just to try to find out. Anyone want to look her up for me? Am I being creepy? Just reminiscing about an old friend (and wishing I had a better sense of style). That’s all.