My girlfriend Robin had been to Citi Field once before. But not with me. So we decided to do something about that: 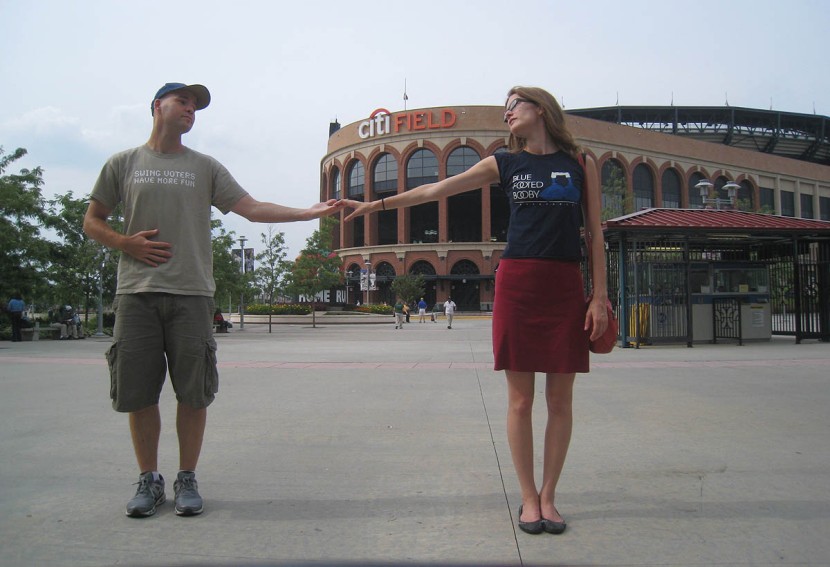 When the stadium opened at 5:10pm, we headed out to right field and saw these two players standing near us:

In the photo above, that’s Ramon Ramirez on the left and Frank Francisco on the right.

Wanna guess what happened when Robin (who’s bilingual) asked Ramirez for a ball in Spanish? Yes, of course he tossed it to her, but here’s how it all went down . . .

Robin, knowing that I’d be able to count the ball in my stats if I attained possession of it first, kindly stepped back and allowed me to catch it. Then, with the players still watching us, I quickly handed it to her. Here she is with it: 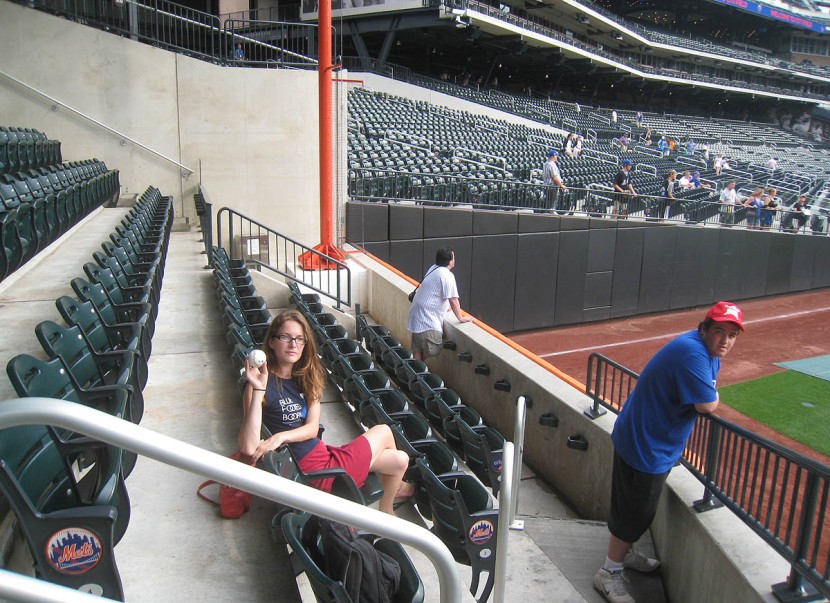 (For the record, I *did* actually give it to her to keep. I’m so nice. And by the way, in the photo above, the fan in the red cap is named Griffin. He and I have gotten to know each other this season, and we crossed paths throughout the day.)

Less than a minute later, Ramirez unexpectedly tossed me another ball, which I counted as my 2nd of the day. I hadn’t even asked him for it. The reason why he gave it to me was that Francisco told him to. Francisco knows about my collection and (perhaps because he also knows about the charitable component) thinks it’s cool. After I got the 2nd ball from Ramirez, Francisco asked me how many balls I was up to.

“Six thousand, two hundred and four,” I said. He and Ramirez and Manny Acosta (who was now standing with them) all stared at me blankly.

Robin and I then hurried to the left field seats, and as soon as we got there, I caught a home run on the fly. I’m not sure who hit it, but I think it was Scott Hairston. In order to make that grab, I had to drift down to the front row and reach over the railing above the party deck. Two minutes later, I snagged another home run ball that landed half a dozen rows back, and less than a minute after that, I caught this: 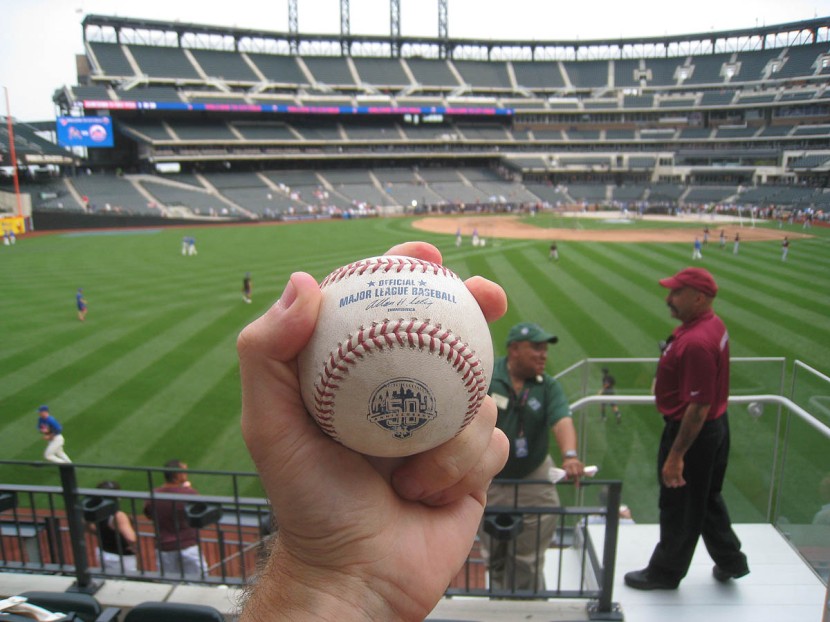 That was my 5th ball of the day — the first four were not commemorative — and it was thrown by Garrett Olson. Once again, I hadn’t even asked for it. In fact, no one had. With his back facing the stands, Olson randomly (and totally unexpectedly) flipped it up over his shoulder, kind of like a backwards hook shot.

In the photo above, do you see the “hospitality attendant” in the green shirt on the staircase? He’d been there the day before, but prior to that, I hadn’t ever seen him. Why am I pointing him out? Because after I got the ball from Olson, he said in a rude tone, “Okay, you’ve gotten three! Why don’t you take a walk!”

“You heard me!” he barked with a dismissive wave of his hand. “Take a walk and give someone else a chance!”

“I’m not going anywhere,” I said. “I paid to be here and catch baseballs, so why don’t you mind your own business and do your job?”

I was **SO** pissed off, and the guy kept yapping. I considered pushing him down the stairs, but instead decided to inform him about what I actually do with the baseballs — you know, giving balls to kids, raising money for charity, and so on. Surely, that would help defuse the situation and get him to understand what I’m all about, right?

When I started telling him about it, he interrupted and said, “Yeah right.”

“Dude, you have NO idea who I am or what I do!” I shouted, “so just be quiet!” As soon as I said that, I cringed because it sounded like I was talking like a wannabe big shot, but that’s not how I meant it. I literally meant that I was a stranger to him and that he shouldn’t make judgments or assumptions. After that, he *still* wouldn’t shut up about giving balls to kids, so I pulled a ball out of my backpack and shoved it in his face and said, “Okay, tough guy, here’s a ball for you! Give it to the kid of your choice so that YOU can be the hero.”

“Why don’t you give it to that kid over there?” he said, pointing at a little boy with no glove who wasn’t even facing the field. I was embarrassed for the kid and his mom who were suddenly thrust into the middle of this idiotic spectacle — two innocent bystanders who’d been turned into pawns by this dim-witted employee.

“I’d be delighted to,” I said, and then I walked over and handed the ball to the kid. The whole situation was revolting, and I wanted nothing more than for the Mets to lose BIG.

Thankfully, there were two things that helped put me in a better mood. The first was my view when the Marlins took the field . . . 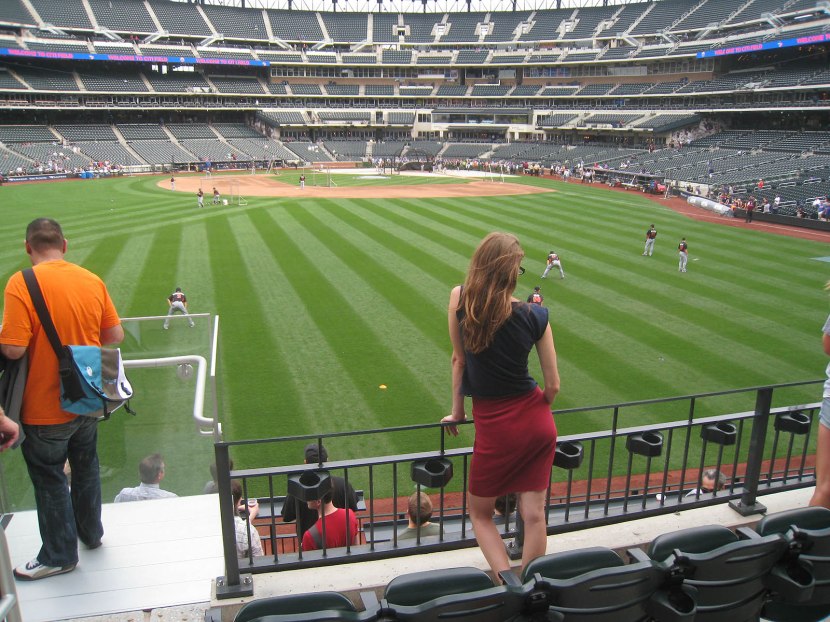 . . . and the second was getting to catch up with Heath Bell. Here I am with him in foul territory: 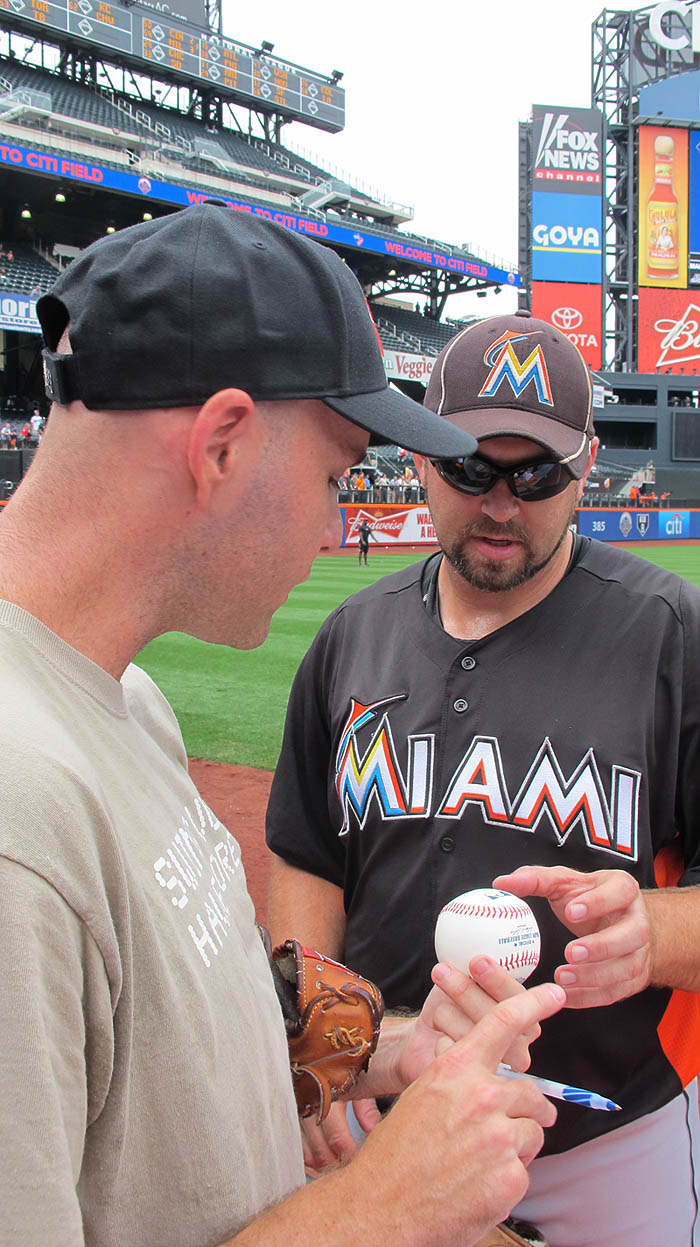 Do you remember the ball that I had him sign for my friend Mike? Well, I brought the ball back with me and got Heath to write more on it. You see, Mike is a ballhawk with roughly 80 baseballs to his name. He’s trying hard to reach triple digits this season, so here’s what I got Heath to write: 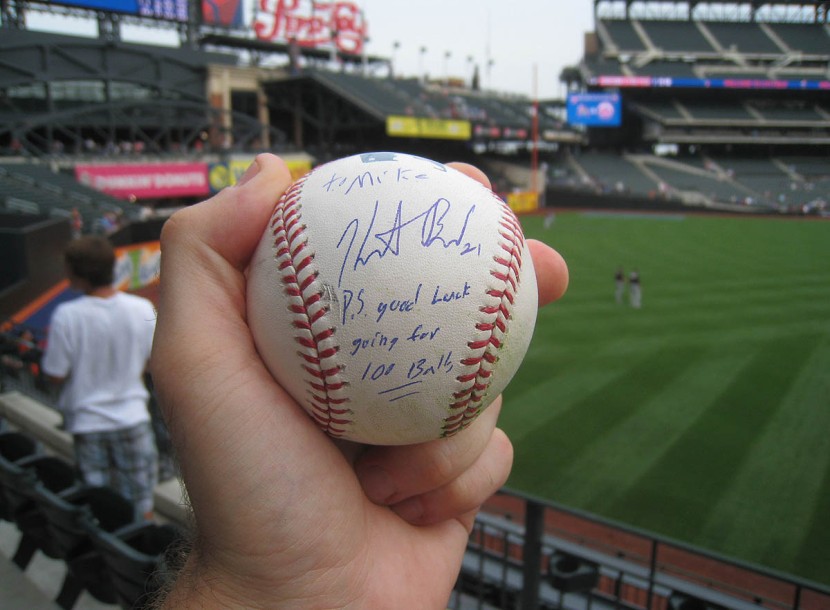 Am I a great friend or what? Actually, Mike is truly the great friend. With his help, I’m going to make another attempt to break the world record for catching a baseball dropped from the greatest height — more than 1,000 feet. Mike works for the FAA and set up the entire helicopter stunt last month; we’re now in the process of picking new dates to try again.

As for the rest of batting practice (which I spent in left field) . . .

My 6th ball was thrown by Justin Ruggiano, and my 7th was thrown by Chris Hatcher. My 8th was a home run that I caught on the fly thanks to Griffin; I didn’t see it coming until he shouted my name at the last second. At the very end of BP, when all the players were just starting to jog off the field, Heath chucked a ball in my direction from more than 150 feet away. I determined quickly that it was going to sail a bit too high, so I climbed up on a seat and then stepped onto the arm rest and reached all the way up and caught it above a sea of hands. There was so much jostling that I briefly lost my balance and thought it was all over. I really would’ve gone down HARD, but thankfully I managed to stay upright, and I got some help getting back down.

After BP, I headed to the 3rd-base dugout and saw Marlins hitting coach Eduardo Perez with three balls in his right hand. When I asked for one, he looked at me and said, “You’re too big. I give them to little kids.” He then extended his left hand at his waist to indicate just how little the kids have to be. I responded by getting down on my knees so that my head was barely poking up above the dugout roof.

“That’s better,” he said with a smile and tossed me one of the balls. (That was my 10th of the day.) Then he gave the other two to the only kids in the section.

Do you remember the commemorative ball that I got from Garrett Olson? Well, I gave that one away to someone before the game, and as a result, Robin and I got to sit in the 2nd row behind the Marlins’ dugout. (She had never sat so close to the action at ANY stadium; at her only other game at Citi Field, she was in the second deck in right field.)

Bryan Petersen was the leadoff batter, and on the 3rd pitch of the game, this happened: 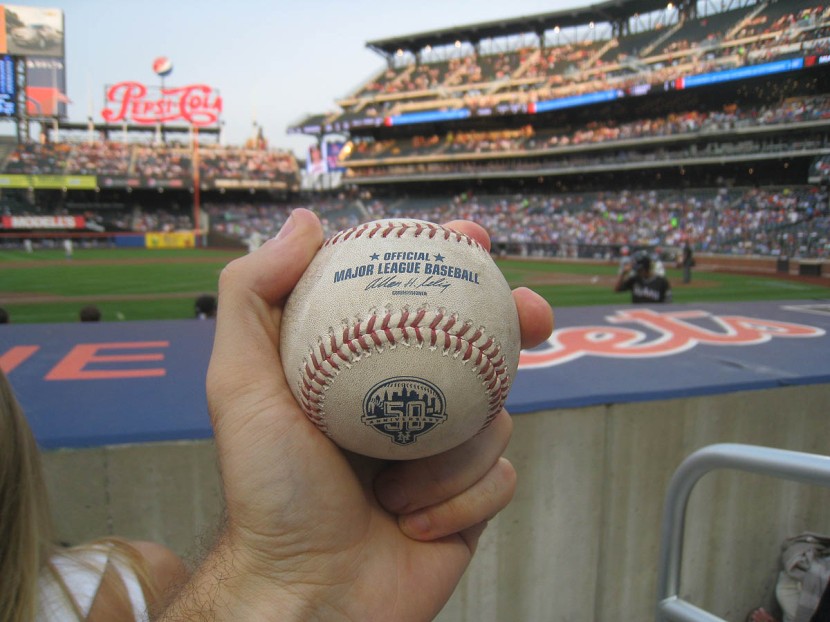 Petersen had sliced a wimpy foul pop-up 10 feet behind me and maybe five feet to my right. Quite simply, I bolted up the steps as soon as it was hit and caught it on the fly above several glove-less hands. This was the 150th foul ball (not counting toss-ups) that I’d ever snagged during an actual game.

There’s something special about Robin. The last time she joined me for a game, I caught a Raul Ibanez homer on the fly . . . and now this. Hmm.

Robin took a bunch of photos during the game. Here’s one of Jose Reyes (who had already extended his hitting streak to 26 games): 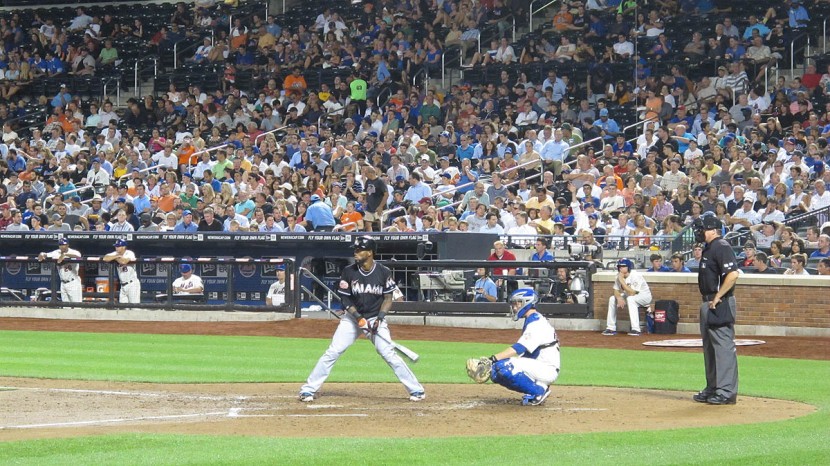 Here’s a conference on the mound, centered around 6-foot-10 pitcher Chris Young . . . 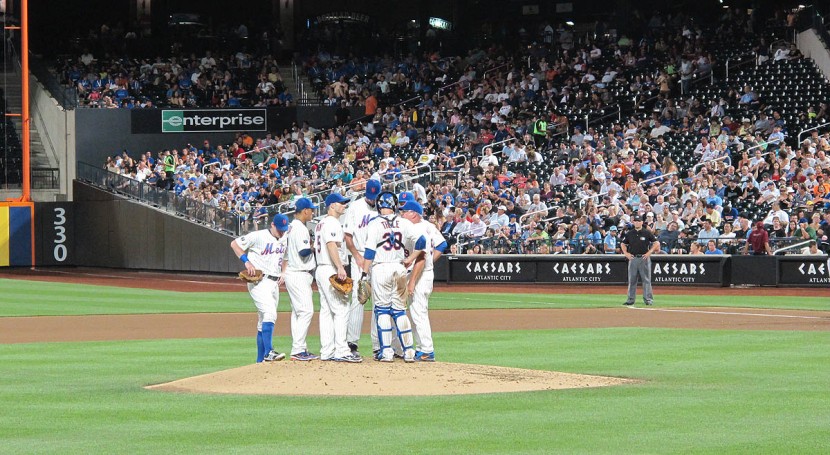 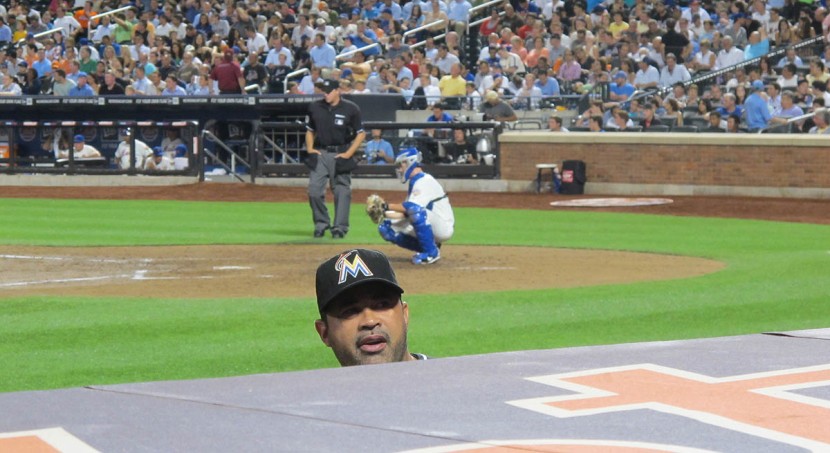 The previous photo isn’t zoomed in. That’s actually how close we were.

During the 7th-inning stretch, I snagged this during the T-shirt launch . . . 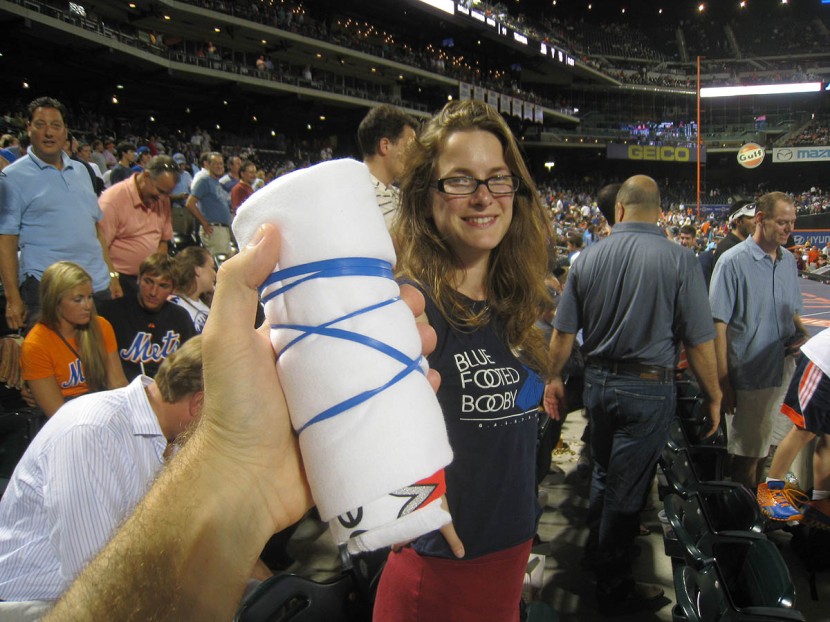 . . . and in the 8th inning, I noticed that Marlins owner Jeffrey Loria was hanging out in the adjacent section: 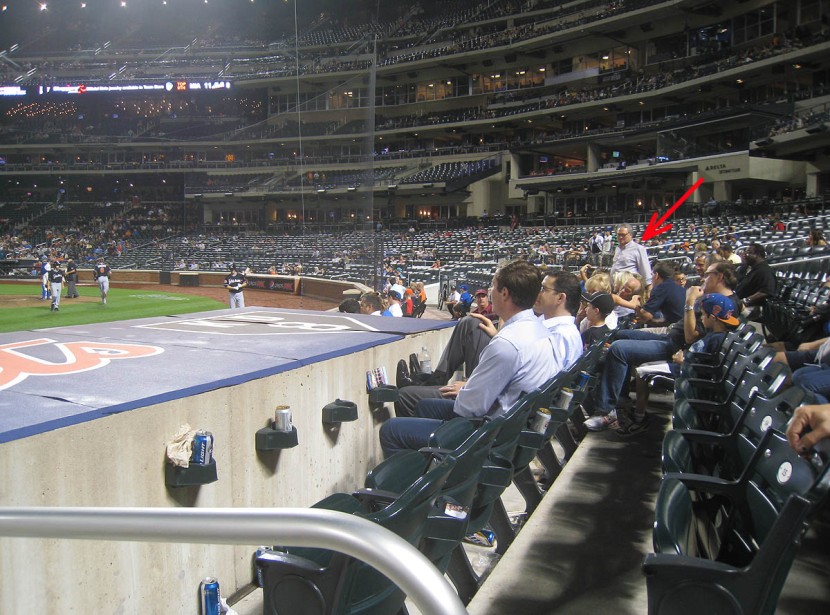 In the photo above, did you notice all the empty seats? Most of the “fans” had taken off because the Mets were in the process of losing, 13-0. Mwahaha!!!

Here’s a photo (taken by Griffin) that shows Robin and me in our seats . . . 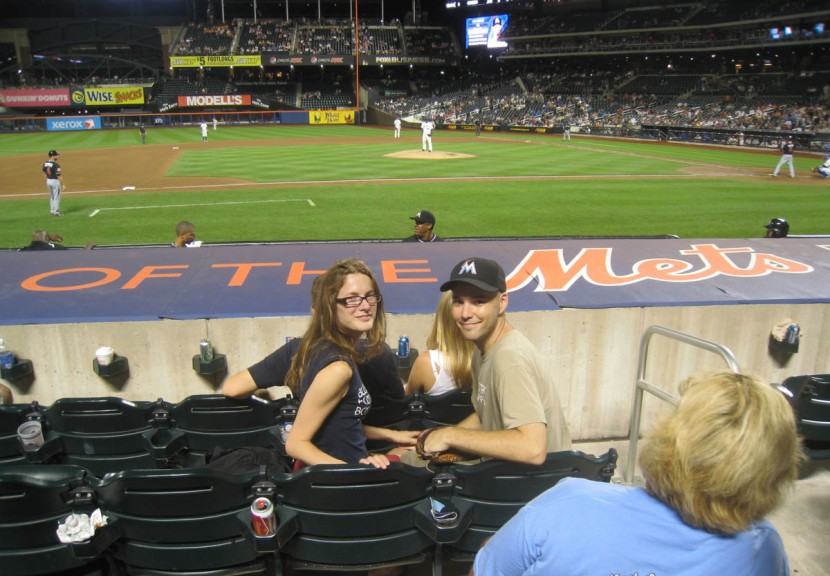 . . . and here we are after the game, posing with my milestone foul ball: 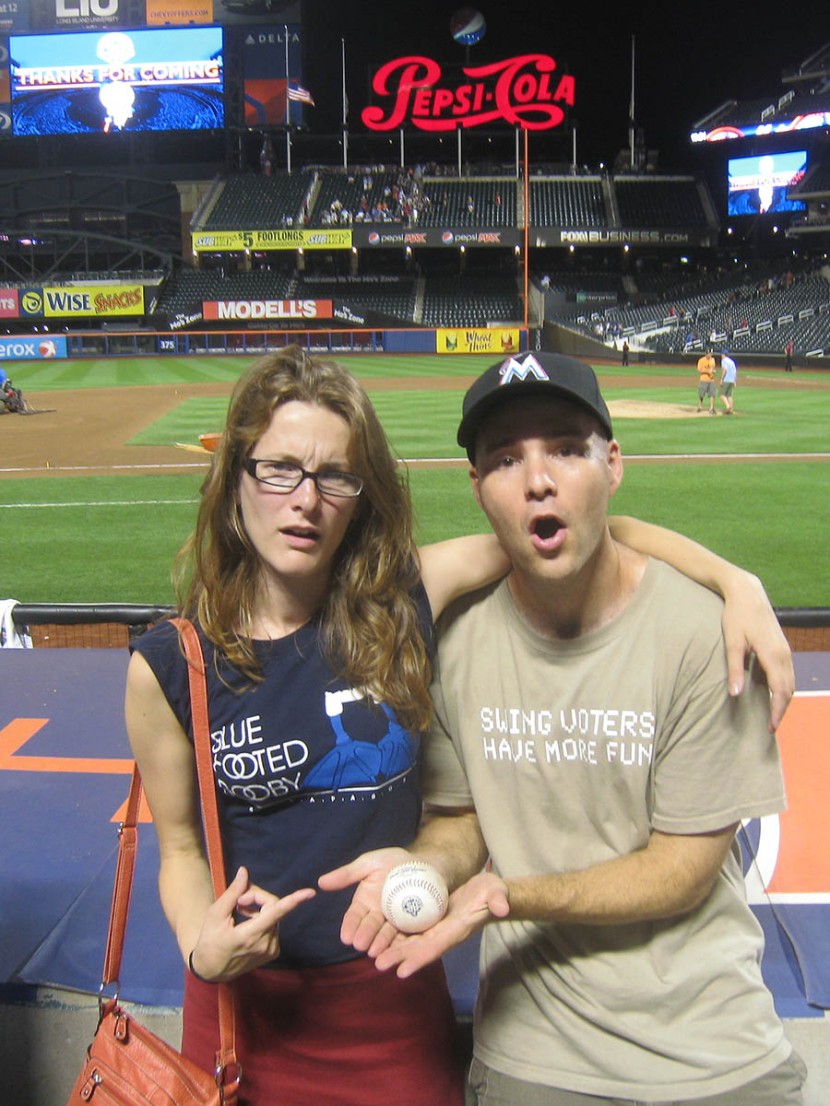 I had tried to get a ball from home plate umpire Paul Emmel — but he recognized me! As he headed toward the tunnel, he shouted, “You’re here every game! How many balls do you have?!”

“Yeah, a FEW!” he said sarcastically before handing out balls to several other fans and disappearing into the night.

Damn. I’ve never been recognized by an ump before. Now that I’m dead to him, perhaps I should’ve gotten my money’s worth and told him that he’s personally provided three of my 6,213.  Anyway, here are the eight balls that I took home:

Of the eight, only one has an invisible ink stamp. Here’s a side-by-side comparison in regular light versus black light:

• 841 consecutive games with at least one ball

• 169 game balls (not counting game-used balls that get tossed into the crowd; 150 foul balls, 18 home runs, and 1 ground-rule double)