Citi Field used to open two and a half hours early. It didn’t matter what type of ticket you had. It didn’t matter what day of the week it was. If the game was scheduled to begin at 7:10pm, everyone got to enter at 4:40pm. Now, unfortunately, because the Mets have spent all their money on people like Oliver Perez and Bernie Madoff, they can’t afford to pay their security guards to arrive as early, so the stadium opens two hours before the first pitch. The only exception occurs on weekends, when FULL season ticket holders can enter two and a half hours early.

This was a weekend — a good ol’ fashioned Saturday night game on FOX — and I wasn’t able to gets my hands on a season ticket. As you might expect, and as you can see in the following photo, I wasn’t happy about it: 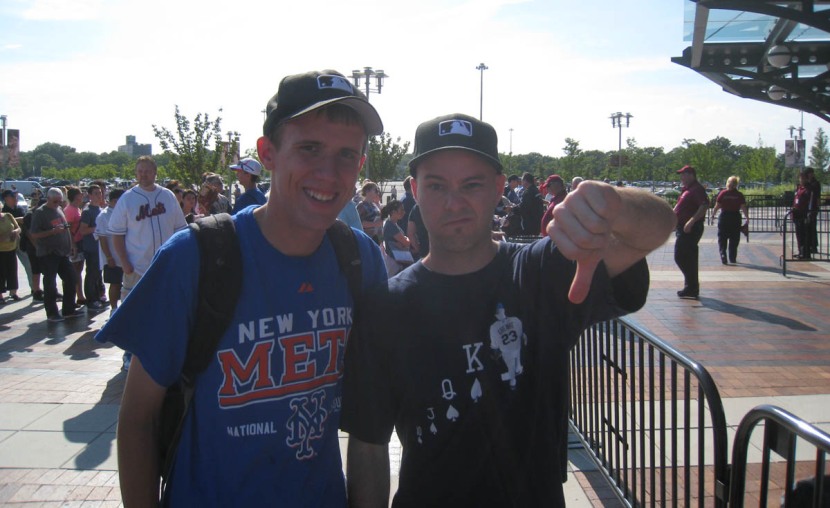 In the photo above, does the guy on the left look familiar? Here’s a hint: he was with me when I snagged 32 baseballs on 6/18/09 at Kauffman Stadium. Here’s another hint: he attended BallhawkFest on 7/23/11 at Camden Yards. The mystery man is Garrett Meyer, a 20-year-old fan from Kansas City, who began the day with a lifetime total of 568 baseballs. Here’s his profile on MyGameBalls.com. This was his first game ever at Citi Field and perhaps his only chance to see the Mets this year, so he VERY much wanted to snag a Mets 50th anniversary commemorative ball.

When we finally got to enter the stadium, we hurried out to the right field seats. I went to fair territory, Garrett hung out along the foul line, and guess which one of us snagged the first ball of the day? Here’s a hint: 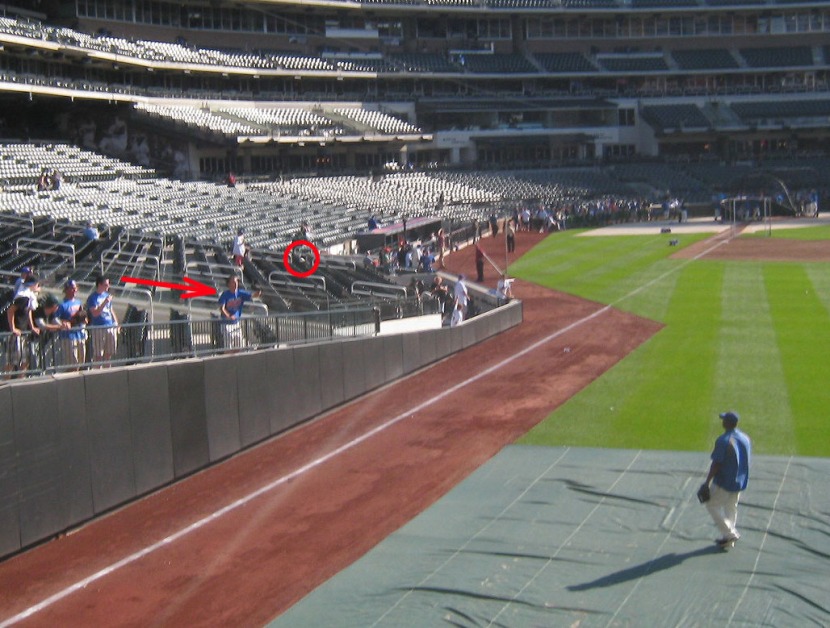 That’s Frank Francisco in the photo above. He can be pretty nice if he doesn’t recognize you as someone who snags lots of baseballs, so Garrett had no trouble getting one from him. Unfortunately, though, the ball was not commemorative. 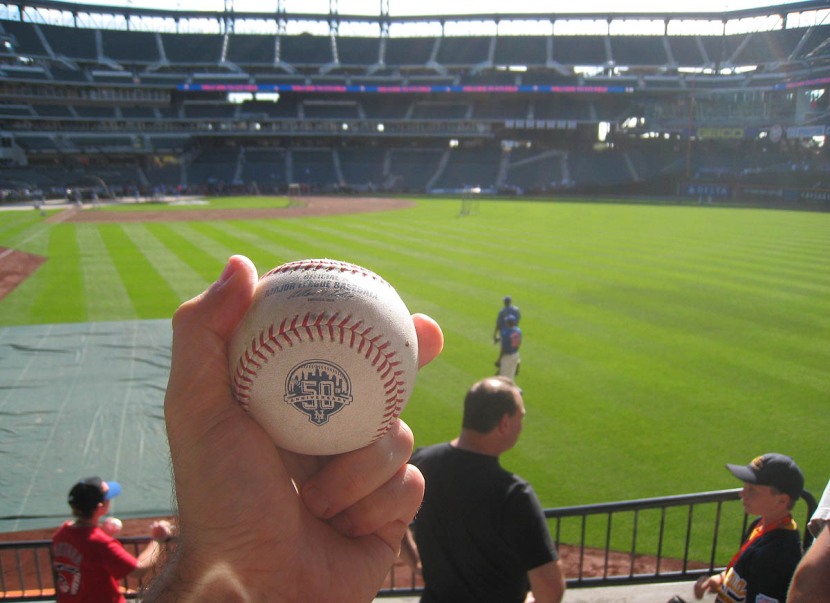 The ball pictured above was tossed by Mets rookie reliever Elvin Ramirez. Soon after I got it, I headed to left-center for the Mets’ final group of hitters. This was the view:

Given the fact that I was twelve miles from home plate, I knew that I wasn’t going to catch a home run ball. Instead, I was hoping that one of the batters would merely hit a deep fly ball in my direction. Do you see the two players standing in center field? The guy on the right is Miguel Batista. He’s always been nice, so I figured that if he had to run back in order to chase one down, I’d be able to get him to throw it to me. Two minutes later, that’s exactly what happened, and I’m happy to report that it was my 200th ball of the season.

Things picked up once the Reds took the field. During the first group of hitters, I snagged a home run that deflected to me off another fan’s glove, and during the second group, I made my best catch of the season. In order to describe what happened, I need to show you two photos. First, here’s what my view of the field looked like:

As you can see, I was standing several rows back, but more importantly, do you see the employee wearing green? She’s standing on a little platform that juts out from the regular seats. Here’s another photo that shows the platform from the side:

One of the many right-handed batters on the Reds launched a deep fly ball in my direction — I mean RIGHT in my direction. I knew that I was lined up perfectly, but I froze for a moment to determine just how far it was going to travel. As the ball reached its apex, I began drifting down the steps, and by the way, do you see the two large men in the photo above? They were both spilling out into the staircase, so I had to elude them, but anyway, after weaving in and out of the crowd, I made it all the way down to the platform. Then, as the ball was descending, I scooted forward and lunged as far as possible over the plexiglass, with the palm of my glove facing up. I didn’t think I was going to be able to reach the ball, but I figured, “Hell, now that I’m down here, I might as well stick my glove out,” and whaddaya know? I felt the ball hit the tip of my glove. For a moment, though, I didn’t know if I’d actually caught it. There were so many people reaching and so many bodies jostling that I couldn’t even see my glove — and then a scary thing happened: I began to tumble over backwards down the stairs. Thankfully, though, before gravity had its way with me, I reached out with my right hand and clumsily grabbed the plexiglass. I jammed my right thumb in the process, but hey, at least I didn’t break my neck.

Scroll back up for a moment and look at the first photo that shows the employee wearing green. So you see the little kid wearing the “DAVIS 29” shirt? I gave him one of my baseballs.

Look how crowded it was at the end of BP: 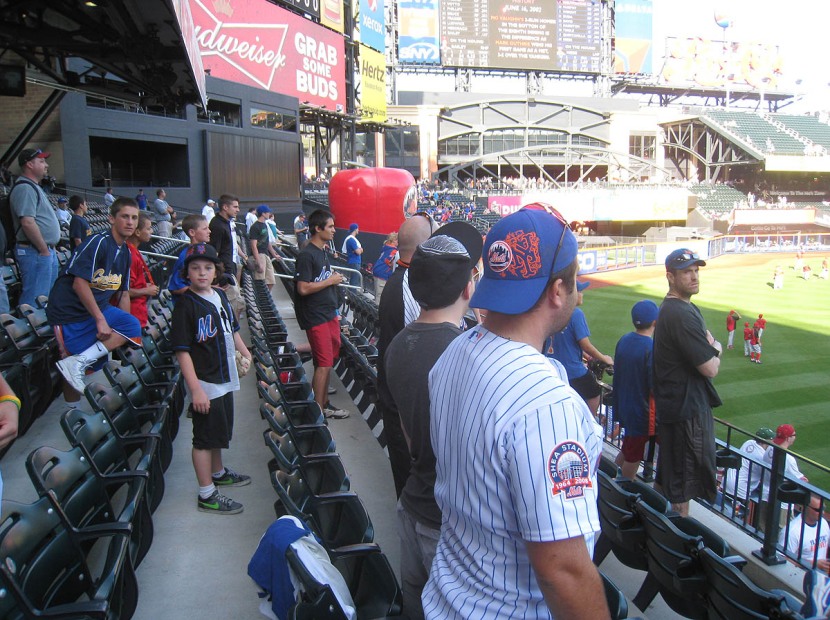 There was NO room to run, and yet I somehow managed to catch one more homer. I had to move back a couple steps and drift slightly to my left and jump at the last second. As soon as I caught it, the guy behind me grabbed my glove and tried to yank the ball out. I yanked my glove much harder and broke free of his grasp, and let me tell you, I was really pissed off.

After batting practice, I took photos with a couple of fans who recognized me:

In the two-part photo above, I’m with Melissa on the left and Andrew (who first contacted me through my YouTube channel) on the right.

In my previous entry, do you remember my rant about all the ill-conceived sideshows (for lack of a better term) that take place at Citi Field? Well, here’s photographic evidence of another:

It was “Greek Heritage Night.” Those girls were part of a “Greek dance troupe” that performed near one of the concession areas during the game. 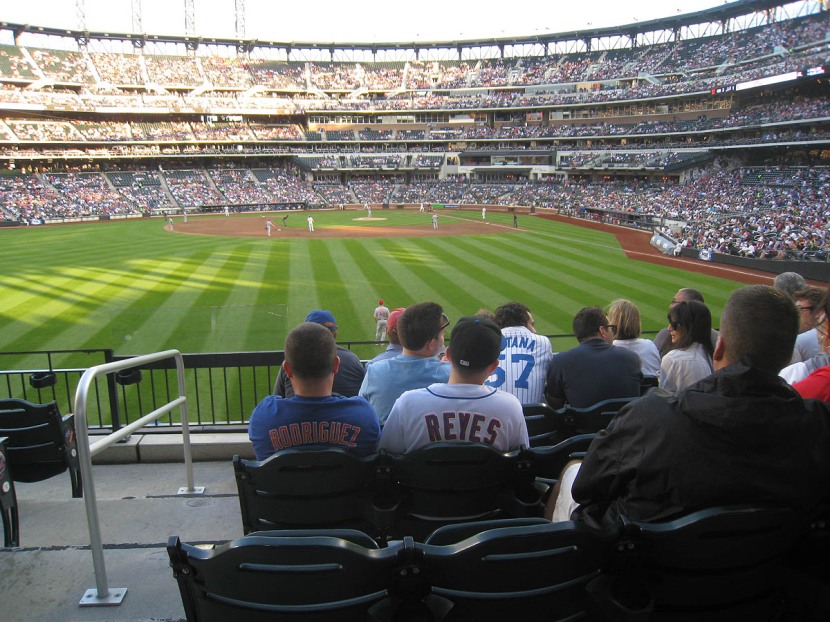 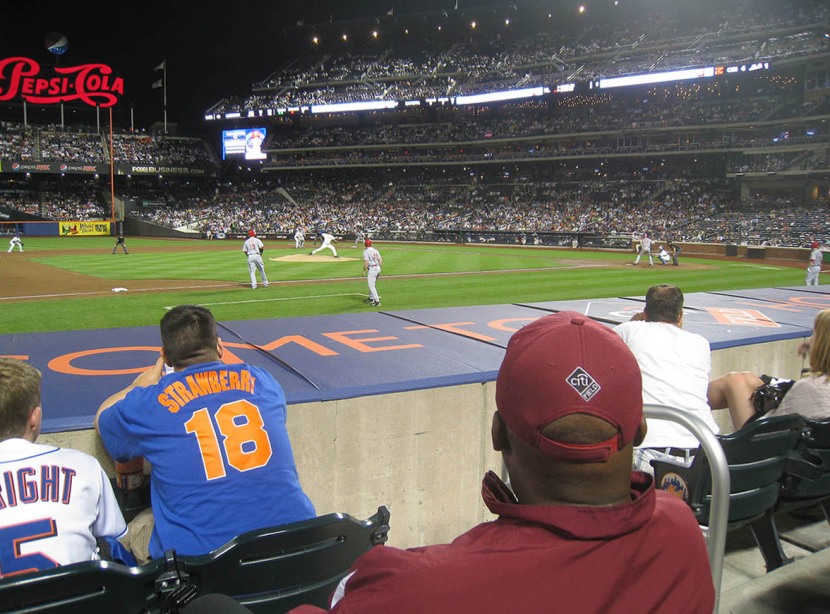 (Dear Mets: the dugout roof needs some help. I know that it’d cost a bit of money, but I suggest hiring someone to paint it, rather than pasting down those cheap panels. Seriously. Come on.)

When Aroldis Chapman entered the game in the bottom of the 9th, I decided to chart the velocity of each of his pitches. He threw four sliders, ranging from 86 to 87 miles per hour, and his other 17 pitches were fastballs, ranging from 95 to 99. Not too shabby, but it would’ve been nice to see him hit triple digits.

After the game, which the Reds won, 4-1, Garrett and I briefly went our separate ways. He had already snagged a commemorative ball — a 3rd-out toss-up in the middle innings — so when he failed to get one from the home plate umpire, it wasn’t a disaster. Meanwhile, look what I got at the dugout:

Not only did Reds 1st base coach Billy Hatcher toss me a commemorative ball, but Dusty Baker gave me the lineup cards. Here’s a closer look at them:

I’ve gotten lots of lineup cards over the years, so for the most part, I know how to make sense of them. The lefties’ names, for example, are printed in red. The circled numbers indicate which batters made the final outs of various innings. And so on. But there are certain things on these cards that I can’t figure out. Do you see the relief pitchers listed in the right-hand columns? I assume that the handwriting next to their names indicates how they each might be used. Doesn’t that makes sense? The “CL” next to Chapman’s name probably means “closer.” I suppose that “SIT” and “SU” next to Marshall’s name means “situational” and “set-up,” respectively. But what does the “S” stand for? What about “LMS” next to Sam LeCure’s name or “VS” next to Arredondo’s? Does it say “MI” next to Hoover for “middle innings”? Meanwhile, why does it say “Dusty’s +” on the upper right? I like that he signed the card “Johnnie B. Baker Jr.” I didn’t know until I looked him on Wikipedia that that’s his real/full name.

Check out the back of the card:

That chart shows when these guys pitched, how many innings they worked, and how many pitches they threw. Look at Tim Byrdak’s line. On June 12th, he threw 17 pitches in two-thirds of an inning, then didn’t pitch on June 13th (when R.A. Dickey tossed a complete-game one-hitter), then worked a 12-pitch inning on June 14th, and had another day off on June 15th. Pretty cool, huh? And hey . . . Jon Rauch’s name is spelled wrong. Haha! He deserves it for being mean.

Keep scrolling past the stats for more photos . . .

• 819 consecutive games with at least one ball

• 9 consecutive seasons with 200 or more balls

Of the five balls that I kept, only one has an invisible ink stamp. Here’s a side-by-side comparison that shows it in regular light versus black light:

Finally, here’s a photo of my two commemorative balls, for which Garrett gets all the credit: 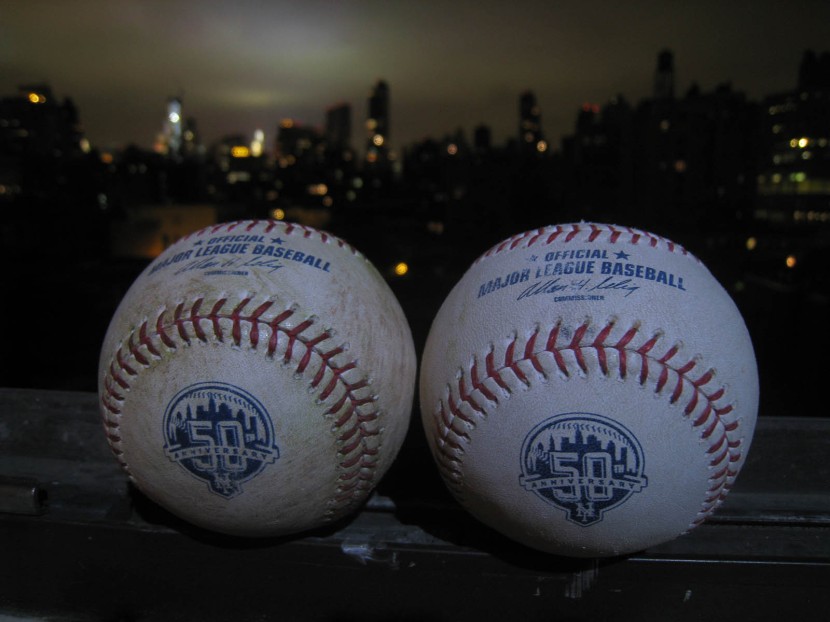 We were hanging out at my place, and he suggested that it’d look cool to get a shot of the balls with the New York City skyline in the background. (Good call, Garrett! You da man.) Good things always seem to happen when he’s around.