I tried something different yesterday: as soon as the stadium opened, I headed to the second deck in right field. Here’s what it looked like as I entered that section:

(Funny how Citi Field and Wrigley Field have similar seating capacities, yet at Wrigley, if you were THAT far away from home plate, you’d be on a rooftop outside the stadium. By “funny,” of course, I mean “sad.”)

In the three-and-a-half-year history of Citi Field, I’d never gotten a ball up there, but yesterday I snagged two. The first was thrown by a player that I *think* was Jordany Valdespin. The second was an Ike Davis homer that landed next to the foul pole in the front row (and luckily didn’t bounce back onto the field).

I spent the rest of BP in left-center and snagged four balls there. The first was a homer by a Mets righty (no idea who) that I caught on the fly after stepping forward onto a chair to elevate above the competition. The second was thrown by Reds pitcher Jose Arredondo. I was several rows back at the time and took a photo of him after I caught it:

In the photo above, do you see the little kid in the “WRIGHT” t-shirt? (Arredondo is just above his head.) That’s who I gave my next ball to — a home run by Joey Votto that I caught on the fly. My fourth ball in left field (and sixth overall) was thrown by Sam LeCure. I was several rows back for that one and ended up scrambling on the ground; LeCure had clearly aimed for me, but his throw fell short, allowing two other (fully grown and gloveless) fans to reach up and deflect it. As soon as I grabbed the ball, I gave it to a girl with a glove.

After BP, I got three toss-ups at the Reds’ dugout. The first came from Mat Latos (who pretty much never gives balls away) and the second came from 1st base coach Billy Hatcher. Check out the following photo of Latos signing autographs:

Did you notice the Reds’ equipment guy in the background? He’s standing in the 3rd base coach’s box, transferring baseballs from the basket to a couple of zippered bags. That’s who tossed me my third ball at the dugout. I was actually surprised that he gave it to me because there was a little kid standing next to me, who couldn’t have been more than six years old, so I handed the ball to him.

Here’s a photo of the ball that Hatcher had given me:

Is that a beauty or what? The logo is too high. It’s scuffed. It’s dirty. It’s smudged. And I love it. Seriously.

(In case you’ve lost count, my baseball tally for the day was now up to nine.)

Here’s what took place between BP and the game: 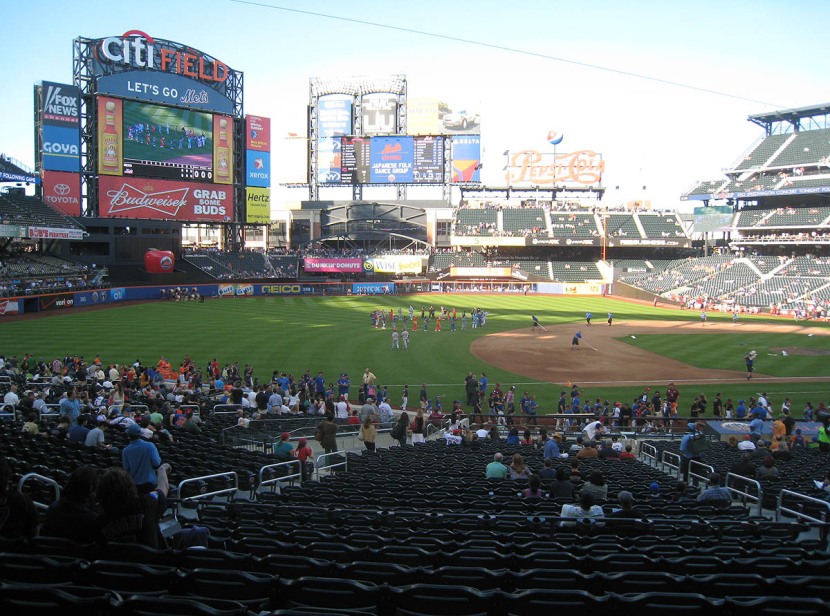 There was a parade of Little Leaguers circling the warning track.
There was a Japanese dance circle in shallow center field.
There was a percussion group setting up their instruments in deep center.

Soon after, there was an interminable succession of presentations and introductions on the field, honoring various community leaders and military personnel and baseball coaches and other people who had been miraculously cured of terminal diseases. Good for them. I mean, really. GOOD FOR THEM. But man, it was too much. There were so many people being introduced that the public address announcer had to rush. It was one of the most annoying half-hour chunks of time that I’ve ever had to endure, and by the end of it, all of these people and groups were indistinguishable. Then, to make matters worse, Aaron Carter performed the national anthem, and yes, it was painful. His voice was unremarkable, he turned one-syllable words into five-syllable nuggets of torture, and worst of all, he improvised the melody. Why do so many of these so-called musicians think that they’re bigger than the song? Just sing it. And then leave. It’s not a concert. It’s a baseball game.

Speaking of the game, this was my view for the first eight and a half innings:

Want to see why I pretty much never catch home runs during games at Citi Field? Here’s what it looked like on my left:

There wasn’t exactly a whole lot of room to run.

The highlight of the game was also the lowlight, and hey, I just realized that the two main players involved both have “J.B.” as their initials. (Why does my brain work like this? I could be thinking of useful things that would benefit humanity, but instead I obsess with wordplay.) In the top of the 2nd inning, Jay Bruce sliced a deep line drive toward the left field corner. Jason Bay raced back and lunged for it on the warning track. The ball hit off his glove. Bay hit his head on the wall and lay there dazed for a moment. And Bruce circled the bases for an inside-the-park homer. I feel terrible for Bay (and for Mets fans who’ve had to endure three seasons of his injury-prone suckiness), but it WAS a cool play to witness. The only other inside-the-parker that I can remember seeing in person was Ichiro Suzuki’s in the 2007 All-Star Game.

In the bottom of the 9th inning, I moved here:

The Reds were winning, 7-3. Aroldis Chapman was pitching, and quite simply, I wanted a better view. Chapman’s first few fastballs “only” clocked in at 94mph, but by the end of the inning, he dialed it up to 98. At the time, I was thinking, “So THAT’S how fast the ball is going to be traveling when it’s dropped from the helicopter? Bring it.”

Since this wasn’t a save situation, I figured that Chapman would toss the game-ending ball into the crowd. Here’s a photo of him (and his teammates) walking off the field with it: 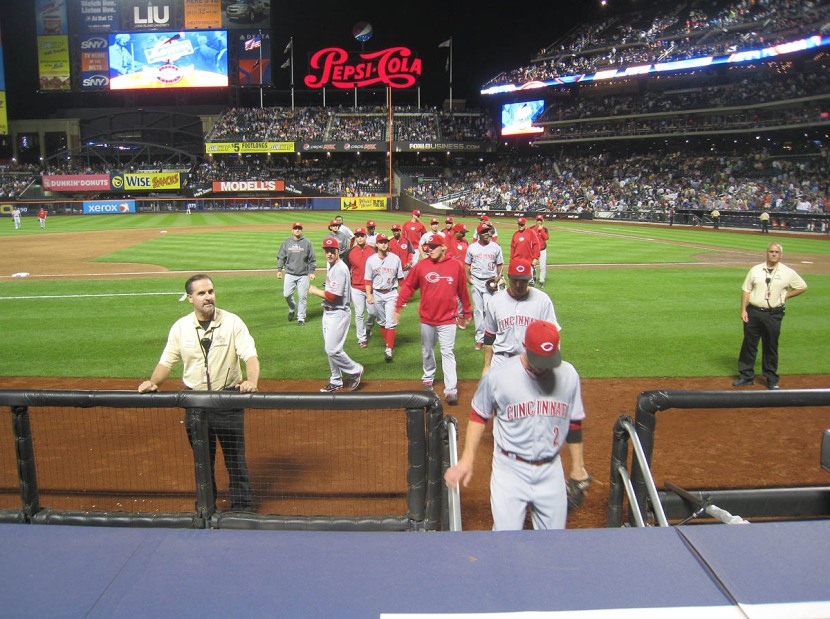 Chapman did give the ball away. Unfortunately he didn’t give it to me, so my night ended a shade below double digits. Boo-hoo, right? Life is hard.

REO Speedwagon played a post-game concert, but I didn’t stick around. Like I said earlier, I was there to watch baseball, not hear music, and by 10pm, I was so worn out from the huge crowd and strict security policies and incessant noise pollution that I just wanted to get the hell out of there.

• 818 consecutive games with at least one ball

Are you still with me? Check out the sweet spots of the six balls that I kept. As you can see, they all have “practice” stamps:

One of the balls has a faint bat imprint:

Did you see it in the photo above? It’s just below the stitches . . . above the MLB logo. It looks like the imprint contains the first four letters of the word “GENUINE.”

Finally, four of the six balls have invisible ink stamps. Here’s a side-by-side comparison of those balls in regular light versus black light: