As you may have already heard, July 2nd is going to be a VERY special day for me (and hopefully not my last). Assuming everything goes according to plan, I’m going to attempt to catch a baseball that will be dropped from a helicopter 1,000 feet high.

If I succeed, it will be a world record, albeit unofficial, as the folks from Guinness World Records declined the invitation to attend. (Whatever. Their loss.) And if I don’t succeed? Let’s not think about that quite yet. Right now the record belongs to a Hall-of-Fame catcher named Gabby Hartnett, who managed to catch a ball that was dropped from a blimp 800 feet high in 1930.

According to legend, Babe Ruth once caught a ball that was dropped from a plane flying 100mph at an altitude of 250 feet. Other players have caught — or at least attempted to catch — baseballs dropped from the Washington Monument (555 feet high), the Tribune Tower in Chicago (462 feet high), and the Terminal Tower in Cleveland (680 feet high). No one has attempted to break this record since the World’s Fair in 1939. That’s when a former player named Joe Sprinz broke his jaw and lost several teeth in a gruesome mishap; Sprinz managed to get his glove on the ball, but the force of the ball smashed his glove into his face. According to this article about him on Wikipedia, the ball was estimated to be traveling as fast as 154mph.

How do I know all of this? Because I researched it extensively and wrote about it in my latest book, The Baseball. (That’s what inspired me to attempt to break this record; check out the section called “Such Great Heights” on pages 54-58.) I also know, or at least have a good reason to believe, that

the estimate of 154mph is way off. According to The Physics of Baseball, the terminal velocity of a baseball dropped from a great height is “only” 95mph. I asked Neil deGrasse Tyson about this when I met him several months ago at my family’s book store, and he confirmed it: 95 miles per hour. Why? Because of the air resistance. (If Neil says it, it’s true. Case closed.)

Catching a baseball traveling that fast is certainly difficult, but (a) it’s within the realm of human capability and (b) I’ve done it myself. Don’t forget that I played college ball and have snagged my share of wicked line drives in the stands at major league stadiums. That said, I do plan to wear a catcher’s mask and helmet, along with a catcher’s mitt and chest protector. I’m crazy but not THAT crazy.

My record attempt is going to take place at a minor league stadium in Lowell, Massachusetts,

called LeLacheur Park. That’s the home of the Lowell Spinners — the short-season Class A affiliate of the Boston Red Sox. Jon Boswell, the Spinners’ Director of Media Relations, is totally on board with this stunt, but of course it wouldn’t be happening without approval from the Federal Aviation Administration. It just so happens that I’m friends with a guy who works as a test flight engineer for the FAA, and he’s taking care of all the logistics. His name is Mike Davison, and if you want to see what he looks like, check out this photo from my recent trip to Fenway Park. Mike is the big guy in the red shirt.

Now, just to give you an idea of the planning that’s been taking place, I’m going to share a snippet of an email that Mike sent to Jon three weeks ago:

“I will visit you next Thursday, which is my day off. I will bring a GPS so I can geomark the pitcher’s mound and second base. I will also bring the contact information for the Boston Flight standards district office (FSDO), as we need to get the briefing together and you need to give it to the Boston FSDO. Also, I need the elevation of your field above sea level.”

This stunt isn’t taking place in the parking lot of the stadium. I’m going to be standing ON the field — shallow center field, to be exact. At this point, the only thing that could prevent it from taking place is the weather. If the wind is stronger than 6 or 7 mph, we’re going to postpone it until July 3rd, and if it’s still windy on our backup day, we’ll have to postpone it for a few weeks. 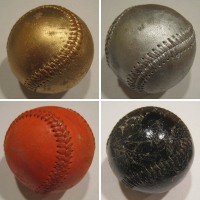 The wind, however, isn’t the only factor that we’re concerned about. If it’s raining or even foggy, we’ll have to call it off because of the lack of visibility, speaking of which . . . do you remember the mysterious blog entry that I posted several months ago with photos of spray-painted baseballs? THIS is why those balls were painted (by Mike) and mailed to me. At some point within the next week, I’m going to take those balls to the park and toss ’em in the air and make notes about which ones are the easiest to see. Ultimately I’m hoping to do the stunt with brand new Rawlings Official Major League Baseballs, but if it’s too tough to see a white ball against the white sky, then we’ll break out the colors.

Mike says that once the helicopter is airborne, the biggest challenge will be getting the balls to land near me. Because of this challenge (and to help get me in the groove), he’s going to arrange for baseballs to be “test-dropped” from various heights. First the helicopter will hover at 300 feet, at which point several softballs will be dropped. Yes, softballs. The world record for catching a softball from the greatest height is only 200 feet, so we’re going to try to get that record out of the way first. Then the helicopter will rise to 500 feet . . . then 750 . . . and finally 1,000. Approximately five test balls will be dropped from each of those heights. I won’t try to catch those. I’ll simply stand aside and watch where they land. Hopefully they’ll all come down in roughly the same spot. Then I’ll move to that spot for the actual attempts. To clarify, the plan is for me to attempt to catch a baseball from each of those three heights: 500 feet, 750 feet, and 1,000 feet.

Because I won’t be able to see the balls when they’re dropped, Mike is going to stay with me on the ground and communicate with the people in the helicopter. They’ll let him know when they’re dropping each ball, and he’ll let ME know. He plans to be as far away from me as possible, but within shouting distance.

I don’t think I’m going to die, but I’m concerned about breaking my hand. Nevertheless, I’m going to proceed and hope for the best. If I can catch the balls in the pocket of my glove, I should be able to emerge from this stunt uninjured. Afterward, whether I’m successful or not, I plan to donate all the balls and catcher’s gear to Pitch In For Baseball.

I’m mainly doing all of this for fun (and because I’m nuts and because I want to have permanent bragging rights), but also because it’ll be good for the charity — and hey, if the stunt helps to sell a few extra copies of my books, that’ll be nice too, especially considering that I’ll be shelling out $1,500 of my own money for the helicopter. Renting it (along with a pilot) costs $500 per hour, and I’m going to need it for a minimum of three hours, so if anyone has ideas about how I might be able to find a sponsor, speak up!

Earlier today, while walking through midtown Manhattan after work, I looked up at the tallest buildings and tried to imagine catching baseballs being dropped from the tops. Here’s one . . . 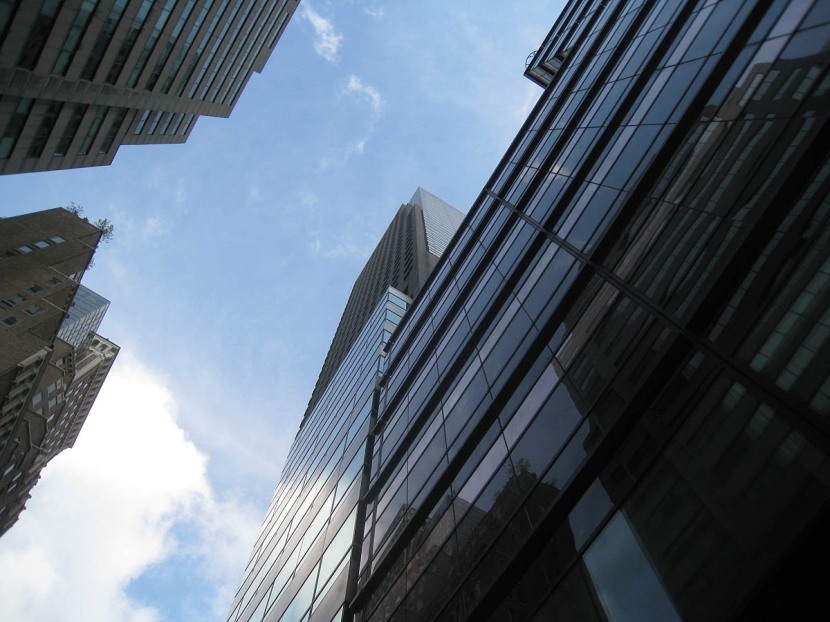 What do you think? That doesn’t look like it’d be hard, does it? Just take those two buildings and stack them on top of each other and voila! One thousand feet!

The helicopter stunt is scheduled to take place on a game day for the Lowell Spinners, but not when the stadium is open to the public. The game is scheduled for 7:05pm, but I’ll be attempting to make history from 6am to 9am. According to Mike, that’s when the wind will be calmest, and also, it wouldn’t be safe to do this with the stands full of people. I might bring a few friends with me, and my terrified mother is thinking about being there, but whoever joins me will be kept in the dugouts (which are covered). I’m not sure if anyone else (other than the media) will be allowed to attend.

That’s it for now. I’ll post an update if anything changes, and in the meantime, I’d love to hear your thoughts.