I had four goals at this game:

1) Snag one of the new Marlins commemorative balls.
2) Talk to Heath Bell (whom I’ve known for years).
3) Catch a game home run ball on the party deck.
4) Take advantage of (and photograph) the free food.

The day got off to a good start when Jon Niese tossed me this within the first minute of batting practice:

As you can see in the photo above, I was the only person there, so in order to create a little excitement, Niese had thrown me the ball with a bit of flair. Rather than making eye contact and under-handing it, he turned his back and faced away from me and and made a no-look flip over his right shoulder. The ball didn’t quite have enough oomph on it, so I had to reach two feet over the railing to make the catch.

The way I got my 2nd ball was much more fun. Mets coach Tim Teufel was patrolling the outfield with a fungo bat, so when he wandered near me to retrieve a ball, I called out and asked him to hit me a fungo. (For those who don’t know, Teufel is a former player who was on the Mets’ championship team in 1986, so therefore he was one of my childhood heroes.) Teufel responded by attempting to hit one to me from about 50 feet away, but the ball fell short and thudded off the padded wall below. He then tried again. And again. But each time, instead of lofting a gentle pop-up in my direction, he accidentally hit a line drive into the wall. After his third attempt, he picked up the ball and threw it to me — and here it is:

Then the food service got underway. The first thing I got was a bag of peanuts:

I didn’t eat it. I tucked it in my backpack “for later” and ended up taking it home. Did I feel guilty? Hell no. I’d paid $100 for my ticket and was determined to get my money’s worth.

The Marlins took the field at around 5:30pm, and whaddaya know — Heath Bell was the closest player to me. You can see him in the following photo, following through on one of his throws: 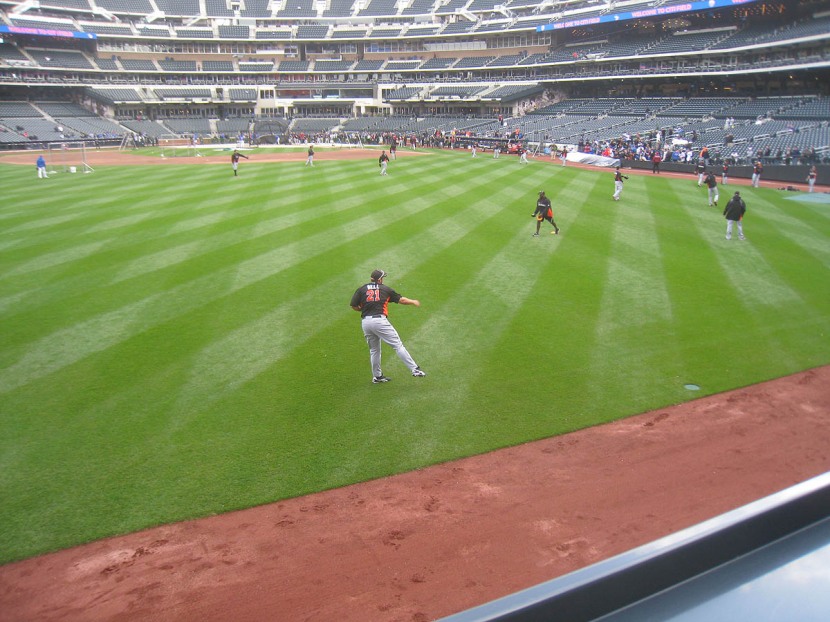 When he got a bit closer, I said, “Mister Heath Bell, sir, welcome back to Citi Field.”

He didn’t look up, but I saw him smile and knew that he recognized my voice, so I added, “Happy twenty-twelve to you. It’s nice to see you again.”

Bell then looked up and gave me a mini salute.

I was wearing a teal Marlins cap with the old logo, and several minutes later (after he’d finished throwing), he called me out on it. He looked at me (from about 75 feet away), pointed at his cap, and then pointed at me and shrugged.

“Not as ugly as THAT!” he yelled, pointing again at the monstrosity on my head.

He had a point.

My 3rd ball of the day was tossed by Mike Dunn in left-center (all the way out near the Home Run Apple) and my 4th ball was thrown by Austin Kearns in straight-away left. Neither of these two balls had the Marlins commemorative logo.

Four days earlier, the party deck was virtually empty throughout BP. Yesterday, for some reason, there were dozens of people. This was the view to my right . . . 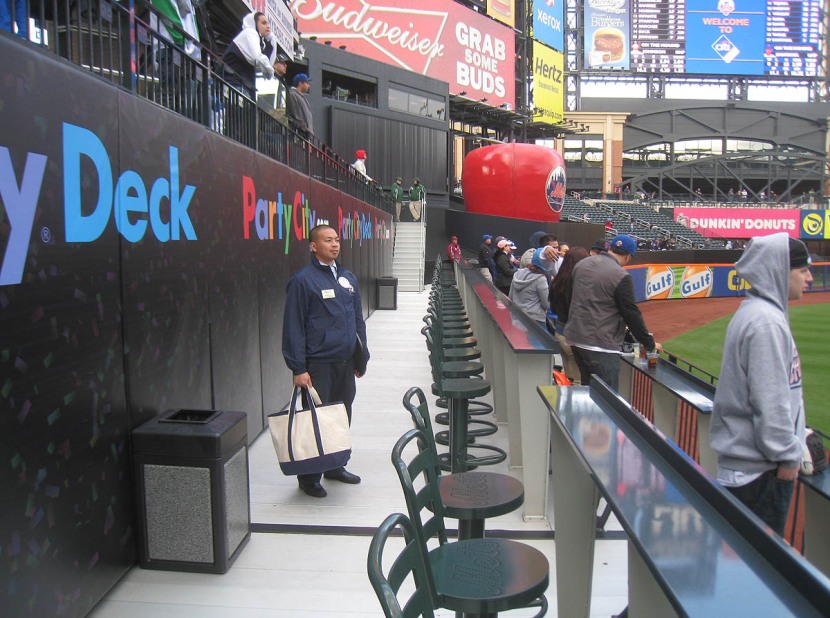 In the photo above, do you see the guy holding the canvas bag? That bag contained peanuts, as well as popcorn and potato chips. In the party deck, the food isn’t sitting out for people to take; employees make regular sweeps through the section and hand it out.

Toward the end of BP, Heath Bell walked over to say a more formal hello. When he got really close, I reached down over the railing, and he jumped up to give me a high-five. He asked how I’ve been and what I’ve been up to. I told him a few quick things and mentioned that I was hoping to get one of the balls with the Marlins commemorative logo.

“Man, that’s all we use during BP at home,” he said, so I told him that I’m going to be at Marlins Park next month for the Rockies series.

(HEATH BELL IS AWESOME, AND I LOVE HIM.)

That was it for BP. Four balls. All thrown by players and coaches. Not a single home run anywhere near me. Bleh.

I made it to the Marlins’ dugout at the end of BP and noticed that the basket of balls was left out on the warning track:

I zoomed in with my camera to see if there were any commemorative logos:

Two photos above, did you notice the little kid with a glove? Well, I noticed him while I was standing there, so I asked him if he’d gotten a ball, and when he said no, I handed him one of mine. Moments later, Marlins owner Jeffrey Loria poked his head out of the dugout, prompting everyone to start shouting at him for baseballs. He grabbed half a dozen from the basket and tossed them into the crowd. I snagged one.

Shortly before game time, there was a Jose Reyes media frenzy in front of the dugout, so I tried my best to phot0-bomb him. See how all the cameras are pointed at me (okay, fine, HIM) in my photo below?

It was Reyes’s first game at Citi Field after having left the Mets in the off-season, so that’s why everyone was going nuts.

At 6:30pm, hot food started being served on the party deck, but I didn’t make it out there until the game was about to begin. This was my view (and food) in the bottom of the 1st: 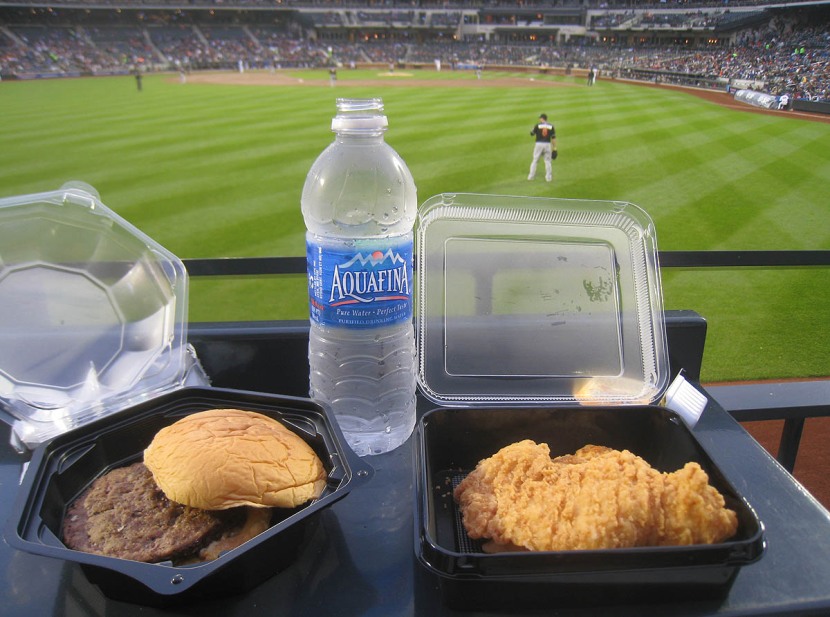 It’s kind of hard to tell in the photo above (because the cheese had been placed on the bottom portion of the bun for some unimaginable reason), but that *is* a cheeseburger on the left. It was as good as it looks, which is to say: not very. It was cafeteria-quality. The water was nice and cold, but the server removed the bottle cap (so that I wouldn’t fling it onto the field) (because that’s what kind of person I am). Really annoying, Mets. Really really REALLY annoying. And as for the chicken tenders on the right, those were pretty good, but for the hundred dollars that I’d spent, I expected the server not to run out of barbeque sauce.

Wanna see what else was annoying? Mr. Met blocking the cross-aisle . . .

. . . not that it mattered because Johan Santana and Josh Johnson were locked in a pitchers’ duel.

For the next round of my “free” meal, I got a hot dog:

It was okay. No real complaint. I actually think hot dogs are gross, but I simply had to eat one.

Just before the hot food stopped being served at 8:10pm, I got another cheeseburger: 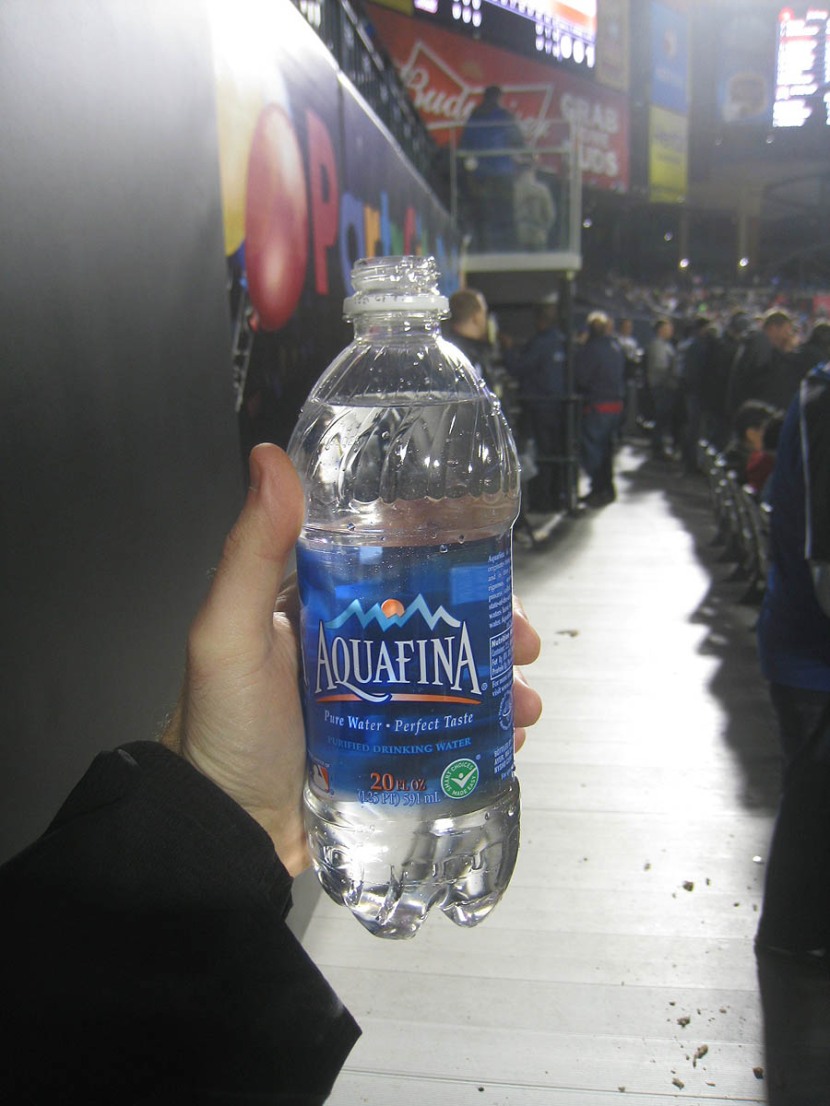 I had such high hopes, but perhaps should have known better. Not only was the pretzel absurdly small . . . 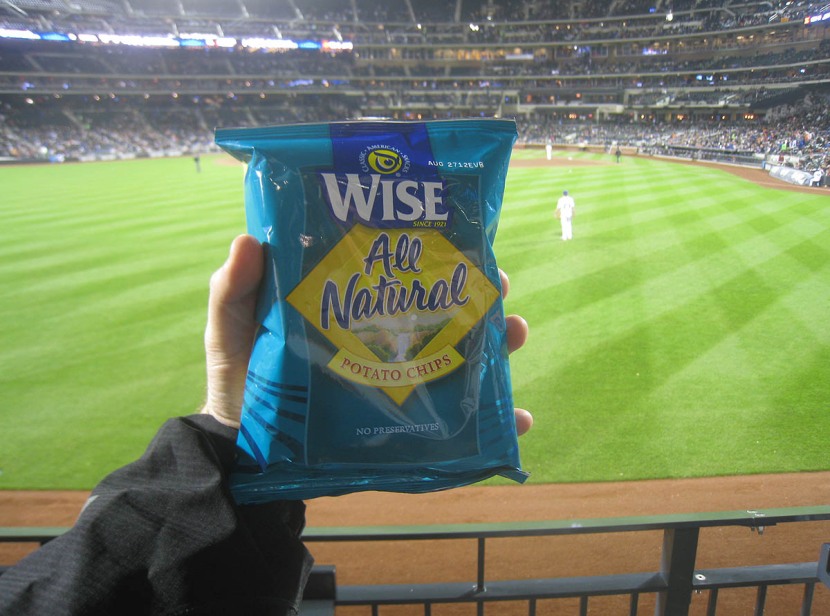 I put both of them in my backpack with the peanuts. 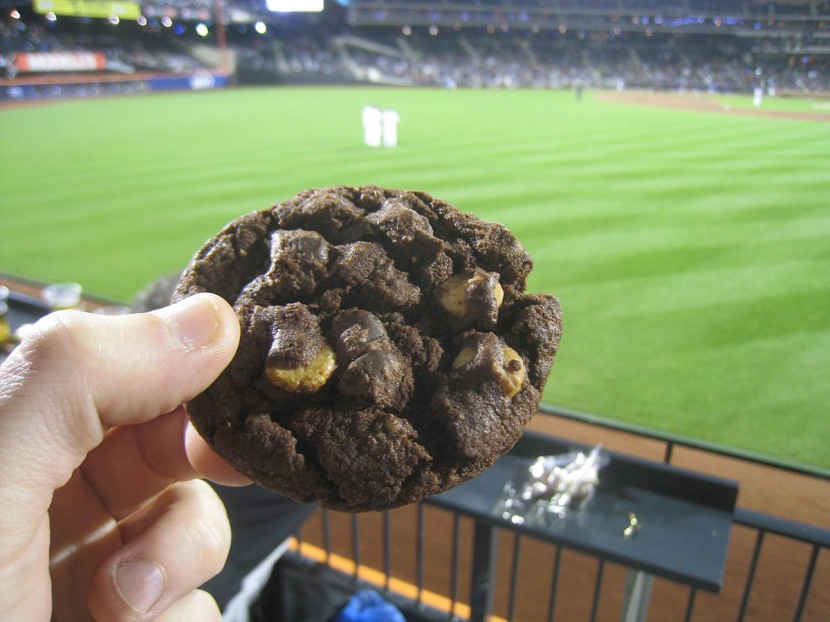 It was a chocolate cookie with white chocolate chips. Very tasty but too hard — and I know cookies. The absolute best cookie place in the world is in my neighborhood on the Upper West Side. No, I’m not talking about Insomnia Cookies (which is excellent, by the way). I’m talking about the life-changing cookies at Levain. Go there and get some. They’re not cheap, but they’re huge, and you will thank me. Your perception of cookies (and, if you’re religious, of heaven) will never be the same. But back to Citi Field . . . the servers ran out of cookies after one sweep through the party deck. They blamed it on the fact that that everyone took two or three, and fine, okay, I’ll admit that I had taken three, but so what? For one hundred dollars (and having to watch a team of fragile players that can’t hit), I expect to have an unlimited supply of sugar. I had been told that the party deck was “all you can eat,” but it wasn’t. Certain things were only served at certain times, and other items ran out. Lame!

There was also “free” beer, which somehow didn’t run out. Here’s the beer station in action: 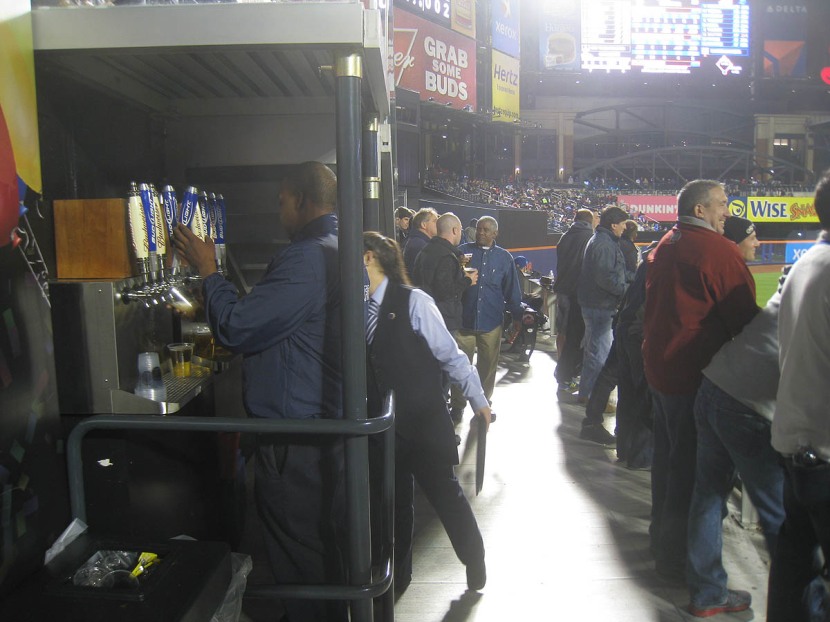 As I’ve mentioned in the past, I’m not much of a drinker, and I have absolutely no interest in beer. Go ahead and make fun of me for “not being a man.” I don’t care. Peer pressure is for babies. I just don’t like it and never will. For me, free beer is about as appealing as free cod sperm or free raw shark heart. So in that sense, I didn’t get my money’s worth on the party deck.

Late in the game, I went to the top of the stairs to take a few photos from above. This was the view to my right: 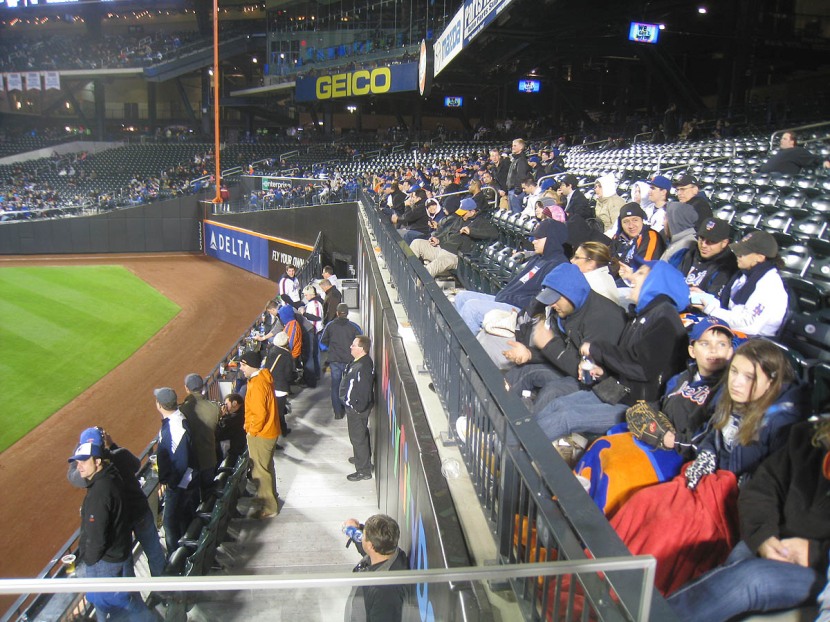 This was the view to my left:

And here’s what it looked like directly below me:

The Mets ended up winning the game, 2-1, and look who I ran into on my way out:

In the photo above, that’s my friend Ben Weil on the right, giving his subtle critique of the stadium.

• 801 consecutive games with at least one ball

• 548 consecutive games in New York with at least one ball

• 388 consecutive Mets home games with at least one ball

• 50 consecutive games at Citi Field with at least two balls

Remember the commemorative ball that I got from Tim Teufel? Well, here’s a side-by-side comparison of the ball in regular light and black light: 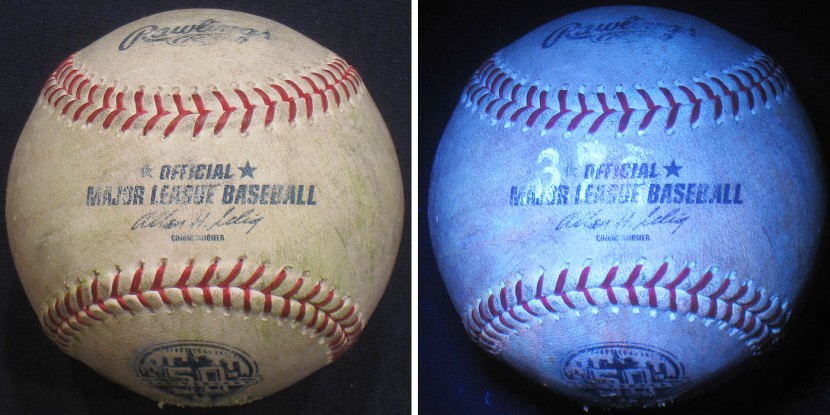 You don’t see many baseballs with invisible ink stamps right on the logo.

And finally, in case you missed my tweet this morning, check out this nonsense about me on MSN. Yet again, the media have gone for the low-blow rather than doing a thoughtful, positive story that mentions my charity fundraiser. Thankfully (and not surprisingly) my publisher got it right when they posted this about me yesterday.