You know how I’ve been raising money for charity for the last three seasons? Well, I’m going to be doing it again in 2012, so for those of you who already know the drill and feel like contributing, here’s the direct link to make a new pledge. For those of you who have no idea what I’m talking about, the charity is called Pitch In For Baseball, and it provides baseball and softball equipment to underprivileged kids all over the world. Quite simply, I’ve been getting people to pledge money for every ball that I snag over the course of the MLB season, and by the time the World Series ends, the money really adds up. Click here to read more about it on my website.

A friend of mine (who wishes to remain anonymous) recently mailed me two random/awesome pieces of memorabilia. He suggested that I give them away as prizes after the season to people who donate money. Let me show you the items, and then I’ll explain how it’s going to work. Here’s the first one — a ball signed by Edgardo Alfonzo . . .

. . . . but not ANY old ball. This was Alfonzo’s 6th home run of the 2004 season, and as you can kinda see, it comes with a ticket from the game. My friend caught this ball. Here’s another photo of it from the other side:

The other piece of memorabilia is a used/signed bat by Alfonzo — not the actual bat that hit the home run, but still pretty cool. Here’s a photo of it . . .

Anyway, here’s how prize/raffle situation is going to work . . .

For every penny per ball that you donate to my fundraiser in 2012, you’ll get your name thrown into the hat. (Or box. Or whatever container I end up using.) In other words, if you donate five cents per ball, your name will be in there on five different slips of paper. Ten cents per ball equals ten slips of paper. And so on. The way I see it, it wouldn’t be fair for someone who donates one penny per ball to have the same chance of winning as someone who donates a dollar per ball.

I’ve never done anything like this, so I’m open to suggestions. Should I bundle the Alfonzo items as one prize, or should they be kept separate? Perhaps I’ll throw in a signed copy of The Baseball as a prize. Perhaps someone else will donate something that can be offered.

Note that simply pledging money will not get you into the drawing; only the people who actually donate money at the end of the season will be eligible. I’m thinking that the cut-off for donations will be December 1, 2012. That’ll give everyone a full month to settle up with Pitch In For Baseball after the World Series. Then I’ll start giving away the prizes. Whoever’s name is picked first will get first choice — and will NOT be eligible to win another prize.

Again, this is just how I’m envisioning it, so talk to me. Leave a comment and speak your mind. If there are conflicting opinions, I’ll attempt to take a vote, but ultimately I have the final say. This is meant to be fun so let’s play around with the idea and raise lots of money in the process.

Here’s another prize — a ticket stub from the Opening Series in Japan . . . 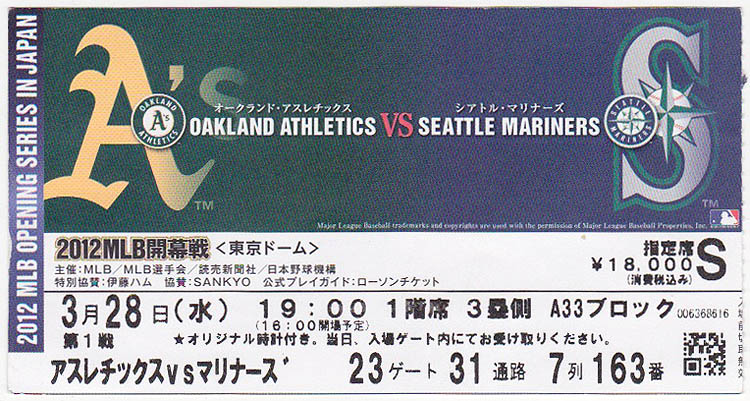 On 7/2/12 at LeLacheur Park, I got my hands on two Dom Dimaggio Bobbleheads, and I’ve decided to give them both away. Each one will be a separate prize. Here’s what they look like:

If you donate money, you’ll be eligible to win this amazing Bernie Williams compact disc (brought to you by Kraft) titled “The Journey Within” . . .

. . . but if you’re one of those miserable human beings that doesn’t like music, then perhaps you’ll prefer this authentic signature of Hall of Famer Billy Herman: