Last night, while getting ready for bed at 2am, I heard that the NYPD was raiding Zuccotti Park and kicking out all the Occupy Wall Street protesters — so I headed down there. This was as close as I managed to get . . . 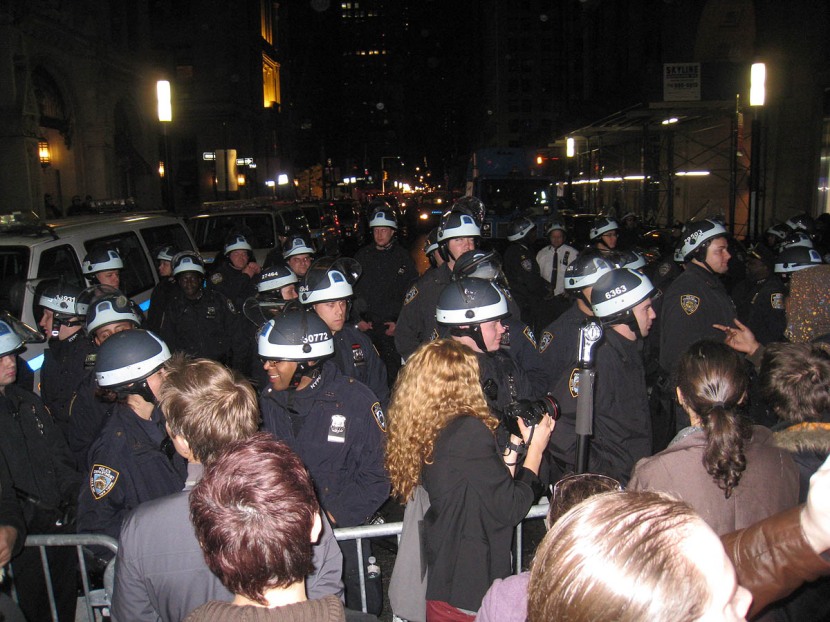 . . . which of course wasn’t close at all. Lower Manhattan was like a military zone. There were cops in riot gear everywhere, and the area surrounding the park was completely blocked.

For the record, I support the Occupy Wall Street movement — it’s kind of hard not to — but I’m not an active participant. I’d only been down to Zuccotti Park twice since the whole thing started, and even then, my main goal for being there was simply to check out the scene.

Anyway, by the time I got there last night, things were relatively calm. Despite all the riot gear and barricades and hundreds of chanting protesters, the police seemed relaxed — a little bit too relaxed: 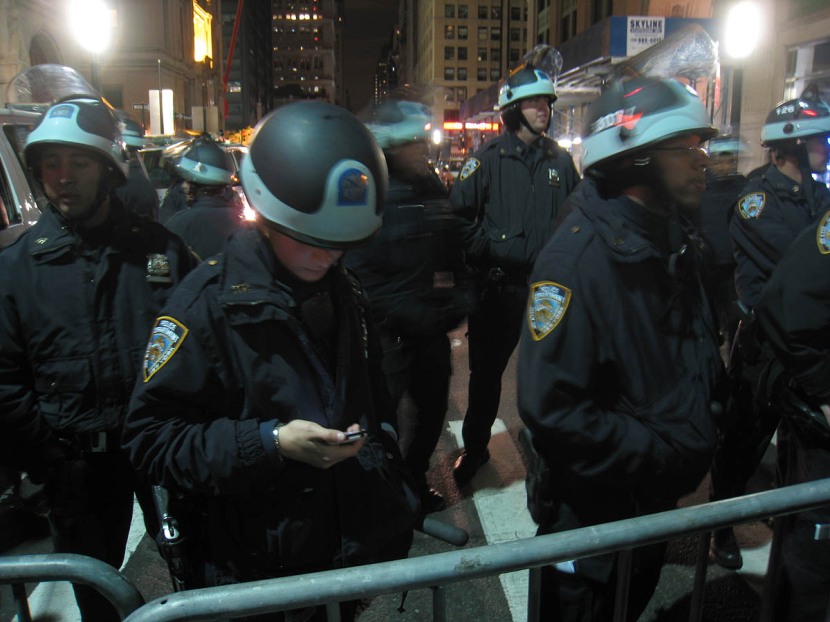 Yeah, great time to read a text from your best friend.

Now, as I said a moment ago, I wasn’t really there to participate, but when a NYC garbage truck (containing the bulldozed remnants of Zuccotti Park) approached the other side of the barricade and everyone around me started shouting and linking arms, I had no choice but to join them. The plan was to form a human barricade and prevent the truck from getting through. And it worked. Presumably, the truck ended up reaching its destination, but while it was held up and being forced to turn around, the message was delivered: “SCREW YOU!!!”

I won’t lie. It was scary to be staring down a hundred cops in riot gear while a 20-ton garbage truck crept toward me, but whatever. I was there, so I held my ground with everyone else and hoped that I wouldn’t get (a) run over or (b) arrested.

Five minutes after the truck turned around, I found a great place to stand and watch the action: from the top of a phone booth. Check out the view: 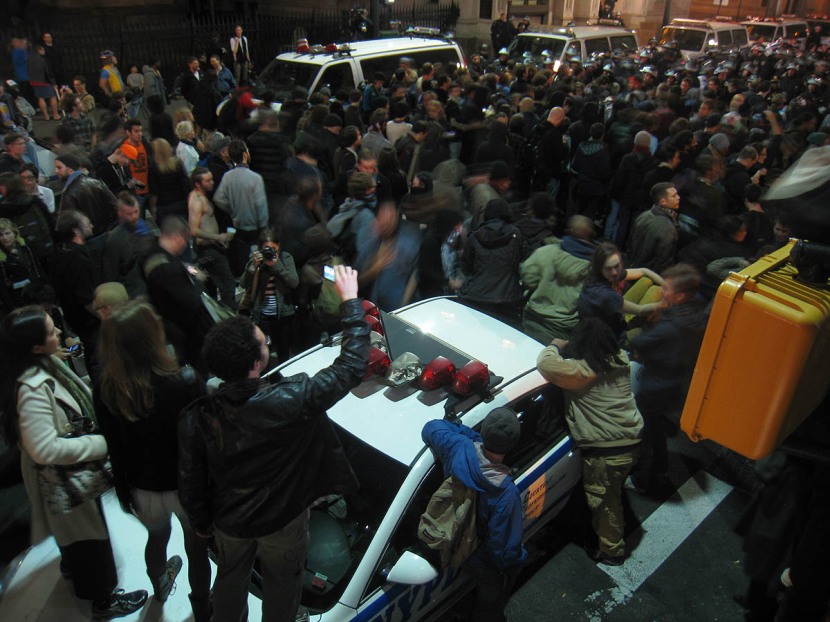 Yes, those are civilians standing and sitting on top of a police car. Things were starting to get a bit out of hand, and I could tell that something big was about to go down. I just hoped that in the process of documenting the action, I wouldn’t get hit with a rubber bullet.

Here’s another photo that I took from the top of the phone booth: 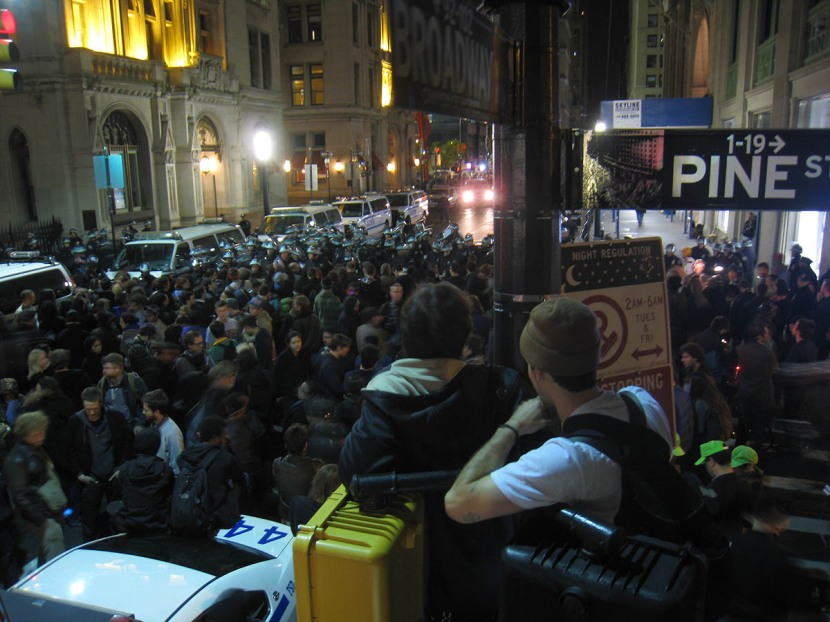 At around 5am, a police lieutenant grabbed a megaphone and announced that everyone in the street had to move to the sidewalk, or else they’d be arrested. Hardly anyone budged, and it was clear that there was about to be a major confrontation. This was the result:

It felt really weird to be up there, looking down at the mayhem. On one hand, I felt extremely close and connected to it, but on the other hand, I felt safe and protected and partially removed from the whole thing. I would’ve kept filming, but as you can see (if you watch the video right up until the end), one of the cops was yelling at people to get down. As soon as I heard that, I turned my camera off, and with the help of some people standing near the phone booth, I quickly climbed down. (For a moment, it was like I was crowd-surfing.) It’s a good thing I moved so fast because ten seconds after I got down, some other guy who was standing right near me on another elevated platform got yanked off by the cops and dragged into the street to be arrested. TEN SECONDS!!! Maybe even less. I mean, by the time my feet touched the pavement, this other guy was getting hauled off. I’ve never been arrested or even gotten a speeding ticket, so this was a pretty big deal for me. (Getting ejected four times from Shea Stadium in the 1990s and being threatened with trespassing if I ever returned is probably the worst I’ve ever gotten in trouble.)

After the street was cleared, the police threatened to arrest us if we didn’t clear the sidewalk: 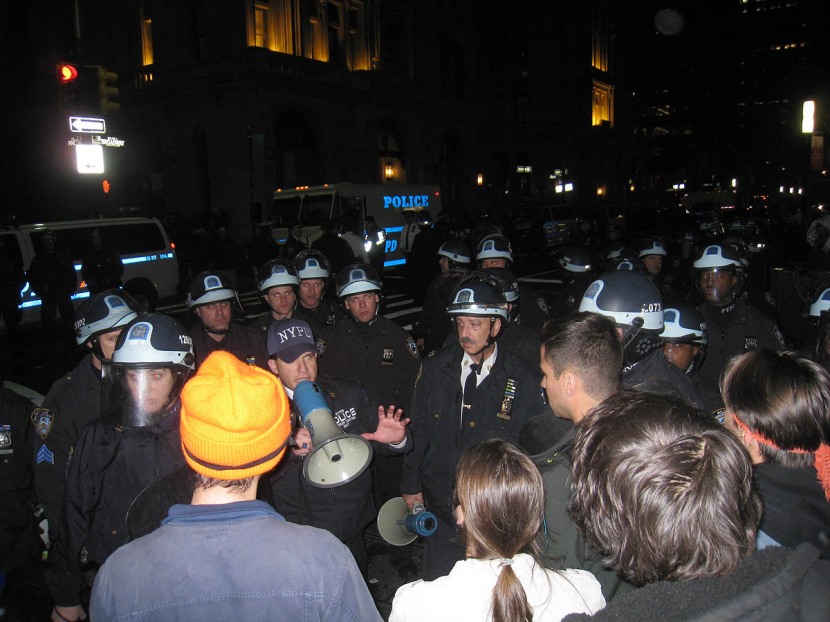 I’m no constitutional lawyer, so I might be missing something, but it seemed that our Right to Assemble was completely violated by the NYPD. Can anyone shed some light on this? And did I mention that there were cops EVERYWHERE? 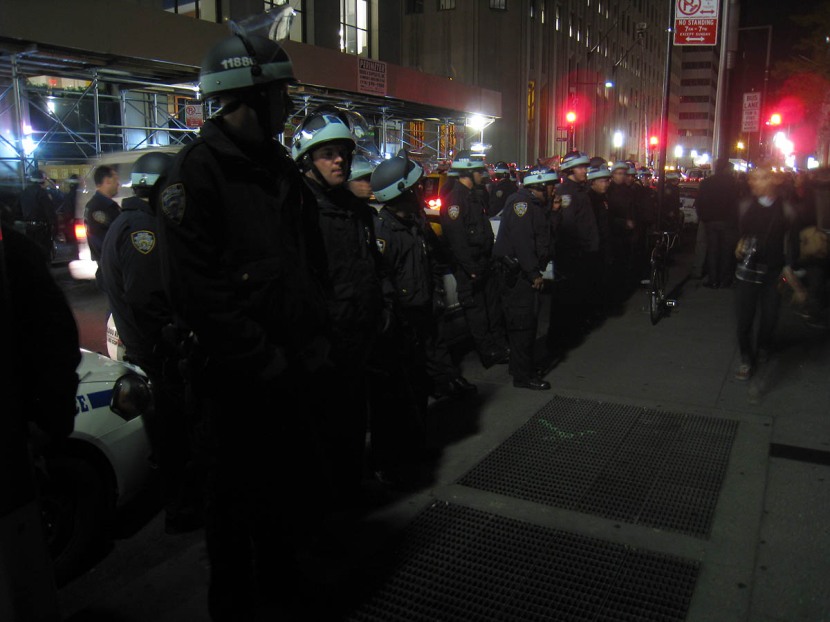 Some of the cops had serious attitude. One cop in particular was exceptionally rude to people who said anything to him. People obviously weren’t happy about how they’d been treated, and whenever anyone complained or cited the constitution or whatever, the cop would simply say, “Thank you. Good night. Go home.”

The crowd eventually dispersed, and by the time the sun came up, there was a general assembly taking place several blocks away at Foley Square: 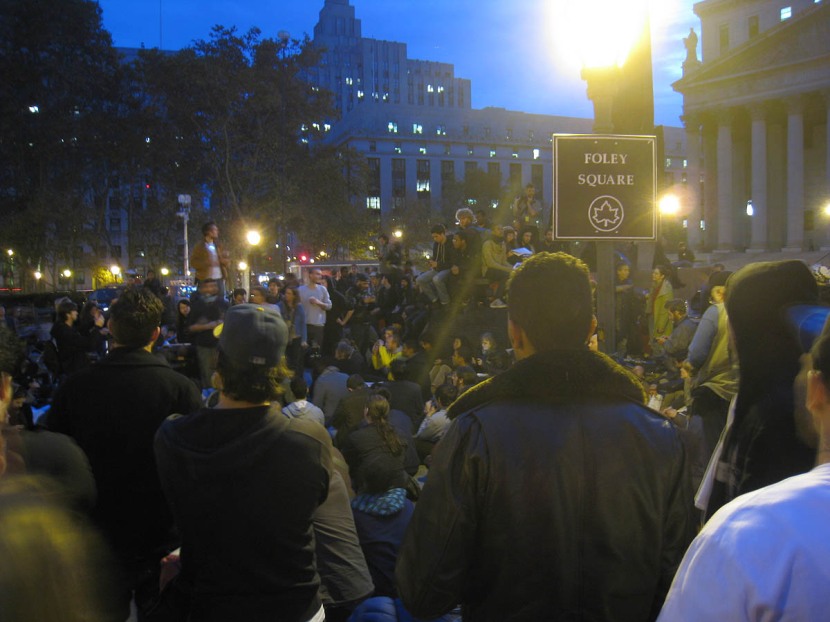 Of course there were a ton of cops (and news vans): 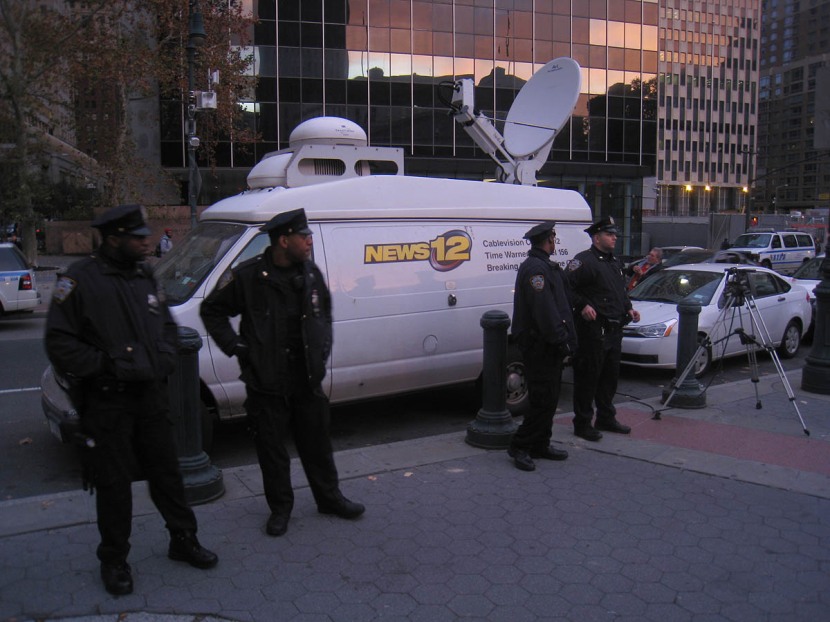 The topic of the assembly could be summed up as follows:

It would’ve been great to stay and be a part of it, but it was 7am, and I was about to collapse, so I headed home.

Not really sure what to make of all this Occupy Wall Street stuff. I’ve never been terribly interested with politics, but I’m VERY curious to see how this is going to play out . . .