As a baseball fan without a favorite team, I was thrilled when the Yankees and Phillies got knocked out of the playoffs, but as a ballhawk from New York City, I suddenly had to make a big decision: take a road trip or call it a season.

Given the fact that (a) I’d been hoping to attend at least one game during each round of the postseason and (b) every additional ball I snagged would extend the single-season record, I decided to go for it.

Where did I end up? Have a look at the fans below:

Yeah, Comerica Park. And it was raining. Here’s what it looked like inside the stadium: 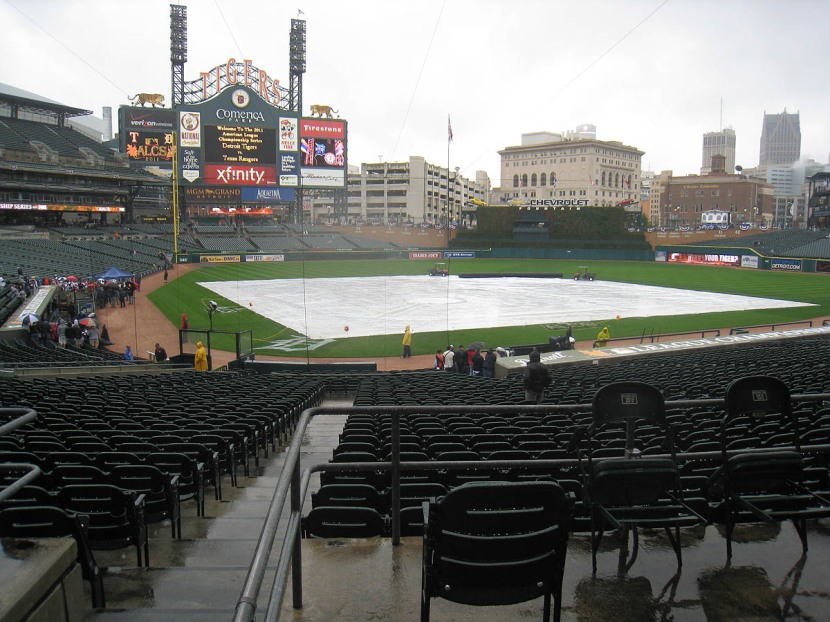 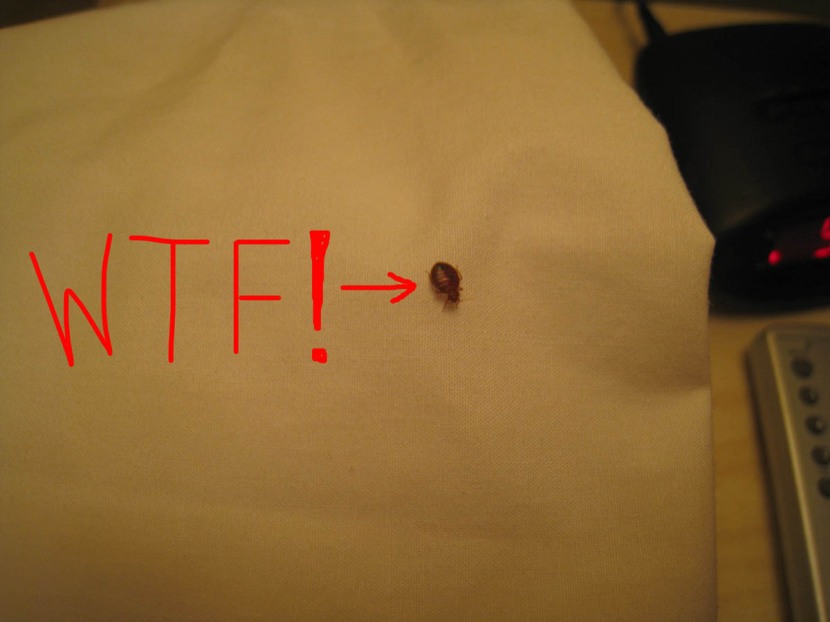 For the record, Ben and I switched rooms/floors, slept without incident, discovered another bedbug the following night, immediately checked out (of the Quality Inn in Romulus, Michigan), got a full refund, and used the money to get an excellent room at a nearby Holiday Inn.

Anyway, Ben and I had bought standing-room-only tickets on StubHub. The good thing about them is that we got to hang out in the cross-aisle behind home plate for the entire game. Take another look at the photo of the tarp (two photos above). That was our view all day — and I do mean ALL day. The bad thing about having standing-room-only tickets is that in order to keep our spot, one of us had to stay there at all times. Here’s a photo of Ben (wearing the Rangers hat) holding it down: 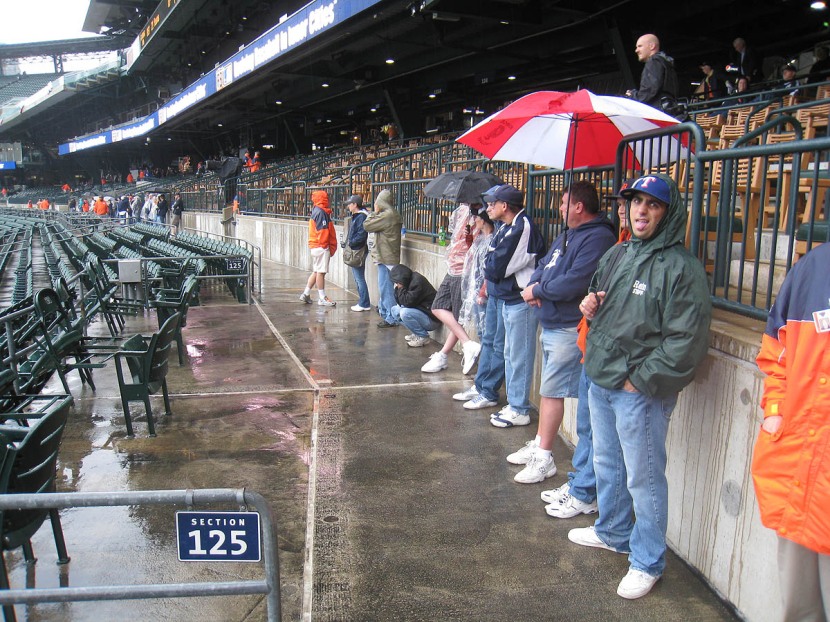 Comerica Park had opened a little more than two hours before the game was scheduled to begin, and for the first hour and a half, there was NO action on the field.

I started getting nervous about my streak. Really really nervous. I’d snagged at least one ball at every game I’d been to since September 10, 1993 — 788 consecutive games, to be exact — and now what? Was the game going to start on time? Were any players going to come out and play catch? Rain or no rain, I knew that the stadium would be packed. And what about security? I assumed that once the game started, all the ushers were going to clamp down and check everyone’s tickets. How was I going to make it down to the dugout or to the bullpens? Was I going to have to catch a foul ball during the game in order to keep my streak alive?

Finally, when it felt like the universe was really out to get me, two Rangers walked out of the dugout and began playing catch in shallow right field.

I took off for the right field foul line, and when I got there, this was what I saw: 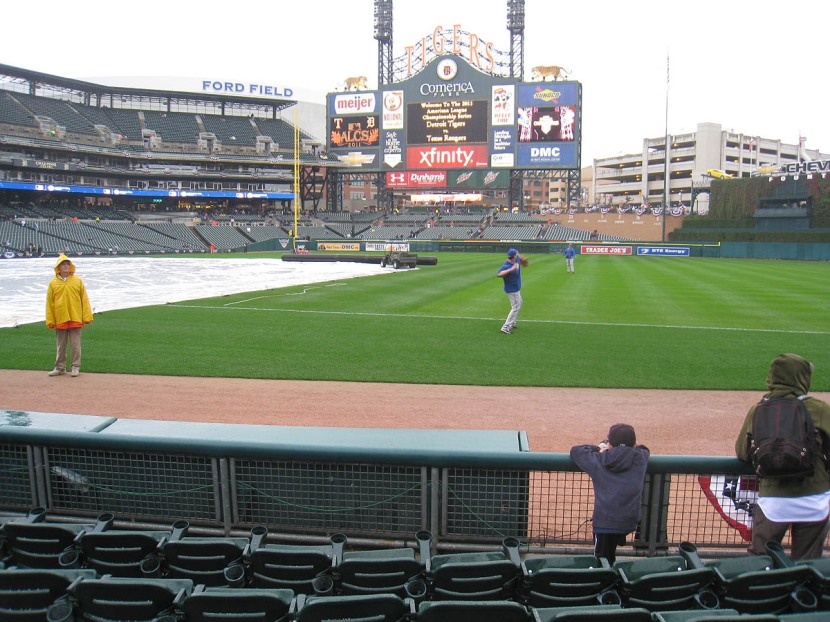 Colby Lewis (the player about to throw the ball in the photo above) was playing catch with C.J. Wilson. I hung back several rows, and when they finished, I got Wilson’s attention by shouting and waving my arms like a madman. He then chucked the ball to me (from about 75 feet away), and when I caught it, I felt a profound sense of relief. Here’s a photo of the ball… 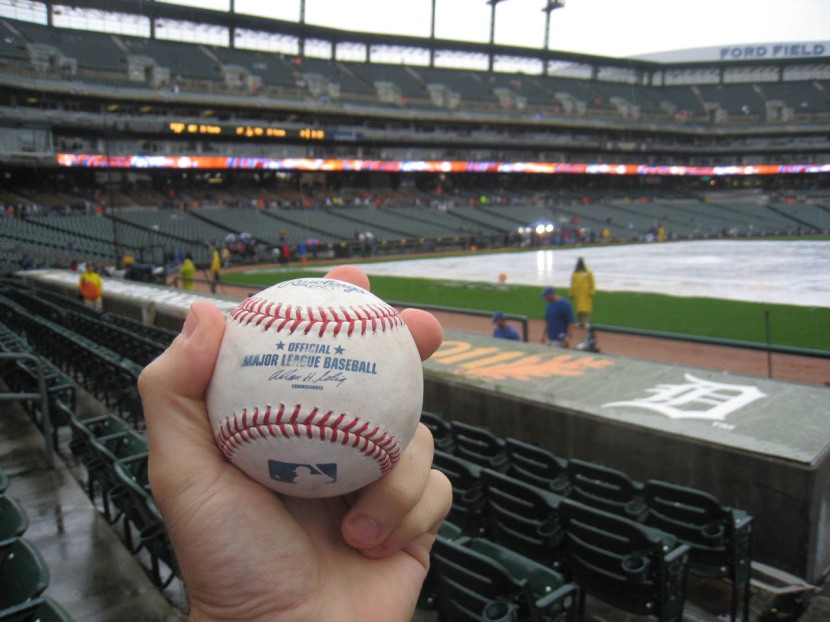 …and here I am showing Ben how I felt:

I still desperately wanted to snag one more ball (but not AS desperately); the last time I’d left a stadium with just one ball was at the 2007 All-Star Game — a streak spanning 313 consecutive games. That said, when the rest of the Rangers pitchers came out to throw, I stayed in the cross-aisle so that Ben could try to get a ball, and let me tell you, it was painful to be so far from the action. Here’s a photo of Ben (inside the red circle) heading out to the right field corner:

He was wearing a bright red Rangers jersey (with “HAMILTON 32” on the back), so we both figured that he’d get a ball pretty quickly. Assuming that happened, the plan was for him to hurry back so that I could then run over and try to get another ball.

As each pair of pitchers finished throwing, I saw them toss the baseballs to other fans. I felt terrible for Ben (who just wanted to get *one* ball at this playoff game), and as his chances kept slipping away, mine went down too. As it turned out, Ben didn’t get anything from the Rangers and returned empty-handed.

The game was scheduled to begin at 4:19pm, but because of the rain, there was a two-hour and 13-minute delay. Thankfully, our standing-room spot was barely covered by the overhang of the upper deck, but we still got kinda wet. Worse than that, though, was having to stand all day. Here’s a photo of us in the cross-aisle:

With a few breaks here and there, Ben and I ended up standing in that spot for NINE hours.

At around 5:15pm, it stopped raining. Half an hour later, the grounds crew removed the tarp… 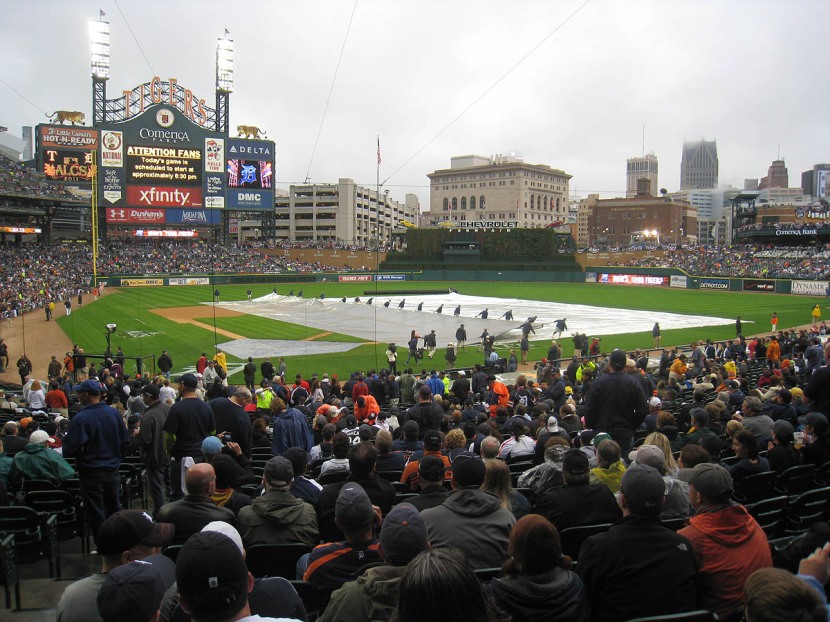 …and half an hour after that, several Tigers position players began throwing in shallow left field. Even though Ben hadn’t yet gotten a ball, he *had* gotten a bunch of opportunities from the Rangers, so he agreed that it was my turn to try to get another.

With a great deal of effort, I worked my way down to the front row… 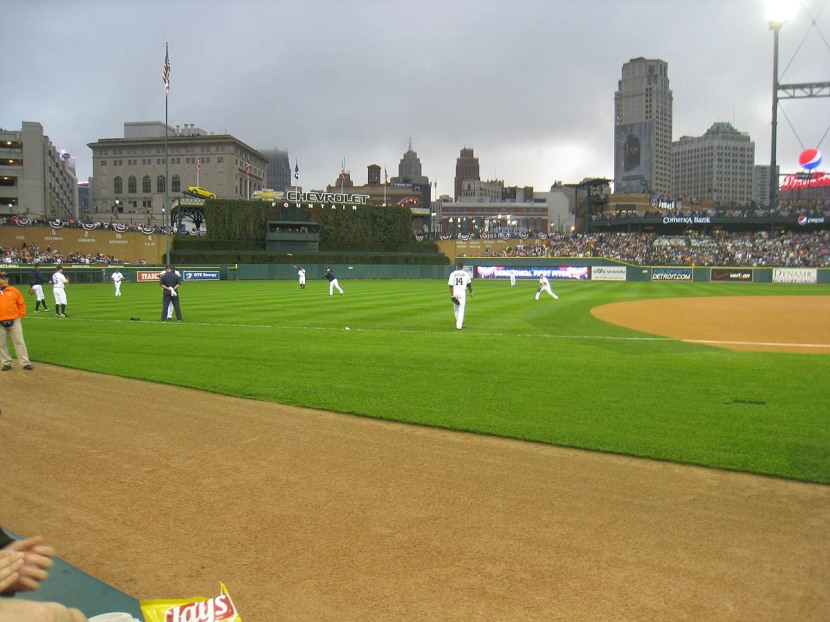 …and not surprisingly, I didn’t come close to getting a ball. Ben, meanwhile, had to watch helplessly from the cross-aisle as two pairs of Rangers played catch in front of the 1st base dugout. It was a ballhawking nightmare, and when the game finally began at 6:32pm, things weren’t looking good. He still hadn’t snagged a ball, and I only had one.

During the 1st inning, Ben and I talked about going down to the Rangers’ dugout, or at least trying. Even though this was a playoff game, the players were still going to be tossing 3rd-out balls into the crowd, so why not give it a shot, right? That’s how I felt, but for some reason, Ben wasn’t totally into the idea, so he hung back and watched my backpack.

With two outs in the bottom of the 1st, I headed toward the dugout, and when I reached the staircase that I thought was best, I turned left and walked down it. Just like that. The usher was talking to someone and had his back turned, and since it was so early in the game, I managed to find an empty (and totally wet) seat in the 6th row. I wish I could show you a photo of my view, but like I said, Ben had my backpack, so you’ll have to take my word for it. I was really there, and this really happened: Victor Martinez, batting right-handed against Matt Harrison, got under an 0-2 pitch and hit a towering pop-up to the middle of the infield. Shortstop Elvis Andrus made the catch, jogged back toward the dugout, and tossed me the ball. Just like that.

I felt like a million bucks. And things got better from there.

By the third inning, a steady mist was falling. Here’s what it looked like from our spot in the cross-aisle:

Around that time, I realized that Lou Whitaker was sitting directly behind me. Several other fans requested his autograph and asked to have their picture taken with him, but I just let him be. I knew I had to do something, but I didn’t want to bother him, and I needed some time to think. Around the bottom of the 4th inning, the woman on my left asked if I was going to get him to sign anything.

“Nah,” I told her, “I don’t really go for autographs.” Then I paused for a moment and added, “I want to catch a foul ball and get a fist-bump from him.”

With two outs in the bottom of the 5th, Ryan Raburn stepped to the plate, swung at the first pitch, and sent a foul ball shooting back in my direction. Without even thinking, I quickly moved forward and darted several steps to my right and jumped and made the catch and got high-fives from everyone around me, including Mister Whitaker. Here’s a photo of the ball…

…and here I am getting that fist-bump:

(See all those white blobs and speckles in the photo above? Those are raindrops reflecting the light from my camera’s flash.)

Catching that ball was pretty damn exciting, but it didn’t really surprise me. You might recall that I caught two foul balls during the game on 9/11/11 at Comerica Park, so this just kinda felt like an extension of that. At Comerica, the cross-aisle behind the plate is one of the best places to catch foul balls in the majors, so I wasn’t merely hoping to get another; I was expecting it, and when it first started flying back toward me, I simply knew that I was going to catch it.

The game itself was a thriller, and OF COURSE it went into extra innings. I mean, we’d already been there all day, and our feet were already clammy and numb, so hey, why not? With the score tied, 3-3, Josh Hamilton led off the 11th inning with a double to right field off Jose Valverde. Adrian Beltre drew a one-out intentional walk, and it backfired; Mike Napoli followed with an RBI single to center, and Nelson Cruz put the game away (and gave the Rangers a 3-1 series lead) with a three-run homer to left-center. Final score: Rangers 7, Tigers 3.

After the game, there was a whole lot of activity on the field in front of the Rangers’ dugout: 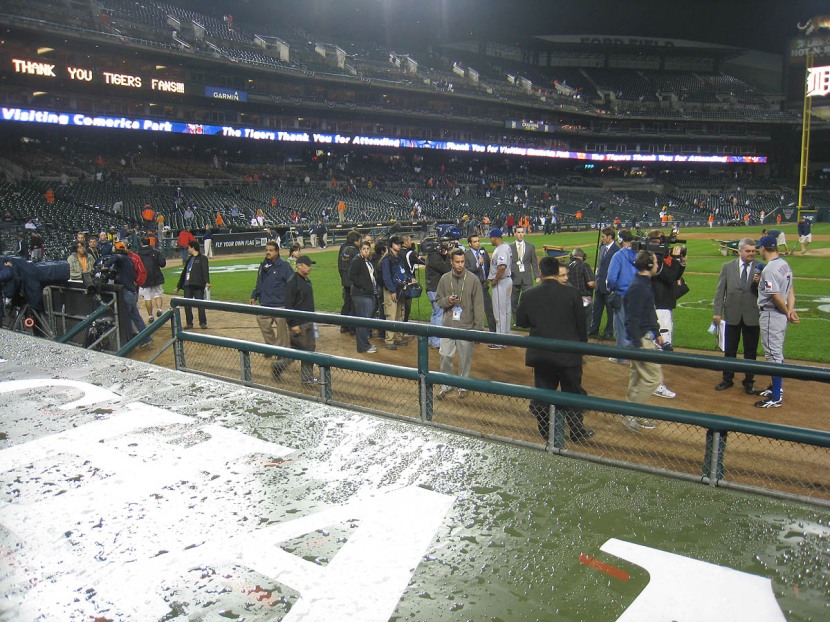 Ben and I stuck around, and five minutes later, a ballboy poked his head out of the dugout and started tossing balls into the crowd. I caught one, and Ben kinda-sorta-but-not-really got one too. The ball he got was rolling toward him at an awkward angle on the dugout roof. As he was carefully lunging for it (so as not to bump into the woman on his right), a man reached out and grabbed the ball and handed it to him. The man was holding a little boy in his arms, and they’d just gotten another ball, so he was glad to give this one to Ben. The problem was that Ben wasn’t the first fan to actually acquire possession of the ball, so even though it was intended for him, he decided not to count it in his stats. It was a brutal way for him to end the night — but it wasn’t nearly as bad as having a bedbug (at the Quality Inn in Romulus, Michigan) crawl on him at four in the morning. Is there a bedbug epidemic in Arlington, Texas? If not, I might have to start rooting for the Rangers to reach the World Series. 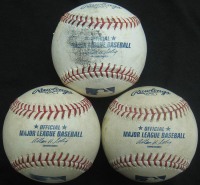 • 789 consecutive games with at least one ball

• 147 foul balls during games (including two during the post-season; the other one hit by Jorge Fabregas in the 13th inning of Game 5 of the 1999 NLCS)

• 16 consecutive postseason games with at least one ball

(I’m raising money again this season for Pitch In For Baseball, a non-profit charity that provides baseball equipment to underprivileged kids all over the world. Click here to learn more.)