Last month, Random House sent me the first pass of the manuscript. My job then was to make sure that all the artwork was properly laid out and to make my final round of tweaks. Normally, that would’ve been it for me. No more work on the book. Vacation-time at last! But this book isn’t so simple…

In the publishing world, the manuscript always goes through a second pass, but the author hardly ever sees it. That’s because it’s supposed to be perfect at that point. The layout is finalized, and so are the page numbers. Those numbers correspond to the table of contents and to the index; if a single line of text were to be added or deleted anywhere in the book, it would screw everything up. So, there’s really nothing to gain by showing the second pass to the author. At that point, the book pretty much IS what it is. Having another pair of eyes look at it would only complicate things.

Well, guess what? Random House sent me the second pass earlier this week:

Want to guess why? (Here’s a hint: look at the title of this blog entry.) That’s right, it’s up to ME to compile the index for my book. Here’s a closer look at the cover letter on top of the manuscript:

Compiling an index is an art. There are professional indexers, and they charge a lot of money. If I felt like spending that kind of money, I would’ve paid one of them to do this job. But instead, I decided to take a stab at it myself. (This way, I’ll have extra money to spend next season on baseball games.) Newsflash: Making an index is rather time-consuming. For the last three days, I’ve done nothing else with my life. I basically read the entire book VERY slowly and carefully, and I compiled a gigantic list of everything important, and of course I noted all the page numbers. Here’s what the first page of my index looked like after I made it through the first two (of 13) chapters:

It’s kind of a fun list, right? I mean, it’s not just a collection of modern-day players and teams and ballparks. We got Joe Cronin and Connie Mack Stadium. We got Florida governor Jeb Bush and fashion designer Marc Ecko. There are even categories for “death threats” and the “FBI.”

I love making lists, and in the process of making this one, I realized just how much stuff this book covers. Here’s what the first page of the index looked like after the 12th chapter: 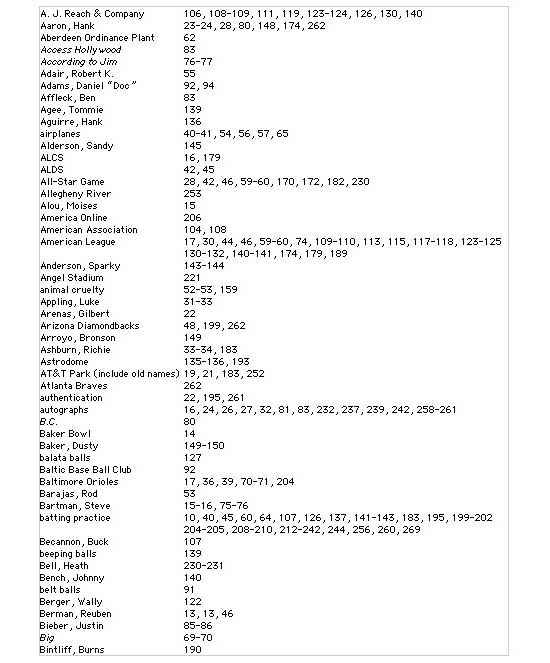 I’m not sure if the “Aberdeen Ordinance Plant” will make the final cut. It’s where a certain Hall of Famer (referenced on the back cover of the book) once caught a ball that was dropped from an airplane. But has anyone even heard of the Aberdeen Ordinance Plant? More importantly, will anyone ever want to look it up in the index? Probably not, but I’m still hoping to keep it in there. My editor will have the final say. And what about a name like Wally Berger? Is he worthy of being included in the index? You’re probably wondering, “Who the hell is Wally Berger?” so check him out on MLB.com, and look at his rookie-year stats. I’d have to say he’s worthy even though people probably won’t go looking for him. I think any major leaguer, even some scrubby guy from the 1870s, is worthy of being in the index. But what about someone like Burns Bintliff? He owned the Lena Blackburne Rubbing Mud company for a little while. These are tough decisions, and I’m just not sure what to do. I think it’ll mainly depend on how much space I’m given for the index, and it looks like that’ll be at least six pages.

Here’s what the index looked like after I finished combing through the book and played with the formatting:

You may have noticed that “ALDS” is now “American League Division Series” and that I deleted “America Online.” But now what? Should I create categories and subsections for things like “American League” and “batting practice”? Oy, I don’t know what to do, but you know what? Even if I just leave it as it is, I still think it’s a pretty damn good index.

Oh, and by the way, the “minor queries” that were flagged with those thin Post-It Notes are indeed quite minor. It’s stuff like, “Should that word be capitalized?” and “Do you want to replace this word that appears twice in back-to-back paragraphs?” And so on. Phew!