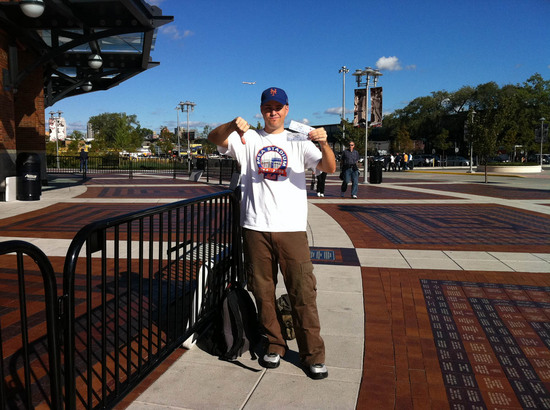 …but money was the last thing on my mind when I ran inside at 4:40pm. Here I am with left field all to myself during the first minute of batting practice:

By the way, the reason why I bought two tickets is that Jona was with me — and for the record, she took every photo in this entry with her iPhone 4. She’s very proud of her phone. She’ll be happy when she reads this entry and sees that I mentioned it. But anyway, my first ball of the day was a rather unusual snag. While standing in straight away left field, I saw a left-handed batter slice a soft line drive into the seats in foul territory. There was another fan at the back of the section where the ball landed, but he didn’t see it until a security guard waved him down toward the front. Guess what happened? He couldn’t find it, so after 10 or 20 seconds, I decided to run over there and have a look for myself. I found the ball right away, sitting in the middle of the 3rd row behind the rolled up tarp.

My second ball was thrown by a ballboy named “Jimmy” deeper down the left field foul line. Here’s a photo of the ball in mid-air sailing toward me:

All the batters in the first two groups were left-handed, so I ran over to the right field side. As soon as I got there, Mike Pelfrey tossed me a ball that fell short and bounced back onto the field. One of the Mets’ Japanese/translator-guys (who was shagging balls in the outfield) retrieved it and chucked it to me. That was my third ball of the day. Soon after, Jona made her way out to right field and took the following photo that shows me roaming through the seats above The Mo’s Zone:

As you can see, the stadium was almost completely empty, and I ended up taking full advantage.

When several righties started hitting, I ran across the Shea Bridge…

…and rushed back to the left field seats. Jona wasn’t far behind, but things tend to happen quickly, and once again, she missed out. As soon as I reached the front row, Mets rookie pitcher Dillon Gee picked up two baseballs that were sitting on the warning track. He tossed the first one to a little kid, so I shouted, “How about a ball for a big kid?” That worked. He tossed the second one to me, and then moments later, I lunged over the railing and grabbed a David Wright ground-rule double that conveniently bounced right to me.

Jesus Feliciano then threw me a ball in straight-away left field, and 30 seconds later, I raced out to the seats in left-center and got Manny Acosta to throw me another. In case you’ve lost track, I now had seven balls, and things kept going from there. David Wright launched two home runs in my direction. I grabbed the first one after it landed in the seats (here I am chasing after it)…

…and caught the second one on the fly. Then Mike Hessman blasted a home run that landed a full section to my left — landed in my glove, that is, after I ran over and caught it on the fly.

It was 5:09pm. The stadium hadn’t even been open for half an hour, and I already had double digits. Unfortunately, the Mets cleared the field soon after, so it was going to take a solid performance during the Braves’ portion of BP in order for me to break my single-game Citi Field record of 15 balls.

When the Braves started throwing, I changed into my Braves gear and moved over to the left field foul line…

…but I didn’t get anything there.

Ball No. 11 was thrown by Billy Wagner in left-center. Ball No. 12 was a home run that I caught on the fly in straight-away left. (Don’t know who hit it.) Ball No. 13 was another homer, and I ranged three full sections for it. I was in left field when the batter connected (once again, I have no idea who), and I immediately took off running to my left: 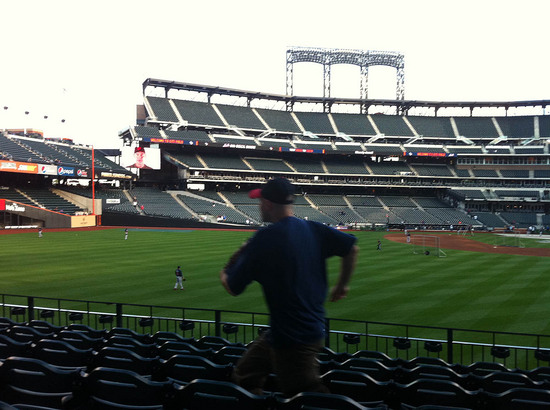 Here’s a four-part photo that shows what happened next: 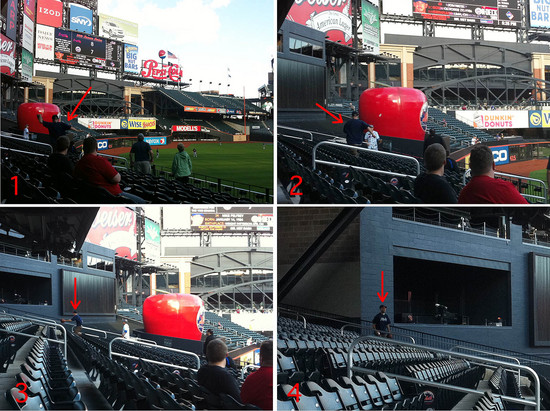 It’s pretty simple. In the first two photos above, I was running like a madman. (Note the ball in photo No. 2 streaking in front of the Home Run Apple.) In the third photo, I was racing up the steps, and in the fourth photo, you can see me holding the ball right after I snagged it.

My 14th ball was another home run. I have no idea who hit it, and I caught it on the fly.

The record-tying ball was thrown by Melky Cabrera in left-center. I was several rows back. His throw sailed a bit too high, so I jumped and made a back-handed grab. Here’s a photo of both me and the ball in mid-air: 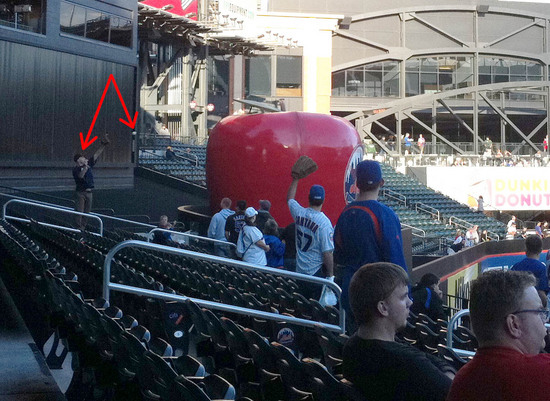 Now, it might seem like I was catching everything in sight, but that wasn’t the case. There WAS some competition, and at one point, I got flat-out robbed on a home run. Check it out:

The ball was coming right toward me. I could sense that there was another guy standing on my right, so I tried to box him out of my row. Well, unfortunately for me, he snuck past me on the steps and moved into the row directly in front of me and jumped at the last second and caught the ball right in front of my glove. What can I say? I misplayed it, and he did everything right. I should have climbed up on a seat. Then he wouldn’t have been able to reach above me. But hey, it’s hard to think/move that fast, so I can only tip my cap and admit defeat. As it turned out, the other guy reads this blog regularly and leaves comments as “li7039.” I’ve crossed paths with him a couple times in the past, and for some reason, I always forget who he is. (I just suck with faces and names sometimes. Forgive me.)

What happened next? I’ll tell you what happened next. I caught two more homers on the fly. They were both hit by righties, and I still had no idea who was batting. The first one was routine. The second one required a basket catch. The following two-part photo shows how it played out:

In the photo on the left, I was drifting through the seats while another fan down in front was moving to his right. The photo on the right shows me making the catch while the other fan was leaping and lunging for the ball.

That gave me 17 balls, and I wasn’t done. Craig Kimbrel tossed me No. 18 with a nice, easy, under-handed toss, and then I caught another home run on the fly in left-center. This homer was hit by a lefty. I think it was Rick Ankiel, but I’m not sure. It’s very rare for anyone to go oppo at Citi Field, so I consider myself lucky.

That was it for BP.

That tied my single-game record for New York City; on April 19, 2004, I somehow managed to snag 19 balls at Shea Stadium.

I decided to go for No. 20 behind the Braves’ dugout. Snagging a third-out ball seemed like the most reliable option, and I didn’t have to wait long for my chance. When Tommy Hanson struck out Carlos Beltran to end the first inning, I bolted down to the front row and got Brian McCann to toss me the ball as he jogged off the field.

It was the eighth time in my life that I’d reached the 20-ball plateau and, of course, it was the first time I’d ever done it in New York.

Let’s cut to the chase…

After the game (which the Braves won, 6-4), I got a ball from home plate umpire Bill Hohn as he walked off the field. It was my 21st and final ball of the day. Here’s a screen shot from a video that shows the ball sailing toward me…

…and because there’s been some speculation, let me just say that the ball was NOT heading toward the kid on my left. I was the one who called out to the umpire. The umpire tossed the ball directly to me. What’s the problem? See the huge security guy in the purple-ish outfit? He was watching the whole thing. If I had indeed reached out in front of the kid, do you think the guard would’ve let me get away with it? Do you think the ump or any of the other fans would’ve been okay with it? No one said a word to me because it was a clean play. But the more important fact here is that I simply don’t reach in front of kids for baseballs. I used to reach in front of people when I was a kid myself, and I regret it. Now I give baseballs to kids. I also raise money for a children’s charity by snagging baseballs. But the “media” doesn’t like to report that. Nope. The media prefers to write negative crap because it’s more entertaining. And whenever there’s negative crap written, there’s never a quote from me. Have you noticed that? I never get a chance to explain my side of the story. That’s kind of strange, don’t you think? 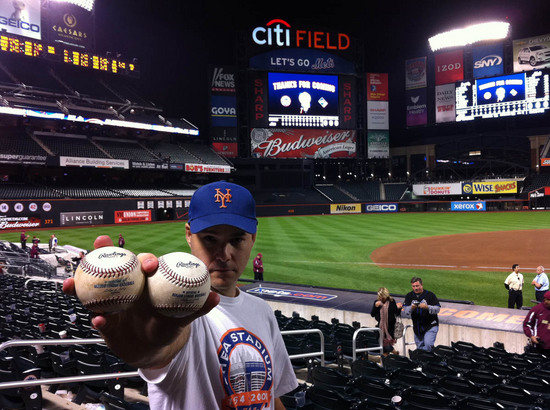 …and here I am outside the stadium with my total haul: 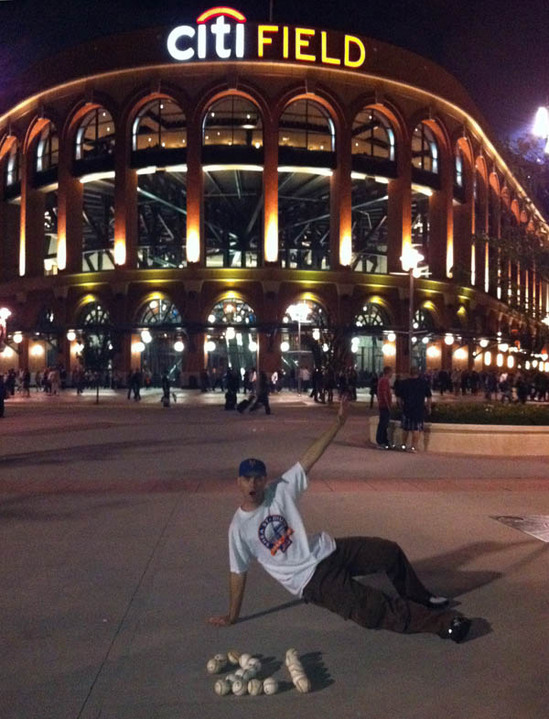 If you look closely at the photo above, you’ll notice that there are only 18 balls. That’s because I gave three of them away over the course of the night. The first one went to the nearest kid after I snagged the ball from McCann. (I kept the gamer and handed him a much cleaner practice ball instead.) After the game, I gave a ball to a kid at the dugout, and when I was walking out of the stadium, I gave away another to a boy who was so excited that his parents had to remind him to thank me. It was pretty sweet.

• 656 consecutive games with at least one ball

• 495 consecutive games in New York with at least one ball

• 356 consecutive Mets home games with at least one ball

• 18 consecutive games at Citi Field with at least two balls

• 8 lifetime games with at least 20 balls