There’s been a lot of ball(hawk)-related action in the news this past week. Just thought I’d share a list of some of the newsworthy stories as well as a few other things you might not be aware of… 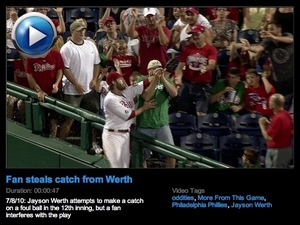 1) The Jayson Werth Incident. It happened on July 8th in Philly. Drew Stubbs hit a foul ball down the right field line. A fan in the front row caught it bare-handed. Although the fan didn’t actually reach out of the stands, Werth felt he would’ve been able to catch it and screamed at the guy. Shades of Bartman. Here’s the story on ESPN.com.
2) Mike Stanton’s well-placed homer. It happened on July 7th at Dodger Stadium. Stanton homered into the left field bullpen, and the ball landed in a catcher’s mitt that was sitting on top of an equipment bag. Here’s the story on a Yahoo Sports blog.
3) Fan’s web gem. It happened last night in Washington, D.C. The fan who caught Buster Posey’s homer was featured in the “web gems” segment on ESPN’s “Baseball Tonight.” The guy made a bare-handed catch while leaning over the railing. The umps reviewed the play for potential fan interference, but because the railing is set back from the wall, the home run stood. 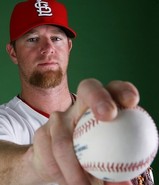 4) Ryan Franklin’s accusation. According to a friend of mine, it happened after the Rockies scored nine runs in the bottom of the 9th inning to beat the Cardinals on July 6th. Franklin claimed that the baseballs felt slick, suggesting that the Rockies were suppling him with non-humidor balls. (I’m looking for more info about this, possibly for my book, so if you can find anything about this, please leave a comment or email me.)
5) Home run ball exchanges. When Mat Latos hit his first career home run on July 8th, TV camera captured members of the Padres’ bullpen tossing four balls to the fan who caught it. Two days earlier, in an exchange that almost no one knows about, A-Rod gave a jersey to the fan who snagged/returned his 597th career homer. The ball landed in the gap behind the center field wall. A security guard retrieved it and tossed it up into the crowd. As it turned out, A-Rod wanted it for himself. And by the way, Andruw Jones hit his 400th career home run this afternoon at U.S. Cellular Field. The ball landed in the left field bullpen and was retrieved by one of his teammates.
6) The fan who fell. It happened on July 6th at Rangers Ballpark. A fan in the front row of the second deck turned around to watch a foul ball that sailed over his head. When it ricocheted back in his direction, he leaned back too far for it and plunged 30 feet over the railing. He suffered a fractured skull, but thankfully/incredibly, he seems to be okay and was just released from the hospital. Here’s the story on MLB.com. 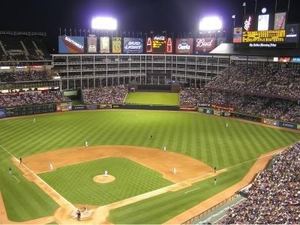 7) Speaking of Rangers Ballpark, two prominent ballhawks snagged game home runs there this week. On July 6th, Nick Yohanek (aka “The Happy Youngster“) grabbed one off the berm in center field. Three days later, Greg Barash (aka “Greg Barasch“) used his cup trick to reel one out of the gap behind the left field ball.
8) Speaking of prominent ballhawks, Shawn Bosman snagged TWO home run balls during yesterday’s game in Milwaukee. Here’s his blog entry about it. Robert Harmon (remember him from my article about Barry Bonds final home run?) also caught a home run this week — a Felipe Lopez blast on July 6th at Coors Field. (Speaking of prominent ballhawks and Bonds’ final home run, has anyone spotted Jake Frazier this week at Citi Field? Jake hardly ever leaves the Bay Area, but last night I heard that he’s in New York.)
One last thing…
Earlier this afternoon, the Mets announcers mentioned me on TV. The cameras happened to show some little kids with gloves, one of whom looked upset, so Gary Cohen said, “Never promise your son a ball unless you’re with, uhh, what’s his name? Zack. Yeah, Zack the ball catcher.” A couple minutes later, Cohen said, “By the way, it’s Zack Hample…I just Googled ‘zack foul balls’ and it came up.”