Okay, so this has nothing to do with baseball, but I need to vent. I need the world to know that Best Buy is officially the worst company I’ve ever dealt with.

It all began on April 12th — that’s 46 days ago — when my Samsung flat-screen TV died. It was actually the third time that it had died (the wireless connection was defective), so I contacted Samsung and asked/demanded that they replace it. Samsung agreed and authorized the exchange through Best Buy. That’s where I bought the original TV. 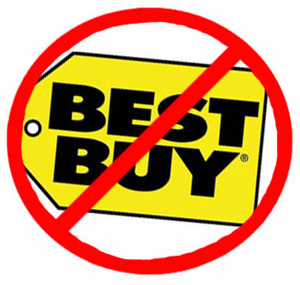 Well, guess what? Best Buy has now been on the case for more than a month, and they STILL haven’t delivered the new TV. Oh sure, they managed to send their “Geek Squad” to my apartment to take away the old one, but the new TV is nowhere to be found.
What exactly is going on?
I keep getting different answers from everybody at Best Buy — different promises about different dates when this new TV is supposedly going to arrive, and meanwhile, I’m paying Time Warner an awful lot of money for cable, which I’m obviously not able to watch. (In retrospect, I should’ve called Time Warner and had my cable suspended, but with Best Buy promising every two days to deliver the new TV, I didn’t really see the point.)
One of the most frustrating things about this whole process has simply been my inability to contact anyone at Best Buy. You see, every now and then when I call for an update, they don’t even answer the phone. Two weeks ago, it was so bad that I called Best Buy’s corporate headquarters to complain and to see if perhaps they could get through to their own store.
“I do apologize,” said the guy after putting me on hold for five minutes, “but they don’t seem to be picking up.”
REALLY?!?!?!
That’s kind of a problem, don’t you think? Can we all agree that it’s not good when a major corporation with a major store in a major city fails to answer the phone?
I had no choice but to go to the store. It took me 20 minutes to get there, and then I was forced to wait for 45 minutes for a “Sales Professional,” who had no record of my exchange. (This, by the way, took away valuable time from my work.) When I told him it was impossible to get anyone on the phone, he told me it’d be better to email him from that point on.
“I check my email every hour,” he said.
Twenty-four hours later, when he failed to answer my email, I called up and somehow got him on the phone.
“Oh yeah,” he said, “my inbox is over capacity. Sorry about that.”
This is what I’ve been dealing with.
Best Buy = Worst Buy.
It sucks on a cosmic level.
Don’t ever shop there.
(Power to the people!)