Welcome to Ebbets Field, home of the Brooklyn Dodgers from 1913 through 1957:

From the outside, it looks an awful lot like Citi Field, huh? More on that in a bit, but in the meantime, let’s head inside so I can show you what an awesome ballpark this was: 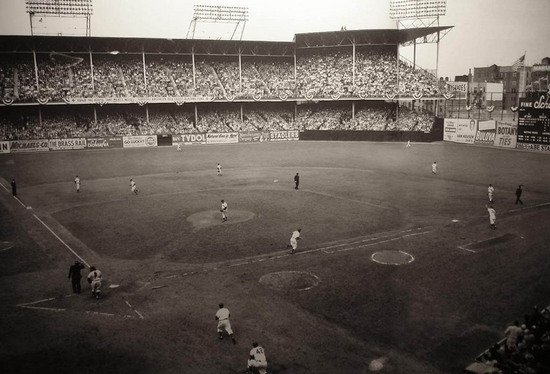 Is that glorious or what?
Here’s the view from the second deck in dead center:

(Niiiiiiiiiice.)
In the photo above, did you notice the right field wall? Here’s another look at it: 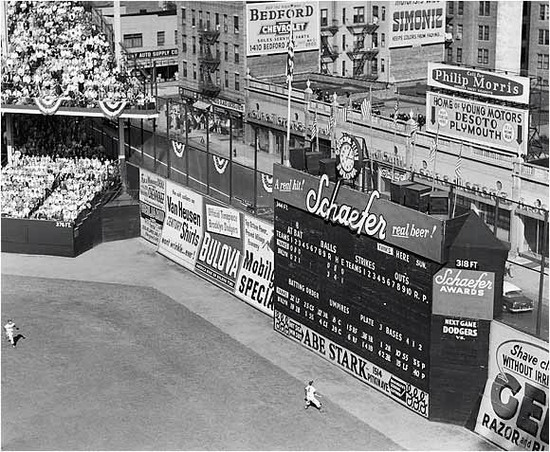 Do you know how tall it was? I’m talking about the ads combined with the screen up above. It was 38 feet, which means it stood a foot taller than the Green Monster. (By the way, whenever a batter got a hit, the “H” would light up on the “Schaefer” ad, and when a fielder made an error, the same thing would happen to the “E.”)
Do you know what was behind the right field wall? Have a look at this aerial view:

That’s right, nothing but a wide-open street — and it was only 297 feet down the right field line. You think Waveland Avenue is good for snagging home runs? Man, I can only imagine how many balls cleared the right field wall at Ebbets. Here’s what it looked like back there:

Okay, so it’s official: the park was great on the outside.
How about the inside, you ask?
Have a look at the photo below. Turns out there was a cross-aisle. Connect the two red dots I’ve drawn and you’ll see it:

Why is this a big deal? Because the ability to move laterally is key; without an aisle (or a standing-room only section), it’s impossible.
But wait, it gets better…
I managed to find an old photo of Ebbets Field that was taken during batting practice…meaning the stands weren’t crowded…meaning you can see the configuration of the seats. Check it out. There were TWO cross-aisles: 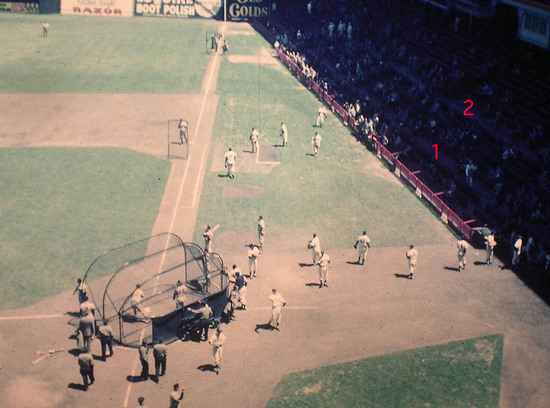 (Did you notice the puny protective screen in front of the first baseman? Also, that red railing looks nice and low — great for the fans sitting right behind it.)
The
lower deck on the 3rd base side had a double cross-aisle as well, and it doesn’t look like the ushers were quick to kick people out:

Here’s another look at the stands on the 3rd base side. You can see the inner cross-aisle, and I’ve drawn a red arrow pointing to the corner spot: 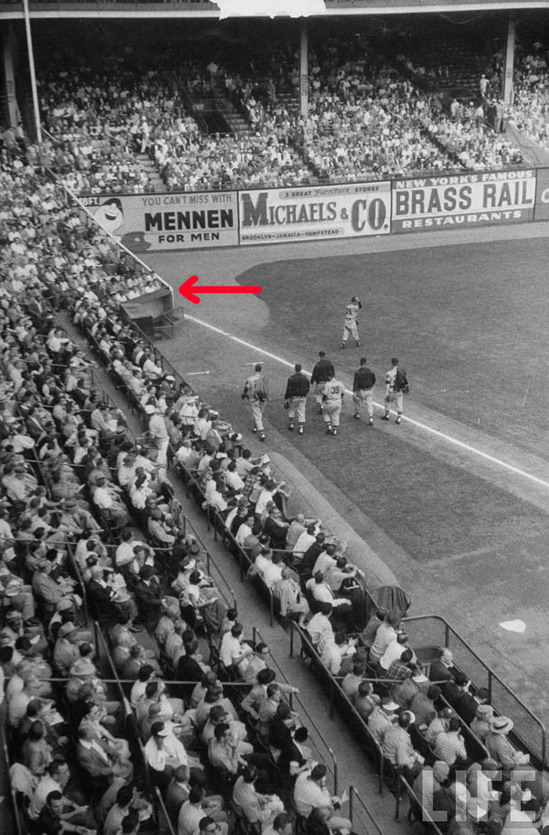 This would’ve been a good place for scooping up grounders during BP and maybe even convincing the occasional player to toss up an old ball.
Guess what? It gets even better. It was hard to tell in previous photos (when the stands were packed), but the seats in straight-away left field had a cross-aisle as well:

You can see it better in the following photo. It’s another aerial view, taken when the ballpark was empty, and I’ve drawn two more red dots to point it out: 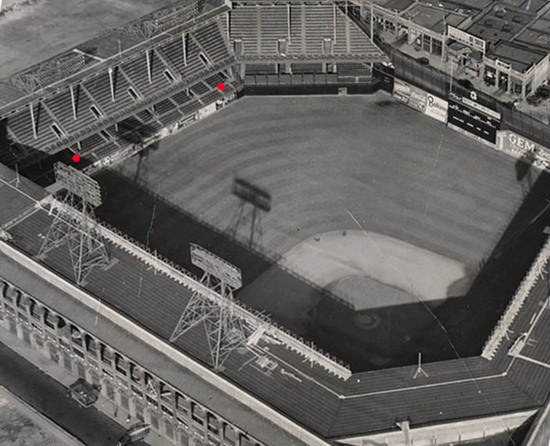 It looks like the aisles were fairly narrow — that’s just how old ballparks were designed — so it might’ve been tough to run great distances for baseballs when the place was sold out, but still, there was at least a chance to run.
The next photo is pretty random. It looks like there’s a group of kids walking toward home plate — and is that the tarp covering the field? Whatever. I’ve included this photo to give you a look at the seating situation behind the plate. There doesn’t appear to be a cross-aisle in the second deck, but at least there were tunnels, where fans probably could’ve gotten away with standing:

Even better than the chance to catch balls in the second deck was the fact that the fans were right on top of the action. That deck wasn’t too high, and it was stacked right on top of the lower deck — not set back an extra 100 feet like the upper decks in new stadiums.
One more thing: protective netting.
The picture below shows that the netting completely blocked the seats on the lower level behind the plate:

But what about the seats behind the plate in the second deck? Based on the picture above, it doesn’t look like those seats were protected, but in the photo below (which was taken from the second deck)… 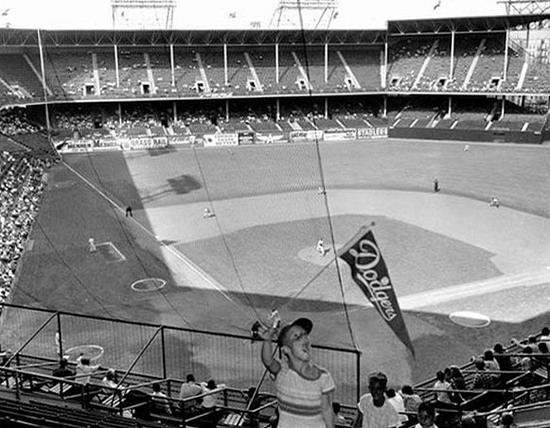 …it’s clear that there was netting. (That’s a good thing for that pennant-waving kid. Without the netting, he’d be in the perfect spot to get drilled by a foul ball from a right-handed batter. Where are his parents, anyway? DOWN IN FRONT!!! That is a boy, right? Wait a minute…) Still, there were lots of other places to snag:
1) behind the right field wall
2) cross aisles all over the place
3) low railings along the foul lines
4) tunnels to stand in
5) corner spot down the left field line
There also a good chance that foul balls flew completely out of the stadium behind first and third base.
My analysis: Ebbets Field was about as good as it gets.
And now I’ll leave you with more photos. The first is a side-by-side comparison of Citi Field and Ebbets Field. Does this make anyone (else) sick?

This next/last photo makes me wish I were born two generations earlier. It was taken in 1947. You can see Ebbets Field off in the distance behind the trolley car: 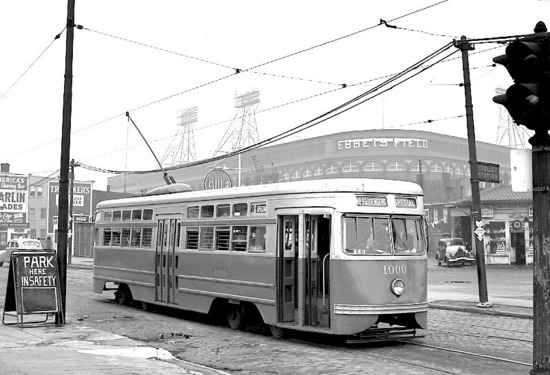 In case you want to check out more defunct ballparks, I’ve done three other entries like this on Forbes Field, The Polo Grounds, and Exhibition Stadium. I’m not sure when I’ll do another — probably within the next few weeks, and of course I’ll be blogging about other stuff in the meantime…