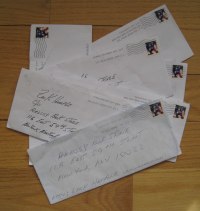 Normally, I try to keep this blog positive, but because of something rather disturbing that’s been taking place, I’m taking a break from my normal routine to address it publicly. More specifically, I’ve received a series of threatening letters dating back to July 11, 2009. The letters started being sent (to my family’s book store) because I had a VERY ugly altercation with several Yankee fans at a game on May 21, 2009. Although I haven’t been asked to do so, I’ve removed the photographs of these people that I originally posted on my blog. I just felt it was the right thing to do, and that it would help everyone involved move on.

These letters, as you’ll see below, contain “adult” language, so here’s my official disclaimer: Read this entry at your own risk. The people who wrote the letters asked me repeatedly to respond here on the blog, so I finally decided to scan the letters and share them so that I can answer them one by one.
Here’s the 1st letter: 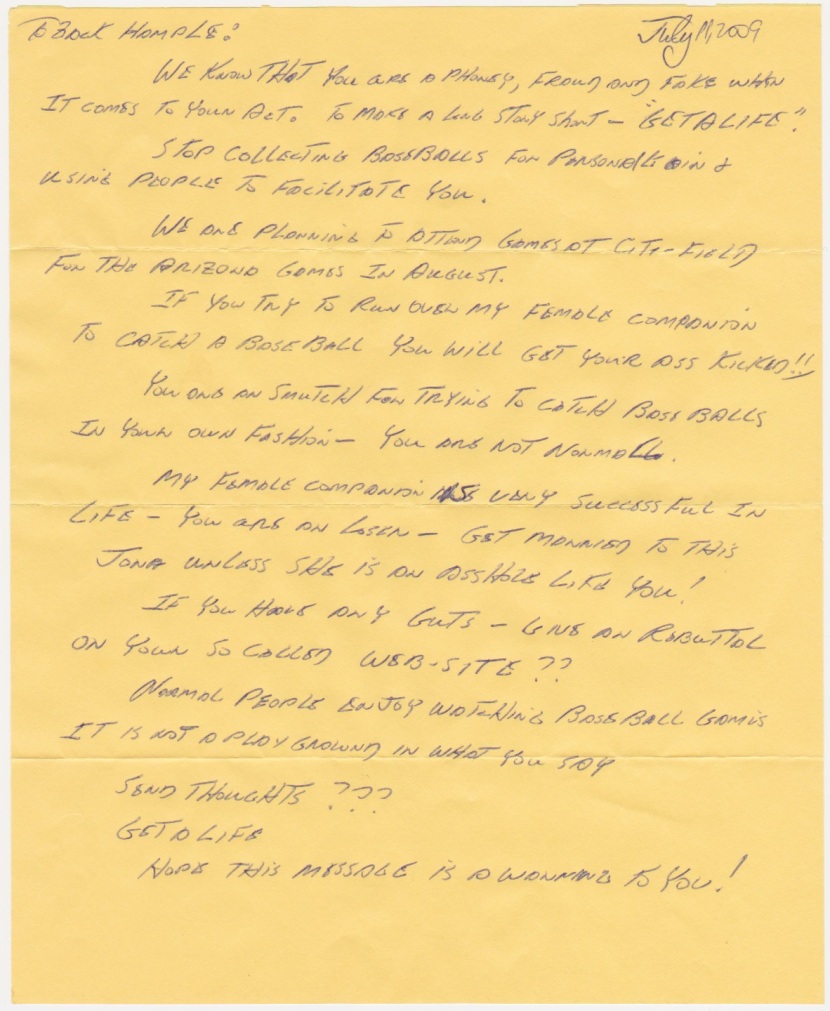 Here’s my response:
I remember why you guys first got so mad at me. It’s because I changed into an Orioles shirt during batting practice in order to get the Orioles players to toss baseballs to me. So you’re right, what I do IS an “act.” I’m not really an Orioles fan, and I hope it’s okay for me to say this, but I’m not a Yankee fan either. It might sound strange, but I don’t have a favorite team. I only root for individual players, and for the record, I happen to love Derek Jeter and Mariano Rivera (and I really miss Bernie Williams). I will never root against those guys, and I was glad for both of them when the Yankees won the World Series last year. In this letter, you’ve accused me several times of not being “normal.” I realize I’m not normal. Lots of people have said this over the years. But the way I see it, it’s not such a bad thing. I just have my own way of doing things — working, being in relationships, watching baseball games, you name it. I never intended to bother you (or anyone) by being the way I am. Finally, yes, I do run around a lot at baseball games, but I’ve never knocked anyone over — not once in more than 800 games. Again, I’m sorry you’re bothered by this, but I want to assure you that I’m always very careful.
Here’s the 2nd letter: 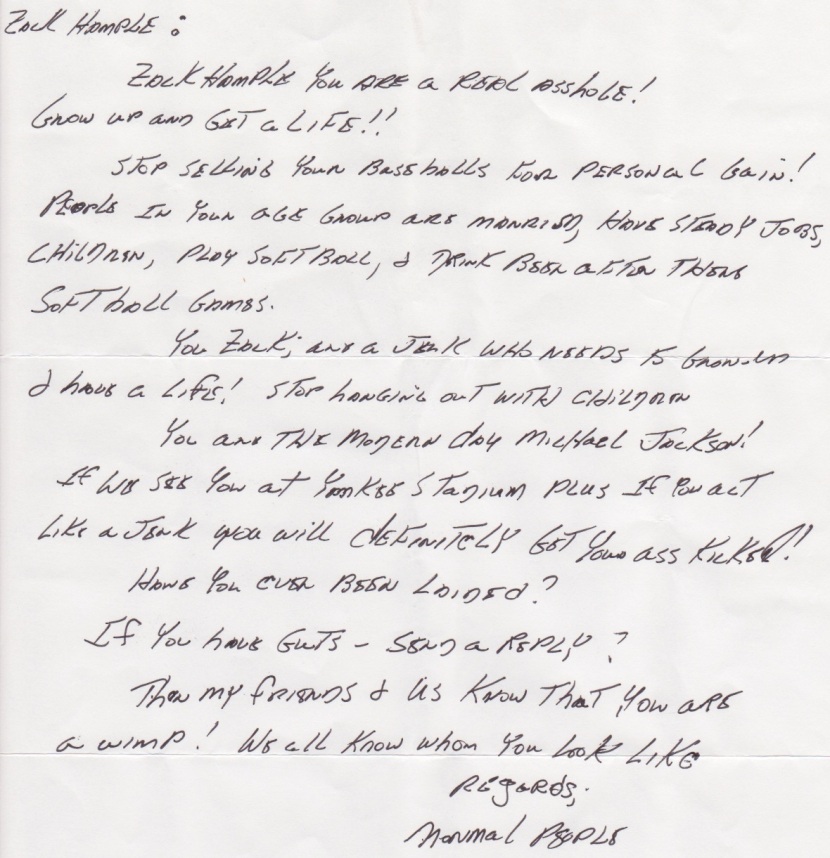 Here’s my response:
I know I need to grow up. I’ve always been somewhat immature for my age, and I’m working on it. But at the same time, I really feel like I have my life together in many ways, so c’mon, give me some credit. You said that I should stop selling my baseballs. What’s up with that? First of all, if I wanted to sell balls, I don’t see why that would be a problem, and secondly, I’ve never sold one anyway. Not one ball. Ever. I’ve given away lots of balls to kids (perhaps not as many as some people would like), and I’ll continue to give away many more. You said that most people my age “are married, have steady jobs, children, play softball, & drink beer.” That’s true. But why do I have to be like everyone else? I’m 32 years old. My dad married my mom when he was 48, and he was 51 when I was born. Now he’s 84 and still going strong. He’s a hero to me. I love him and admire him and take after him in many ways. The fact that he was older than most fathers when I was born didn’t seem to affect him or me in any negative way, so what’s the big deal if I wait a few more years to get married or have kids? Like I said, I know I have some growing up and maturing to do. That’s why I don’t want to rush into starting a family. There’s still a lot I need to learn. As for softball, I love playing it. Unfortunately, I don’t have enough free time to play (because I’m so busy working), but I’m hoping to get back into it someday and maybe join a league. And as for beer, what can I say? I’ve tried it, but I just don’t like it. Alcohol is really dangerous for me anyway because I’m severely hypoglycemic; I have a serious blood sugar imbalance, and I’ve heard that alcohol turns into sugar after people drink it. I was once told by a nutritionist that I could become diabetic if I’m not careful, so I try to stay away from sweets. I know that alcohol is an acquired taste, but quite frankly, I don’t see the point of drinking something repeatedly in order to make myself like it when it happens to be extremely unhealthy for me in the first place. I once got high, so it’s not like I’m terrified of adult substances. It was an interesting experience, and I’m glad I did it, but it’s just not something that I felt the need to do again. No judgments against people who drink and smoke and take drugs. All I can say is that it’s not for me. Finally, you asked if I’ve ever gotten laid. I was a late bloomer. It didn’t happen for me until I was 20. But yes, to answer your question, I’ve done pretty well with the ladies ever since. I’m not even sure how. I think I’ve gotten luckier in that sense than I have with all the baseball stuff.
Here’s the 3rd letter: 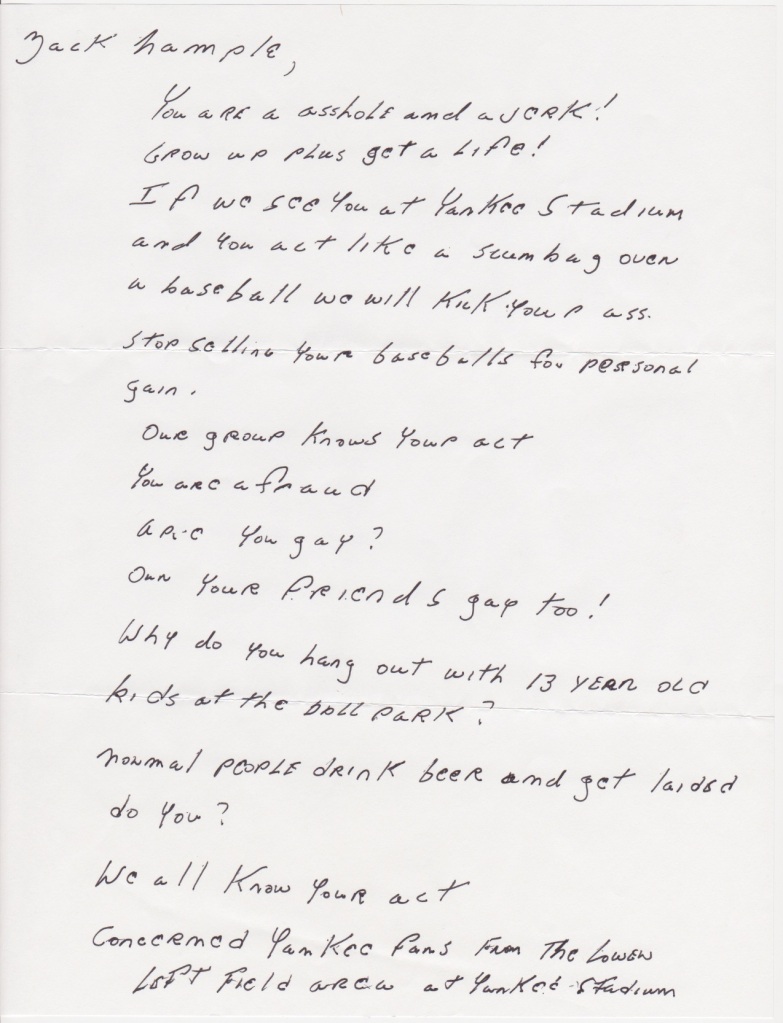 Here’s my response:
I’m not gay (ask Jona and all my ex-girlfriends if you don’t believe me), but yes, I’m friends with people who are. I don’t think that should be a problem. I’m also friends with tall people, short people, white people, black people, rich people, poor people, Mets fans, Yankee fans, old people, and young people. The way I see it, if someone’s cool, they’re cool. That’s enough for me. As for hanging out with 13-year-olds at the ballpark, there are kids everywhere. I think kids are fun. Lots of the people who read this blog are kids, and they happen to be really cool people. Am I supposed to avoid them? As I said in my response to your 2nd letter, I give away lots of baseballs to kids. Last year, I helped raise more than $10,000 for a children’s charity, and I’m planning to organize another fundraiser this season. Here’s the press release about my charity work. I take this very seriously. I don’t have any evil intentions, if that’s what you’re asking or suggesting.
Here’s the 4th letter: 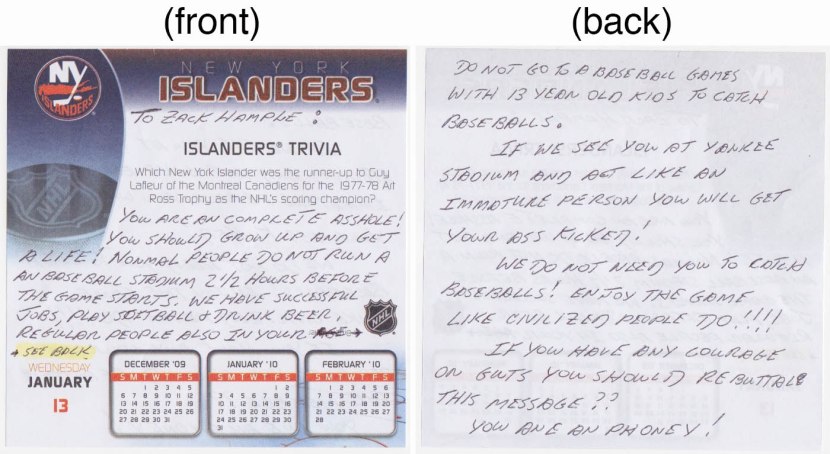 Here’s my response:
What’s with all the talk about beer? Seriously, I just don’t get it, but I’ll tell you what: next time I see you guys, if you want, I’ll buy you each a beer. How’s that? I can’t promise I’ll drink one too, but the first round is on me. Let’s just talk face to face and shake hands. I think this whole thing was just a bad misunderstanding that got blown out of proportion. Also, I want you to know that I *do* enjoy the game of baseball very much. It’s not just the balls that I’m after. I watch games on TV all the time, and I read every boxscore every day. I don’t even play fantasy baseball. I just keep up with the stats and standings because I love the sport and I want to know how all the players and teams are doing.
Here’s the 5th letter:

Here’s my response:
Many people have told me to “get a life.” I used to hear that all the time when I was in school. I don’t know what it is about my life that everyone seems to think is so screwed up, but anyway, like I said, I’m working on a lot of things, so hopefully that will make a difference in the long run. I know I’m not perfect. Not even close.
Here’s the 6th letter: 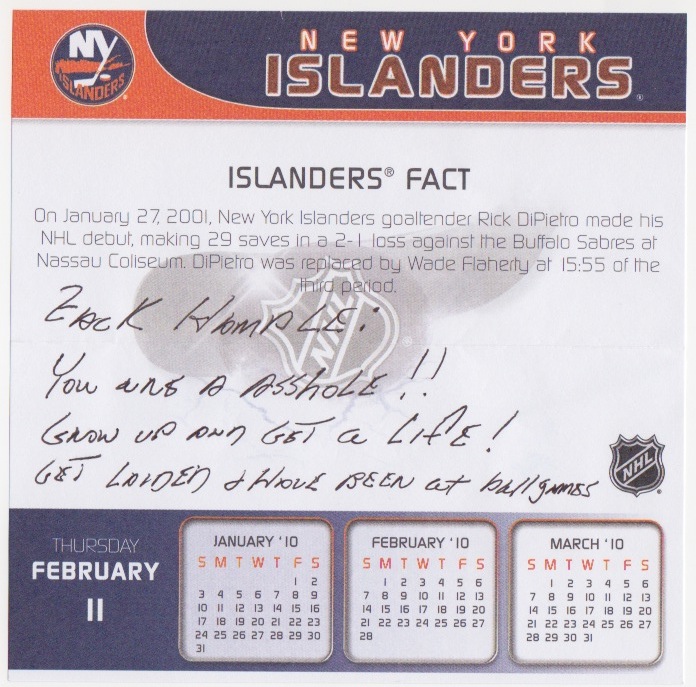 Here’s my response:
I mean this is all seriousness: it seems like it would be a lot cheaper to drink before or after the games. What are the Steinbrenners charging for beers these days? It’s like $10 for one of those plastic bottles, right? Even if I wanted to drink at games, I don’t know if I could afford it. I’m a writer, after all, so I don’t make that much money.
Here’s the 7th letter: 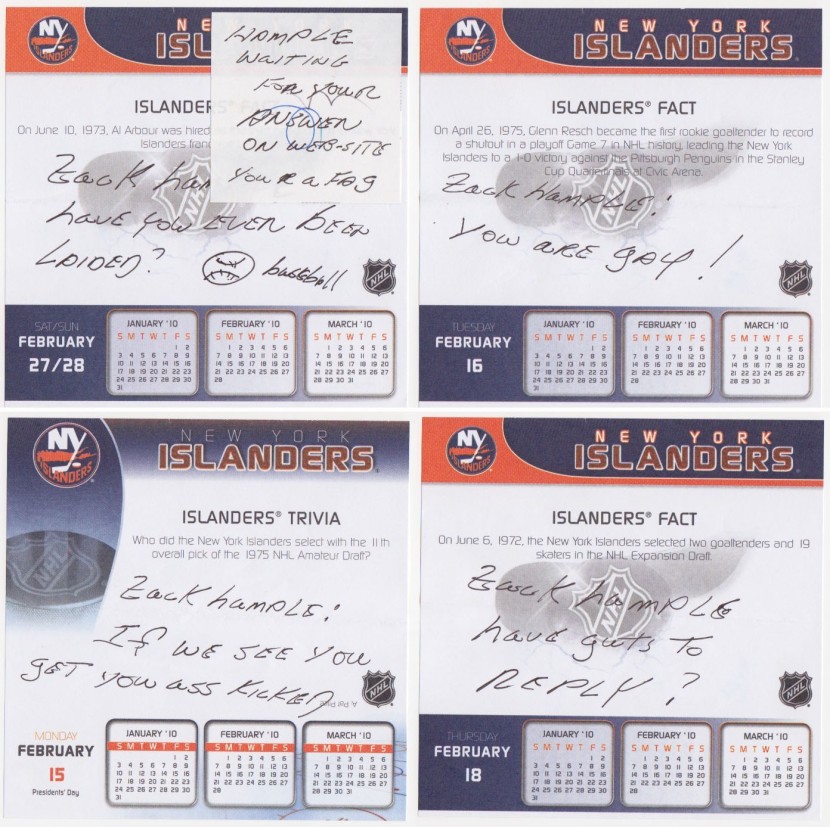 Here’s my response:
I’m not gay. I’ve gotten laid. I don’t want to fight with you. And yes, here I am, replying to your letters.
Here’s the 8th envelope (which I just opened today): 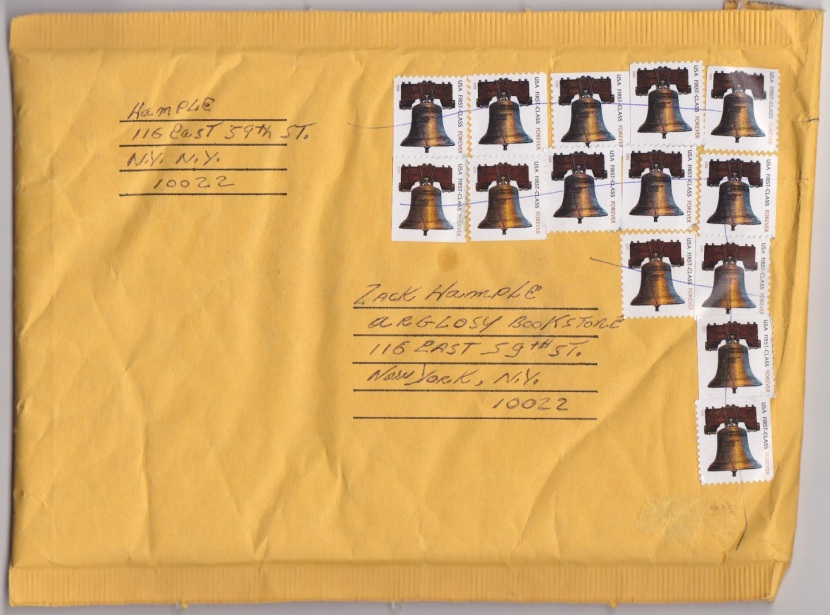 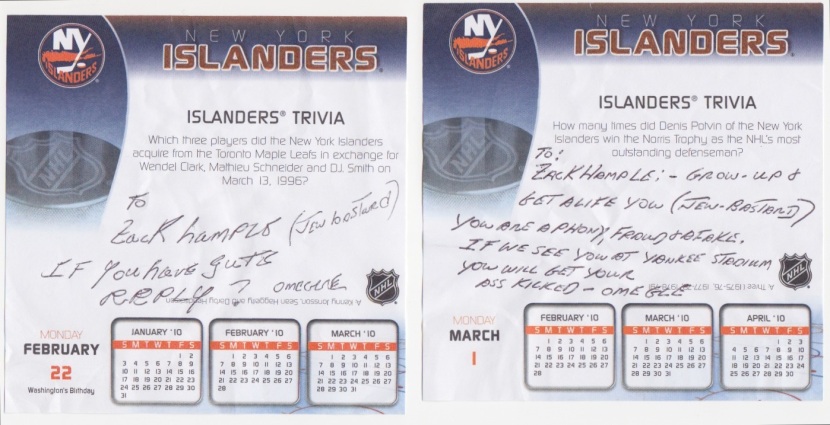 And here’s the hockey puck that was inside the envelope: 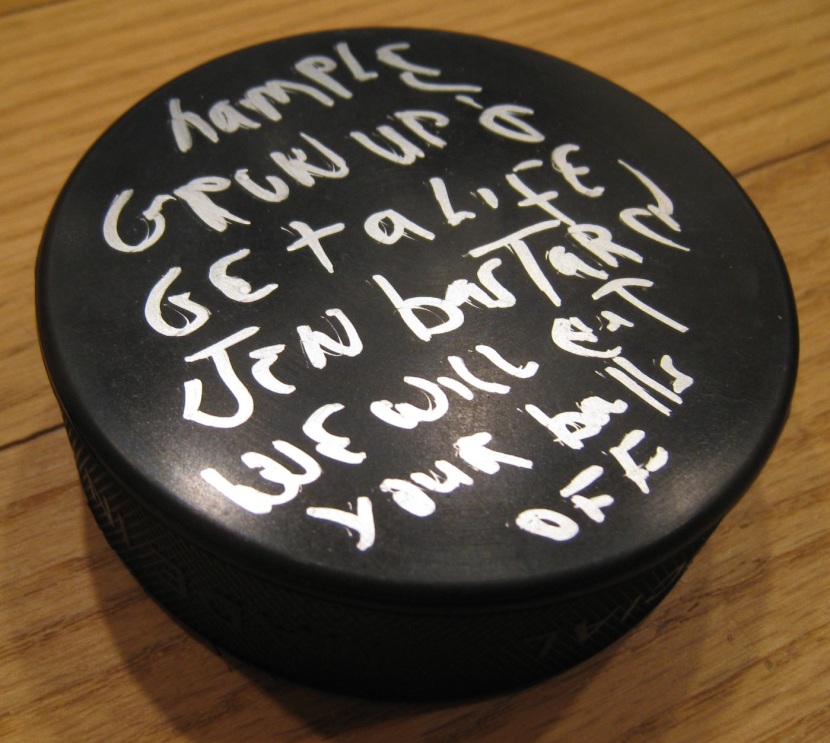 Here’s my response:
Come on, this is just uncalled for. There’s no need to bring religion into it or to make these kinds of threats. Jews are really sensitive to this kind of stuff. My parents were so freaked out about this that they called the police and filed a report. I actually had a detective from the 18th precinct contact me this evening. He asked me if I knew who was sending the letters and if I wanted to press charges for aggravated assault. I told him I didn’t want to press charges. I said I just wanted to deal with these people directly, man to man, and hopefully settle this like civilized people. So what do you guys think? Can we do that? I regret arguing with you at the game last season, and for pulling out my camera and turning this into a bigger deal than it ever should have been. That was a real mistake on my part, and I’m sorry. I remember that one of you guys asked me for a baseball for your grandson. At the time, I was so angry that I never would have considered it, but now, if you’ll give me a chance, I’d like to try to catch one for him. Let me know what you think.
Sincerely,
Zack Hample