An unexpected gift was recently sent to me by way of my family’s book store here in New York City. This is what it looked like in the packaging…

…and this is what I saw when I unwrapped it: 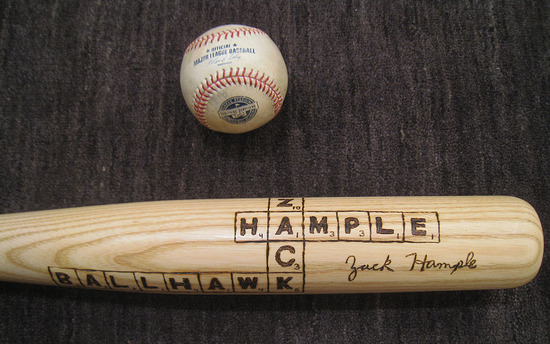 (That ball, by the way, which I placed in the photo in order to give you a size perspective, is Robinson Cano’s grand slam from 9/28/09 at Yankee Stadium.)

Here’s an even closer look: 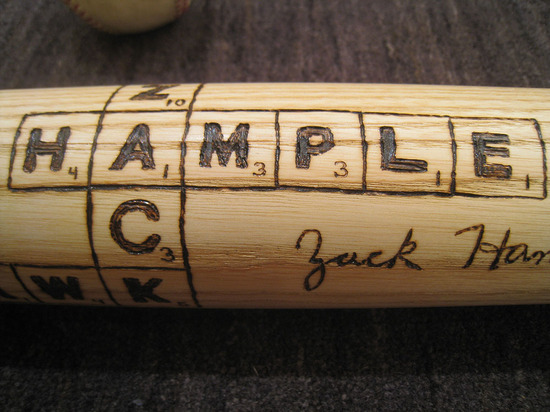 As you can see, the bat was “branded” with my name — along with the word “ballhawk” — in Scrabble tiles. For those who don’t know, I used to play competitive Scrabble (check out my old tournament results) and still visit the NYC Scrabble club on occasion. So yeah…very cool.

Here’s a photo of the bat’s trademark… 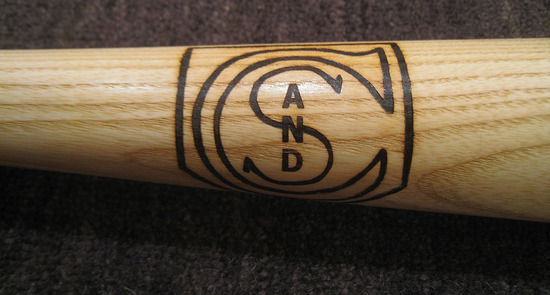 …and here’s one more shot that I took of the bat in its entirety: 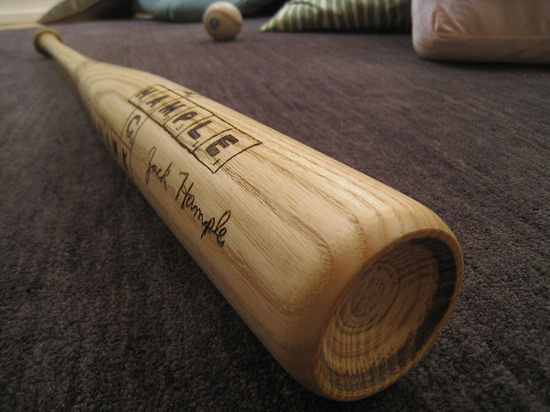 You know who made this bat?

(I ran into Todd and his son Tim several times this past season. You can find a photo of us in this entry from the day that Randy Johnson SHOULD HAVE won his 300th game in Washington, D.C.)

Todd sent me some photos of the bat being made.

Here’s the wood…held in place on the machine…in its original cylindrical form: 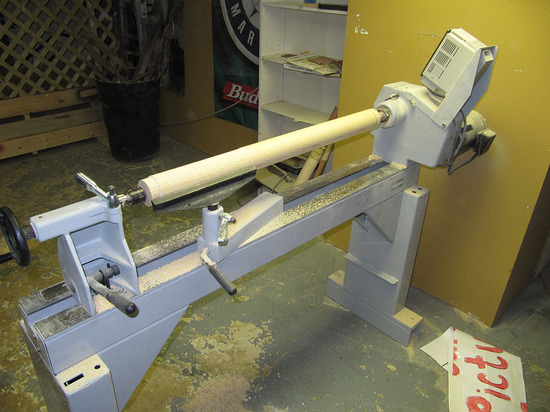 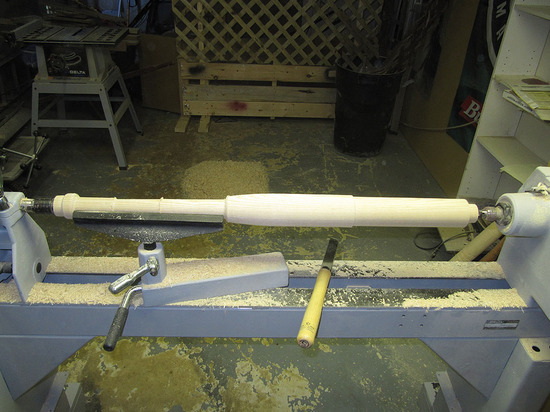 Here’s Todd working on it: 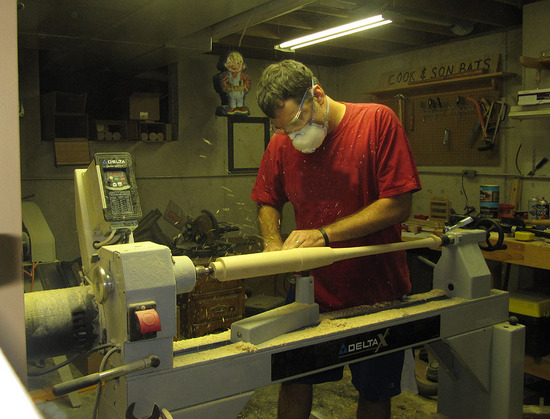 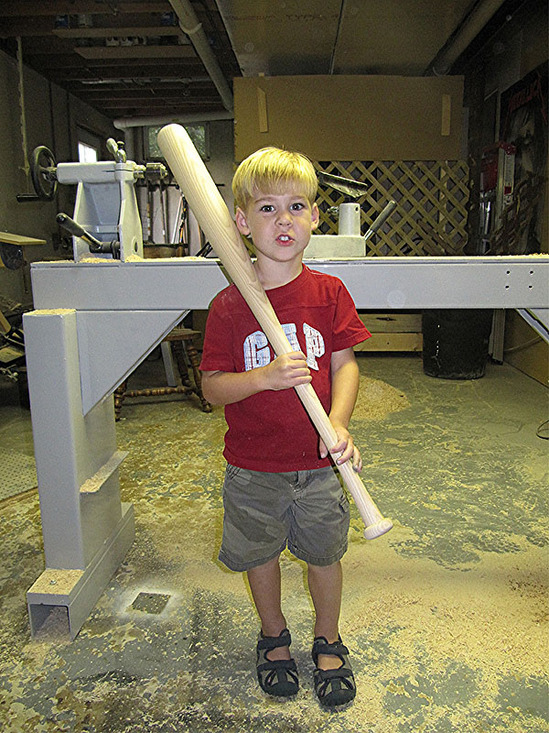 Here’s how Todd initially thought of arranging the lettering: 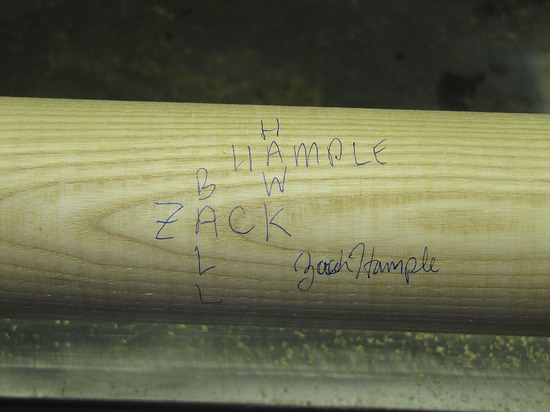 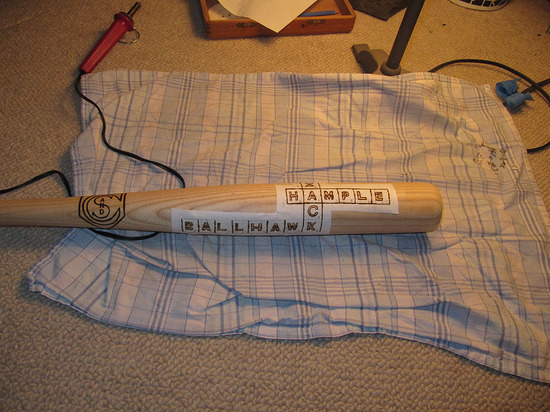 As for my signature, Todd grabbed it from a photo of a ball that I’d signed for my Watch With Zack clients on 7/26/09 at Yankee Stadium. Check it out: 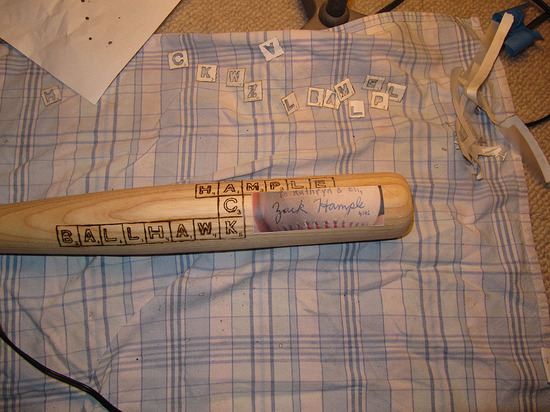 My handwriting is much neater on paper. You should see how nicely I write “Zachary B. Hample” when I sign my checks. Baseballs, however, are another story. I think I’ve mentioned it a few times in the past here on the blog: if you’ve never tried to write anything on a ball, you’d be amazed at how tough it is. Not only is it round, but there’s nothing to lean on. But I digress. The fact is, the bat looks in-CRED-ible. Here’s a little of what Todd later said about it in an email:

Let me give you a little background. As you might notice, I make wood baseball bats. I’m also sort of an “idea” guy. I get an idea and I dwell on it until I make it happen. When I noticed all of your Scrabble comments/occurrences on your blog, I just got this vision of a Scrabble-themed bat. I kept thinking about it for a month or two. I had no clue if you’d want such a bat or think it was just weird, or what. But I decided I had to make it just to see how it would turn out. Once I made it, I liked it. Still, I felt a little strange sending it up your way because I didn’t know what you would think about it...I’m glad I got the [Scrabble tile] values right. Truthfully, I don’t know if I’ve ever played Scrabble. I went online and downloaded pictures of Scrabble tiles. Then I realized there were different values for different languages. But I felt pretty sure that I had the right values.

And that’s pretty much it — the story of one of the coolest gifts I’ve ever received. Again, here’s the link to Todd’s blog. (He recently posted some entries about older games.) If you have a few minutes, check it out…and if you’re lucky, you might run into him and his son at a game next season.