This wasn’t just another game. Not only was it the National League Division Series — Cardinals vs. Dodgers — but there was something extra special about it for me: it was the day before my appearance on “The Tonight Show With Conan O’Brien” and I was going to be filmed by a roving camera crew.

Half an hour before the gates opened, I headed to the Top Deck and picked up my media credential:

I headed down to the left field pavilion and met up with the crew along the way. Here I am explaining my various T-shirts to the camera:

Once inside the stadium, my job was simple: snag as many balls as possible so that there’d be some exciting footage for the show.

In the photo below (taken by my girlfriend Jona), I’m the guy wearing the “RAMIREZ 99” shirt:

There wasn’t much action early on — I had a couple close calls — so I spent most of my time explaining things to the camera.

Finally, after 15 minutes of nothingness, Manny Ramirez launched a home run over my head and I raced up the steps:

There was an all-out scramble for the ball as it rattled around underneath the benches, and I managed to come up with it. Huge relief. Up until that point, I felt like I was personally letting down Conan — like I was a ballhawk fraud who’d made preposterous claims and then failed to back them up.

Several minutes later, I caught a ground-rule double behind the left field wall…and that was it for the Dodgers’ portion of BP. Not good. I’d been hoping to pad my numbers early on before it got crowded, but at least both of the balls had a Dodgertown stamp on the sweet spot. (If you want to see my complete collection of stamped/marked balls, click here.)

Because of my media credential, I was able to exit the pavilion and re-enter the main part of the stadium. My plan? To get some balls from the Cardinals on the right field side. First, of course, I changed into my bright red Cardinals gear, and even though my Dodgers shirt was poking out underneath, I was able to convince Ryan Franklin to toss me a ball. If you look closely at the photo below, you can barely see the edge of the ball as it disappeared into the pocket of my glove: 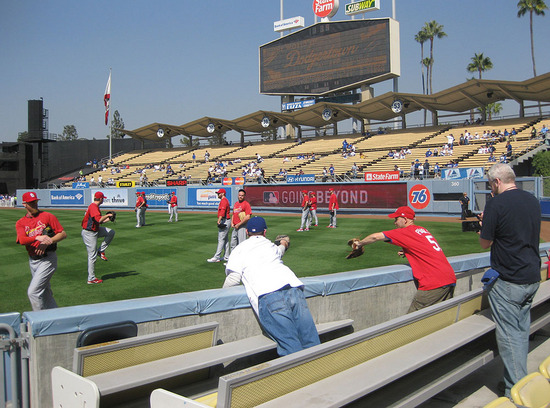 Soon after, Matt Pagnozzi threw me my fourth ball of the day. Here I am preparing for the easy two-handed catch:

I headed to the right field pavilion after that and snagged a home run that ricocheted down into the gap behind the wall. (I’m not sure who hit it.) Then, when Albert Pujols and Matt Holliday started taking their cuts, I raced back around to the left field side and positioned myself deep in the cross-aisle, more than 400 feet from home plate. Holiday hit two consecutive bombs that reached the aisle. I bolted to my right for the first one, but it sailed over my head and was promptly snatched by another fan. The second homer came closer to me, and I was able to climb over a few benches and reach out over the bullpen for a back-handed catch. The whole section booed me because of my clothing, so I lifted up my Cardinals shirt and revealed my Dodger Blue underneath. Some people laughed, some people cheered, some people continued booing, and some people were like, “Huh?” It was pretty funny.

I played the staircases for the rest of BP…

…but nothing else came my way.

Right before the game started, I headed back into the main part of the stadium and got Mark DeRosa to toss me his warm-up ball behind the 1st base dugout.

Then Slash performed the national anthem… 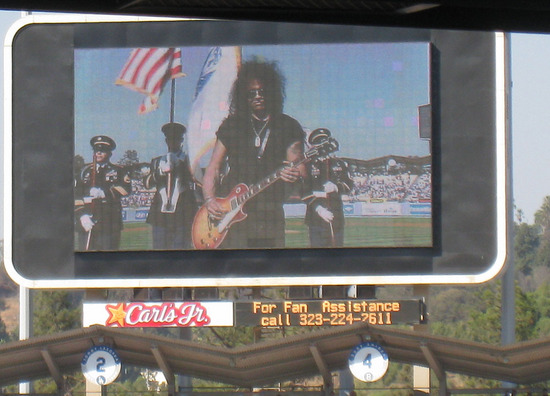 …and I headed back outside the stadium once again. It was time to change into my Waldo shirt:

In my previous entry I mentioned I was going to wear it, not because it’s sexy but because I knew it’d be easier for people to spot me in the crowd. The only problem was…I was never IN the crowd. I spent the first few innings halfway down a staircase behind the left field wall, and then when security told me I couldn’t stand there, I moved to the very bottom. That really sucked because it meant I couldn’t even see the game. All I could do was look up at the sky and hope that I’d be able to see the baseballs coming toward me. In the bottom of the 4th, I came *really* close to snagging Andre Ethier’s home run, but it took a bad bounce after it cleared the wall and ricocheted right to the ONE other guy who’d raced down a different staircase. That also really sucked, but at least I got to hang out with Manny:

The guy in the photo above is named Jose (aka “Mannywood” and “Jose Being Manny” and he told me that he sometimes refers to himself as “The Mexican Zack Hample”). You can see more photos of him on MySpace and MyGameBalls.com. He’s a super-cool guy, and he always hangs out in the left field pavilion.

The game itself was DAMN exciting, but it didn’t end the way I wanted. With two outs in the bottom of the 9th and the Dodgers trailing, 2-1, James Loney hit a line drive right at Holliday in left field. All Holliday had to do was catch it, and the game would’ve been over. The Cardinals would’ve evened up the series at one game apiece. But Holliday failed to make the catch. He said later that he never even saw the ball, and I believe him. As he charged in toward it, it nailed him in the stomach. Casey Blake then drew a nine-pitch walk and Ronnie Belliard followed by ripping the first pitch he saw into center field for a game-tying single. Everyone in the stadium was going nuts, but for different reasons; the other 51,818 fans were simply cheering on their beloved Dodgers. I, however, was ecstatic because it meant the game might go into extra innings, which meant I might get another chance to catch a home run. Russell Martin walked to load the bases, and then Mark Loretta ruined everything with a game-winning single.

After the game, the camera crew got a final shot of me holding up all seven of my baseballs. Once they took off, I gave away two of the balls to kids and then got a friend to take my picture with Jona: 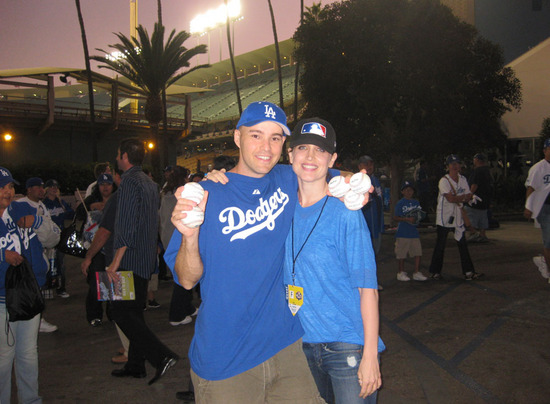 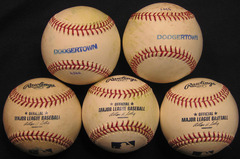 • 3 ticket stubs collected at this game (pictured below the balls)

• 628 consecutive games with at least one ball

• 11 consecutive post-season games with at least one ball

The best article EVER written about me was published yesterday on ESPN.com. Here’s the graphic that was originally up on the site…

…and here’s the article itself.

Next game for me?
Who knows…