For months and months, I’ve been hearing that the seats from the old Yankee Stadium were going to be on sale for nearly $2,000 a pair, and I couldn’t believe it–not just from a financial standpoint, but because I couldn’t wrap my brain around the fact that THE stadium was really going to be demolished. Well, yesterday, as my No. 4 train approached 161st Street, I got a glimpse inside and saw that the seats are indeed being pulled out: 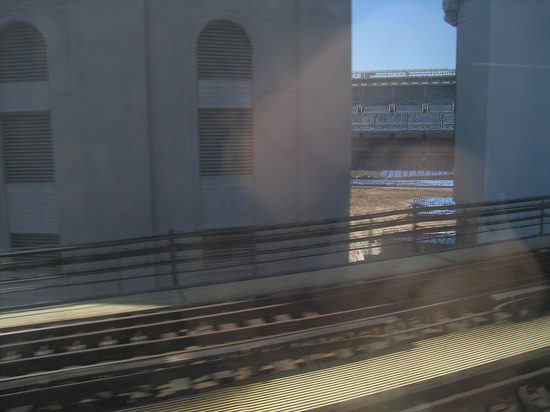 It was strange and sad to see the field devoid of grass, and of course to see the seats stacked up on the field itself.

I headed over to Gate 6 and saw a couple familiar faces. In the photo below, I’m with Brian (aka “puck collector” in the comments section) on the left and Eric (the ultimate bobblehead/autograph collector) on the right: 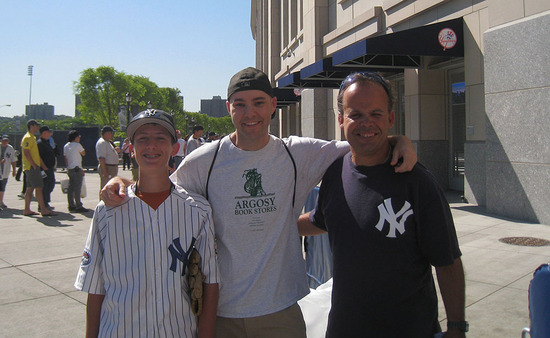 The stadium opened at 4pm (wow!) and to my delight, a few Yankees were already on the field, taking an early round of batting practice. I headed down to the right field seats… 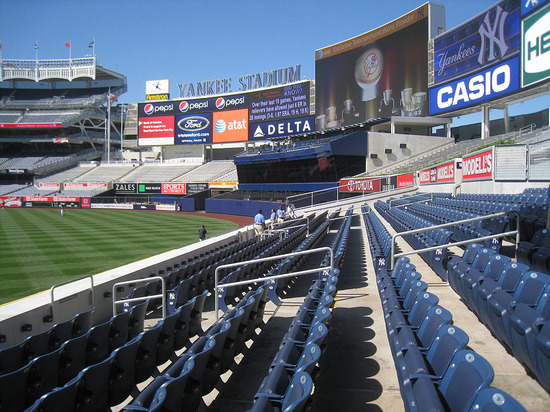 …and noticed that there were more righties than lefties taking turns in the cage, so I ran around to the left field side. (I love being able to run behind the batter’s eye. It only takes a minute. At the old stadium, if you wanted to move from right field to left, you had to run all the way around home plate and then head back out along the foul line. It took such a long time that it usually wasn’t even worth it.) The seats were pretty much empty. I had two sections to myself out in left-center. I was all set for a monster day when a security guard came over (oh no…) and gave me advice on how to get a ball.

“Sometimes,” he said, “when they hit one to the wall and the player comes over to get it, you can get him to give it to you.”

Moments later, one of the righties connected on a deep fly ball that was heading to my left. I started running through the third row, then judged that the ball was going to fall a bit short, so while it was still in mid-air, I climbed down over a row of seats and lunged at the last second over another row for the thigh-high catch. (I have no idea who hit it.) I opened up my glove to take a look at the ball, hoping that it would be commemorative, but the sweet spot was facing up, so I grabbed the ball, not expecting much, and turned it over, and Oh My God:

It was a BRAND new commemorative ball. I mean, it was newer than new. Right-out-of-the-box new. One pitch, home run, into my glove, yay. That pretty much made my entire day right there. I figured I was going to end up snagging a bunch of these balls before the season was through, but I hadn’t gotten one yet and I was officially antsy.

I caught another homer on the fly in left field. So easy. All I had to do was move five feet to my right and reach up over a gloveless fan who was ducking.

Let me quickly say two things now so I won’t have to keep repeating myself:

1) Every ball I snagged yesterday except for that first one was standard.
2) I have no idea who hit any of the balls I got, so don’t ask.

The Yankees finished their early round of BP, and then the whole team came out to stretch and run along the right field foul line. I had a little time to kill, so I slowly made my way around the field level and stopped to take the following photo. It shows the gigantic/awful partition as well as the netting that protects the fancy seats:

FYI, the netting doesn’t stay up during the game–not that it matters because neither you nor I will ever get to sit there.

I met up with Brian along the right field foul line. He’d already snagged four balls, including one with the commemorative logo, but within the next 10 minutes, I tied his total for the day by snagging two more of my own. The Yankees had begun playing catch, and when they were wrapping up, I got one thrown (over the netting and partition) by Jose Veras and then got Nick Swisher to toss me another.

When this stadium opened last month, fans were not allowed into the field level seats without field level tickets, even during BP. Now that the Yankees have eased up on that moronic policy, anyone is allowed to get down close to the field (as it should be), at least until 5:40pm, and as a result, the seats were packed while the Yankees were hitting:

The sun was brutal in right field, so if you’re planning to spend any time out there during BP, you better wear a cap and/or sunglasses. I managed to catch another home run out there–my fifth ball of the day–when everyone around me got blinded and ducked out of the way at the last second. (I’m sure my own retinas suffered some damage, but whatever, it was worth it.) The ball was hit by a righty (mighta been Jeter). I was in the third or fourth row, and it was falling short and tailing to my left, so I scooted down the steps, hopped over a knee-high metal bar, stepped into a little open area (which is probably meant to be a camera well), and made the catch. I was proud of myself for that one because it actually required some skill.

At 5:40pm, security kicked everyone out of the seats who didn’t belong there. I changed into my bright orange “RIPKEN 8” shirt and found my way into the left field seats. Amazingly, I didn’t get a single ball thrown to me by the Orioles, but I did catch another homer. Nothing fancy about it. I had to move about 20 feet through an empty row, and after I made the catch, a security guard (there were about two dozen guards out there) complimented me for having gotten a great jump on the ball, and he asked me if I ever played. I told him I played some college ball and that I could probably play left field better than Johnny Damon. He laughed, but I was serious.

Then something really bad happened…

I had a half-empty water bottle in my bag that had somehow leaked. Everything in my bag was soaked. (This is the Yankees’ fault, by the way. They don’t allow backpacks into the stadium, so I had to cram all my stuff into a little drawstring bag, and it all got jumbled together and messed up.) My commemorative ball? Soaked and waterlogged. Wallet? Soaked. Cell phone? Soaked and totally dead. (I still need to call T-Mobile.) Pens? Markers? Baseball cap? All soaked. My camera?! Soaked, but at least it was in a case that protected it, for the most part, so somehow it still works.

I was so upset about this that I considered leaving the stadium and just going home. I actually had to leave the seats for 10 minutes DURING BATTING PRACTICE to deal with it. I had to wrap up my cell phone in some plastic bags from a souvenir stand because it was overheating, and I went to the bathroom and got some paper towels to put around the commemorative ball. It was a true disaster.

The rest of the night? Whatever. I stayed for the game, but I was too bothered by everything that had happened to enjoy it. 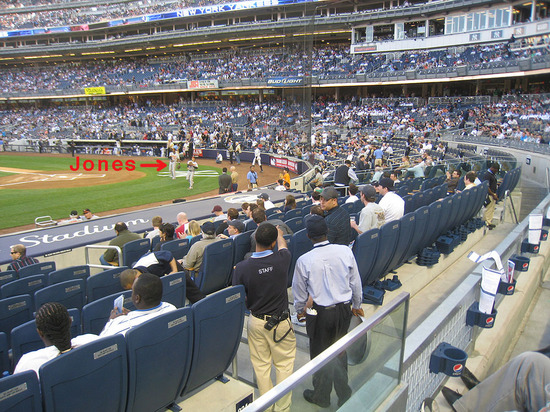 …and I managed to get him to toss me the ball on his way in. (He’s now the eighth “Jones” to have thrown me a ball, joining Andruw, Bobby J., Bobby M., Brandon, Chipper, Chris, and Todd. This is important stuff. Only the Johnsons have more entries on my master list.)

Another thing the Yankees messed up was the info on the jumbotron. Brian Roberts is NOT 25: 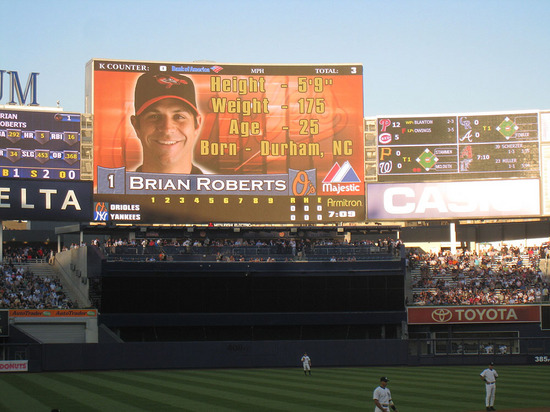 I sat behind the dugout during the game and proudly wore my orange Ripken shirt:

I was hoping for a third-out ball, but the players kept tossing them to a specific little girl in the front row. She ended up getting SIX balls. It was so ridiculous the way she kept getting them that all the fans around her kept throwing their arms up in disgust every time she got another. Who ARE these kids, and how the hell do they get to sit down there? Whatever. I shouldn’t be complaining. I did fine for myself, and as Mariano Rivera put the finishing touches on the Yankees’ ninth straight win, I handed a brand new ball to a little boy who’d been wearing a glove and sitting near me all night. The way his face lit up…let’s just say it brought some nice closure to an otherwise unsettling day.

• 4 gorgeous, gold-stamped ticket stubs collected at this game, pictured on the right. (These are for the seats right next to the 3rd base dugout.)

• 593 consecutive games with at least one ball

• 474 consecutive games in New York with at least one ball

• 131 consecutive Yankee games with at least one ball

One final thing…and normally I wouldn’t do this…but it’s for a friend who did an incredible set of favors for me, and by extension those favors helped me snag more balls for the charity, so I owe her. Remember Kelly from Chicago? She’s the Cubs fan who let me crash at her place last month. She gave me her season tickets (for free!) to Wrigley Field on April 21st and 23rd and drove me back to Chicago after that game in Milwaukee. Yes? Remember now? Anyway, she asked me to help spread the word about a contest that she’s in. If she wins, she’ll get to throw out a ceremonial first pitch at Wrigley (something she’s always dreamed of) and she needs everyone’s help. All she has to do is get the most people to sign up for a Cubs-related newsletter, and she’s currently in the lead. There’s a new restaurant inside Wrigley called the Captain Morgan Club. Kelly says:

“Please go HERE and sign up for the Captain Morgan newsletter (you can easily unsubscribe later). Put kelly_mcmahon@yahoo.com in the “Who Referred You” field. Ideally, you can just use an old email address to sign up, but make sure it’s still active because you have to click a link in a confirmation email for your entry to count. This email will most likely go into your junk folder, but it will come from Harry Caray’s Restaurant Group, so you can easily find it. Don’t forget to go in there and click the activation link, or your entry won’t count!!”