Screwed by the weather!

Miserable day all around.

Don’t go to Chicago in April.

This is what I saw when I ran into the stadium: 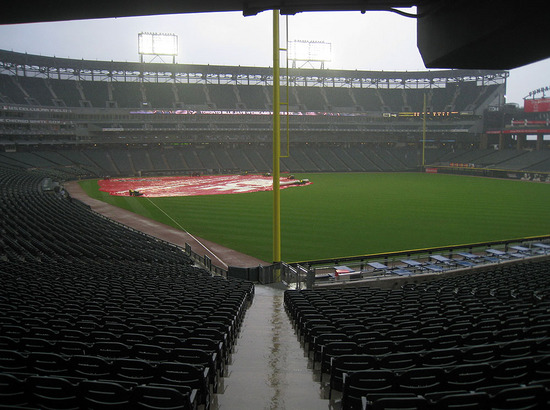 Thankfully (and for some strange reason) there was a ball waiting for me in the right field bullpen: 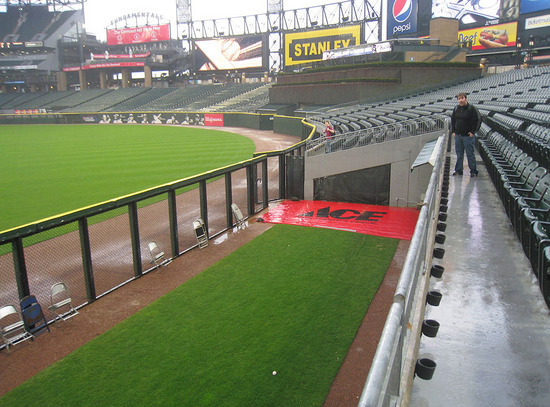 I might not have noticed this ball if not for my new friend Scott and his friend Chad. (In the photo above, Scott is the guy wearing jeans and a black jacket, and Chad is in a maroon shirt just beyond/above the red tarp.) I was staying back under the overhang of the second deck because it was pouring. These two gentlemen, however, were down in the seats and looking for easter eggs when they discovered the ball in the bullpen. Scott doesn’t have a ball-retrieving device and Chad had left his at home, so they waved me down and let me go for it.

In the following photo (which was taken by Scott), you can see me trying to knock the ball closer: 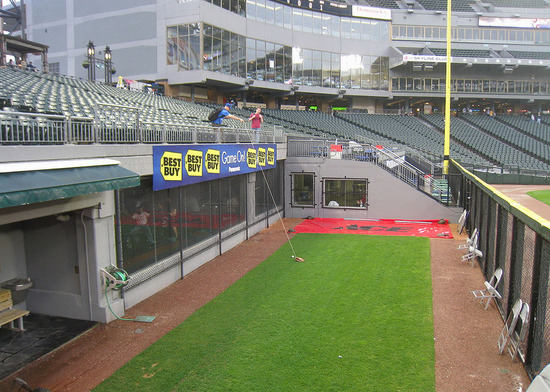 The bad news is that my string got horribly tangled (I blame the wetness) and I failed to reel in the ball. The good news is that a couple of groundskeepers eventually walked into the bullpen and one of them tossed it to me. Although there’s no official “assist” category for ballhawks, Scott and Chad definitely deserve one. Not only had they pointed out the ball, but they didn’t even ask for it when the groundskeepers made an appearance. So…BIG thanks to them.

The ball was soaked, and it weighed about half a pound. My glove was also soaked. My string was soaked. My backpack was soaked. My feet were clammy. The ink on my rosters had bled all over the place. My whole body was freezing. It was just a day of suck. And to make matters worse, when it stopped raining, the Blue Jays never came out. Normally, when there’s no BP, the teams will still take the field and play catch. But no. Not this time. There was nothing happening on the field. There was no way to snag baseballs…so I wandered and took photos, starting with the open-air concourse in center field: 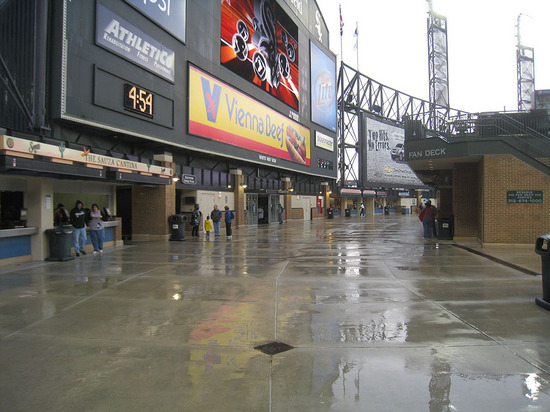 I headed to the left field corner of the upper deck… 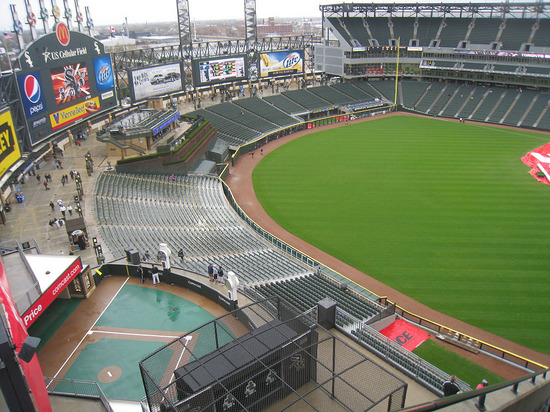 …and then made my way toward home plate: 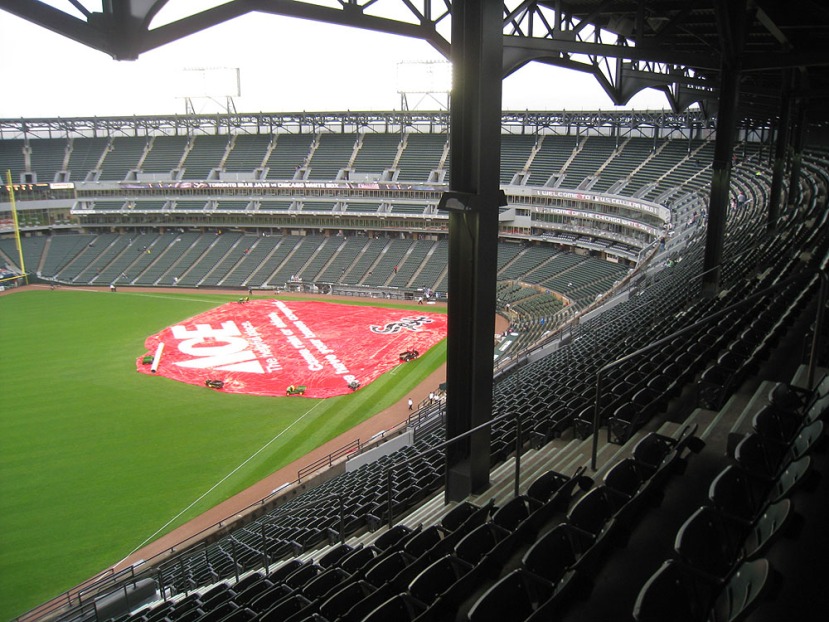 I’m not sure what to make of the support beams. Are they really necessary? I mean, are the really
holding up the top edge of the upper deck? Or are they just there to make The Cell look charming and old? I’m pretty sure–and correct me if I’m wrong–that when construction began on this stadium in 1989, technology had advanced to the point where view-blocking beams would’ve been unnecessary. This upper deck is rather high and far and steep; if I were trapped in the last few rows and THEN had to sit behind one of those beams, I wouldn’t be happy. But then again, security is so laid-back at this stadium that unless it’s sold out, there’s no reason why anyone would ever have to sit there.

Here’s my panorama attempt from behind the plate:

This is what the upper deck concourse looks like. Pretty nice, pretty standard: 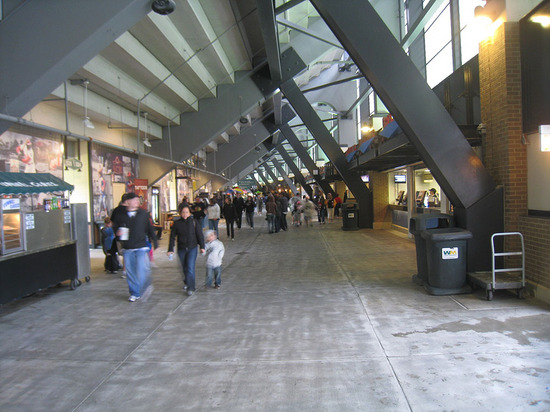 I noticed some lousy stadium design as I cut through the seats toward the right field side. In the following photo, look how far the steps extend toward the front of the upper deck: 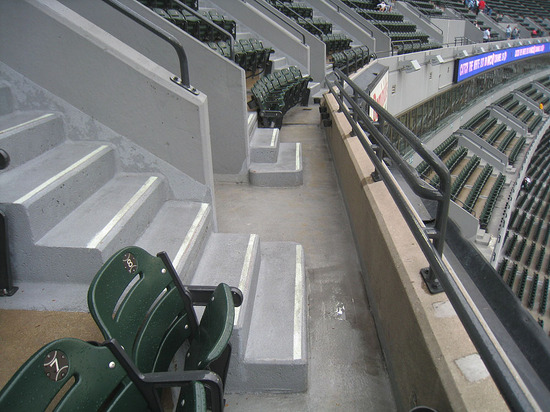 Let’s say you’re sitting in the front row and you want to get to the concourse. When you reach the steps, you’d either have to climb over them or scoot carefully between the bottom step and the railing. It took somewhat of an effort for ME to reach the tunnel in an empty stadium, so I can only imagine how tough it would be for old/fat people when it’s packed.

Here’s another oddity. Not a mess-up. Just something cute and quirky. Look at the little segment of railing attached to the side of the beam: 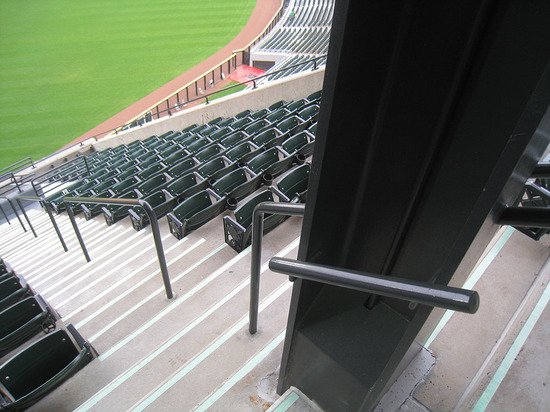 I wasn’t kidding when I said security is laid-back. I *did* have to pay $34 for a field level ticket in order to get into the field level seats, but once I was in, I was free to go everywhere, including here: 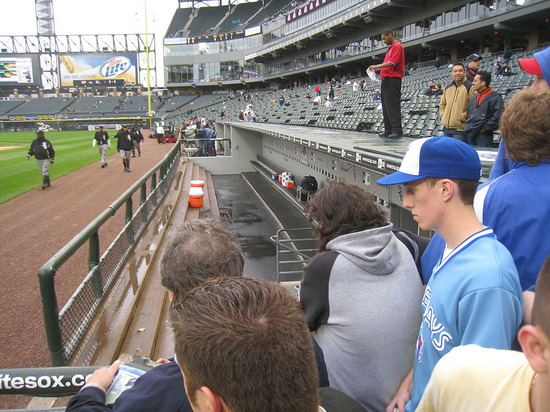 Can someone please tell me why it’s okay for autograph collectors to cluster at the dugout at U.S. Cellular Field, but not at Wrigley Field? Or Citi Field? Or the new Yankee Stadium? I hate that certain teams (read: owners) have the right to enforce all kinds of strict rules. There should be a league-wide policy that gives every fan permission to get as close to the field as they want, in any section, at any time of the day until the game begins. Then, if certain anti-fun owners feel the need to instruct their security guards to check tickets, so be it. I wish I were the commissioner of Major League Baseball and/or an owner. (Evidently you can be both at once.) I’m telling you, the world would be a better place.

Here’s another look from the front row next to the dugout: 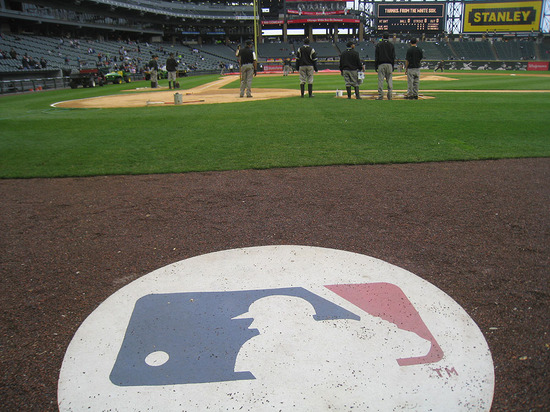 Half an hour before game time, two White Sox players started throwing in shallow left field. I figured there’d be a mob of fans trying to get the ball (at least there would’ve been in New York) but the only mob was passing by on the warning track: 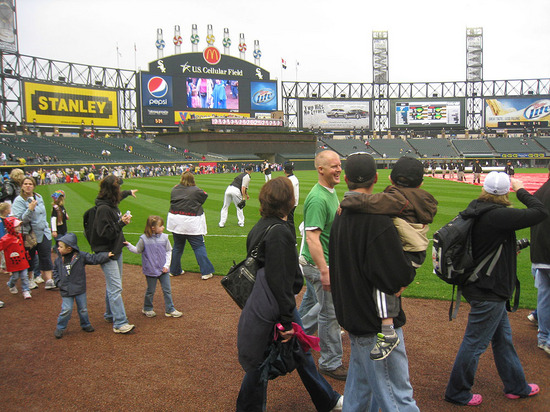 The White Sox had invited 2,200 Girl Scouts (and their parents/siblings/etc.) to take a lap around the field. I was concerned that one of the kids might get hit by an errant throw, but the two players–John Danks and Gavin Floyd–were very careful. (One little girl walked right up to Danks with a ball and pen in her hand and was quickly stopped by security.) Meanwhile, I was the only fan in the seats who had a glove, and when the guys finished throwing, Danks had no choice but to toss me the ball.

The game was delayed 14 minutes at the start, and it rained on and off throughout the night. (I’m surprised it was rain and not snow.)

I decided to stay behind home plate and go for foul balls. This was my view late in the game: 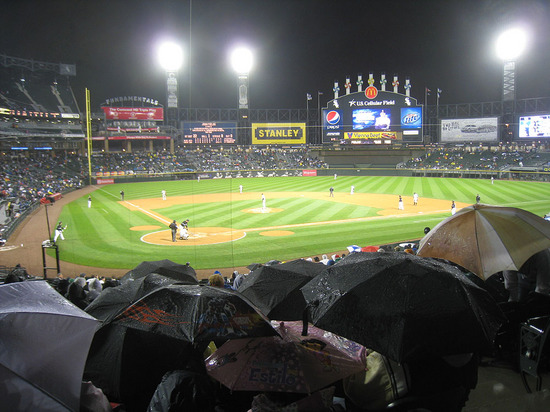 Why was I there and not in the outfield? Because Jim “Future Hall of Famer” Thome and A.J. “99 Career Homers” Pierzynski weren’t playing. It was so miserable and cold that I decided I deserved the pleasure of sitting close to the action.

Scott and Chad had the same idea. They were sitting one section to my right. There were a few foul balls that came close enough for us to get up and run, but we didn’t snag any of them. I got a third-out ball from Jose Bautista after the second inning, and Chad kept his mini-streak alive by getting a ball from the ump after the game, but that was it. Hardly any action. Super-lame. The White Sox won, 10-2, and then there were fireworks. Whoop-Dee-Doo! 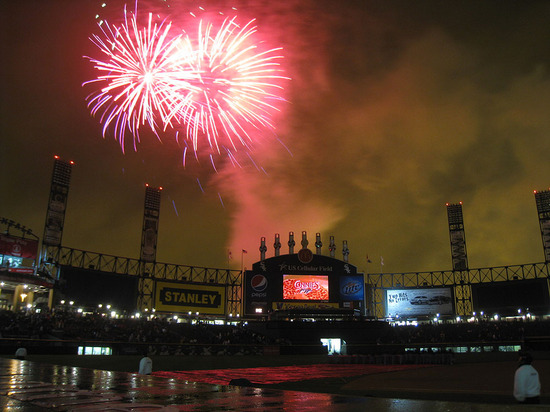 At some point during the game–I think it was the top of the 5th inning–I felt my phone vibrate in the upper right pocket of my cargo pants.

“Who the HELL is texting me?” I thought as I reached for it. (I don’t text. I have T-Mobile. I didn’t sign up for texting, but I still get charged 20 cents every time I send or receive a text. It’s complete B.S., and as a result, whenever I give my cell phone number to someone, I have to insist that they never text me. But they still do. And my phone bill get inflated several dollars every month. The cheapest texting plan from T-Mobile is $5 per month, so I’m still saving money, but it’s still a ripoff, and I can’t wait to dump them and get an iPhone. Anyway, there IS a point to this story…)

I pulled out the phone and flipped it open, and this is what it said: 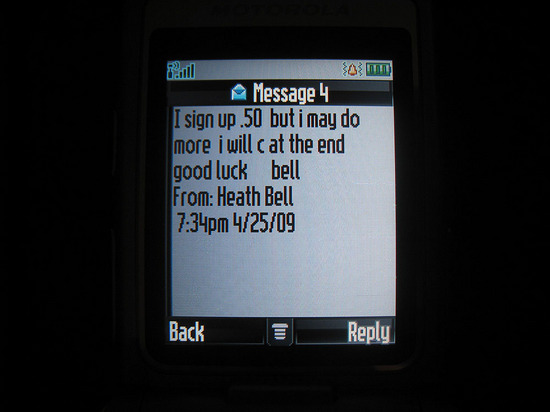 Yes, that would be THE Heath Bell who pitches for the San Diego Padres–he’s the only one who has permission to text me–and he was talking about my charity. I had told him about it when I saw him on 4/15/09 at Citi Field, and he told me to email him the link. (Very quickly, for those who don’t know, I’m getting people to pledge money for every ball I snag during the 2009 season. That money will go to a charity called Pitch In For Baseball, which provides baseball equipment to needy kids all over the world. The largest pledge so far is one dollar per ball. The smallest pledge is a penny, and it’s all adding up in a big way. If you want to see the complete list of donors and learn more about it, click here.) I was surprised that Heath signed up so quickly. Ten days? I would’ve been glad to have him sign up after ten weeks, for even a nickel per ball, but he came through. He is truly The Man. I can’t say it enough.

• 3 soggy balls at this game

• 581 consecutive games with at least one ball