I started the day by bowing down to a legend.

Moe Mullins, perhaps the most successful ballhawk of all time, made his way out to Sheffield Avenue nearly two hours before the stadium was going to open. The man has snagged 238 game home runs from major league games, including five grand slams. His lifetime ball total, including everything he’s caught at batting practice and Spring Training, is 5,274. Truly incredible.

Two other very successful ballhawks made their way out to Sheffield as well. There was Ken Vangeloff (first time I’d met him) and Dave Davison (a friend for the last decade). I truly felt like I was in the presence of greatness.

…and I got the attention of one of the players…and got him to toss a ball over the bleachers and onto the street…but he airmailed me…and since there was a car speeding past at that exact moment, I wasn’t able to cut across and race after it.

“Chicago ballhawks don’t beg,” said Dave. (It’s true that he and Moe and the other guys rarely ask the players for balls.)

“I’m a roving ambassador,” I replied, “so doesn’t that give me permission?”

Dave said he was just messing with me, then added, “We’re in mid-season form. It’s either rip or BE ripped.”

Remember when I mentioned last month that I’m working on a new book? One thing I’m in the process of doing for the book is interviewing the all-time greatest ballhawks. Moe is obviously one of them, and he told me he doesn’t really like talking on the phone, so I put away my glove and pulled out my digital voice recorder (yes, I came prepared) and interviewed him, right there on the street, for an hour and two minutes. During that time, three more balls got tossed out onto Sheffield, and I’m pretty sure I would’ve snagged at least one or two of them had I been trying. It was pretty frustrating (and I felt guilty about the charity) but I simply HAD to talk to Moe. That’s actually one of the main reasons I made this trip: doing research for the book.

Because the wind was blowing in from left field, the ballhawks didn’t bother running over to Waveland Avenue (which runs behind the left field edge of the ballpark) when righties were at bat. They just stayed on Sheffield, and Moe didn’t even bother wearing his glove:

Pretty soon it was time for me to go inside so I said goodbye to the ballhawks and headed to the VIP entrance near the right field foul pole. I’d splurged and bought a “bleacher box” ticket for sixty-two dollars. Ouch! (Research for the book. Yes, that’s my excuse.) At Wrigley, you can’t get into the bleachers with a regular ticket, and if you’re in the bleachers, you can’t get into the main part of the stadium. BUT…if you have a bleacher box ticket, you can go everywhere. I figured it was worth doing once. This was the first time I’d ever been in the bleachers at Wrigley, and I wanted to make sure I could explore fully.

I started off by running to left-center because there were a few righties taking turns in the cage. This is what it looked like out there: 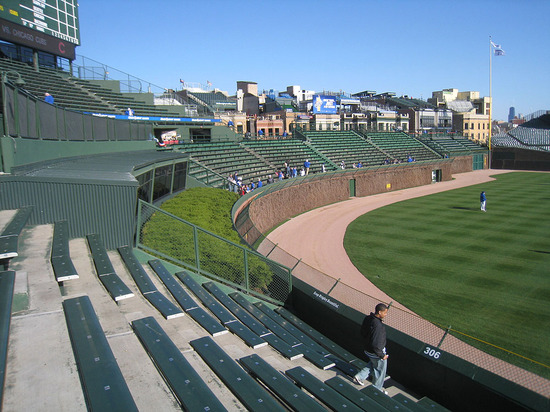 Then I ran a couple sections toward the foul pole and noticed that the ballhawks had moved to Waveland:

The bleachers were filling up fast. That’s because it’s general admission out there; everyone arrives early to claim a good seat. In addition to that fact, batting practice was dead. I kept moving back and forth for lefties and righties, but no one hit a ball within 100 feet of me.

When the Reds took the field, I moved over to my exclusive section down the right field foul line:

People with regular bleacher tickets couldn’t get in there, so there was truly NO competition: 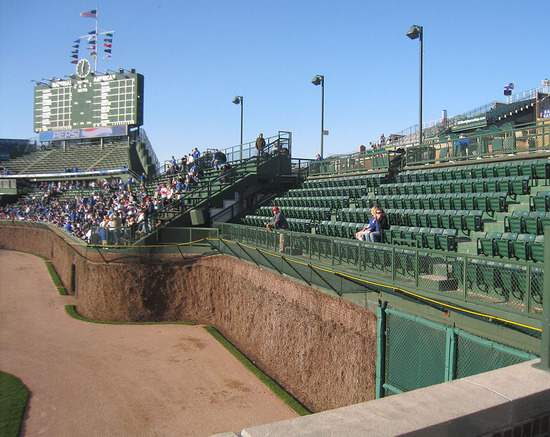 By the way, that’s me in the photo above, leaning on the railing and wearing a Reds cap. See those two ladies sitting to my left? I overheard one of them asking the other, “So wait, where’s home plate?” My friend Kelly was right when she said that most of the people in the bleachers don’t know that much about baseball and are really only there to hang out and get drunk.

My first ball of the day was tossed up by Arthur Rhodes (and let me just say that neither team hit a SINGLE ball into the bleacher box section). It rolled onto the grass in front of me while he was still playing catch. I didn’t bother asking for it until he finished throwing and walked over to pick it up. Too easy.

There were still a few Reds playing catch at that point, so I moved into foul territory and got two more balls within the next five minutes. The first was tossed by some guy that I couldn’t recognize–he recognized the fact that I was decked out in Reds gear–and the second was a glove trick masterpiece.

There was a security guard on the field, about 10 feet out from the wall and maybe 15 feet to my left. His job? To stare up into the seats and make sure that people were behaving. I’d heard that the guards at Wrigley did NOT allow fans to use ball-retrieving devices, so I was glad that this ball was right below me. Now…you know how a successful base stealer will study a pitcher’s pick-off move and look for tendencies? How long will he hold the ball? How quick is his move? Will he throw over three times in a row? Stuff like that. Well, I studied the guard in just the same way, and after a couple minutes I discovered his pattern of crowd surveillance. He would look at the batter for a moment (to make sure no one was hitting a line drive at him) and then he’d quickly look back and scan the crowd. Then he’d look back at the batter for about five to ten seconds…and then look back at the crowd. He did this again and again. The first look away was short. The second look away was long. I prepared the rubber band and magic marker and made sure my string wasn’t tangled. I knew I only had one shot, and even then, there was a good chance that the guy would stop me. Quick look at the batter. Quick look back. Long look at the batter…and then BAM…I went for it. Down went the glove. It dropped over the ball. The guard was still staring at the batter. If my band was on too tight or too loose, I was screwed. No second chances. The glove dropped over the ball, and I heard the crowd get excited. I slowly lifted it up, and the ball was inside. I looked at the guard…and then he looked over at me. CRAP!!! My glove was only about five feet off the ground at that point, and the guard immediately ran over to try to grab it. I kept lifting it…six feet…seven feet…and just as he made it over to me, I’d lifted the glove beyond his reach. HAHA!!! He immediately started yelling at me, and I disappeared into the crowd, took off my hat, and returned to the safety of my bleacher box section. I was so happy. I love sticking it to security when they make stupid rules that prevent true fans from taking home an extra baseball or two, especially when it’s for charity!

Late in BP, I got Jay Bruce to toss me my fourth ball of the day. Look how crowded the left field bleachers were at that point:

I moved back into the main part of the stadium at the very end of BP and nearly got Reds bench coach Chris Speier to toss me a ball. His aim was off, and it sailed two feet over my glove. (If I’d been allowed to go right down to the dugout, it would’ve been easy. He would’ve tossed it right to me. But no, thanks to Wrigley’s way-too-strict rules, I had to stay back in the cross-aisle, and since there were other fans crowding around me, Speier didn’t have an easy throw.)

I had about 40 minutes ’til the game was going to begin so I decided to head back to the bleachers and take a bunch of photos. I started by going down this staircase in the grandstand: 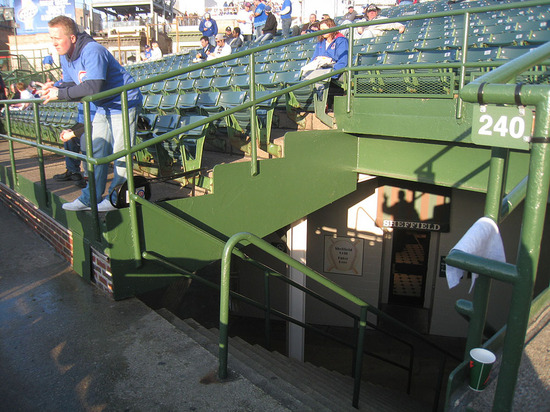 (Did you notice my shadow waving at you?)

The next photo was taken from that first staircase. See the ushers (wearing blue) in the distance? They had to re-scan my ticket in order for me to leave or re-enter the bleachers, and then I walked up that staircase near them:

At the top of the staircase, this was the view behind the bleacher box section:

Not a bad spot to run for home run balls, eh?

Down on Sheffield Avenue, people were lining up for one of the rooftops:

Look how much space there is (for home run chasing) behind the bleachers in straight-away right field:

I walked up the steps to the center field bleachers, then turned around and faced the right field foul pole and took the following photo: 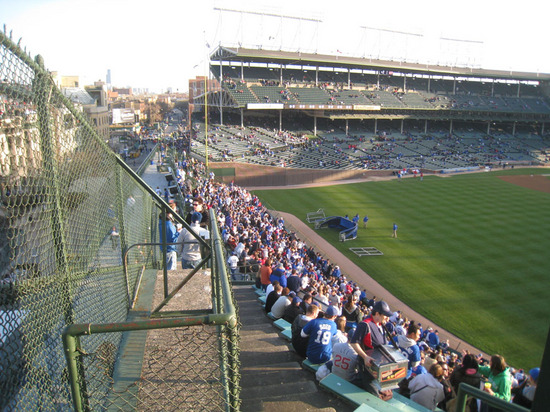 Here’s the area in the deepest part of center field, directly under the big scoreboard: 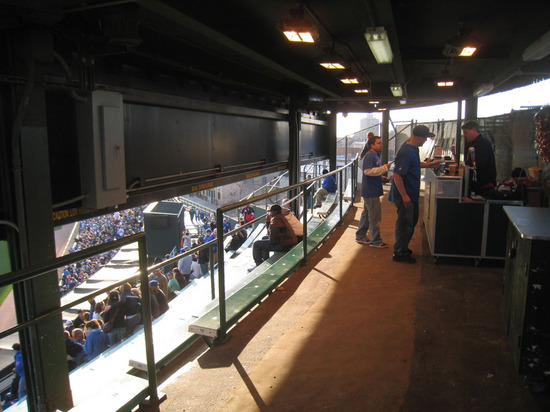 Here’s the view from behind the left field bleachers… 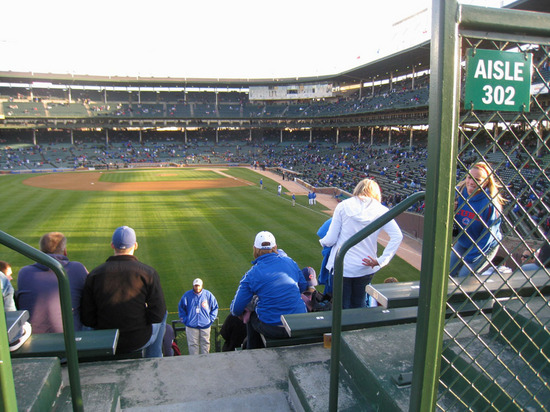 …and here’s the narrow walkway that runs behind it:

I don’t think that walkway would be good for catching home runs. It looks like the people sitting in the last row could easily catch (or deflect) all the balls before they’d reach it.

The area under the bleachers was, in typical Wrigley fashion, a maze of concourses and ramps and beams and chain-link fences.

If you’re standing below the right field bleachers, this is the view to the right… 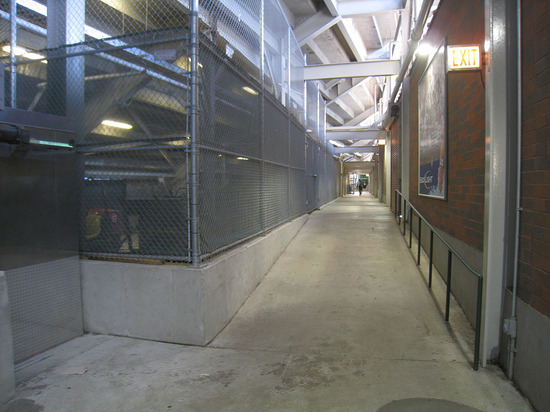 …and this is the view to the left:

Funky stuff, I tell ya:

Back up in the seats, I noticed that the rooftops were packed:

The entire bleacher area felt like one giant frat party. I’ve never seen so many 20-somethings drinking beer at a baseball game. People were standing everywhere, blocking aisles and ramps…wherever it was possible to see the field, people were there. It was actually kinda nice that security wasn’t policing it and just letting people hang out.

Was it a high-scoring affair with a bunch of homers to my empty section?!

Umm, no, the Cubs got shut out, 3-0, and the only longball was an opposite field shot by the left-handed hitting Jay Bruce in the top of the ninth, by which time I was already sitting here: 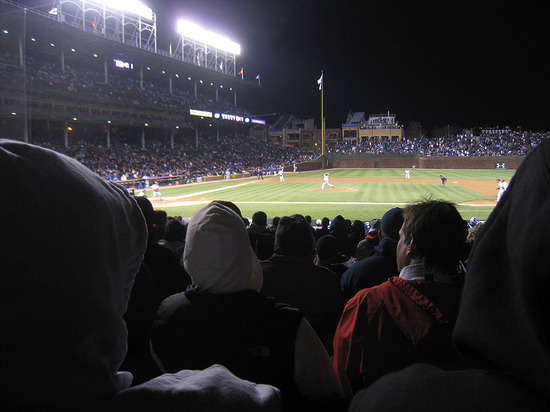 What a waste of a great ballhawking opportunity.

At least Ryan Hanigan tossed me a ball down by the dugout after the game.

• 578 consecutive games with at least one ball