If you’ve seen Mark Newman’s blog recently–specifically the entry called Snagged!–then you probably saw the press release that was issued by Pitch In For Baseball. It mentioned that I’ll 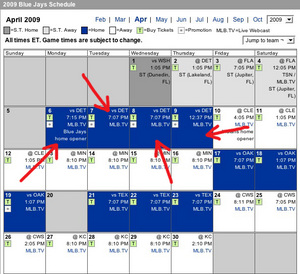 be in Toronto for the first four games of the season. One person even left a comment about it on my last entry, so it made sense to announce it here for everyone to see.

I booked the trip last week. I wanted to begin the season with a bang and jump-start my charity drive, and since the Tigers are going to be opening the season in Toronto, and since Gary Sheffield is on the Tigers and currently has 499 career home runs, the decision to go to Toronto (where flights are cheap and where I have a friend I want to visit anyway) was a no-brainer.

The official first-game-of-the-season countdown is now at 22 days. Unfortunately, the last game I’ll be seeing in Toronto is a day game, so there probably won’t be batting practice, and I just remembered that the gates at Rogers Centre don’t open until 90 minutes before game time (C’mon Canada, get it together!) but hopefully it’ll still be a good trip. Twenty balls in four games? That might be pushing it, but that’s what I’ll be aiming for.