I went to this game with one of my newer/favorite friends–a guy named Leon Feingold who happens to be a former minor league pitcher, a current member of Mensa, and a part-time competitive eater. He’s also pretty tall. Keep in mind that I’m 5-foot-11…

Although Leon hasn’t pitched in the minors since 1995, he’s still a dues-paying member of the APBPA (Association of Professional Ball Players of America) and we got special treatment as a result. Camden Yards is one of those stadiums that opens in sections; everyone is allowed to enter two hours early, but for the first half-hour, the left field seats are open only to season ticket holders. Leon used his membership card (and did a whole lot of smooth talking) to get us into left field as soon as the gates opened.

For the first five minutes, there was officially NO competition. Check it out:

I moved to the front row in straight-away left field and promptly caught a home run on a fly
(as Randor Bierd looked on). This ball has one of the largest and deepest scuff marks I’ve

ever seen. I’m guessing it was hit into the seats before the stadium opened and landed on a concrete step…then either bounced back onto the field or was tossed back by an usher. (I wrote the “3516” because this was the 3,516th ball of my collection.)

Over the next 20 minutes, about a dozen other fans made it out to the left field seats, and I snagged five more home run balls:

The first one landed in left-center and bounced up against the chain-link fence that separates the seats from the bullpen. The second one hit my glove and landed in an empty row behind me as I jumped and lunged for it. The third landed near me and several other fans, and I won the scramble as it rattled around in the seats. The fourth sailed 15 feet over my head and took an incredibly lucky bounce right back to me. The fifth landed in the seats, and I out-scrambled Leon and several other fans.

Then I got another ball–my seventh of the day–tossed to me by Dennis Sarfate (pronounced sar-FAH-tay).

Don’t feel bad for Leon. He brought his glove and snagged two home run balls during BP. He caught the first one on a fly and got a lucky bounce on the second. And don’t feel bad for the other fans. There were PLENTY of balls to go around, and I ended up giving away one of mine to a father and his young son who somehow managed to come up empty. It was ball-snagging heaven.

After the Blue Jays took the field at 5:30pm, I got my eighth ball tossed by Roy Halladay, then used my glove trick to snag No. 9 off the rubberized warning track, and broke double digits thanks to a little charity from Scott Downs.

If you take a closer look at the photo on the left, you’ll see a “Southwest Airlines” sign on the outfield wall, just above the head of the guy (Blue Jays pitching coach Brad Arnsberg) wearing No. 38. That wall is set several feet out from the base of the stands, so I sacrificed five minutes in left field and ran out there, just in case a ball had dropped into the gap when I wasn’t looking. I had to be slick about it, though. The day before Manny Ramirez hit his 500th career home run, a crazy usher had threatened to eject me for using the glove trick in that section, so I couldn’t just charge down the steps to the front row and lean over the railing. Therefore, I took my time…walked slowly…kept my glove hidden in my backpack…pulled out my camera…pretended to take some pics…casually made it down to the front…peeked over…moved 20 feet to my left…and took a pic for real. This is what I saw:

Unfortunately, I didn’t get anything else during BP, and I got ignored/dissed by Blue Jays manager Cito Gaston for a ball that almost anyone else in the world would’ve tossed to me. But why dwell

on the negative? Shortly before game time, I got my 12th ball of the day from a guy whom I correctly assumed was Donovan Santos, the Blue Jays “Strength and Conditioning Coach” (pictured on the right in the black shirt).

I spent most of the game with Leon, talking ab
out pitching and going for foul balls on the first base side of home plate. Nothing came close, and that’s probably a good thing because he probably

would’ve caught it. The day before the game, I asked him if he was planning to bring his glove and go for balls, and when he said yes, I asked what would happen if we were sitting together during the game and a foul ball came our way. I wanted to know if he planned to compete with me, and I got my answer: “You better eat your Wheaties tomorrow morning.”

I played the dugouts for third-out balls and got one from each side. Blue Jays catcher Rod Barajas flipped me the ball after Luke Scott took a called third strike to end the second inning…and Orioles first baseman Kevin Millar flipped me HIS ball after Matt Stairs grounded out to Brian Roberts to end the top of the seventh.

I jogged out to the right field standing-room-only section a few times over the course of the game, and and it’s a shame nothing came my way because that whole area of the stadium was a ghost town: 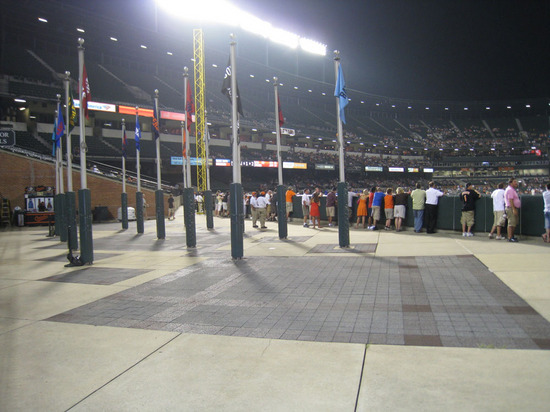 Still, I have two noteworthy things to report from my brief time in right field:

1) There was a fan wearing a T-shirt that said, “I AM KEEPING THE BALL.” Sadly, I didn’t get a photo, but I can tell you that it was a yellow shirt with the words stacked vertically. Very eye-catching. The back of the shirt said, “SEE FRONT OF SHIRT.”

2) At the foul-pole end of the standing-room-only section (you can barely see this in the photo above), the Orioles had one of several “ice stations” set up: 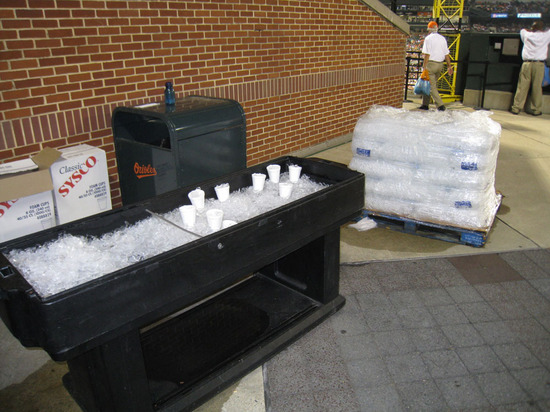 Given the fact that it was 97 degrees and stiflingly humid at game time…how awesome is that? I’ve been to over 700 games in 44 different major league stadiums, and I’ve never seen this before. Can you imagine an ice station at Yankee Stadium? HA!!! You’d have to pay 25 cents per cube (no discount for fragments) and store the ice in a clear plastic bag because, as everyone knows, a styrofoam cup can be used as a weapon.

The Orioles won, 8-3. Jesse Litsch, who’s never been nice to me, took the loss. Radhames Liz, who has a phenomenal name, earned the win. Brian Roberts hit his major league-leading 37th double. Yay.

After the game, Leon got a ball (thanks to my expert guidance) from home plate ump Tim Tschida, and I got a ball from Alberto Castillo (not this Alberto Castillo, but THIS one, although I *have* received balls from both) at the Orioles’ dugout.

? 29 lifetime games outside NYC with 10 or more balls

? 531 consecutive games with at least one ball

? 127 consecutive games outside of New York with at least one ball