Desperate times call for desperate measures. The cheapest ticket available at the window was $60 (or at
least that’s what the Yankees wanted me to believe) so I took a proactive approach… 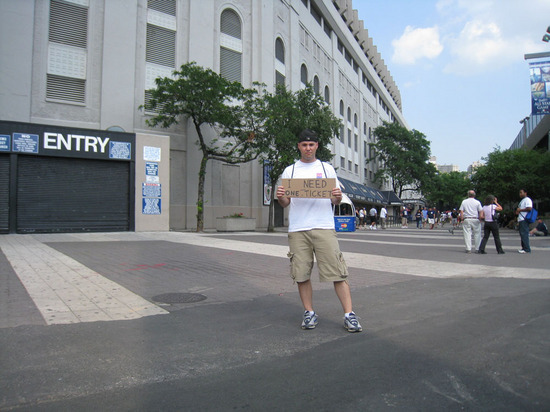 …and found my way inside for $30. That still might sound like a lot, but when the cheapest seat in the entire stadium (bleachers excluded) has a face value of $22, it’s actually not terrible.

Anyway, batting practice was bad news all around. To start things off, a woman on the lower level (who was not paying attention, of course) was hit on the side of the head by an A-Rod slicer and needed medical attention: 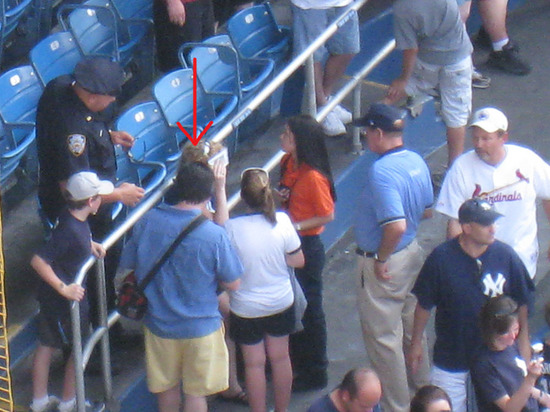 Then, to make matters worse, the brilliant Yankee staff failed to move her out of harm’s way, and she nearly got hit again! I also saw two little kids nearly get taken out by line-drive home runs in the upper deck. The first kid was wearing a glove but had no clue how to use it, and the second kid was sitting with his father who didn’t even see the ball coming. That ball missed his head by six inches and truly might have killed him. I don’t understand how parents can be so careless and dumb. There are plenty of places in the stadium where balls can’t go. If the grown-ups don’t care about catching one and the kids aren’t coordinated enough to protect themselves, why not sit there?

Those two home runs, by the way, were the ONLY two home runs that reached the upper deck in eighty minutes of BP. Thankfully, while the Yankees were on the field, I got a commemorative ball thrown by Joba Chamberlain… 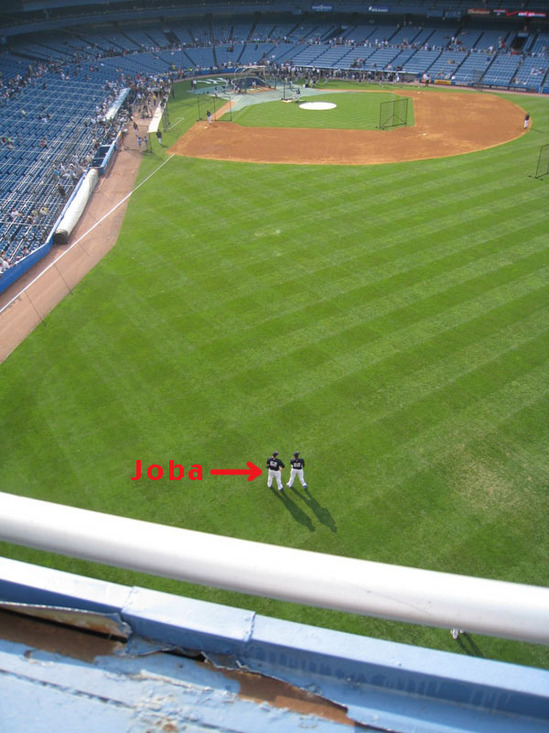 …and when the Rays came out, I got a regular ball from Edwin Jackson.

I stayed in left field for the whole game, and nothing came anywhere near me. Jeter’s 200th career homer? Didn’t happen. Arod’s 537th (passing Mickey Mantle on the all-time list)? Ditto.

The funny (and yet sad) moment of the night occurred when Jose Molina came up to bat and the Jumbotron said he had thrown out the last 12 base-stealers and had “not allowed a SB since June 3rd.” The woman behind me asked her male companion what “SB” meant.

“Second base,” he told her.

Scott Kazmir pitched well, giving up two runs and striking out nine in five innings–but Andy Pettitte pitched much better, surrendering just four hits in eight scoreless frames as the Yankees cruised to a 5-0 win. Guess who got the game-ending ball from reliever Edwar Ramirez. Rudy freakin’ Giuliani. That’s who. He had the corner seat in the front row next to the dugout (How the hell am I supposed to compete with that?) and then got to bring his little entourage out onto the field for a photo-op: 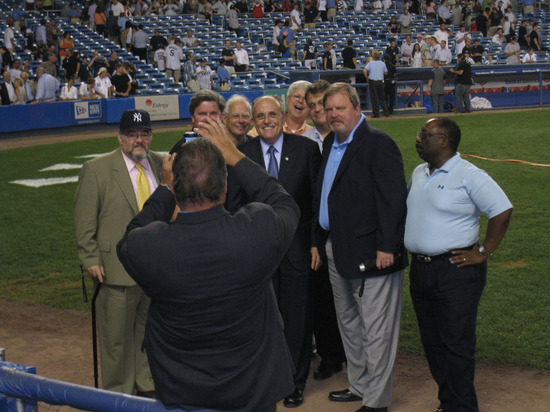 Before I wrap up this entry, I want to give a quick shout-out to a young Yankee fan named Jon Herbstman (aka “karenherbstman” if you read the comments) who spotted me late in the game as he was walking past me in the concourse. First he did a double-take…then a triple-take…then a quadruple-take before stopping and making a U-turn and walking over and staring at me and saying incredulously, “Are you Zack Hample?!” It was priceless. And when I said yes, he shouted at his dad to stop walking and asked for my autograph. It was a nice end to an otherwise slow and forgettable day.

Oh wait, one more thing…
I finally got around to scanning the article about me that appeared in the Palm Beach Post. Here it is.

? 528 consecutive games with at least one ball

? 117 consecutive games at Yankee Stadium with at least one ball