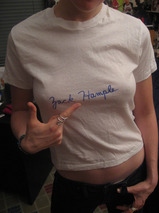 My girlfriend reads this blog, and when she saw the previous entry, she got a bit jealous and wanted me to sign her shirt too.

ANYWAY…
I have a few more links to share, starting with three stories I wrote last week for MiLB.com. For the first one, I interviewed a former Major Leaguer named Paul Runge who’s currently managing the Danville Braves of the Rookie Appalachian League. For the second, I talked to a minor league pitcher named Kyle Schmidt who made a dominating start for the Class A Delmarva Shorebirds. The third is just a brief recap of a Mexican League playoff game. Nothing fancy. Just kinda cool that I got to cover it.

More links…
There’s a site I recently stumbled upon with news updates about everything related to the world of sports memorabilia. It’s called Sports Collectors Daily and you should definitely check it out.

My book got a nice plug from an unlikely source: Vera’s Crafty Blog.

In case you never got to see a hard copy of the “USA Today” article, here it is on my web site.

I didn’t go to Philadelphia yesterday, and I’m not gonna make it to Shea today. Stupid sore throat. I’m not getting enough sleep.